Malta PM to Resign in January 2020

Maltese Prime Minister Joseph Muscat said he will step down next month amid the growing potlicial turmoil surrounding the investigation into the murder of journalist Daphne Caruana Galizia. 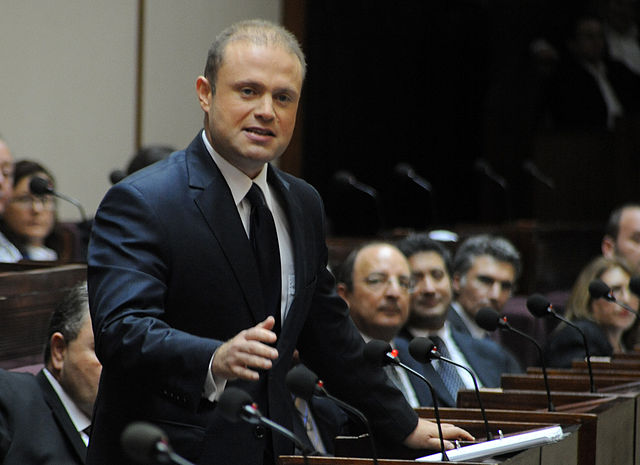 Maltese Prime Minister Joseph Muscat said he may step down in January 2020. (Photo: Partit Laburista Malta (CC BY-SA 3.0))Muscat addressed the nation Sunday after nearly 20,000 people protested in the capital of Valletta, demanding his resignation. He said he would step down “a few days” after a new Labour Party leader is selected in an electoral process in January.

In a short statement to the press on Monday, Muscat said he will “limit” himself to day-to-day operations of running the government, according to the Times of Malta.

Caruana Galizia was killed by a car bomb in October 2017, eight months after she blogged about the Panama Papers leak, alleging Dubai-based 17 Black Ltd. was linked to some top Maltese politicians.

The owner of 17 Black, Maltese businessman Yorgen Fenech, was arrested Nov. 20 on his yacht, while sailing away from the island. He has been charged with participating in a criminal organization, complicity in the causing an explosion, and complicity in the murder of Caruana Galizia. He has pleaded not guilty, according to published reports.

Fenech was arrested one day after an alleged middleman, Melvin Theuma, was offered a pardon in exchange for identifying the mastermind behind Caruana Galizia’s murder, reports said.

Fenech allegedly paid Theuma 150,000 euros (US$165,000) to “distribute to three men to carry out Daphne Caruana Galizia’s murder,” according to the Times of Malta, citing unidentified sources close to the investigation.

The three men were arrested as suspects a few weeks after the journalist’s murder. Vincent Muscat and brothers George Degiorgio and Alfred Degiorgio have been charged with carrying out the killing. They have pleaded not guilty.

According to the Panama Papers’ leak in 2016, Schembri established the Tillgate Co. in Panama, and Mizzi formed his company Hearnville Inc., also in Panama, through the law firm Mossack Fonseca. Both were mentioned in Caruana Galizia’s reports.

Although Mizzi denied any connection with Fenech, 17 Black had been listed as a target client of Mizzi and Schembri’s Panama companies.

Although the prime minister announced his resignation, his Labour Party confirmed its unanimous support for him. It also reinstated Cardona as minister, less than a week after he resigned from the post.

Cardona was suing Caruana Galizia at the time of her death over her report that he had been seen at a brothel in Germany while on official government business in January 2017.