Croatian police rescued nine illegal migrants from a screwed-down wooden crate Tuesday after stopping a van with Polish license plates near the country’s eastern borders with Serbia and Bosnia and Herzegovina, police said in a statement. 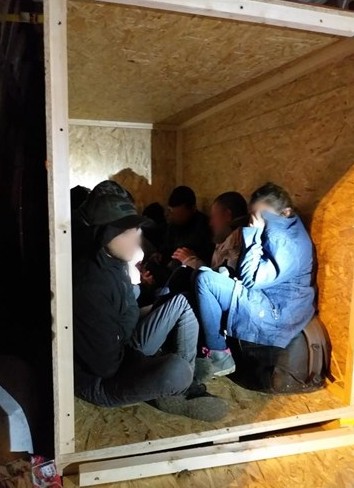 Migrants from Iran and Iraq rescued from a screwed-down wooden crate in Croatia (Photo: Croatian Interior Ministry)During a routine check of the vehicle - a Volkswagen Crafter - police noticed a wooden crate usually used for machinery parts in the back.

“The crate was sealed by screws and disturbing voices of several people could be heard from it,” read the statement.

Police opened it to find three men, two women and four minors. They believed they have saved them from suffocating, as the air in the crate was “heavy, warm and stale.”

The illegal migrants - seven Iranian and two Iraqi nationals, were given medical assistance, while the driver, a 21-year-old Ukrainian citizen, was detained.

The Iranians, according to the statement, asked for international protection, while the Iraqis refused that possibility, and were transferred to an immigration center and will be subject to readmission procedures.

Police said they also detained two Polish citizens on the opposite side of the country, at the Macelj border crossing, between Croatia and Slovenia, who they suspect were involved.

One of the smugglers reportedly tried to run over a policeman, then escaped, but was later arrested on the Slovenian border.

The number of human trafficking attempts is rising with the escalation of the migrant crisis in the Balkans.

More than 19,500 illegal migrants have entered BiH this year, with the constant presence of 3,500 to 5,500 migrants on the country’s west, near the Croatian border, Slobodan Ujic, director of the Service for Foreigners' Affairs told Sarajevo daily Oslobodjenje.

Ujic also confirmed that Bosnian police agencies continually work on discovering and breaking up the networks smuggling migrants to the EU countries via BiH.

About two weeks ago,  OCCRP reported that police cracked a migrant smuggling gang. Europol announced then that authorities in the Western Balkans arrested 10 suspects of an organized crime group smuggling migrants across borders.

During the Operation Hugo/River/Mordana, conducted between July and October, police from Slovenia, Bosnia and Herzegovina, Italy and Croatia, backed by Europol, identified more than 150 migrants illegally transported from Slovenia to the southeast of the Balkans and then into Italy. The smugglers were charging each migrant €100-1,000.

Glas Slavonije news quoted the Croatian Interior Ministry in reporting that 620 human traffickers were detained last year and 344 more in the first half of this year.