Nigerian anti-corruption officials discussed on Tuesday how to effectively combat graft in the country’s ports, which annually lose up to 2.5 trillion naira (US$6.89 billion) to “negative operational elements,” according to the August Ports User Survey Report from the Convention on Business Integrity. 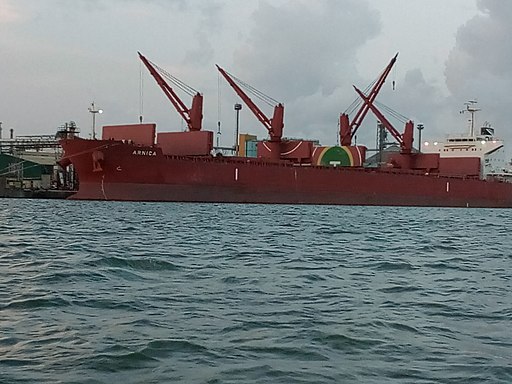 A ship in Apapa Port, Nigeria's largest sea port (Photo: Quadrex24, CC BY-SA 4.0)The meeting was meant to assist in “the launch [of] a series of interventions aimed at promoting transparency and the consistent application of Standard Operating Procedures leading to more predictable (in time and cost) vessel and cargo clearance at the Ports & Terminals,” per an event press release.

The host of the event, the Maritime Anti-Corruption Network, or MACN, is devoted to achieving “a maritime industry free of corruption that enables fair trade to the benefit of society at large.” It is an international organization with over 100 members, according to their main website.

Given Nigeria’s enormous population, the ports lack the necessary infrastructure to properly monitor all transactions, according to the CEO of the Center on Business Integrity, Soji Apampa.

When the port system was designed, “Nigeria’s population was maybe less than 40 million, today we are talking about 200 million, and we haven’t continued to review the infrastructure,” he explained.

“Both the access to the infrastructure, in terms of access roads, and the capacity of the equipment that we’ve got in there. It hasn’t quite kept pace with population growth, and linked to the population growth, is the volume of transactions that are taking place at the ports,” Apampa said for the Business Morning program of Nigeria’s Channels TV.

In discussing the main findings of the Survey Report, Apampa said most Nigerian port users understand standard, legal operating procedures, and know where they can make complaints if their vessels or cargo are not cleared. There are drawbacks, however.

“But one of the major findings has been that in this process, there’s been too much discretion, or room for discretion, allowed to officials at the ports, and that this wide discretion is giving opportunity for a lot of corruption to also occur at the ports,” Apampa stated.

Corruption remains a huge problem in West Africa, and Nigeria is only the 144th least corrupt nation out of 180 ranked countries, according to Transparency International.