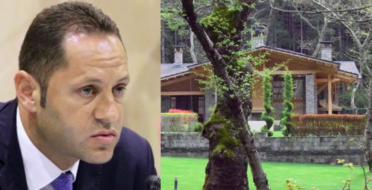 Deputy Economy Minister Alexander Manolev and his vacation home (Photo: Bivol)The District Prosecutor's Office in Blagoevgrad announced on Monday that the two will face the court for "presenting false information in order to receive funds belonging to the European Union."

Dimitrova applied for a grant in 2013 under the Rural Development Program 2007-2013 for the construction of a guest house in the area of ​​Sandanski. She allegedly received the EU funds based on false information she submitted, according to prosecutors.

After building the house, Dimitrova delivered the invoices, portraying them as the costs of the investment project, although the house was constructed for the personal needs of the other accused, the statement said.

Manolev, as a partner in crime, was accused of ‘’inciting and aiding and abetting Dimitrova as the perpetrator.’’

Manolev resigned in April 17, when the prosecutor's office announced it will look into the case, following the publication of an investigation by OCCRP member Bivol, which suggested that he used a guesthouse built with EU money as his own private vacation home.

Manolev denied wrongdoing. The court is yet to announce the date of the hearing.