Mexican courts have exonerated 24 individuals suspected of involvement in the 2014 disappearance of 43 students, the Undersecretary of Human Rights, Alejandro Encinas Rodríguez, announced in a Sunday press conference. 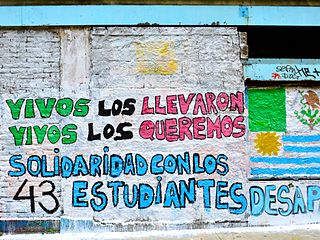 Graffiti in support of the 43 students (Photo: Sortica, CC BY-SA 4.0)Initially, authorities had arrested 142 people for the abduction. With the latest exoneration, a total of 74 detainees have been freed, Encinas stated.

“The resolution of Judge Samuel Ventura Ramos to liberate the 24 accused in the disappearance of the youths of Ayotzinapa is an affront to the victims and parents and shows the misery of the Justice System in the country,” Encinas wrote in a Twitter post following the conference.

In 2014, the 43 teacher trainees were attacked and arrested by corrupt police in the southwestern city of Iguala while bussing to a demonstration in Mexico City. The police then gave the students to a local gang that probably killed them and disposed of their remains, according to Reuters.

The mass abduction severely undermined the reputation of former president Enrique Peña Nieto, and has prompted the current president, Andres Manuel Lopez Obrador, to criticize the officials who handled the initial investigation.

The Attorney General’s Office has since ordered the case to be revisited.

“Since the criminal acts of September 26 and 27, 2014 occurred, the investigation of the Ayotzinapa case was permanently discredited, as much by public opinion as by the parents and relatives of the victims,” read a Saturday press release from the Attorney General’s Office.

In the probe, suspects alleged they had been tortured into making confessions, and the UN Human Rights Office denounced the authorities’ use of torture and cover-ups in a 2018 Executive Report on the incident.

The remains of only one student have been positively identified so far. The arrested leader of the gang suspected of the kidnapping, Gildardo Lopez Astudillo, has been freed, and no suspects have been convicted.