Ex-Kyrgyz President: I’ll Fight Back if Police Come to Arrest Me

As Kyrgyzstan's Parliament voted to strip former president Almazbek Atambayev’s immunity, he was busy barricading himself in his house, threatening to shoot at police if they came to take him away. 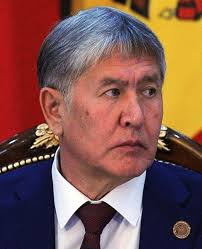 Former President Almazbek Atamaev (By: Russian Presidential Press and Information Office)Parliament voted 103 to six in favor of lifting Atambayev’s immunity on Thursday, two days after the prosecutor-general came out with six charges against Atambayev linked to illegal land purchases and corruption while in power, according to France 24.

Atambayev is the latest official to be charged with corruption. Two of his former prime ministers and close allies have been arrested in connection to several corruption cases, according to Radio Free Europe.

France 24 reports the charges against Atambayev may be politically motivated by his opponent and current president, Sooronbai Jeenbekov.

Atamayev told media on Wednesday that he has a gun and a rifle and is ready to defend himself if the police come to arrest him. A Radio Free Europe video shows construction trucks dumping rocks at the gates of Atambayev’s house and supporters setting up yurts.

“I’ve never thought that a criminal case could be based on rumors and filthy fantasies or that the prosecutor-general could subserviently legalize this nonsense within a day,” Atambayev told media on Wednesday.

Atambayev denies any wrongdoing and insists the allegations are politically motivated.