by Pavla Holcova, Vlad Lavrov and OCCRP Tajikistan
Tweet this Share this on Facebook DONATE
Above: The historical building at the heart of Karlovy Vary (center), which Amonullo Hukumov's wife Amina Musaeva bought in 2014 for $4.4 million. Credit: Pavla Holcova

Amonullo Hukumov, the former head of Tajik Railways, has told the media that neither he nor his wife own any real estate abroad. But records obtained by OCCRP show that his family has spent over $10.6 million on luxury real estate in two of the Czech Republic’s most popular tourist destinations. The hefty price tag raises questions about the source of the family’s wealth.

Neither scandals nor forced retirement have slowed down the Hukumov family’s real estate purchases.

The wife and children of Amonullo Hukumov, once the powerful head of Tajik Railways, own six properties in Karlovy Vary and Marianske Lazne, Czech resort towns known since the Soviet era as exclusive vacation spots for the elite.

Since buying their first property in December 2012, the Hukumovs have spent about US$ 10.6 million on two houses and four other buildings, including apartment and rental properties, according to sales contracts obtained by the Organized Crime and Corruption Reporting Project (OCCRP). The family’s only other known foreign property is a Moscow apartment valued at $1.1 million. 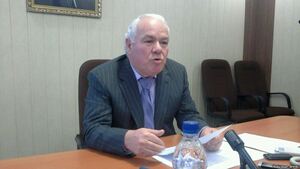 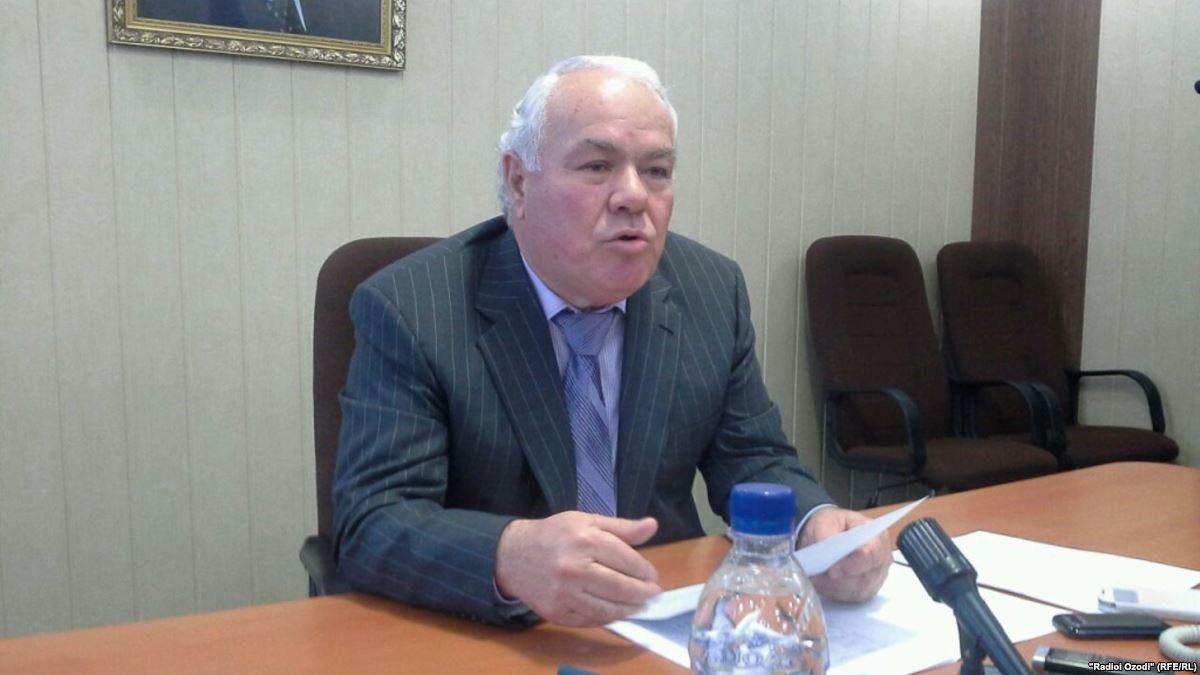 Hukumov, 66, who also goes by the Tajik version of his family name Hukumatullo, retired from his position in February 2014, following controversy surrounding the arrest of one son for trafficking heroin and a speeding accident involving the second son that resulted in the death of others.

He has denied that he or his wife own properties in the Czech Republic, and their ability to acquire such impressive assets is hard to explain, given Hukumov’s role as a public official. According to governmental sources, state officials generally do not earn more than 5,000 Somoni ($625) per month.

His wife, Amina Musaeva, 57, owns a company that distributes Russian weapons and a construction service company in Dushanbe, Tajikistan’s capital, but little else is known about either of her businesses.

In June 2016, Hukumov denied that he or his wife own any real estate in Karlovy Vary.

“I’m not in the Czech Republic … I’m in Tajikistan”, he said in an interview with Radio Ozodi, Radio Free Europe/Radio Liberty’s Tajik Service.

Credit: Pavla Holcova The building on the hill above the downtown of Karlovy Vary bought by Amonullo Hukumov's family in 2015. 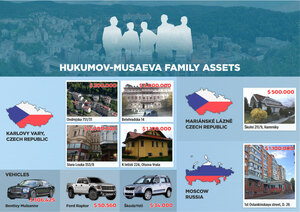 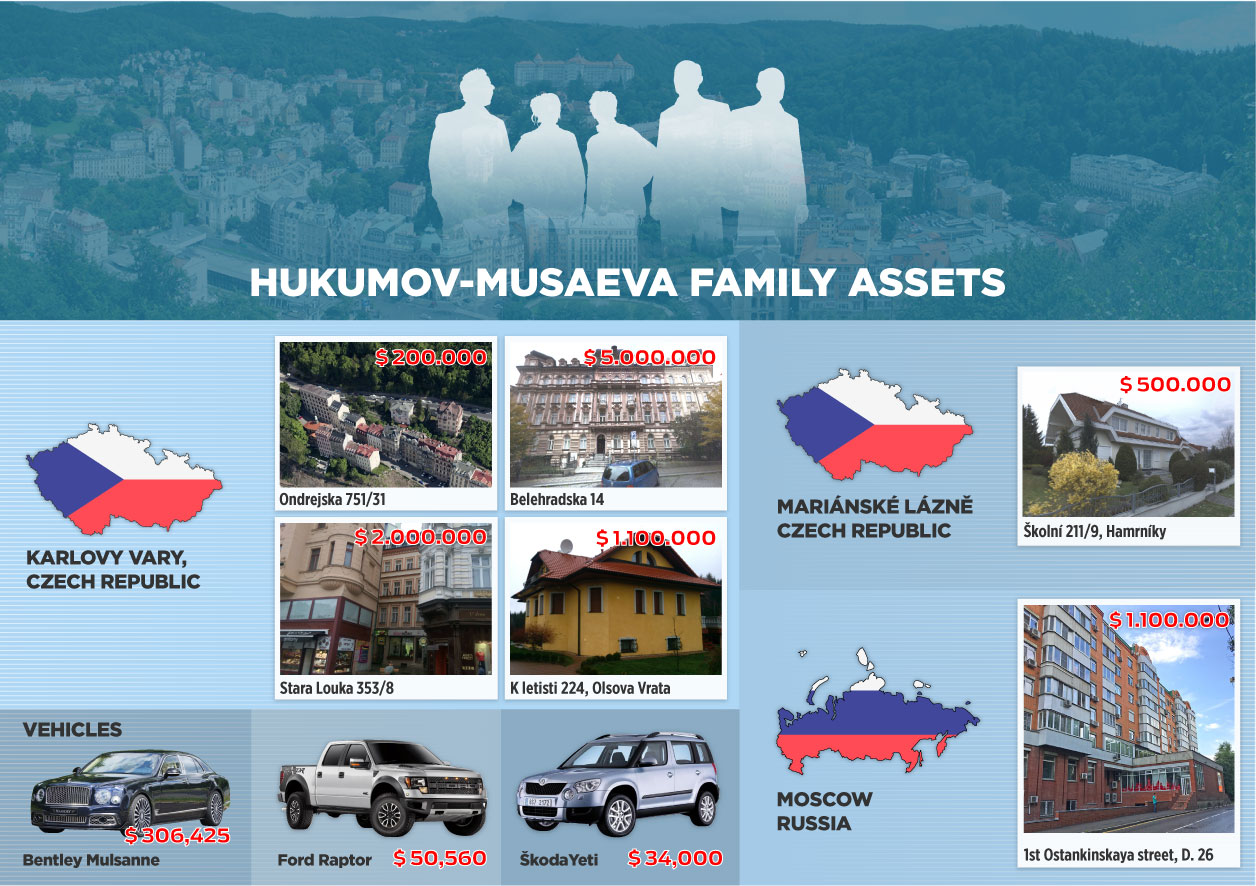 Hukumov’s political career began in 1995, a few years after President Emomali Rahmon came to power. Hukumov is variously referred to in Tajik media as either a relative of Rahmon, or a family friend or close friend to the President but OCCRP could not confirm. He became a member of parliament and the later head of Naftrason, a state owned oil import company. In 2002, he was appointed head of the Tajik Railways. He received a disability pension from the state after his resignation claiming he suffered from diabetes.

While the salary of Tajikistani public officials is not considered public information, the size of Hukumov’s pension became household gossip in the country in early 2015, when President Rahmon criticized inflated disability pensions received by some disabled state officials.

As it turned out, Hukumov was receiving some of the highest pensions in the country – 8,400 Tajik Somoni ($1,200) per month, or more than 37 times higher than the country’s average pension.

During Hukumov’s reign as head of the railroad, it was well known as a major drug smuggling conduit for heroin travelling from Afghanistan to Russia according to the United Nations Office on Drugs and Crime (UNODC). In 2010 and 2011, more than 500 kilograms of heroin and other opiates were been found on trains originating in Tajikistan. A number of railroad employees have been arrested starting in the 1990s.

Representatives of the Hukumov family declined to comment for this story.

From Moscow Prison to Czech Luxury 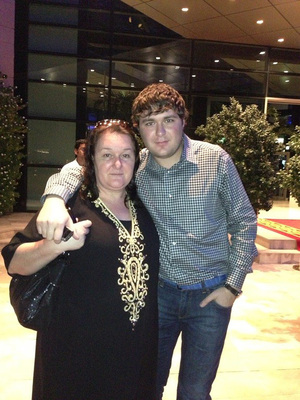 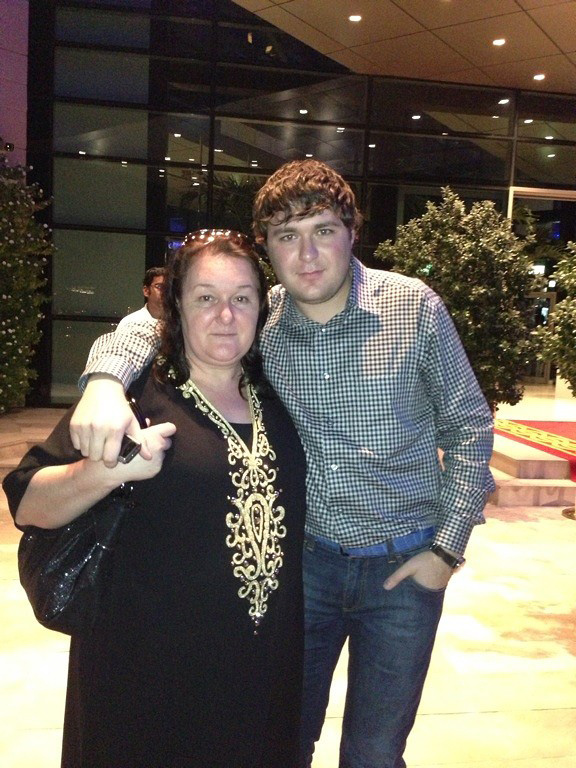 The Hukumov family’s shopping spree for Czech property began in December 2012 with the purchase of a two-story house in a residential neighborhood of Marianske Lazne, a picturesque spa city in West Bohemia, surrounded by mountain forests, mineral springs, and green parks.

No one was home when reporters visited the house this past summer. There was no name on the doorbell or mailbox, no car parked outside, and the venetian blinds were shut. But the lawn was freshly cut and the roses well-tended.

Living in a luxurious home in a Bohemian spa town would have been a stark contrast for Rustam from his previous year which he served in a high security prison in Russia for the illegal sale of drugs.

Rustam was arrested with three others in June 2008 and charged with attempting to sell 9.3 kilograms of heroin in Moscow. Two years later, he was sentenced to nine years and six months in prison and fined 250,000 rubles (almost $8,100 at the time).

Rustam was found guilty of being one of two organizers of a criminal group. The court found that he had provided the group with mobile communications and transportation.

A higher court confirmed his verdict in December 2010. But a year later, the verdict was unexpectedly reversed and he was set free. According to RosPravosudiye, the Russian registry of court cases, the cases against his accomplices were not reconsidered.

Hukumov’s acquittal mirrored a similar decision made in Tajikistan at around the same time. One month prior, a Tajikistani court freed a Russian and Estonian pilot who had been sentenced to eight-and-a-half-years in prison for smuggling and illegally entering the country. Tajikistani and Russian media speculated that the two countries had traded the criminals, though the Russian Foreign Ministry denied any links between the two cases.

The Hukumov’s house in Marianske Lazne was not the first property the family bought abroad. Two years before Rustam’s arrest in Russia, in May 2006, they bought a 100-square-meter apartment in a new building near a massive Soviet-built exhibition center in northern Moscow. Rustam was registered as the owner.

In December 2009, a year and a half after his arrest, Rustam sold the apartment, worth 34 million rubles ($1.1 million at the time) to his sister Zarrina.

The family’s main house in the Czech Republic sits in a large garden in Olsova Vrata, a district on the outskirts of the spa town of Karlovy Vary. The house is located near an airport with scheduled flights to Moscow. A statue of Yuri Gagarin, a Russian cosmonaut and the first man in space, greets visitors in the parking lot.

Credit: Pavla Holcova The main house of Amonullo Hukumov's family located in the outskirts of Karlovy Vary bought by Amina Musaeva in 2013 for $1.1 million.

The house was bought by Hukumov’s wife Amina in April 2013 for $1.1 million. It came fully equipped with antique furniture, gold framed paintings, a porcelain statue, curtains brought from Italy and surveillance cameras.

When OCCRP reporters visited the property, it was not being use, and the mailbox was full of advertisements.

Neighbor said the family is not permanently living here. “I barely know them, I am not even sure, what is their name. I only have their phone number for cases something would happen.” 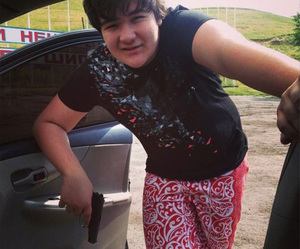 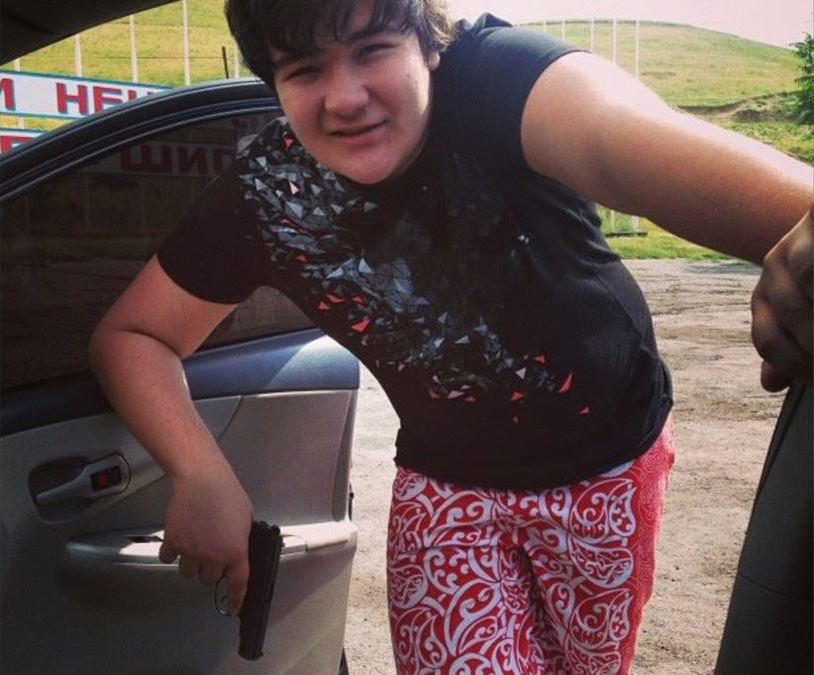 Amina bought the house at a what was likely a stressful time in her life.

In October 2013, her son Rasul, who was 16 at the time, caused a car accident in Dushanbe while driving his BMW without a driver’s license, which left three people dead and three injured. The police initially claimed that he had been speeding and had caused the accident. Nine months later, however, the police changed their mind, saying that, after conducting seven expert examinations of the accident, they had found Rasul innocent.

Instead, his parents were charged with a “lack of responsibility in upbringing and teaching of children.” The mother was ultimately found guilty of negligence in fulfillment of her duties of raising underage children for letting her son outside the home at night and unchaperoned at 2:30 am, when the accident took place. The court in Dushanbe found her guilty and fined her 120 Tajik Somoni ($25 at the time).

Not long after Amonullo Hukumov’s retirement from the railroad following his sons’ scandals, the family bought a historical building located directly in the heart of the world-famous spa town of Karlovy Vary, on the iconic Hot Spring Colonnade on the banks of the river Tepla.

The Colonnade, one of five in the city, is a famous tourist attraction where hundreds of visitors come daily to enjoy the alleged curative benefits of the 15 mineral springs Karlovy Vary is well known for.

The five-story building with 10 apartments is rented by the EA Hotel Esplanade, a hotel operated by the EuroAgentur Hotels & Travel, which claims to be the Czech Republic’s largest hotel company.

The Hukumov family also bought another building on the slope above the center of Karlovy Vary in May 2015 for 4.5 million CZK ($184,000).

The building was renovated and features a bright yellow facade, newly painted windows and walls.

Almost two years ago, the Hukumov family bought two additional properties in Karlovy Vary. In March 2016, Amina bought two buildings in the business district of Karlovy Vary for €4 million (at the time $4.3 million). The two ornate five-story buildings were built in a neoclassic style and decorated with floral reliefs, balconies and columns.

Two decades ago, one of the buildings was used as a bank, according to the receptionist. These days, the offices are rented to attorneys, a furniture shop, a plastic surgery clinic, and a fertility clinic with its own operating theaters and inpatient department. 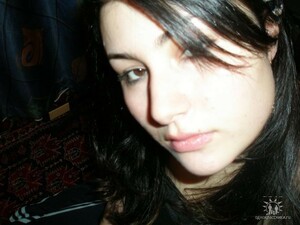 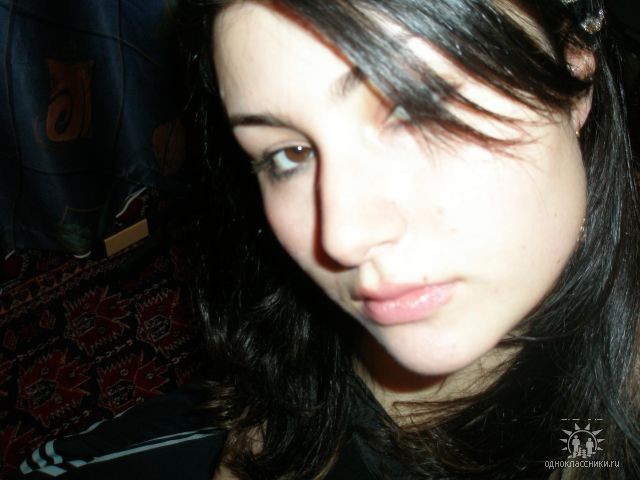 In July of 2016, Amina gave the building to her daughter Zarrina, but with a clause that read: “The recipient is aware of the fact that the donor can appeal (the donation) in case of need or in case of ingratitude.”

In June 2013, Hukumov’s wife Amina established a real estate business in the Czech Republic. Originally, it was called MUS.AMINA and later renamed to Goldpari s.r.o.

It is not known how much the family is now earning from the rent on their properties.