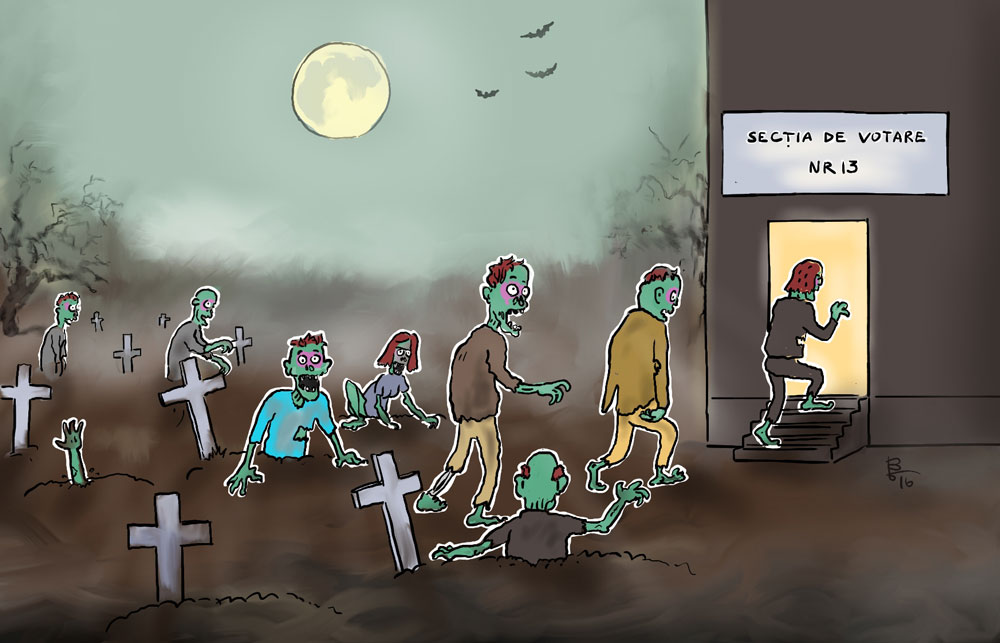 It’s a grave matter. About 2.8 million Moldovans are listed on the official electoral roll for the country’s Oct. 30 presidential election. But Organized Crime and Corruption Reporting Project (OCCRP) partner RISE Moldova has found that many approved voters have already departed this earth.

Fanning out to cemeteries around Chisinau, reporters checked more than 300 gravesites and found nearly 100 of them contained people on the list of approved voters. The dead souls include the father of the man tasked with validating the election results, Constitutional Court President Alexandru Tanase. Other notable undead voters include film director Emil Loteanu and actor Mihai Volontir.

For years, people have raised questions about Moldova’s voter list. Despite a population that has fluctuated as large numbers of Moldovans emigrate abroad for work, the number of eligible voters has ticked steadily upwards.

Yet the country’s struggling economy makes it difficult to get a clear picture of how many Moldovans should be on the voter list, as people who migrate abroad for work often do so illegally (as many as 80 percent, according to some estimates). According to a 2012 analysis by the International Organization for Migration, one-quarter to one-third of the working age population were working abroad between 2005 and 2010. Official government statistics say that as of 2015, about 325,000 Moldovans were either working or looking for work abroad; other estimates range as high as 1 to 2 million.

On Aug. 22, the CEC released its official voting list for the upcoming presidential election. Armed with it, reporters for RISE Moldova went to two Chisinau cemeteries: the country’s largest, Saint Lazarus; and the Central Cemetery, where Moldova’s political, cultural and business elite are buried.

Reporters focused on those who had died between 2014 and 2016, but also took note of some who had died as long as 15 years ago. They took pictures of headstones and tombs to record the first names and family names of the dead, as well as the dates of their births and departures.

The reporters’ goal: to see if any of the names on the CEC’s list matched those on tombstones.

Among those buried here is Valentina Drangoi, who is cleared to vote on Oct. 30, 2016, at polling station 1/041 at Mihai Eminescu Lyceum, in Chisinau’s Botanica district. As she has been dead for 15 years, she could have voted in 10 local and national elections since 2003. 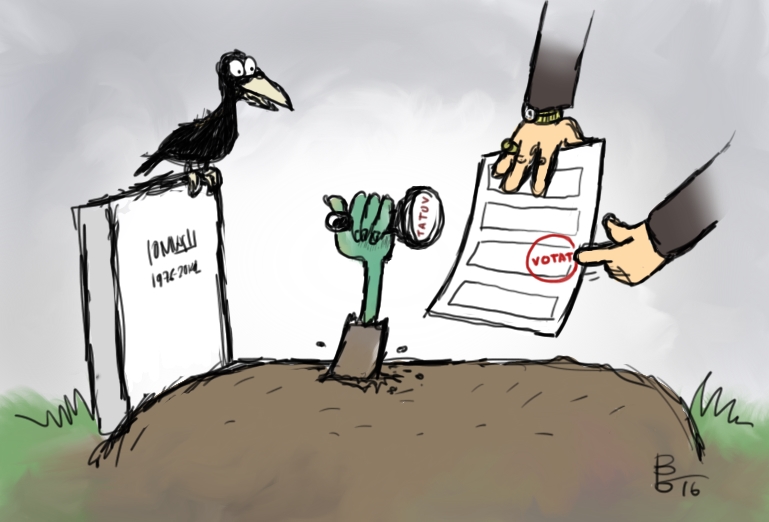 (Image: RISE Moldova)Nearby is the tomb of actor Mihai Volontir, who died on Sept. 15, 2015. Not far away is the final resting place of singer and composer Anatol Dumitras, who died last summer. Both are on the voter list.

There aren’t many new graves. Olga Roschinskaya, who died last year, is resting next to Valentin Velicovici, who died this year. They are registered to vote at polling station 1/133 on Drumul Viilor St. 26A, inside Chisinau’s State University of Tiraspol.

Reporters located the grave of journalist Constantin Tanase, father of Alexandru Tanase, the President of the Constitutional Court. Although it’s been two years since the elder Tanase faced the highest judge of all, as of Sept. 7 his name remained on the voter list.

RISE reporters also checked St. Lazarus Cemetery against the voter list, again focusing on people who died between 2014 and 2016. Between the two cemeteries, they found nearly 100 permanent residents who had not yet been removed from the voter roll.

Emil Loteanu and the Shame of Iurie Ciocan.

The name of Emil Loteanu, the great Moldovan film director buried at the Vagankovo cemetery in Moscow in 2003, still appears on the electoral rolls.

Iurie Ciocan, the former president of the CEC, said that this situation is embarrassing but not the fault of elections officials. Loteanu is still on the list “because relatives have not legalized the death certificate issued by the Russian authorities at the population registration body in Moldova” in order to remove his name, Ciocan said.

Ciocan, who is still a member of the CEC, said that the list may include even more of the dead than those unearthed by RISE reporters, but it doesn’t necessarily follow that their names will be used for fraudulent voting.

Voters are listed by both name and personal ID number, he noted. To vote, they must show up at the polling place with their passports showing the proper name and number; the fact that they vote is then permanently recorded in each passport, so they can’t do so more than once.

In 22 years, Half a Million More Voters.

As of Aug. 22, the CEC said, the total number of Moldovans eligible to vote was 3,237,032 people. This number represents citizens who hold residence permits in Moldova, whether they live in the country or not.

Of that total, 2,853,802 citizens were assigned to voting stations.

The rest – more than 383,000 – included 161,630 people classified as non-residents and another 221,600 who live in Transnistria, which is not under control of the central government and does not participate in Moldovan elections.

Alina Rusu, the CEC president, said that these numbers come from the State Registrar of Population (RSP) which tallies the entire Moldovan population; over the past two decades, that total has grown by about half a million.

In subsequent elections the number of voters oscillated between 2.3 and 2.4 million until the parliamentary election of 2009, when the CEC decided to add to the list all holders of Moldovan residence permits, whether living at home or abroad. That increased the total to 2.7 million and sparked protests from opposition parties and some civil society organizations, who said the CEC must be counting dead people to come up with such a big increase.

CEC member Ciocan believes, however, that a few dead voters on the list are not significant.

“Are there any dead people listed?” he asked rhetorically. “Probably yes. But neither before 2009 nor after has there been a case that demonstrated in court or otherwise that someone has voted (in place of) a dead person.”

Since RISE Moldova’s story on dead voters was published on Sept. 9, the CEC has said that an older, uncorrected voter list was inadvertently posted on its website in August. It has since been replaced by an updated list, officials said.