As war rages around the country, cultural centers and arthouses are scrambling to save priceless objects from destruction and would-be looters. 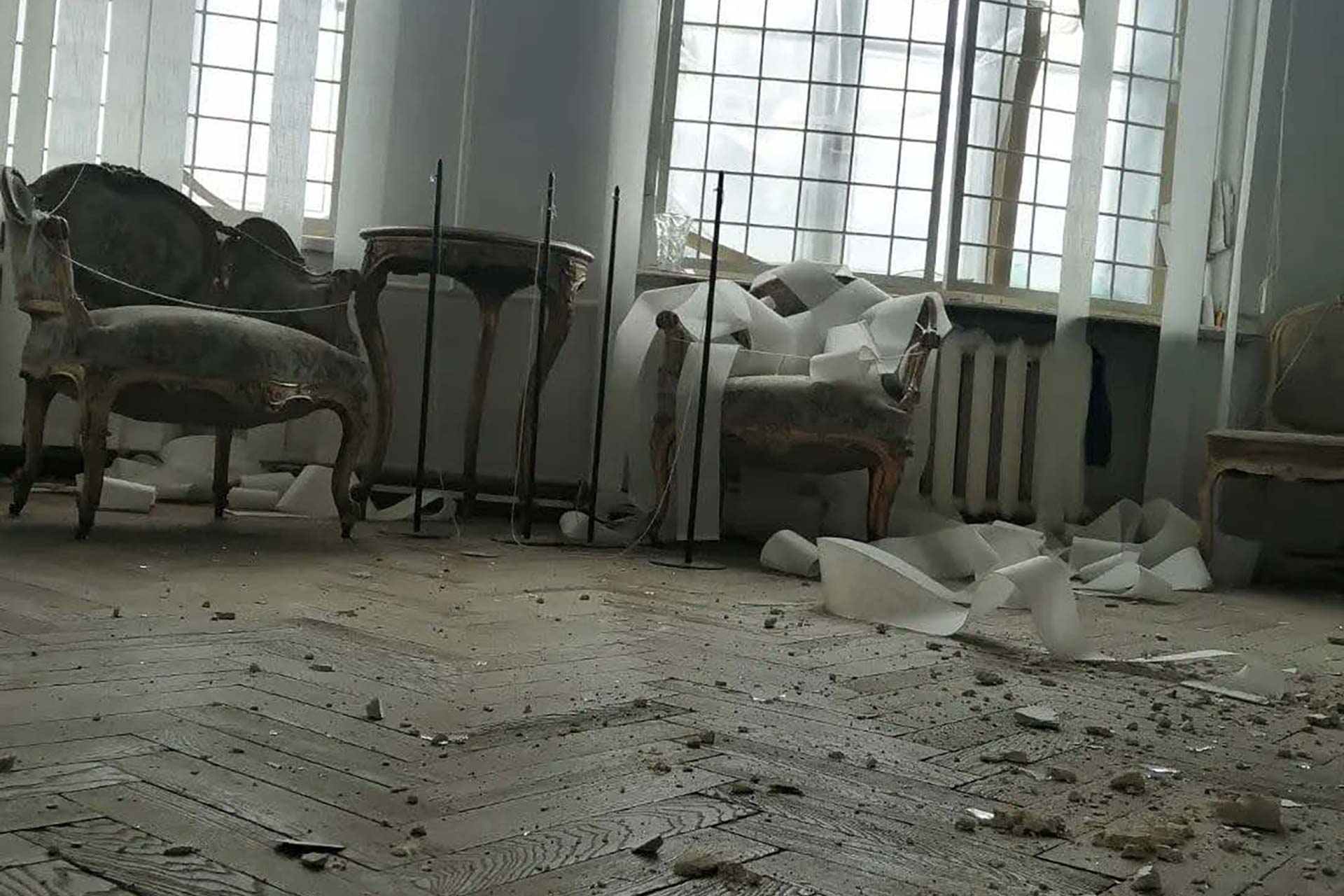 One of the damaged rooms of the Kharkiv Art Museum (Credit: Maryna Filatova)

When Russian soldiers poured across the border into Ukraine, residents of the northeastern city of Kharkiv rushed to cellars for protection, or picked up arms to defend their homeland.

Valentyna Myzgina ran to the museum.

Just 30 kilometers from Russia, Kharkiv was among the first Ukrainian cities to be shelled. The blasts shattered the Kharkiv Art Museum’s windows, but somehow none of its valuable paintings were damaged by flying glass.

“God saved us,” Myzgina, the museum’s director, told OCCRP. “Neither Repin, nor Aivazovsky, nor Vasylkivsky were injured,” she added, listing paintings by the surnames of their long-dead artists, as if they were still alive within their works. “It's just a miracle.”

Still, Myzgina knew divine intervention wouldn’t save the museum’s collection from the elements, from more bombs or from looting if Russian forces take the city. With this in mind, she put out a call for help on Facebook and gathered a team of volunteers, some rounded up via Kharkiv’s regional council.

“We took the paintings and found a place to hide them,” Myzgina said. “In the midst of these bombings in Kharkiv, this had to be done.”

Now, the grand hallways once filled with some of Eastern Europe’s greatest artworks sit empty. The smashed windows in drafty corridors are covered only with tarps and tape. Slats of white vertical blinds litter the floor, lying among bits of wood and plaster that were shaken from the ceiling. 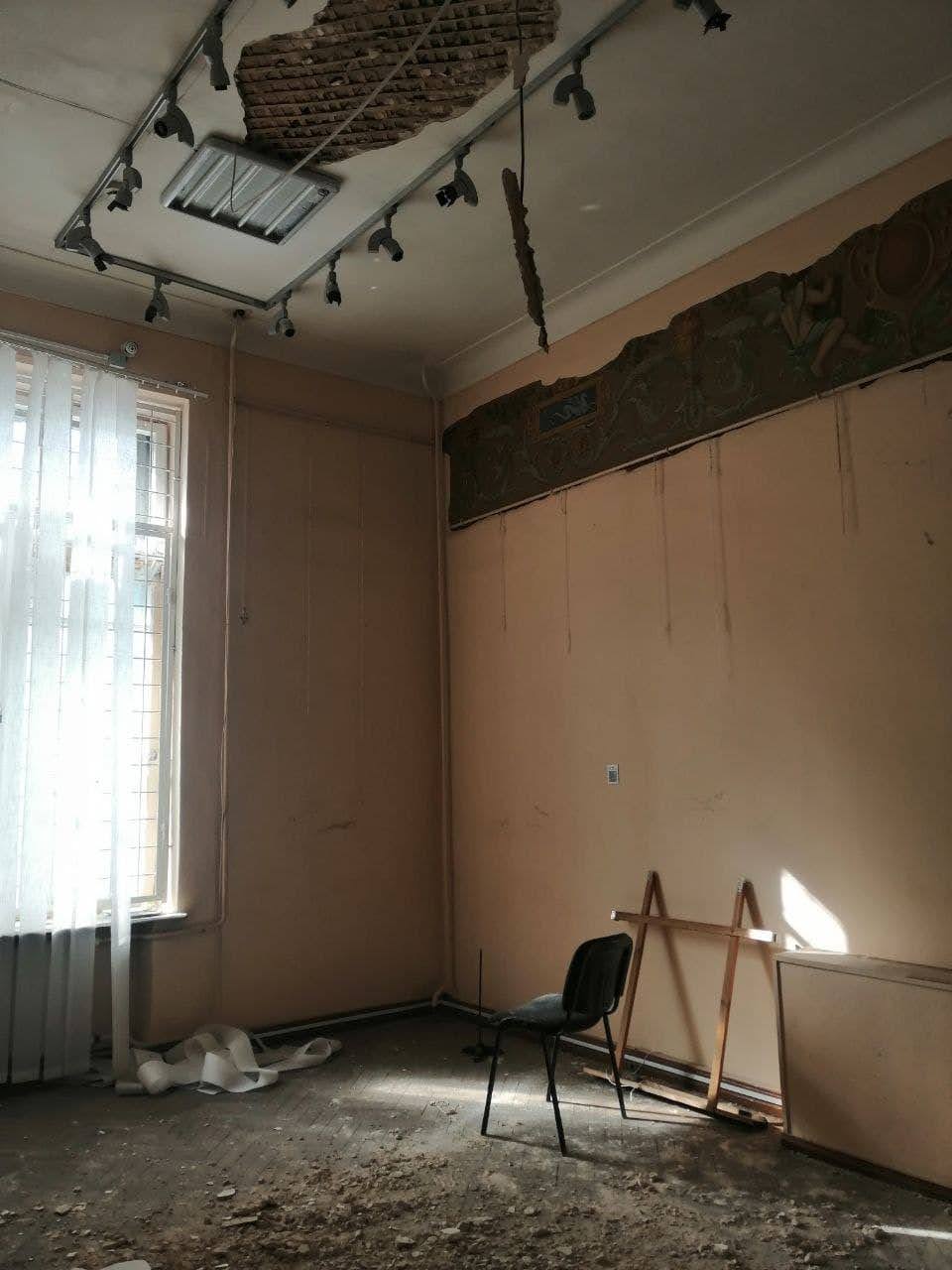 The inside of the Kharkiv Art Museum after the first days of shelling (Credit: Maryna Filatova)

Kharkiv is not alone in these efforts. Academic institutions and museums across Ukraine have been working to safeguard collections from Russian soldiers, whose government has denied the existence of a distinct Ukrainian identity.

On Feb. 24, the day Russia invaded, UNESCO called on combatants to respect the 1954 Hague Convention for the Protection of Cultural Property in the Event of Armed Conflict. The convention deems looting or intentional destruction of cultural property in conflict zones to be a war crime.

Sam Hardy, a criminologist focused on antiquities trafficking networks in Ukraine, told OCCRP that some of the same looters who in the mid-2010s pillaged Syria — where the Russian army backed Bashar al-Assad’s forces during a brutal war — were later found in Russian-occupied Donbas and Crimea. Now, it’s feared the same may happen during this new Russian assault.

“One of the concerns that we have to have is the arrival of looters among the invading forces,” Hardy explained. Monitoring Russian-language web forums, Hardy said he’s already seen several posts by known looters announcing that they’ve entered Ukraine.

“We know already that before the escalation there were cases like the icon that got looted from Luhansk and [was] passed through the hands of Bosnian-Serb veterans to the Bosnian presidential representative,” said Hardy.

When a Bosnian Serb news agency published pictures of the gift, experts recognized a seal that indicated it had once been held at a museum in Luhansk. Ukraine believes it was likely looted by Bosnian-Serb mercenaries who fought alongside Russian-backed forces in eastern Ukraine during the start of the conflict in 2014. Ukraine is demanding its return, but though Lavrov gave the icon back to Bosnia and Herzegovina, Dodik has since refused to hand it back to Ukraine.

Looting is seen in almost every war, and the global trade in trafficked art and antiquities is a multi-billion-dollar criminal industry. Looted pieces often reappear at auctions on the other side of the world, or are offered for sale via social media. Facebook groups are among the most prominent markets.

“Social media has played a critical role in facilitating the expansion of online black markets for artifacts,” said Katie Paul, the co-founder of the Athar Project, which tracks online antiquities trading.

Platforms like Facebook provide “new routes to transnational connections for traffickers,” she said. The online platform, she added, “has democratized what was once an underground industry, accessible only to seasoned traffickers.”

Sanctions against Russia are expected to disrupt the trade, but according to Hardy, looters are already discussing how to circumvent these measures. One ploy is the selling of illegal items through intermediaries in neutral countries.

“It might increase costs and it might slow the process, but it won’t block the process,” he said of the new financial restrictions. “It might mean that this stuff simply arrives on the markets later and at a higher price.”

Who are the ultimate buyers of these pieces?

Some will want to be able to show off “trophies from Ukraine's destruction,” Hardy said, explaining that similar motives drove the illegal antiquities trade from Syria. “We saw material from Syria was being bought by people in Russia, who were primarily concerned with showing … that they could access these goods.”

For those on the prowl, the Kharkiv Art Museum could be a prime target. The museum was founded in 1805 by Vasiliy Karazin, an enlightenment figure of Cossack and Serbian descent who helped make the city a 19th-century center for the arts.

“He brought a unique collection of Western European artists, and then it was like an explosion. Kharkiv residents began to buy works of art in Italy, in the Netherlands,” Myzgina said.

With local artists soon inspired by their surroundings, a special section was later devoted to Ukrainians like the aforementioned Ilya Repin, Ivan Aivazovsky, and Serhii Vasylkivsky. The museum later housed works by Soviet-era figures like Leonid Tkachenko. 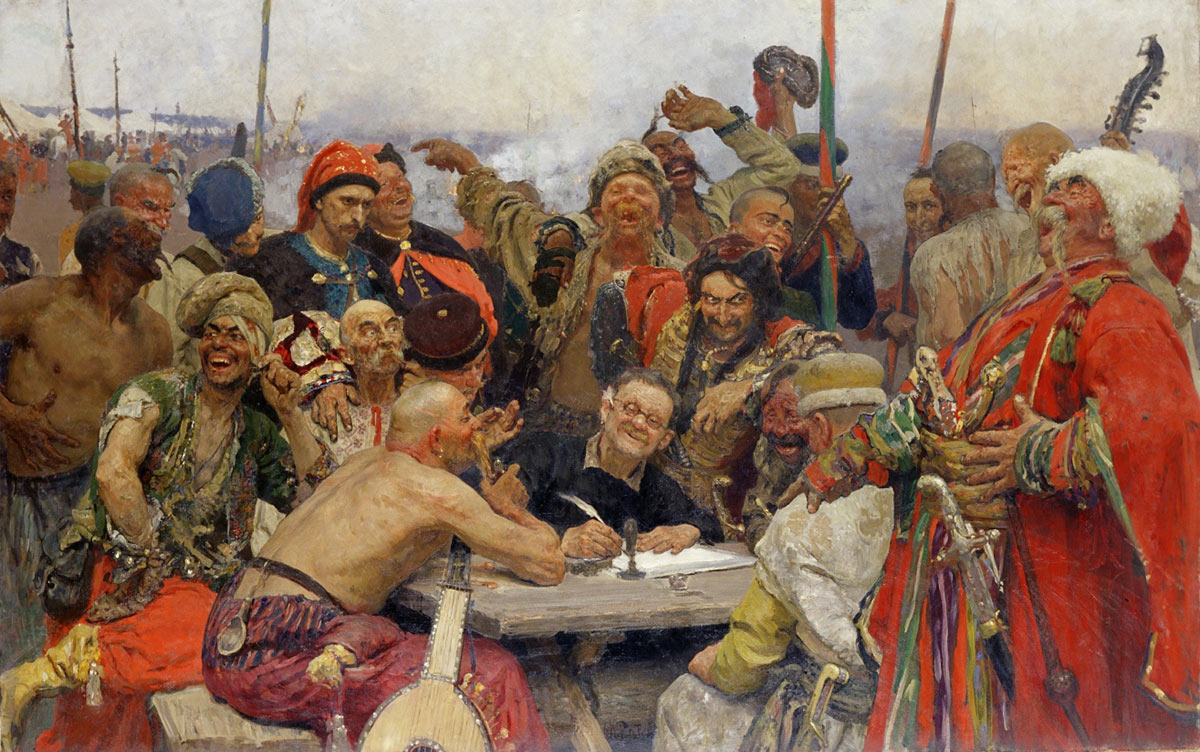 By the start of the Second World War, its collection had ballooned to 75,000 works and was known as the best of its kind in the Soviet Union, outside of Moscow and Saint Petersburg. Just 5,000 pieces were saved from the arriving Nazis, but the museum would later bounce back, boasting 20,000 artworks today.

Now facing the same threat it did in the 1940s, the facility may not just be threatened by foreign invaders, but also by native Ukrainians.

“During a conflict … people are in survival mode where looting and trafficking of cultural property are a means of subsistence rather than an activity of opportunity,” Paul explained. Hardy agreed.

“Some people are looting to replace their lost jobs or to distract themselves from the trauma of everyday life at the moment,” he said, adding that even before the war, antiquities trafficking groups existed as part of Ukraine’s own criminal underground. The chaos of war simply presents new opportunities. 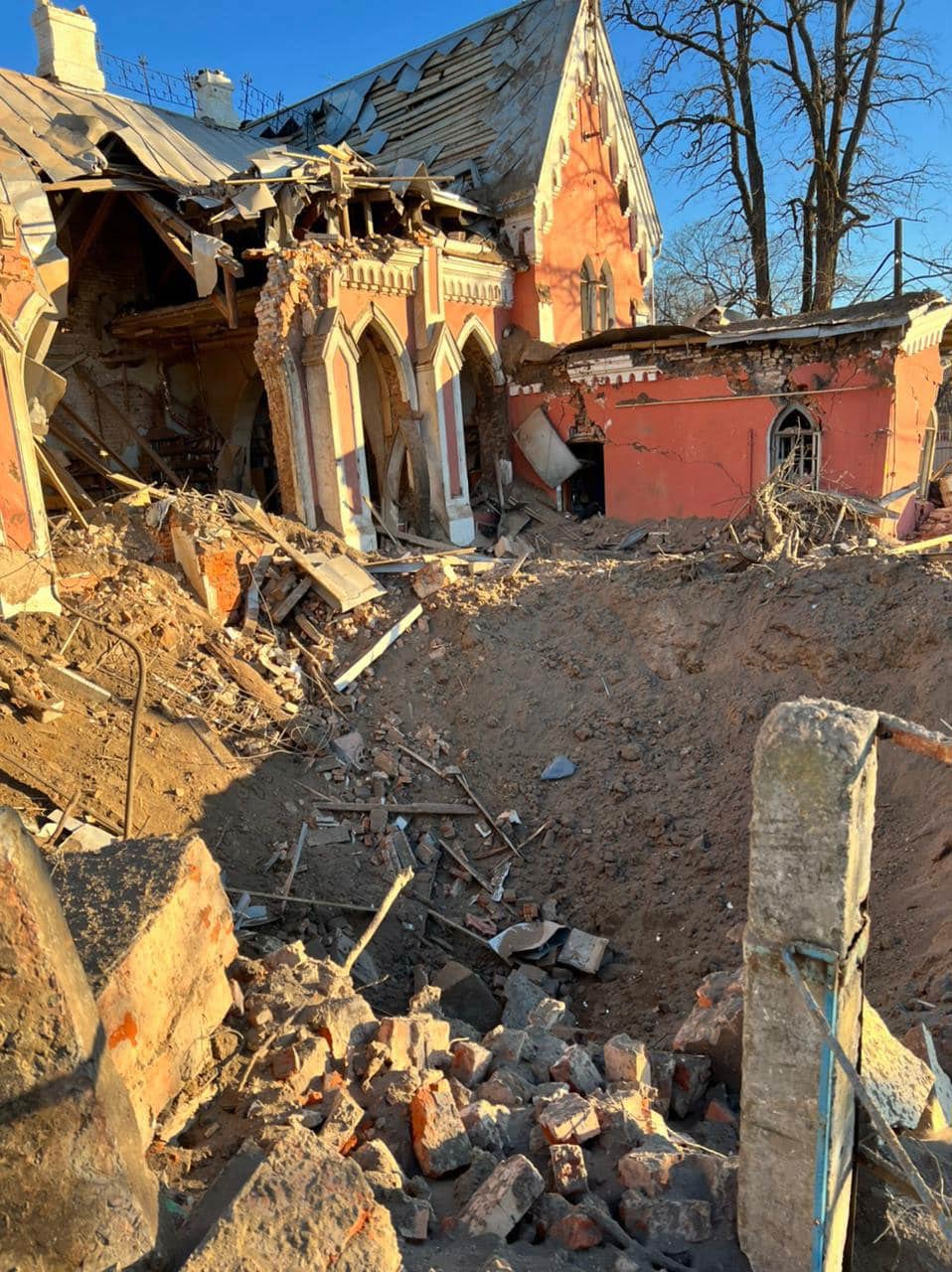 In the northern city of Chernihiv, just 70 kilometers from Russia, curators from the local history museum have worked to move its contents into protected bunkers.

Viktoriia Mudritska, head of exhibitions at the city’s V. Tarnovsky Museum of Regional History, told OCCRP that staff had been trained for such a situation since 2014. Then, as war raged with Russian-backed separatists in eastern Ukraine, the Donetsk Regional Museum of Local History was struck 15 times by anti-tank missiles. Some 150,000 artifacts were destroyed.

When shelling started this time, “we collected all the people we could” to secure the collection, Mudritska recalled. Windows were taped to prevent flying glass, and exhibits were moved to the cellars. “We’re really worried that these works will be damaged or captured by the Russians,” she said.

After the first ten days of war, Mudritska escaped to Poland. Her museum director, Serhiy Laevsky, stayed behind to help defend the collection, but there is just so much he can do against bombs, looters or bandits.

Built as a governor's palace in the 19th century, Mudritska hopes the museum’s meter-thick walls will prove hard to destroy, but some properties connected to the museum have already partially collapsed. Laevsky revealed on Facebook that a Gothic-revival building used by the museum as a youth library has been destroyed.

In Zaporizhia Oblast, on the Dnipro river in southern Ukraine, one of the first buildings the Russians entered was Popov Manor House, a museum in the town of Vasylivka.

“They behaved like looters,” Anna Golovko, director of the museum, told OCCRP. The soldiers would not listen, but instead quickly looted the administrative building. What they could not take with them, they smashed, she said. “They grabbed things without any purpose, they took what they liked, they trampled on what they didn't like.”

According to Golovko, the house’s main value is something immovable: its architecture, which dates to 1864. “This is eclectic architecture, which combines several different styles — pseudo-Moorish, Gothic, Old Russian. We maintain it and this is our greatest treasure,” she said.

“This is our history, and what they are doing is an atrocity. It's not even about what they took, everything can be returned, it's material value. But the cultural values ​​that are being destroyed are certainly not so easy to restore.”

Paul, of the Athar Project, said she fears for Ukrainian culture. 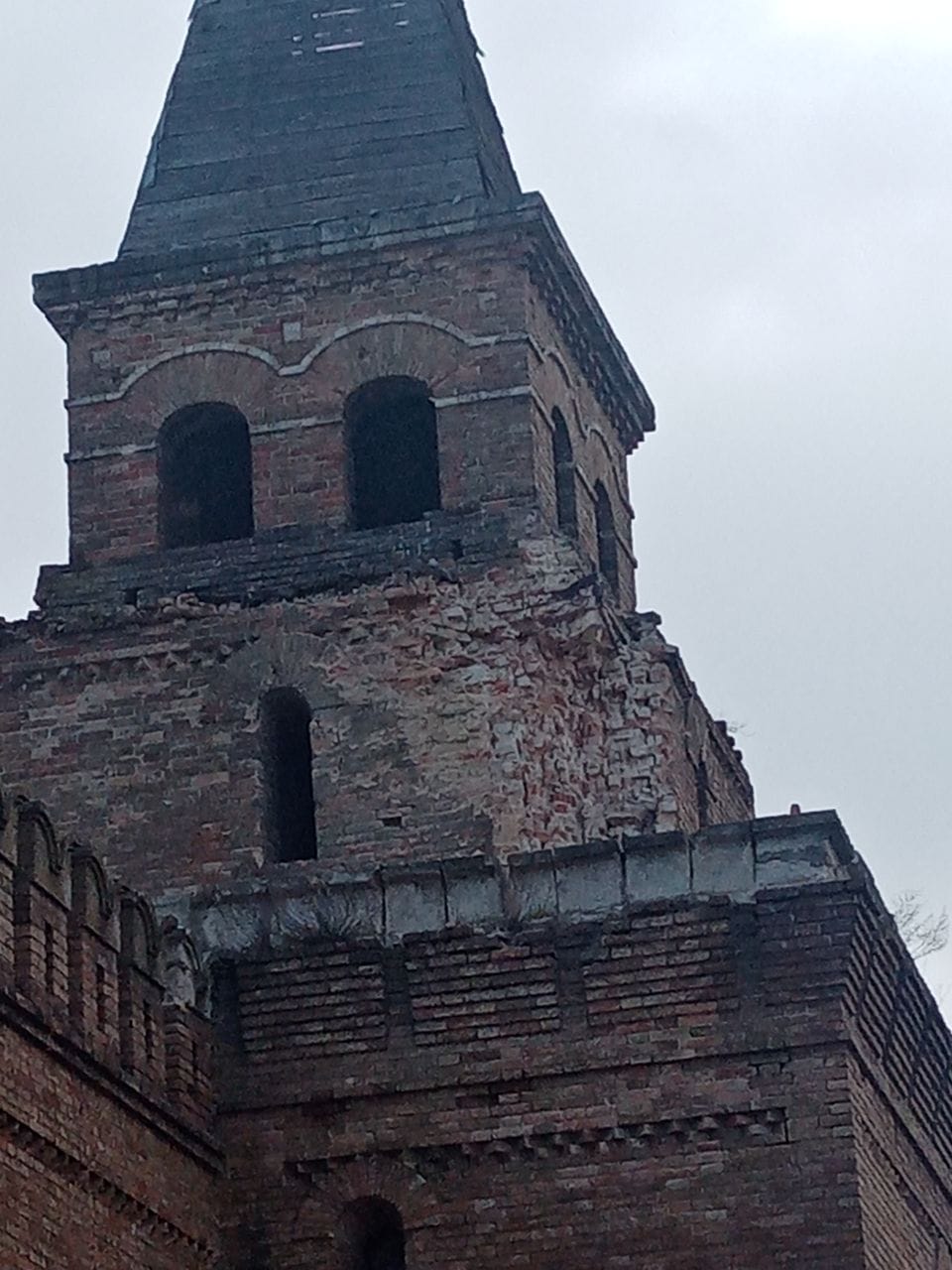 “We have seen from Russia’s previous engagement in Syria and now its efforts in Ukraine, that the military’s indiscriminate shelling, which in some cases appears to even target cultural sites, could lead to the erasure of Ukraine’s cultural heritage,” she said.

Putin’s narrative to justify the invasion has been partly based on the denial of Ukrainian identity, which may be seen as a greenlight for destruction by his soldiers.

In Ukraine, Hardy said, “God knows how many homes, dozens of churches, synagogues, and mosques, as well as dozens of historic sites have been hit. So we know that they're going to be targeting those places. And we've seen strikes on historic sites that aren't near anything that would explain accidental strikes.”

For Myzgina, one great irony is that a lot of what has been damaged in Kharkiv and elsewhere is as much a part of Russian history as it is Ukrainian.

“They want to destroy their own [heritage,]” she said. “Our collection was formed over 200 years and, of course, during the [period of the Russian] empire. We have received many works by Russian artists and they are all in the museum. So we saved Russian painting from the Russians.”

“This is such an absurdity,” she concluded.