As Argentina has been renegotiating its US$65 billion debt with foreign creditors, it is also grappling with the fact that up to six times that amount is believed to be held by its citizens and companies offshore. 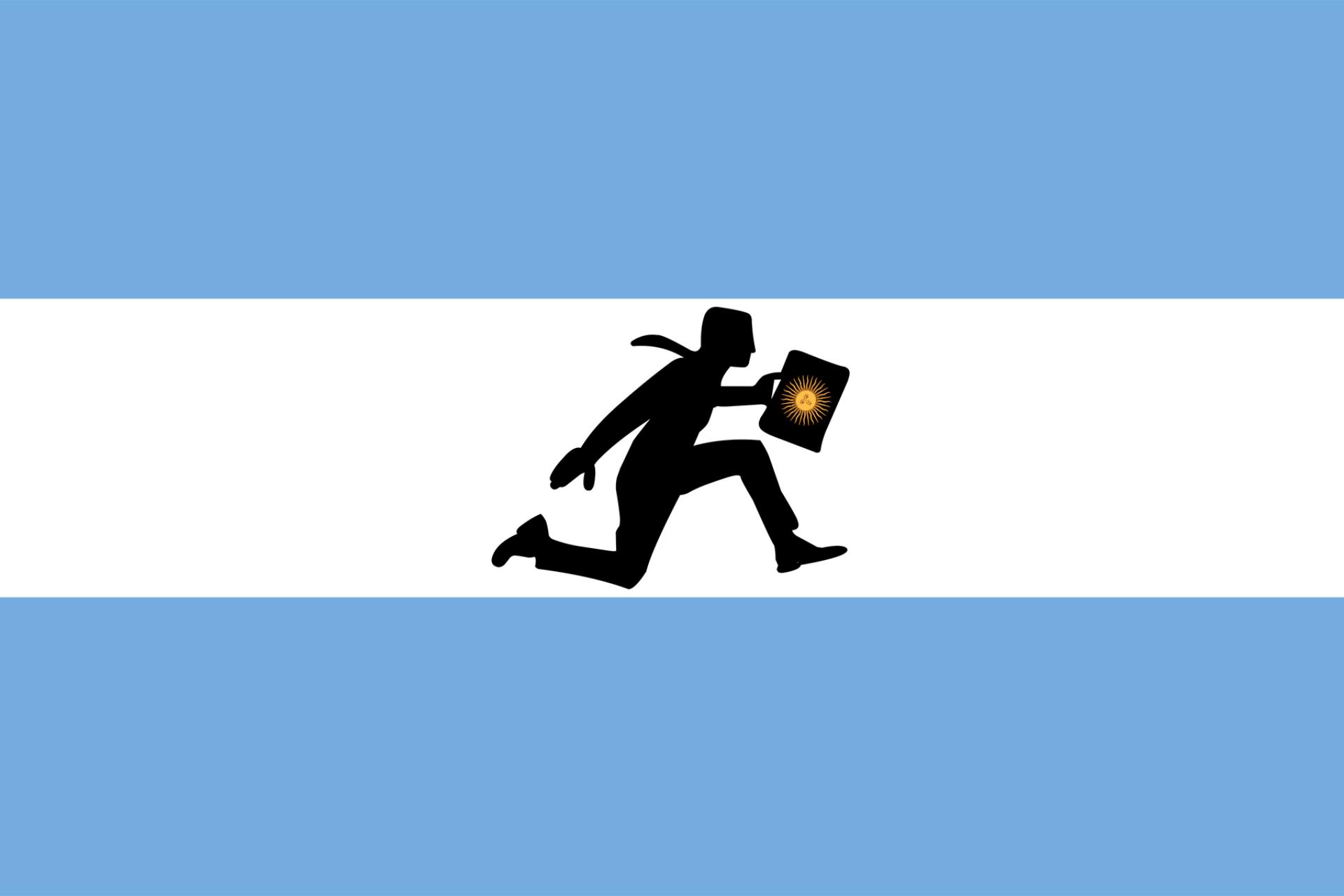 Repatriating a portion of this wealth could help the Latin American country generate urgently needed revenue to ease its chronic economic crisis, which culminated in 2001 with the largest default in world history, and has continued to resurface since.

On May 22, the nation missed its deadline to pay $503 million in interest to its creditors. It has been struggling to find a longer-term agreement on how to pay back a series of unsustainable loans that experts say were used to fill the deficit created by capital flight.

Now the government has taken steps to get a clearer picture of who owns this offshore wealth and how much the figure amounts to. Experts have previously estimated that it could be anywhere from $180 billion to $386 billion.

In April, Argentina introduced measures that could reduce the corporate offshoring of money and also detect illicit financial flows and the proceeds of corruption.

The government first implemented a beneficial ownership register, which is key to tracking down where citizens and businesses keep their money.

The new register forces any Argentinian shareholder, director, or person with a power of attorney over a foreign business entity to disclose his or her identity to financial authorities, the Tax Justice Network reported.

Without such a register, countries are “completely blind on where their residents hold foreign bank accounts,” Andres Knobel, a Tax Justice Network researcher based in Argentina, told OCCRP.

He suggested that this register should be open to the public “to signal to residents and potential tax abusers that they know where the money is held and by whom, to at least cause a deterrent effect.”

Argentina also became the first Latin American country to join Denmark, Poland, Scotland, and France in denying coronavirus assistance to companies if they are registered in tax havens.

But how and why have all those billions fled the country, and how much of it is stolen money?

Just as money flows into the country during periods of economic boom, it flows out as soon as investors and speculators lose confidence in the domestic economy, said economist Gustavo Indhart, a professor at the University of Toronto specializing in Latin American development.

In Argentina, this caused a chain of consequences that eventually resulted in its current crisis, he added.

According to the IMF, 40 percent of the country’s $450 billion GDP is held offshore.
Argentinian economists, however, calculated in 2014 that roughly $300 billion had been sent offshore, according to the Tax Justice Network. 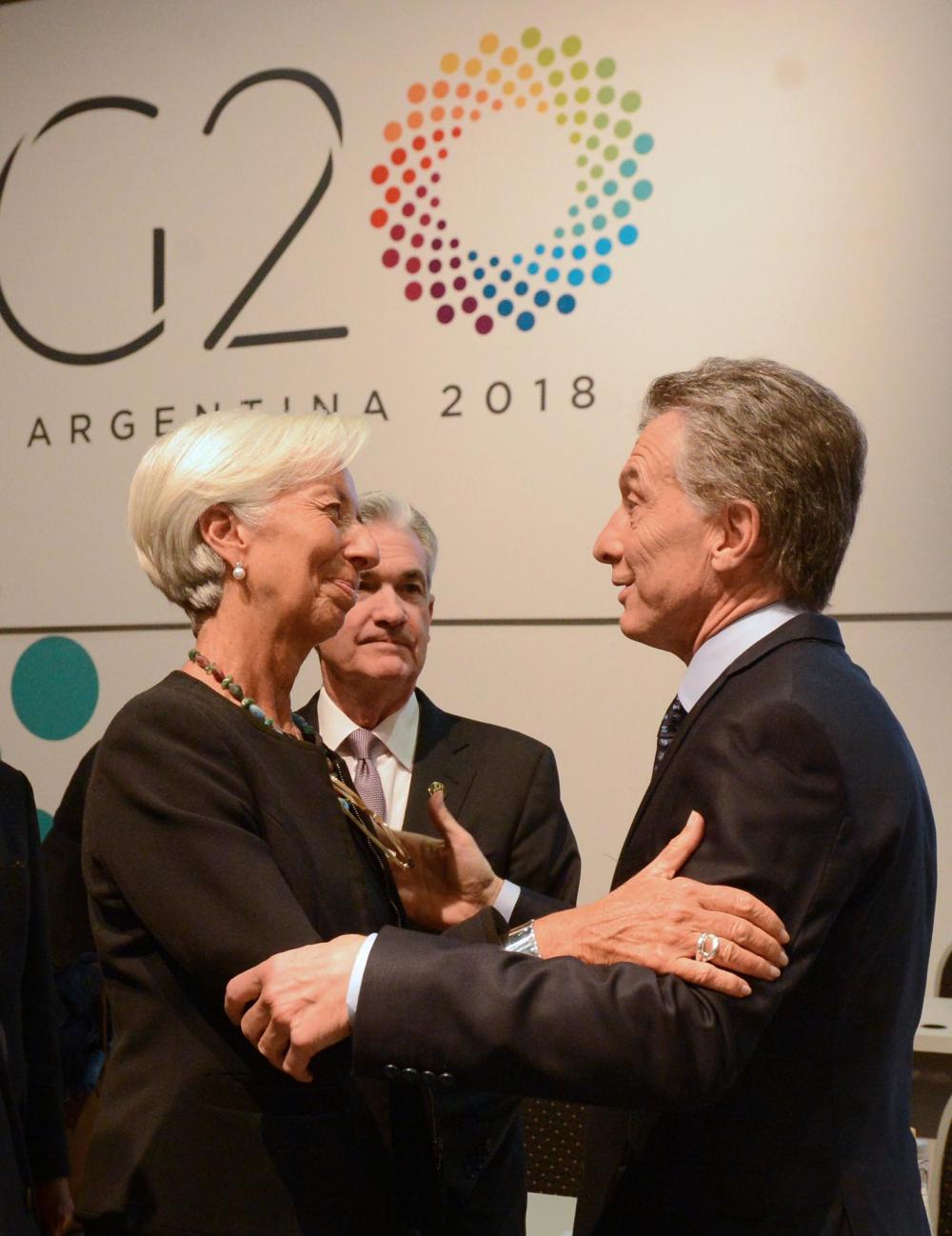 IMF Managing Director Christine Lagarde and Argentine President Mauricio Macri at the G20 summit in Argentina, 2018. CREDIT: G20 Argentina (CC BY 2.0)Mauricio Macri, a businessman-turned-politician, who ran on a platform to reduce Argentina’s debt, became president in 2015 but under his administration the country indebted itself even more.

Macri was voted out of office last year after being criticized by analysts for accepting a $56 billion loan, the largest bailout ever issued by the IMF.

“It was not so difficult to understand that this enormous credit by the IMF would create troubles and worsen Argentina’s problems instead of solving them,” Professor Barbara Fritz, who researches Latin American finance at the Free University of Berlin, explained.

A recent study by BCRA, the country’s national tax authority, concluded that $86 billion linked to just 852 companies and a small portion of the country’s wealthy elite left the country during Macri’s term between 2015 and 2019.

“The dollars that were supposed to finance production left the country, taking the resources and leaving us with the debt burden," he said in a statement released this May, in anticipation of the publication of the BCRA study.

The capital flight was not surprising. Financial instability and a rapidly fluctuating currency can cause savings to disappear overnight, Fritz said.

Therefore, “some people take their money out of Argentina for reasons you and I could understand,” she said.

Others, however, have shady reasons, such as tax evasion or hiding proceeds from corruption or organized crime.

“To trace back capital flight which is illicit and to try to force people to legally bring that money back to Argentina ... is very important and could ease the debt crisis,” Fritz said.

Apart from the debt burden and economic instability, the nation has also been plagued by corruption scandals where people within previous presidential administrations siphoned money offshore.

Argentina’s President from 2003 to 2007, Néstor Carlos Kirchner, and his wife, Cristina Elisabet Fernández de Kirchner — who succeeded his presidency and is now the country’s vice president — both had the same aide who was investigated for illicit enrichment in 2009.

Documents from the Panama Papers leaks show that Daniel Muñoz was connected to a company incorporated in the British Virgin Islands that had been used to invest in U.S. real estate.

He reportedly made several money transfers for Kirchner, which sparked an investigation but the case was dismissed for lack of evidence in 2015 when Macri succeeded Cristina Fernández de Kirchner and offshoring took off even further.

In May 2020, Argentinian journalist Horacio Verbitsky published a list of the top 100 corporations that offshored money under the four years of Macri’s presidency. Verbitsky estimated that the companies collectively siphoned $55.7 billion out of the country. 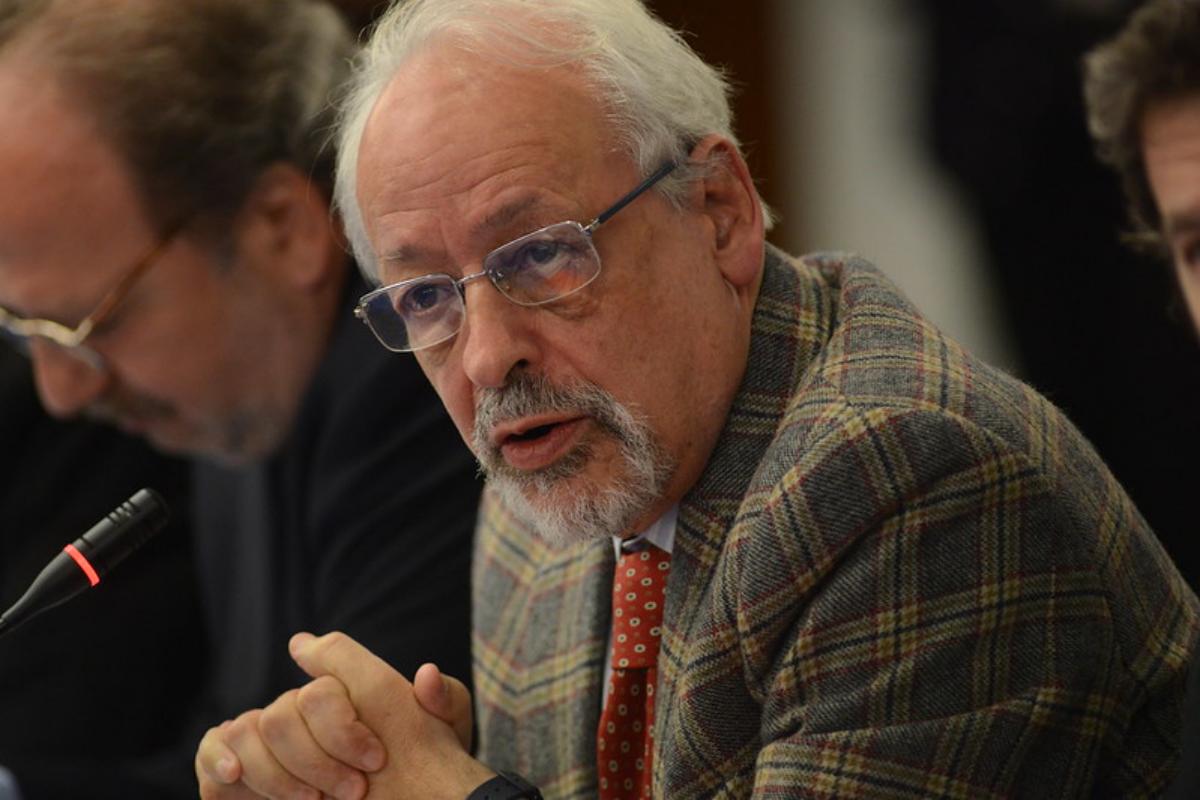 He claimed that some of the companies that are on the list are owned by the country’s wealthiest tax evaders, including Marcelo Mindlin, whom he also identifies as a business partner of Macri.

Mindlin is an example of someone who relies on corporate tax avoidance to illegally evade paying taxes on personal assets, according to Verbitsky.

Worth an estimated $1.6 billion, Mindlin is a major shareholder and the CEO of Pampa Energia, a company that, according to the list, offshored a total of $902.83 million, effectively removing the sum from Argentina's economy and subsequently from the reach of tax authorities.

While this move may be legal, some of the profits Mindlin made personally from these corporate proceeds appear to not have been taxed.

Through various maneuvers concerning the sale of his shares, Mindlin laundered $44 million in 2017, Verbitsky claims.

Mindlin also purchased a company owned by the Macri family through an offshore entity based in the U.S. state of Delaware, he reported in an article for the newspaper el Cohete ala Luna.

“When the government itself becomes similar to a criminal organization, the activities carried out under its protection enjoy the protection of the law,” Verbitsky wrote.

Following an investigation by Argentine prosecutors into Midlin’s financial links to the national government, the billionaire released a statement in which he denied any business ties to the Macri family.

Macri himself has been named in offshore investigations. He appears in the Panama Papers for being on the board of directors of a company incorporated in the Bahamas, despite never having declared these assets while serving in public office.

A spokesperson denied that Macri was a shareholder of this company, saying that despite being listed as one of the company’s directors, he had no capital participation in the firm. 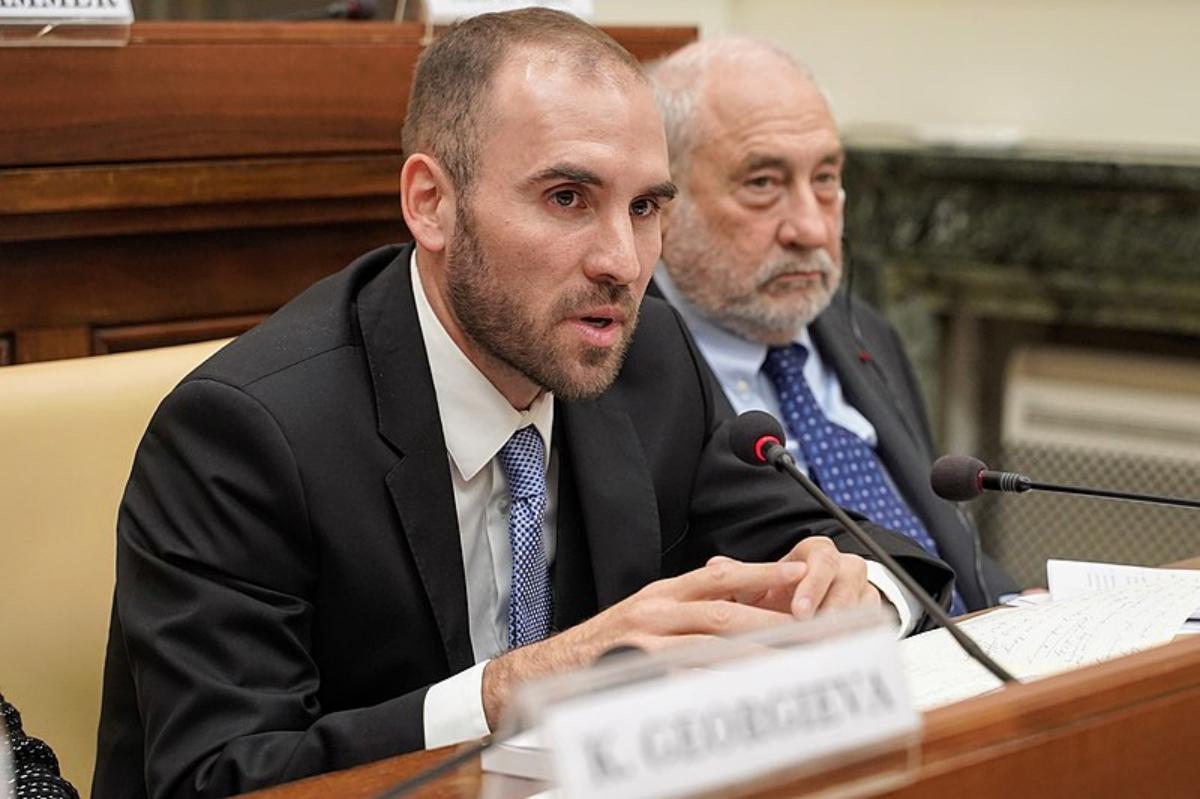 Martín Guzmán, Minister of the Economy of Argentina, at the Pontifical Academy of Sciences with Joseph Stiglitz on 5 February 2020. CREDIT: Gabriella Clare Marino (CC BY 4.0)

Argentina’s current leadership is now stuck with the consequences of capital flight and enormous debt, but they are trying to fight the crisis on several fronts based on the lessons it has learned.

The loan the country took was not used to “increase the country’s productivity” and instead helped “finance capital flight,” said the country’s current Minister of Economy, Martín Guzmán, who is the primary negotiator with Argentina’s creditors.

Guzman, who is also an academic and has published papers on the negative effects of capital flight with Nobel laureate economist Joseph Stiglitz, has spoken on the need to make sustainable changes to the economy that will prevent the country from having to take on further debt in the future.

The COVID-19 pandemic and lockdown means the country’s economy is under even more pressure. The percentage of Argentinians living in poverty could, according to estimates, balloon up to 45 percent by the end of this year.

“We need to make sure that we have the instruments to deal with the dramatic situation the country is going through,” Guzman said. “Doing something that just means hiding the problem under the rug would mean more agony.”