YanukovychLeaks has been honored at the annual meeting of the M100 Sanssouci Colloquium.

The members of YanukovychLeaks received a special prize at the international conference, which gathers 100 leading European media figures at Sanssouci Park in Potsdam, Germany, in recognition of the project’s achievement in “exposing the system of corruption” of Ukraine’s former President Viktor Yanukovych.

YanukovychLeaks is a collaborative project which works to organize and analyze documents recovered from Yanukovych’s Mezhihirya estate on Feb. 22, just hours after he fled the country. Nearly 200 folders of documents were recovered by volunteer divers after they had been thrown into a lake in an attempt to destroy them. Working together, reporters recovered and dried the documents and began the process of sorting and analyzing them.

After being salvaged, these documents, which detail Yanukovych’s extravagant spending, financial investments, and enemies, were uploaded onto an online database created by OCCRP technical staff where they can be viewed by journalists and citizens worldwide. 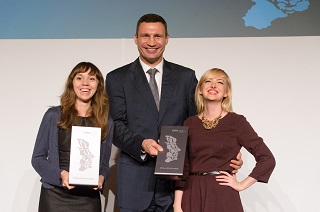 YanukovychLeaks reporters Natalie Sedletska and Kateryna Kapliuk attended the Sept. 12 awards gala in the Orangery Palace and accepted the special prize, presented by Christopher Walker, the executive director of the US National Endowment for Democracy’s International Forum for Democratic Studies.

“It's such a terrific indication of what civil society in Ukraine is doing in terms of supporting accountability, transparency, and efforts to combat corruption that has ripped so terribly into Ukrainian society,” said Walker.

Accepting the prize, Sedletska said that the YanukovychLeaks story is “probably a vital lesson to dishonest politicians that means that it doesn’t matter how high your fence is” because eventually their secrets will be revealed.

The YanukovychLeaks team agreed to donate its prize money to fighters in Ukraine’s civil war.

The M100 Media Prize, which is awarded annually at the conference, was presented to Kyiv mayor Vitali Klitschko for his contributions to Ukrainian democracy.