At the ceremony, which took place on Thursday in Bosnia and Herzegovina’s capital of Sarajevo, ACCOUNT presented awards for the year’s best anti-corruption investigative story, video, and radio piece. Award recipients were chosen by a five-member jury based on originality of topic, relevance and number of sources, quality of investigation, and the effects that the story had. 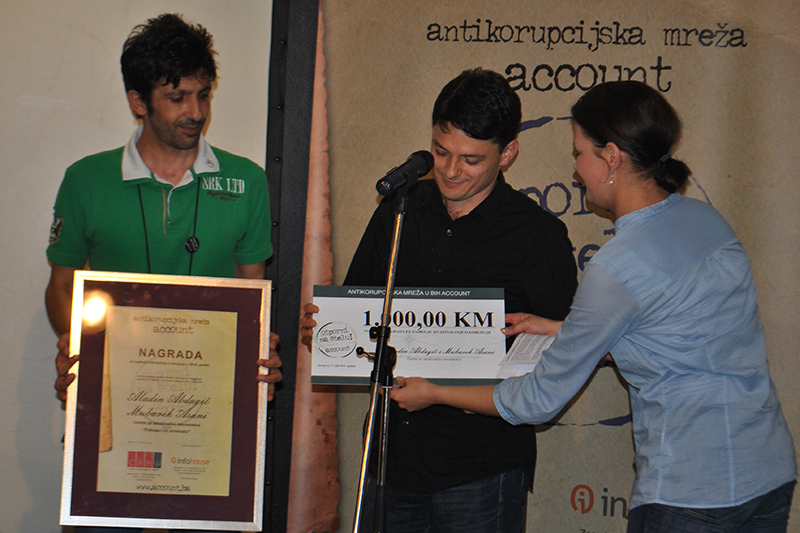 CIN reporters Aladin Abdagić and Mubarek Asani jointly received the best video award for their piece on Ramo Brkić, the former Chief of Police in Bosnia’s Una-Sana Canton, which was broadcast earlier this year.

Aladin Abdagić also received the best investigative story award for his March story "The Valuable Property Holdings of Faris Gavrankapetanović", on the vast and improbable wealth of real estate acquired by a prominent Bosnian doctor and health administrator.

Both stories led to police investigation of their subjects, and Ramo Brkić was sentenced to 11 years in prison for organized crime, abuse of office and corruption.

This is the second consecutive year in which ACCOUNT’s journalism awards have recognized Aladin Abdagić’s writing for CIN.

CIN was founded in 2004 with a dedication to investigative reporting focused on organized crime and corruption and the negative effect they have on the lives of ordinary citizens in Bosnia and Herzegovina.