The online newspaper “Hetq” has won the Media Excellence award at the 2014 Universal Human Rights Awards ceremony, which took place Thursday at the Congress Hotel in Armenia’s capital city Yerevan.

Founded in 2001 by the Association of Investigative Journalists, OCCRP partner Hetq won the award for its high professional standards in investigative journalism and its dedication to media principles. 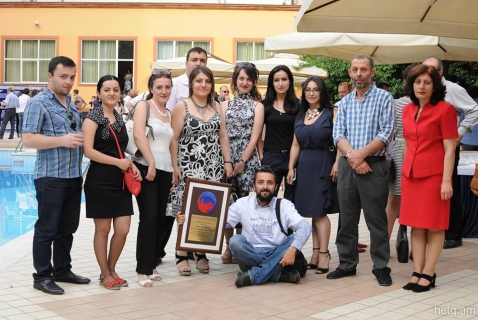 Dirk Lorenz, the charge d’affaires of the European Union delegation to Armenia, presented the award to Edik Baghdasaryan, Hetq editor in chief.

Lorenz praised Hetq as the epitome of professionalism, diverse reporting and adhering to ethical standards in the field of investigative journalism in Armenia.

Upon receiving the award, Baghdasaryan said that he attributes Hetq’s success to a professional news team.

The Universal Rights Awards was founded in 2012 to honor the work and achievements of civil rights activists and government officials, as well as media and civil society representatives, in fostering human rights.