Philippines President Rodrigo Duterte is the Person of the Year for 2017, according to the Organized Crime and Corruption Reporting Project (OCCRP), an organization that has for six years recognized the individual who has done the most in the world to advance organized criminal activity and corruption. 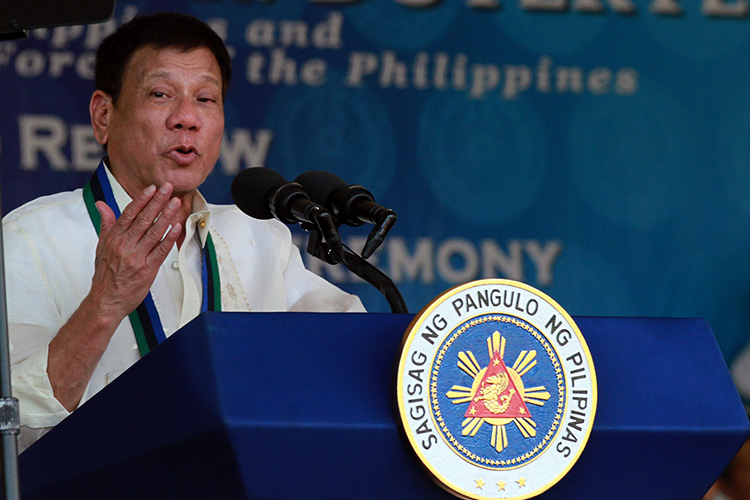 “Duterte has made a mockery of rule of law in his country,” said Drew Sullivan, editor for the Organized Crime and Corruption Reporting Project and one of the nine judges who made the selection from nominations submitted by journalists and the public.

“While he is not your typical corrupt leader, he has empowered corruption in an innovative way. His death squads have allegedly focused on criminals but, in fact, are less discriminating. He has empowered a bully-run system of survival of the fiercest. In the end, the Philippines are more corrupt, more cruel, and less democratic.” - Drew Sullivan.

The global panel of nine corruption-fighting journalists, scholars and activists chose Duterte on the strength of his brutal war on drugs.

Blunt, swaggering and profane, Duterte has vigorously implemented his pledge to use any tactic necessary to stop drug use. "Hitler massacred 3 million Jews,” he declared in a disturbing comparison last year. “There are 3 million drug addicts. I'd be happy to slaughter them."

Philippine officials put the real number of drug users at 1.8 million, but Duterte has overseen the killing of more than 7,000 and possibly as many as 12,000. The statistics are hard to pin down because Duterte’s National Police suppress all critical reports. And police are spared from any accountability or legal consequences for a campaign that has left bodies in the streets.

The African runners-up created division, hostility, and resentment by undermining the rule of law, said Khadija Sharife, a lawyer and editor on the judging panel. Zuma and Mugabe, she said, took advantage of public respect for them as heroes of struggles for national independence to twist and bypass the law.

“Zuma deserved his high showing for implementing systemic corruption in the South African government through his group of cronies,” said Sullivan. “Corruption has ruined much of the goodwill of the ANC.”

Duterte was a runner-up in 2016, when Nicolas Maduro was chosen as Person of the Year. Maduro’s presidency in Venezuela has beggared his oil-rich nation, set murder and crime rates soaring, and has been notable for mismanagement and oppression. Previous Persons of the Year include Russian President Vladimir Putin in 2014, and, in 2013, the Romanian Parliament.

The Romanian winners made corruption news again at the end of 2017 for considering measures to decriminalize abuse-of-office offenses that cause less than $237,100 harm; lowering sentences for taking bribes; and decriminalizing trading official favors for sex. These measures would end the legal woes for at least two top politicians. Since 2006, some 72 Romanian members of parliament have faced charges of graft and greed.

OCCRP is a not-for-profit consortium of regional investigative centers and for-profit independent media stretching from Europe to Central Asia, Latin America and Africa. It works to advance public understanding of how organized crime and corruption affect lives. OCCRP pushes for deeper coverage of global corruption via investigative stories with the support of the Open Society Foundations, USAID, European governments, and other major international donors. It has offices in Sarajevo, Bucharest, and Tbilisi.

JUDGES for 2017 Person of the Year Award:

Luis Manuel Botello is deputy vice president of new initiatives and impact for the International Consortium of Investigative Journalists based in Washington.

Ying Chan, a writer, educator and journalism professor, is the founding director of The University of Hong Kong’s Journalism and Media Studies Center.

Mark Galeotti, senior research fellow at the Institute of International Relations in Prague and lecturer at the Department of Security Studies, Faculty of Social Sciences, Charles University in Prague.

Pavla Holcova, founder of the Czech Center for Investigative Reporting and former board member of OCCRP.

Khadija Sharife is an investigative journalist, researcher and the Africa editor at the Organized Crime and Corruption Reporting Project based in South Africa. She is a lawyer by training and an author.

Paul Radu, award-winning cross-border investigative reporter, co-founder and director of the OCCRP and a founder of the Romanian Center for Investigative Journalism.

Louise Shelley, author and endowed professor at the Schar School of Policy and Government at George Mason University. She is the founder and executive director of the Terrorism, Transnational Crime and Corruption Center and an authority on terrorism, transnational crime and corruption.

Drew Sullivan, investigative journalist and media development specialist, founder of the Center for Investigative Reporting in Bosnia and co-founder and editor of OCCRP.

occrp person of the year