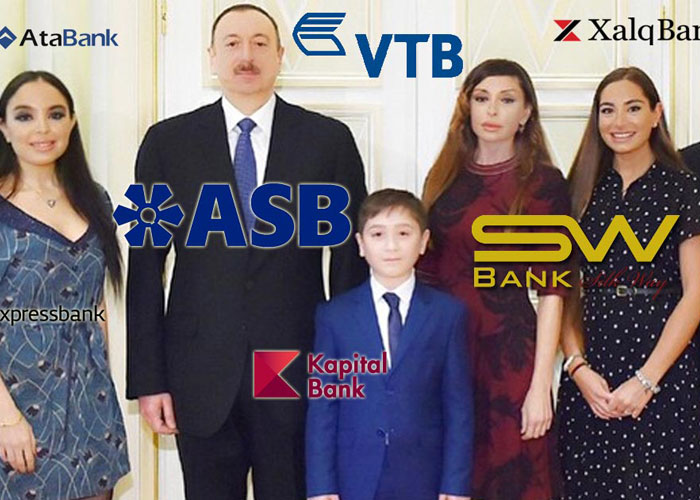 Azerbaijan hopes to dazzle the world with the first-ever European Games, opening with a lavish ceremony in Baku.

As journalists from across Europe descend on the oil-rich state, President Ilham Aliyev is banking on them to show the ancient city’s transformation to a 21st century playground.

Banking is something the Aliyevs know a lot about, according to documents unearthed by reporters for the Organized Crime and Corruption Reporting Project  (OCCRP).

A story posted today on our new Khadija Project website reveals that behind the scenes and through a maze of corporations, the Aliyev family controls assets worth more than US$ 3 billion in at least eight of Azerbaijan’s 45 banks, including three of the top four.

And banking is only part of their empire.

The story of the Aliyev family’s highly profitable foray into banking is just one of the stories that Azerbaijani investigative reporter Khadija Ismayilova was working on last December when she was jailed in Baku on trumped-up charges.

Civil society watchdogs and her colleagues believe the real reason she was jailed was her reporting on business deals involving the Aliyev family and their friends. As the global media spotlight shines on the European Games, they invite journalists and citizens to visit The Khadija Project for a fuller picture of what is going on in Azerbaijan today.

Today’s banking expose was completed for Ismayilova by a team of journalists from around the world. It’s the second in a series of hard-hitting stories continuing her work in defiance of her ongoing incarceration.

Volunteers from the United States and Europe joined forces with teams in Turkey and the Caucasus to complete researching and writing the stories Ismayilova has been barred from writing. Those who would like to join in the work can contact the project here.

“Khadija’s illegal detention, like that of nearly a hundred other Azerbaijani prisoners of conscience, is proof of the lengths to which the Aliyev family and their friends will go to protect the billions they have looted from Azerbaijan,” said Drew Sullivan, OCCRP editor

The Khadija Project journalists are combing global databases and business registries to uncover what the Azerbaijani elite has been up to and where they are secreting their money. Previous stories by Ismayilova and others have uncovered major real estate investments in Dubai and the Czech Republic; mining; construction; and telecoms.

“The First Family should know that for each reporter arrested, twenty or forty or even one hundred will take their place and finish their work,” said Sullivan. “They will always be in the news for their thievery, their shockingly lavish lifestyles and their disgraceful exploitation of the Azerbaijani people.  They are in our media jail.”