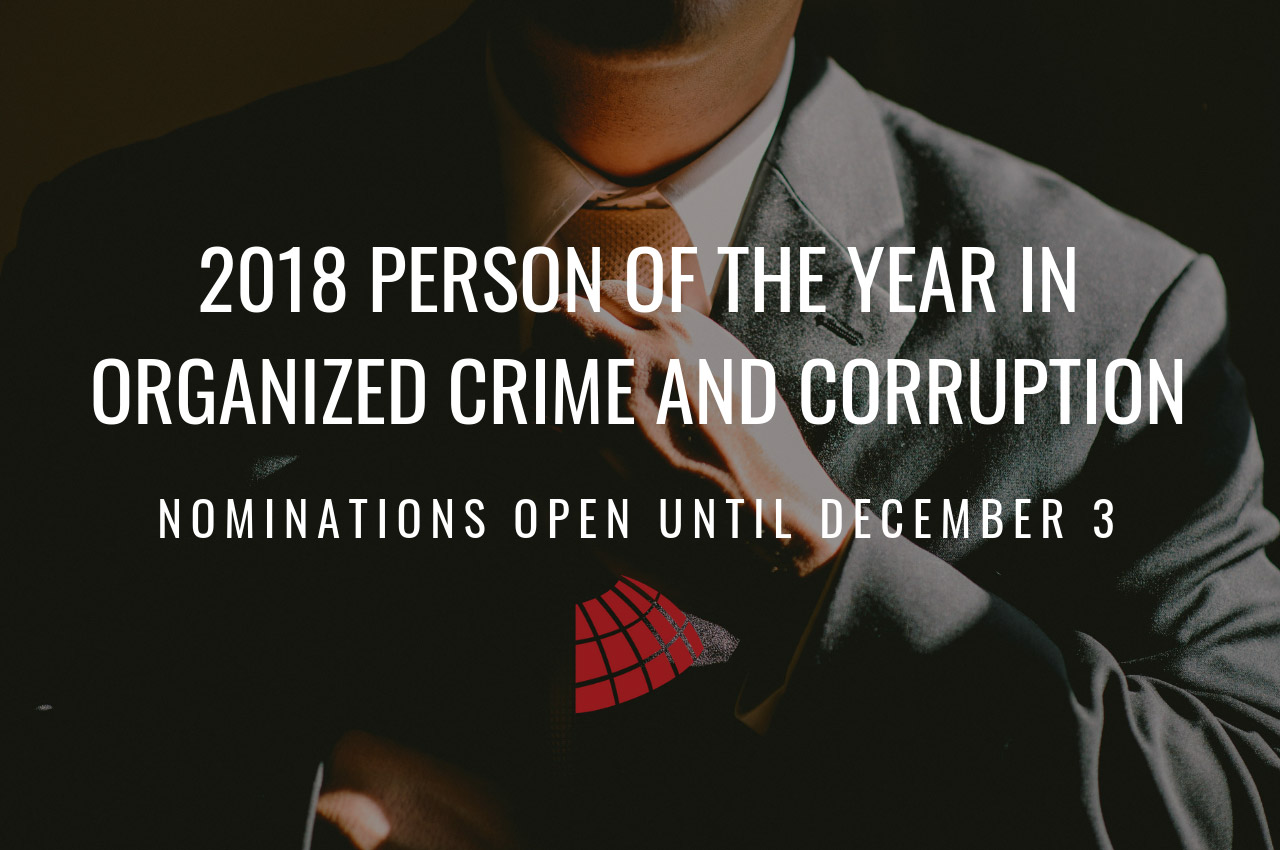 The OCCRP is a non-profit media organization providing an investigative reporting platform for the OCCRP Network, a network of 45 non-profit investigative centers in 34 countries, scores of journalists and several major regional news organizations across Europe, Africa, Asia, the Middle East and Latin America.

Every year since 2012, OCCRP has accepted nominations from the public, journalists and law enforcement and chosen from them the individual (or organization) who has done the most in the world to advance transnational criminal activity and the political collusion that goes along with it.

Nominations are now open and will be accepted through Dec. 3. The Person of the Year will be announced on Dec. 27.

Please send your nominations by email to OCCRP’s Chief Communications Officer, Stella Roque at stella@occrp.org. Please include the full name of your nominee and one to three paragraphs, with supporting links, explaining your reasons for why they should be recognized as OCCRP's 2018 Person of the Year.

The judges this year are:

Ying Chan
Writer, professor, and founding director of The University of Hong Kong’s Journalism and Media Studies Center. She is a former Nieman Fellow and George Polk Award winner. She has edited six books on the Chinese media.

Saska Cvetkovska
Editor in Chief of the Investigative Reporting Lab in Macedonia and a member of OCCRP Board of Directors.

Masha Gessen
Russian and American journalist, author, and activist noted for opposition to Russian President Vladimir Putin (the 2014 Person of the Year).

Carlos Eduardo Huertas
Director of the regional platform CONNECTAS based in Colombia and chief of party of the Investigative Reporting Initiative in the Americas of ICFJ. He is a former Nieman Fellow and investigations editors of Colombia’s Semana Magazine.

Paul Radu
Award-winning cross-border investigative reporter, co-founder and director of the OCCRP and a founder of the Romanian Center for Investigative Journalism.

Rana Sabbagh
Executive director of award-winning Arab Reporters for Investigative Journalism (ARIJ) based in Amman, Jordan. She and ARIJ were 2018 winners of the Raif Badawi award for courageous journalism.

Louise Shelley
Author and endowed professor at the Schar School of Policy and International Affairs at George Mason University, founder and executive director of the Terrorism, Transnational Crime and Corruption Center.

Drew Sullivan
Investigative journalist and media development specialist, founder of the Center for Investigative Reporting in Bosnia and co-founder and editor of OCCRP.

Hennie van Vuuren
Activist, writer, and director of Open Secrets based in Cape Town, South Africa. Focusing on accountability for economic crimes and human rights violations, he works from within civil society to challenge corruption and abuse of power. Author of Apartheid Guns and Money.

OCCRP person of the year