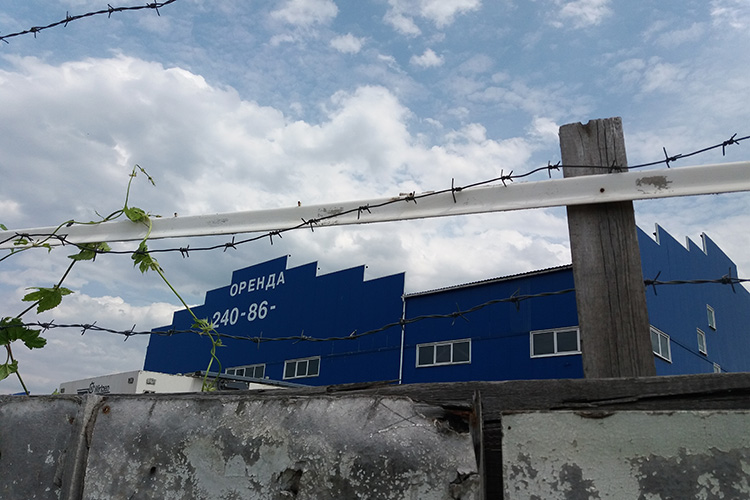 A warehouse outside of Kiev belonging to S-Profit that is leased by Techimpex. (Credit: Graham Stack)

They also contain evidence of embargo-busting. According to the documents, Techimpex and the other connected firms took part in deals aimed at channeling weapons to African hotspots, including South Sudan and Sudan, that are under European Union (EU) arms embargoes.

The documents show that one of the South Sudan deals involved S-Profit, the UK firm linked to Techimpex. Since it is based in the UK, S-Profit is beholden to the EU arms embargoes on South Sudan and Sudan, although Techimpex itself is not.

Among the documents is an Aug. 14, 2014 “framework agreement” worth US$ 169 million, signed by Ukrinmash, to supply weapons including 12,000 machine guns, 50,000 Kalashnikov rifles, and 2,000 rocket-propelled grenade launchers to South Sudan’s government. IGG, an Emirati firm, acted as broker.

Anatoliy Maiboroda, a former head of Ukrinmash, told OCCRP that Techimpex was intended to be the supplier of the equipment. Maiboroda said that, in the end, he decided not to implement the deal because he considered S-Profit’s involvement to be illegal.

“S-Profit came into the picture to avoid showing the full size of the profit from the deal,” Maiboroda said.

Ukrinmash said in a statement on September 25 that the contracts were not implemented.

However, the State Service of Export Control of Ukraine stipulated in its annual declaration of arms sales that 830 light machine guns and 62 heavy machine guns were exported to South Sudan in 2014. It’s not clear if there is any relation to the deals found in the Techimpex documents.

None of the documents relating to the deal mention Techimpex. However, they make clear the key role played by the firm’s UK partner, S-Profit.

An end-user certificate issued by South Sudan on April 20, 2014, four months prior to the framework agreement, lists S-Profit as Ukrinmash’s supplier. In a separate contract in October of that year, S-Profit also agreed to supply $3.66 million worth of rocket-propelled grenades.

In an interview, Techimpex’s largest shareholder, Yevgeniy Vashchilin, told OCCRP reporters that his firm had “no relationship” with S-Profit. However, Techimpex director general, Volodimir Kalina, told Amnesty International that "the Company Techimpex has been working with S-Profit for years and we consider this company to be a reliable and responsible business partner.”

The relationship seems closer than that. According to a report by Amnesty International, some commercial correspondence on Techimpex letterhead, signed by the firm’s general director, is duplicated on S-Profit letterhead, with the same text signed by the S-Profit director..These documents suggest that S-Profit business was in fact being conducted from within Techimpex.

Among S-Profit’s documents is an unsigned declaration that the company deals in arms – never filed with British authorities.

There are other close contractual relations between S-Profit and Techimpex, similar to those between many local Ukrainian firms and their offshore adjuncts. For instance, Techimpex leases a 6,390-square-meter warehouse complex in Kyiv, which they claim to use for logistics from S-Profit, with the lease costing $766,800 per year.

The Techimpex documents also show that, on April 11, 2016, the company signed an agreement to export $1.41 million worth of tank engines and parts to Sudan, which has been under EU embargo since 1994. It is unclear if the weapons were delivered.

The UAE firm, IGG, was likely also part of a deal involving Techimpex and Ukrinmash to sell almost $5 million worth of BMP-1 and BTR-3E armored personnel carrier parts to Chad in 2014 and 2015, according to the documents. The origin of the vehicles is unknown.

Ukrinmash is under investigation by Ukraine’s National Anti-Corruption Bureau. In 2016, investigators were looking into allegations that funds were siphoned off in the form of a 12 percent payment worth $1.95 million, paid by Ukrinmash to a Scottish shell company. Techimpex is not one of the parties under investigation.

The investigation highlighted the growing role of Emirates-based brokers like IGG in the export of Soviet-style military hardware from countries such as Ukraine. The first known major deal between Ukrinmash and IGG was revealed by UN investigators tracing the delivery of arms to Libyan rebels from Eastern Europe in September 2011.

Emirati firms are becoming key nodes in this trade to Africa and the Middle East because they offer their own financing, former Ukrinmash head Maiboroda told OCCRP.

“South Sudan [for example] doesn’t buy arms with its own money, but with the money of its sponsors, such as International Golden Group,” Maiboroda explained the reason for their involvement. “They are the payers, they have money.”