Albanian police say they have busted a gang of hired assassins which was being run from the prison cell of a convicted murderer. 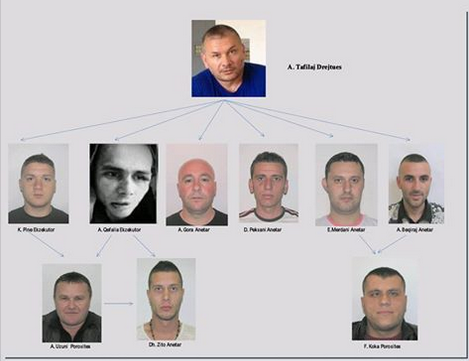 Hitman Gang Suspects. Photo: Facebook According to police in Tirana, the gang was headed by Admir Tafilaj, a convicted murderer who is serving a life sentence in a high-security prison near the town of Elbasan. He has twice escaped from prison and a third attempt was foiled last year.

Police said Wednesday that they have arrested eight suspects, issued arrest warrants for two others and are investigating a further three as part of Operation Epilogue.

Among those detained are two of the gang’s suspected hitmen, Kristi Pine and Alfred Qefalia. Both Pine and Qefalia were arrested by Albanian police in February this year.

Paul Elson Merdani, brother-in-law of the organization’s boss, Tafilaj, was also arrested earlier this year for his role in the criminal group.

Albanian media claim the gang is suspected of organizing at least four murders.

The police are continuing to work with the Tirana Prosecutor for Serious Crimes to look for additional suspects.