Iraqi authorities last month issued arrest warrants against 21 high-ranking state officials, including a current minister, following an investigation that has seen 77 other officials summoned, according to a statement released on Wednesday by a commission that investigates corruption. 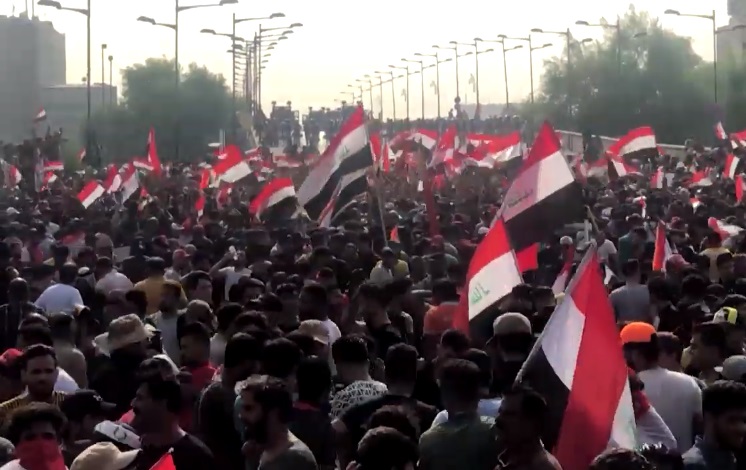 Iraq declared in 2017 a national war on corruption, but progress has been slow. In 2020, as the pandemic was gripping the globe, Baghdad has been wracked by anti-corruption protests for months. Protestors even called on the coronavirus to take the corrupt politicians. (Photo: Alrafidain TV, Wikimedia, License)The statement by the Federal Commission of Integrity comes just days after the European Union Ambassador to Iraq announced on Twitter that the EU has removed Iraq from its list of countries at high risk of money laundering, six years since being added.

But Iraq’s troubles with corruption and money laundering run deep.

In a speech to the U.N. General Assembly last September, President Barham Salih attributed Iraq’s struggles with corruption to “the heavy burden left behind by wars and conflicts that have squandered a huge part of the resources of the country, thus depriving Iraqis of the riches of their land.”

His remarks came months after declaring on national TV that an estimated US$150 billion of stolen money has been smuggled out of the country since 2003.

In both speeches, President Salih conveyed the need to introduce new legislation into the legal system, which seeks to “recover the proceeds of corruption,” hold the corrupt accountable and bring them to justice.

Ranking in the bottom 20 of Transparency International’s 2020 Corruption Perception Index, the anti-corruption watchdog said in an analysis of Iraq that “corruption enshrined in the system deprives people of their basic rights, including access to safe drinking water, health care, uninterrupted electricity, employment opportunities and an adequate infrastructure.”

The country declared in 2017 a national war on corruption, but progress has been slow. In 2020, as the pandemic was gripping the globe, Baghdad has been wracked by anti-corruption protests for months. Protestors even called on the coronavirus to take the corrupt politicians.