Made in China: How Czech Companies Bought Tens of Millions of Rounds of Old Ammunition

At about noon on March 15, a series of explosions at a facility in the village of Gërdec sent fireballs into the sky, artillery shells into homes, and shockwaves slamming into the nearby capital, Tirana. The disaster killed at least 26 people.

But Albania’s tragedy turned out to be a business opportunity for two rival Czech companies.

Interviews and documents obtained by OCCRP show that, by prompting the Albanian government to unload its dangerous Communist-era munitions, the catastrophe opened the way for Czech companies Real Trade Praha and STV Group, controlled by arms tycoons Jaroslav Strnad and Martin Drda, to move in on the country’s dirt-cheap but unstable stockpiles.

Credit: STV Group A display for STV Group at a 2017 arms fair in the Czech city of Brno.

Between 2010 and 2015, Real Trade Praha – the Strnad-linked firm – and the Drda-controlled STV Group bought tens of millions of rounds of old Chinese munitions between them, according to internal documents from Albania’s state-owned Military Export Import Company (MEICO).

The documents also show that over 100 tons of RDX, an explosive, was sold from Albanian stockpiles to buyers in the Czech Republic, in spite of alarm by US diplomats over the instability of the material.

The ammunitions purchases raise questions about what the firms did with their tens of millions of rounds. Decrepit and unreliable, Chinese ammunition of the sort kept in Albanian stockpiles is difficult to sell on the international market. It is not used by NATO member states’ armies, including that of the Czech Republic. But, along with old Czech rounds, decades-old Chinese ammunition frequently makes its way onto battlefields in Africa and the Middle East.

“There will not be any interest from the military or police side [in Europe],” said Pieter D. Wezeman, senior researcher at the Stockholm International Peace Research Institute (SIPRI). “I can’t imagine that at all.”

Instead, he said, typical purchasers of such ammunition might be “countries [that] have relatively little money to spend which are in urgent need because they have a conflict ongoing and which have a procurement system which is not functioning particularly well.”

Georges Berghezan, a researcher for the Group for Research and Information on Peace and Security (GRIP), said it was likely that “the Czech firms re-exported the Chinese-Albanian ammunition to third parties and that the ammo finally ended up in the hands of Syrian rebels, Iraqi Kurds or central government forces, or Afghan security forces.”

“Yemen or an impoverished and conflict-ridden African country, like South Sudan, could also be a possible destination.”

A separate set of leaked emails obtained by reporters throw more light on Real Trade’s deals. They show that, in seeking to smooth the movement of one shipment, the company sought help from Petar Crnogorac, a Serbian businessman previously investigated for attempting to sell weapons to Islamist fighters in Libya.

The MEICO documents reveal specific details about nine deals the Albanian arms exporter made with the Czech companies.

They show that, between 2010 and 2015, MEICO sold a total of over 81 million rounds of ammunition – most of it Chinese-made and mostly of types used for Soviet-style rifles and machine guns – to the Czech Republic. It also sold 358 mortar rounds and nearly 110 tons of RDX explosive.

Of the 81 million rounds, Real Trade Praha, a firm from Strnad’s portfolio, imported nearly 34 million in various calibers (as well as the 358 mortar rounds). Drda’s rival STV Group imported about another 31 million rounds of 7.62x39 mm ammunition, the type used in AK-47 assault rifles and other Soviet-style guns. These cost a total of $920,160 – about three cents per round. 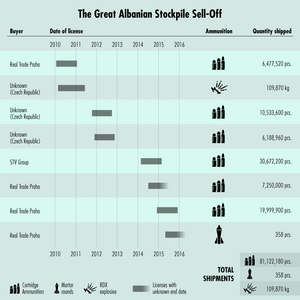 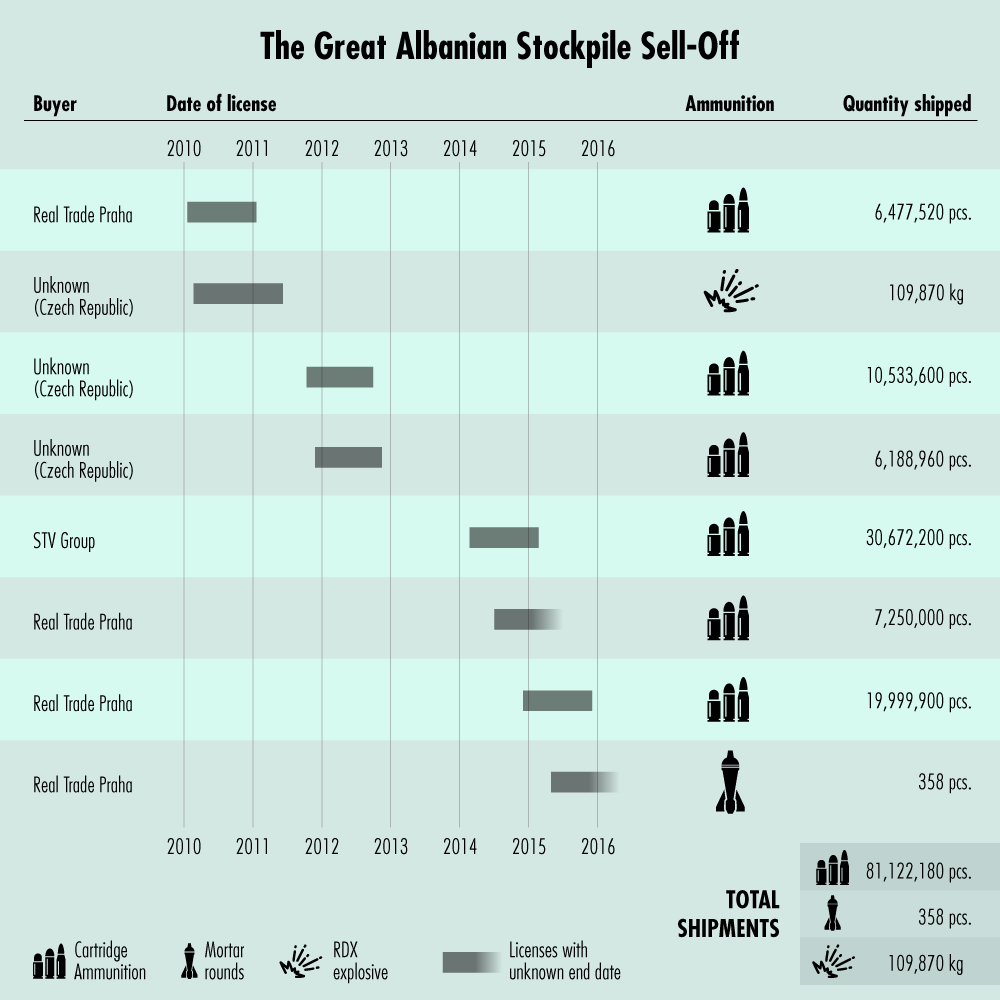 The remaining rounds – nearly 17 million – were also sold by MEICO to the Czech Republic, but it is not clear which company bought them.

The potential sale of the RDX explosive was being carefully watched by US diplomats in Albania as early as 2009, according to a State Department cable from July that year released by WikiLeaks.

US officials had asked Albanian authorities to destroy – and not export – its stockpile of 150 tons of RDX following the Gërdec disaster, according to the cable. (The RDX had been stored at a separate site.) However, the cable notes that US diplomats had already heard rumors that an unnamed Czech company had attempted buy the explosives.

The MEICO documents obtained by OCCRP show that nearly 110 tons of the RDX were sold in 2010. They do not show which company bought the explosives, indicating only that the Czech Republic was the final destination.

After the deadly Gërdec explosion, a new director, Granit Leka, was brought in to head MEICO. He quickly made clear that he wanted to sell off Albania’s dangerous stockpiles.

Credit: STV Group The aftermath of 2008 explosions at an ammunition dump in Gërdec, Albania, that killed 26 people.

Leka confirmed to OCCRP that MEICO had sold ammunition to Czech companies.

“I was happy to sign contracts with companies from an EU country, with end user certificates,” Leka said. “We signed the contracts immediately because they made us good offers.”

“According to the contracts, it was the Czech companies who managed transportation [of the munitions from Albania].”

“Who Would Buy This Stuff?”

It is unclear just what the Czech companies did with the ammunition they purchased.

One thing is certain: The companies didn’t sell it to the Czech military. In response to questions, a spokesman said that the country’s armed forces were focused on NATO standards and do not use Chinese weapons or ammunition.

A representatives of Strnad’s companies confirmed that “companies from the Czechoslovak Group buy redundant ammunition, weapons, military equipment or spare parts in various European countries, including Albania,” and insisted that most of the purchases was sold to EU customers.

Representatives of STV Group declined to respond to reporters’ questions.

“I am sure that [much] of the lot is unusable, which explains its very low price,” Berghezan said.

One source with inside knowledge of Real Trade’s initial 2010 deal, who declined to be named because he feared retribution, said that the ammunition was likely intended for resale in conflict zones, particularly in Africa. He did not provide additional documentation to back up his claim.

“The particular ammo you are asking about, think about it… who would buy this stuff? Not an army, not the Americans, not the Russians,” the source said.

“From a box of 100 bullets, maybe 30 or 10 won’t work at all, who can know with that kind of shitty ammunition. But armed civilians and gangs in Africa won’t care.”

Wezeman, the SIPRI arms researcher, said that the Czech exporters would face few legal obstacles exporting the ammunition to most countries or armed groups as long as they received permission from the Czech government.

“The chances that they will get permission to export, I’d say, are quite high, there are very few places which they can’t export to,” he said.

As possible exceptions, he named countries under EU or UN embargoes, such as South Sudan, Sudan, and Iran.

A representative of Real Trade said, “CSG Group companies adhere to all national and international rules governing the trading of military equipment. All exports are therefore made on the basis of valid end-user licenses.”

A set of leaked emails from Strnad’s employees that were obtained by OCCRP and partners shed further light on his Balkan deals.

The emails, sent to potential business partners in other Balkan countries, indicate that his firms were looking to buy more ammunition elsewhere, this time not of Chinese manufacture. They confirm that Strnad was personally in the loop on the business. And they reveal that one of his executives was in touch with a notorious Serbian arms dealer accused of various crimes. 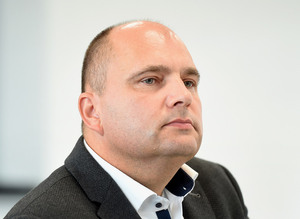 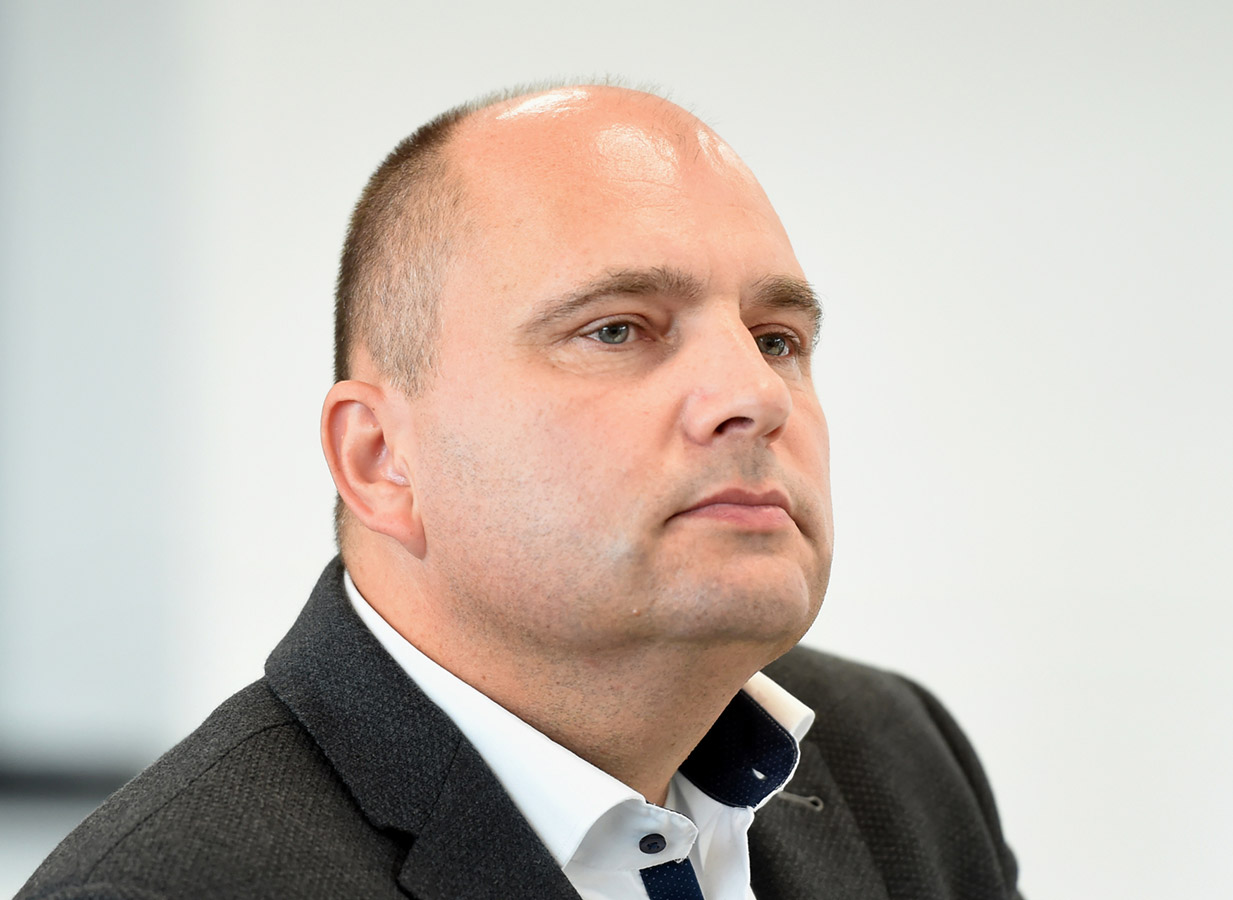 In a March 2010 email from Real Trade executive Petr Rusek to a Macedonian business partner – bearing the warning “STRICTLY CONFIDENTIAL!!!” – Rusek disclosed his firm’s first contract to buy Chinese-made ammunition from the Albanian MEICO. He then explains that he’s looking for additional ammunition, in various calibers, specifying that most of it must be manufactured elsewhere (“no China”).

The email was cc’d to Strnad and another of his executives.

In a separate email, Rusek asks a Serbian man he addresses as “Mr. Trninic” for help ensuring the safe transit of one truckload of the ammunition through Serbia. The email notes that arrangements had already been made for transit through Macedonia and Hungary, confirming the land route that appears in the MEICO paperwork.

The truck, which was slated to make the trip in late January, would likely be the first of many, Rusek wrote.

Rusek also told Trninic that he had been referred to him by Petar Crnogorac, the owner of Serbian arms firm CPR Impex.

Crnogorac has faced multiple accusations of bending and breaking the law. A previous investigation by OCCRP and partners found that CPR Impex had acted as a middlemen to sell European arms to Saudi Arabia that likely ended up with Syrian rebels.

In 2014, Crnogorac was arrested in Serbia on charges that he had obtained inside information on military surplus tenders; the charges were later dropped.

A UN panel in 2015 investigated a CPR Impex subsidiary over accusations that it had sold weapons to Islamists in Libya. Crnogorac has confirmed that discussions were held on exporting weapons to Libya, but said the deal never went ahead.

The UN panel reported in 2016 that the Montenegrin and Serbian governments had informed them they had received no requests for arms exports to Libya.

Read on to find out about the factories the Czech companies bought in the former Yugoslavia.

The story was reported in collaboration with BIRN Albania, the Czech Center for Investigative Journalism, the Crime and Corruption Reporting Network (KRIK), and NOVA TV.