The businessman also bought at least two bankrupt, formerly state-owned factories in the former Yugoslavia, both of which are linked to the arms industry.

He made the first of those purchases, the Suvenir ammunition factory in the Macedonian village of Samokov, in 2010. He bought the second, the 14. Oktobar factory in the Serbian city of Kruševac, last year. 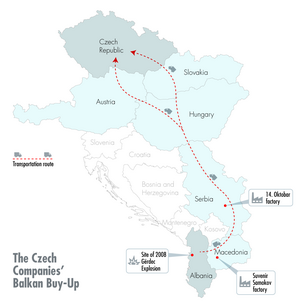 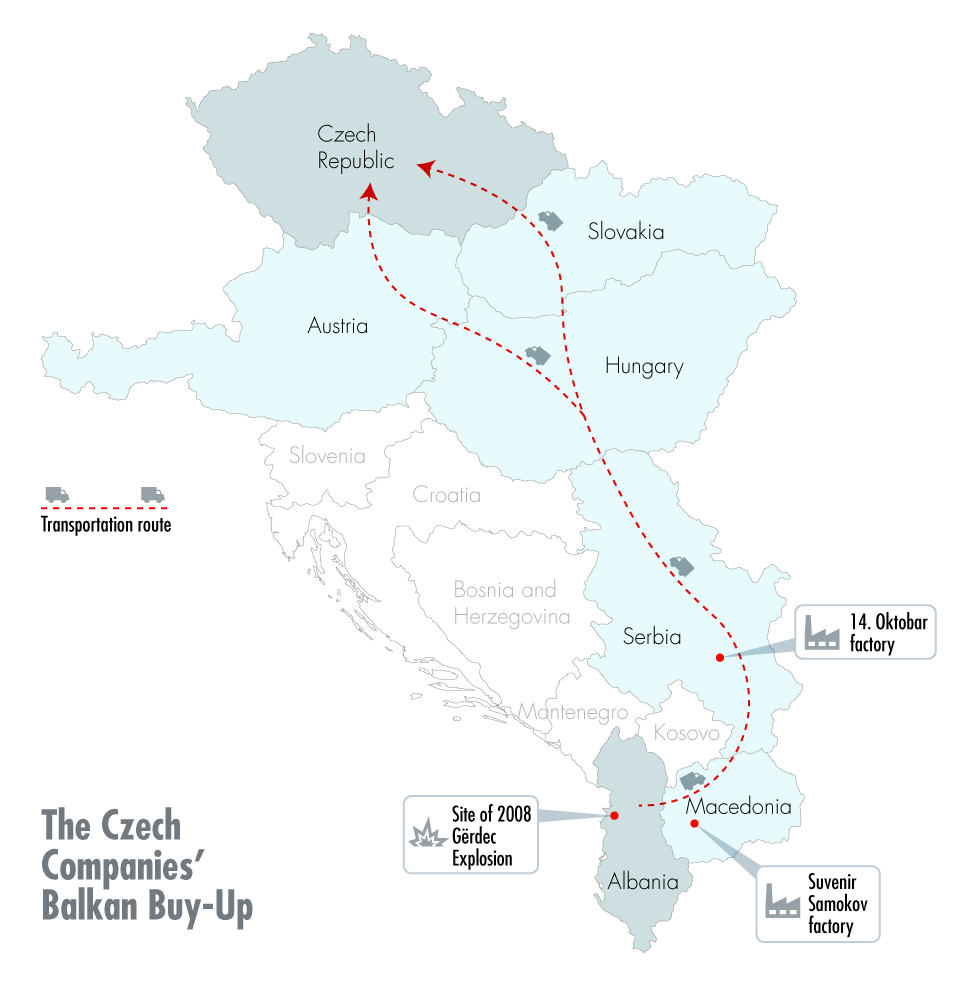 Strnad’s dealings in both countries have involved figures linked to a clique of politicians and security officials accused of running a mafia state under Macedonia’s previous government.

In both deals, Strnad’s firms snapped up the factories at rock-bottom prices.

Behind the scenes, the Macedonian acquisition has raised fears among senior local officials that the Czech businessman may have been more interested in gaining a sought-after export license than in actual production.

“The Czechs were only interested in having a Macedonian license,” said one party to the original purchase, who spoke to OCCRP on condition of anonymity because of fear of repercussions.

Strnad’s first purchase, of the Suvenir factory in Macedonia, handed him a strategic, albeit decrepit, part of the former Yugoslavia’s once-formidable arms industry.

The Communist-era facility sits in a particularly poor part of the Macedonian countryside, hidden behind a rusty chain-link fence in a remote nook between wooded hills. The nearest town, Makedonski Brod, lies about 30 minutes away.

Documents obtained by OCCRP and partners show that Real Trade Praha, a firm linked to Strnad, paid just over €1 million (about $1.25 million) to the factory’s bankruptcy managers in 2010. The Macedonian firm that operates the factory, Sumbro Trade, is now owned by a Czech shell company. The website for one of Strnad’s firms, Excalibur Army, lists the Sumbro ammunition plant as one of its assets.

Accounts from factory workers, as well as customs data, indicate that the factory produced very little actual ammunition in its first five years under Czech ownership – but it may have been involved in other lines of business.

Six current and former workers at the factory who spoke to OCCRP said that ran at far below capacity, producing just a small amount of 9mm ammunition, until 2016. The workers, who had to be kept employed as a condition of the factory’s purchase, worked in staggered shifts.

Some of their tasks involved re-labeling crates that had been shipped in from elsewhere, two of the workers said.

“We were frequently repacking stuff. We were receiving, let’s say, big boxes, and we were not opening them. We were just changing labels,” said a worker who declined to be identified so as not to jeopardize his employment.

“I’m not that smart, I can’t tell you what it was or what we were doing.”

Reporters were only able to obtain export data for the factory’s operating company, Sumbro Trade, for the years 2012, 2016, and 2017.

The 2016 and 2017 data shows exports of ammunition to countries including Slovakia, the Czech Republic, and Ukraine.

The 2012 data, however, is stranger. Those figures show that the company exported an unspecified amount of bathroom and plumbing equipment to the Czech Republic. The Samokov factory does not produce such items.

In response to reporters’ questions, a representative of Real Trade Praha and other Strnad companies said that the intent of purchasing the factory was “not only to trade but also to produce.”

The company, the representative said, only uses Macedonian export licenses for the sale of small arms ammunition produced at the factory, which “is mainly exported to the USA.”

Credit: NOVA TV The entrance to the Suvenir factory in the Macedonian village of Samokov.

Documents obtained by OCCRP and partners, as well as interviews with involved parties, show that, in his Macedonian business, Strnad enlisted the help of Vojislav Sparavalo, a Monaco-based businessman closely associated with Macedonia’s former ruling clique.

Mijalkov, a cousin of former Macedonian Prime Minister Nikola Gruevski, was a key member of a powerful clique that ruled the Balkan country for a decade. Mijalkov’s brother, Vladimir, was appointed advisor to the director general of customs during the Gruevski government. Gruevski’s VMRO-DPMNE party lost power in 2017 after a protracted political crisis.

Mijalkov’s associate, Sparavalo, proved useful to Strnad in 2015, when the failure of the Czech businessman’s factory to meet investment and hiring targets got him into trouble with the board of trustees, threatening his ownership.

On October 2, 2015, Strnad arrived with Sparavalo and one of his executives, Vít Paulíček, to the Macedonian embassy in Prague to lobby for his continued ownership of the factory, according to internal Macedonian foreign ministry correspondence seen by OCCRP.

It’s not clear whether the presence of a Mijalkov associate like Sparavalo at the meeting was decisive in ensuring that Strnad would keep his factory. But the fact that an official memo later produced by the foreign ministry on the meeting expunged Sparavalo’s name suggests that his presence there may have been a sensitive matter.

In written responses to reporters’ inquiries, both Sparavalo and a representative of Strnad’s companies denied his presence at the meeting. Both also denied any connection between Mijalkov and the Czech companies’ business in the region.

Interviews with two Macedonian officials show that Strnad was also able to enlist the help of the office of Czech President Miloš Zeman, whose staff introduced the topic of the businessman’s troubled factory onto the agenda of the president’s February 2016 meeting in Prague with his Macedonian counterpart, Gjorge Ivanov.

The topic was later dropped from the official agenda of the meeting, which was held on the sidelines of a summit of the Visegrad Group of Central European countries, the sources said, again suggesting that the topic was a sensitive one.

Jiří Ovčáček, a spokesman for Zeman, declined to address the matter directly, saying only that “the President has been supporting economic entrepreneurs from many fields for a long time.”

Leaked emails obtained by OCCRP also show that Strnad received assistance on a separate matter from Kiro Šošev, another member of Mijalkov’s clique, who Gruevski’s government appointed as an advisor to the Ministry of Defense. He was serving in this position in 2010 when Strnad’s Real Trade Praha moved into the country.

In an April 2010 email, Strnad company executive Petr Rusek contacted a procurement officer of the Macedonian Ministry of Defense to arrange a visit to a Macedonian airbase to carry out maintenance on Czechoslovak-made Zlin 242 trainer aircraft.

In the email, Rusek makes clear the visit was arranged by Šošev.

According to Emil Dimitriev, the deputy defense minister at the time, Šošev was a good person to know, as his role gave him control of defense logistics. He was also widely seen as a faithful servant of Mijalkov’s network.

“He never showed up [to work]. He was doing whatever he wanted to do. I rarely saw him, and people were complaining,” Dimitriev said.

“He was pretty much a grey eminence,” he said, using a term used to refer to a powerful behind-the-scenes decision-maker.

Asked about the aircraft, a representative of Strnad’s companies wrote that, “according to my best knowledge, [the company] does not know Mr. Šošev and we have never implemented any aircraft maintenance in Skopje.”

Strnad’s companies also made a far more recent move into neighboring Serbia, this time in a more direct partnership with Vojislav Sparavalo.

The ceremonial takeover of the factory, which was attended by Serbian Prime Minister Ana Brnabić, was held on October 14, a date commemorating the city’s 1944 liberation from Nazi occupation.

Documents obtained by OCCRP show that Strnad’s firm bought the factory for almost $4.5 million – just ten percent of its official estimated value. His firm was the only bidder. Four previous rounds of offers had failed to attract any interested investors.

Separate documents also show that, just six weeks later, Sparavalo bought a 15 percent share of the factory from Strnad’s firm, this time at an even steeper discount. The Monaco-based businessman paid just $12,000 for his minority stake in the factory, which would have been worth $675,000 at the valuation implied by Strnad’s purchase price.

Asked about the sales, a representative of Strnad’s companies disputed reporters’ assertions that Sparavalo’s share represented a steep discount of the factory’s real value.

In his own response, Sparavalo also disputed these estimates of the factory’s value.

Aleksandra Janković, deputy director of 14. Oktobar, told OCCRP that the factory currently employs over 160 people and that the management is currently coming up with an investment plan to refurbish it.

The firm does not make munitions or military equipment, but will be involved in the production of “components used by the defense industry” such as bullet jackets, Jankovi said.

“Contracts with third parties are a company secret,” she said.

The story was reported in collaboration with BIRN Albania, the Czech Center for Investigative Journalism, the Crime and Corruption Reporting Network (KRIK), and NOVA TV.