Yacht Club Costa Smeralda is an invitation-only marina on the Italian island of Sardinia that caters to billionaires and their superyachts. Russian business tycoon Valentin Zavadnikov, an avid sailor and former senator from the southeastern Saratov region, has been a member for years.

Between 2006 and 2012, then-senator Zavadnikov spent tens of millions of dollars to build and maintain two lavish superyachts, the Celestial Hope and the Quinta Essentia. His passion was paid for through a system of dozens of offshore companies OCCRP has dubbed the Troika Laundromat, after the Russian investment bank that created and operated it, Troika Dialog. Zavadnikov was once a shareholder and director of the bank.

Zavadnikov’s yachts were paid for by companies within the Laundromat that appear to have been dedicated to his pursuits and pleasures, which even included a wine-scented bedroom and a cinema screen projected onto a waterfall. Because the companies are offshores with opaque ownership, it is not clear whether Zavadnikov or some other party ultimately paid for the yachts and other expenses.

Over seven years, the Troika Laundromat companies channeled at least US$137 million into yachting-related expenditures and businesses linked to Zavadnikov. Troika set up at least five offshore companies he owned or for which he appears to have been the primary beneficiary.

Money funneled through Laundromat accounts at the Lithuanian bank Ukio also financed a yacht racing team founded by Zavadnikov and made up of wealthy energy-industry executives. The team toured the world and built two racing yachts of its own.

Zavadnikov and his daughter Valeria, who owns a vineyard in Tuscany, also used money from the accounts to conduct other private business and pay for personal luxury expenses, including Valeria’s 2011 wedding in Capri.

From Spirits to Sailing 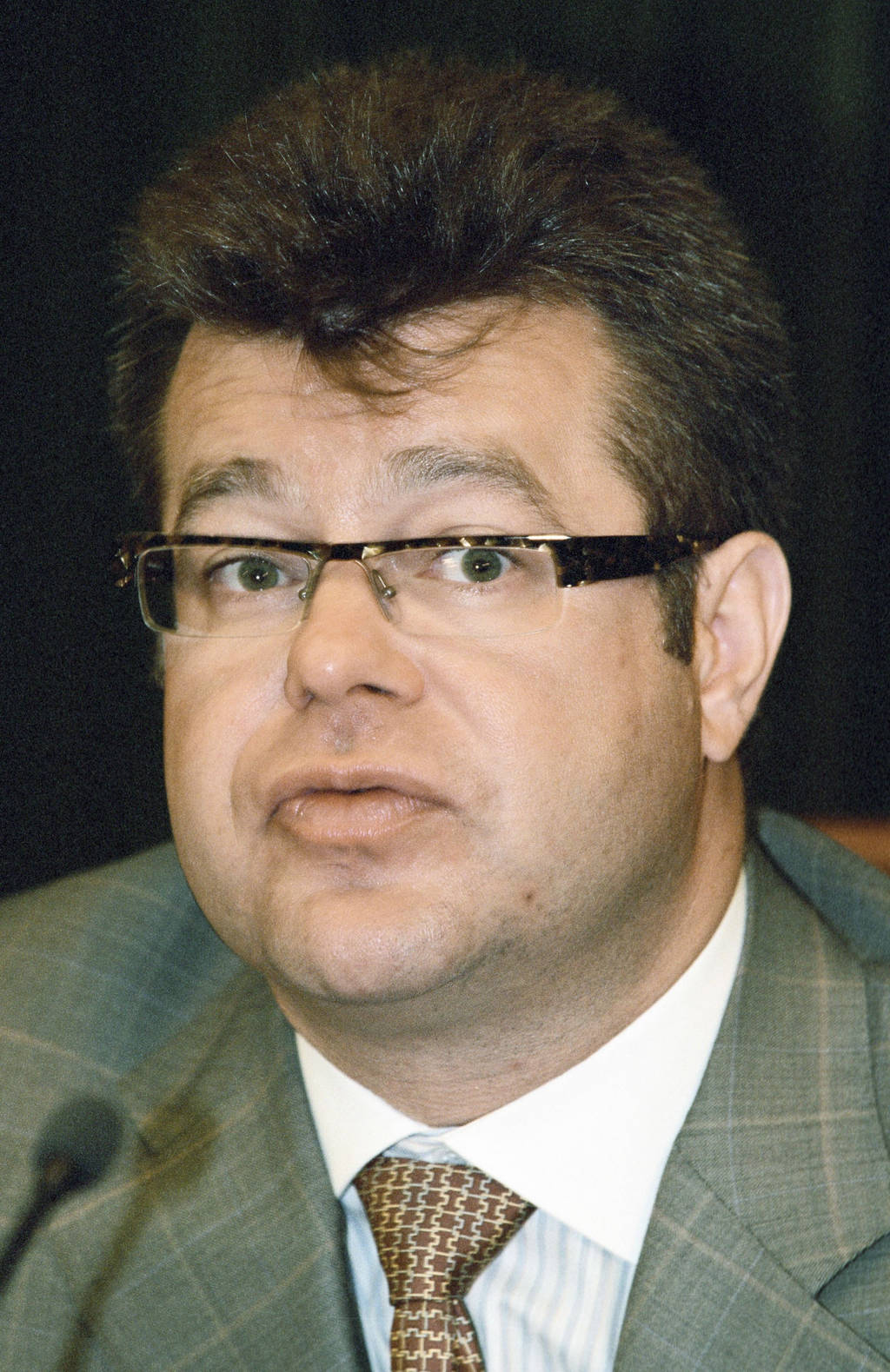 Zavadnikov started sailing as a toddler, but his family gave it up after the breakup of the Soviet Union, he once told Russia Beyond, a state-owned magazine. In the ensuing years, he embarked on a successful business career, most notably co-owning Synergy – now rebranded as Beluga Group – Russia’s largest producer and distributor of alcoholic spirits. From 1998 through 2001 he served as deputy board chairman of the sprawling state-owned electric power company Unified Energy System of Russia (RAO UES), and as a senator from 2001 to 2012.

In 2004, Zavadnikov rediscovered his dormant passion for competitive sailing. Alongside a small circle of powerful businessmen from Russia’s energy sector, including oil magnate and billionaire Leonid Lebedev, he formed the Synergy racing team. It has scooped up trophies from Oman to Portugal.

Over that same period, offshore companies belonging to the Troika Laundromat funneled loans totalling almost $22 million into Lithuanian bank accounts controlled by the companies. It was more than twice the amount that the team’s official sponsors contributed to the same accounts. The money went to build the two racing yachts, as well as for training, uniforms, media coverage, and competition entry fees.

Zavadnikov and four of his teammates own Gateway; and the team’s CEO, Maxim Logutenko, directs Scottsburg. It was Troika that set up Scottsburg’s Ukio bank account, bringing the company into the constellation dubbed the Troika Laundromat.

Gateway and Scottsburg spent 1.6 million euros on Synergy team salaries, plus 250,000 euros on expenses and consulting fees for people who sailed with the team, including Ukrainian Olympian Sergiy Pichugin.

Most of the salaried sailors on the Synergy team held bank accounts at the Latvian bank Parex, previously investigated for corruption by OCCRP. John Christmas, Parex’s former head of international relations, became a whistleblower and told Bloomberg News that Parex existed solely as a destination for illicit funds. (The bank has since folded.)

Gateway and Scottsburg together repaid less than $8 million of the combined $22 million in Laundromat loans. Yet the money kept flowing in.

When asked about the loan pattern, Vitalijus Gailius, a member of Lithuania’s parliament and former head of the country’s Financial Crime Investigation Service (FCIS), said Ukio should have reported these transactions to law enforcement.

Gailius said he couldn’t recall any investigations into yacht-related spending through Ukio accounts or involving Zavadnikov. OCCRP could find no evidence that Zavadnikov has been accused of any wrongdoing, and it’s not clear whether any laws were broken. 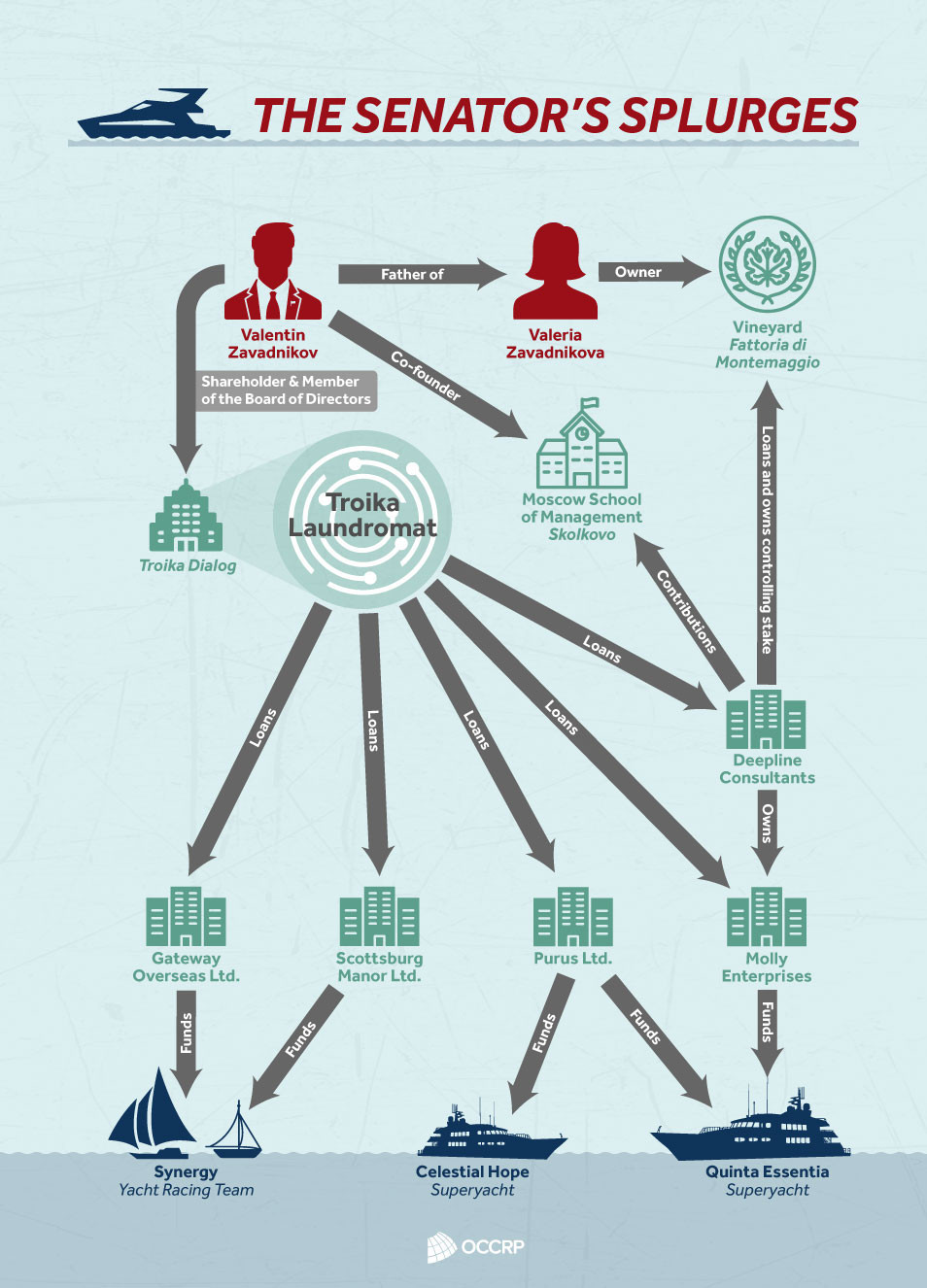 Credit: Edin Pasovic How the Troika Laundromat paid for some of the Zavadnikov family’s pursuits. Click to enlarge.

Confidentiality is serious business in the British tax haven of Gibraltar. Until recently, legislation ensured that the ultimate beneficial owners of companies registered there would remain secret, and it’s these laws that appear to have allowed Zavadnikov to use a shell company from the Laundromat as a proxy. The company was Purus Ltd.

In April 2006, Purus contracted a world-famous Dutch shipyard, Heesen Yachts, to build Celestial Hope, a 47-meter, six-cabin motor yacht. After Heesen launched the award-winning vessel two years later, Zavadnikov told the website SuperyachtNews.com that it made a comfortable base for him during regattas.

Celestial Hope was meant to feel like a beach house in the Hamptons. Its designers were told to take inspiration from “Something’s Gotta Give,” a 2003 Hollywood romantic comedy starring Jack Nicholson and Diane Keaton. Befitting its Russian owner, however, the designers added a steam bath and art from their client’s home country, including “Blue Birds” by acclaimed modernist painter Andrey Remnev.

Over about 18 months, Purus wired Heesen Yachts a total of 13.6 million euros. The shell company also made dozens of payments for various services rendered for Celestial Hope, including purchases of wine and spirits, and cocktail party catering.

In just two years, Purus spent more than 20 million euros, mostly on yacht-related expenses, from crew training to “delivery of extra water toys” and even photo shoots. The money arrived as loans from elsewhere in the Troika Laundromat and was spent almost immediately.

The complex nature of the system obscures most of the money’s true origin. But in January 2008, Purus received 3,000 euros from Roberta Transit, a Laundromat company used in the enormous tax theft scheme uncovered by the Russian lawyer Sergei Magnitsky. He died in prison a year later after trying to get Russian authorities to investigate. That money was immediately wired to René van der Velden, a renowned Dutch naval architect.

Credit: Tony Hisgett/CC-by-SA-4.0 The Quinta Essentia in 2012. Its burgundy-colored hull is a tribute to the Zavadnikov family’s Tuscan vineyard.

For the passionate sailor, a single superyacht wasn’t enough. Before Heesen had even completed Celestial Hope, Zavadnikov had already begun planning a more impressive encore.

In 2007, he enlisted the same group of contractors for a 55-meter yacht, this one featuring a gym, massage parlor, and glass elevator. Passengers could unwind in its on-board hamam or watch a film projected onto a waterfall that cascaded into the Jacuzzi pool on one of its decks. The Quinta Essentia was at the time the largest vessel the Heesen shipyard had built.

Purus was not the only Troika Laundromat company to fund Quinta Essentia. Between 2009 and 2011, another Gibraltar-based Laundromat company, Molly Enterprises, spent more than 42 million euros on yachting, including kitting out Zavadnikov’s new vessel with a 10,000-euro piano and a 24,000-euro coffee table.

With a bigger and better yacht on the way, Purus sold Celestial Hope for 32 million euros in December 2009.

Zavadnikov’s superyacht spending spree was overseen and facilitated by Troika Dialog, the same Moscow investment bank that constructed the Troika Laundromat. When it came to constructing the yachts, Troika employees identified themselves as contacts for Purus and Molly, and sent contractor invoices to Ukio’s anti-money laundering department.

Vitas Vasiliauskas, chairman of Lithuania’s Central Bank, was in charge of the state intervention that put Ukio out of business in 2013. Upon hearing of the offshore accounts dedicated to yachting, he told OCCRP the expenditures sounded like “unusual activity and unusual operations.”

“I assume that every company notified the bank of its planned activities when opening its account. If the purpose of these payments did not match those activities – and this seems like paying for the beneficiaries’ private needs – this is not a usual business operation,” Vasiliauskas told OCCRP. “Definitely, it had to raise questions for the bank’s employees.”

There is no evidence Ukio Bankas employees raised such questions.

Although Purus did inform Ukio that it was involved in ship management, neither Purus nor Molly mentioned ships or yachts to the Gibraltar registry as the purpose of their business. Both companies, instead, listed over 50 different industries, from jewelry to livestock. And while Gateway told the registry that it built and held yachts, it also claimed to operate as a banker, a campsite, and an undertaker.

From Water to Wine

“In each cabin, we have a scent that represents one of the four basic elements of earth, fire, air and water,” Valeria Zavadnikova, the senator’s daughter, told the magazine Yacht Capital. She explained that Quinta Essentia is a Latin phrase meaning “fifth element,” which she considered to be wine.

“In the fifth cabin, the owner’s suite, there is the scent of wine, which for my family at least, is the fifth element,” she said.

The family’s love of wine, and the Troika Laundromat’s ties to it, didn’t stop at scented rooms. Quinta Essentia’s burgundy-colored hull is a tribute to Fattoria di Montemaggio, a merlot vineyard in Tuscany that belongs to Valeria Zavadnikova.

Both Montemaggio and Molly Enterprises – the main company behind the yacht – shared an owner, a Cyprus-based Laundromat company beneficially owned by Zavadnikov called Deepline Consultants.

Deepline would feature in many of Zavadnikov’s ventures, as would other Laundromat companies. Sailing, wine, and weddings — the Troika Laundromat would pay for it all.

Neither Zavadinikov nor his daughter responded to multiple requests for comment about the source of this money or the shell companies behind their boats and business dealings.

When contacted, both Heesen and Yacht Club Costa Smeralda said they were unable to comment on individual clients. The club said that, as a sporting association, it was under no legal obligation to investigate any financial irregularities its clients may have.

The club said it “evaluates candidates on the basis of their reputations and their compliance with the club’s principles.” In the case of Zavadnikov, a representative said, “Nobody protested.”

Indeed, there is no evidence that Zavadnikov or his daughter committed any crimes. But the complex financial structures set up by Troika make it difficult to trace how his yachts and luxury purchases were funded. Such systems can be used for criminal activity, but because they are opaque, it would take an investigation to determine whether any laws were broken.

Max Heywood, author of the 2017 Transparency International report Tainted Treasures, described the pattern of unrepaid loans spent on yachts as “a massive red flag” that should have grabbed the attention of regulators.

But because the luxury goods sector is rarely identified as high risk, he said, there is a gap in global standards – leaving many jurisdictions to rely on voluntary best-practice guidelines.

“The basic nuts and bolts of anti-money-laundering supervision are just not being enforced in these sectors,” Heywood said. “Unless there’s oversight and [these guidelines] are linked to sanctions and inspection – which is nowhere near the case – they’re basically paper tigers.”