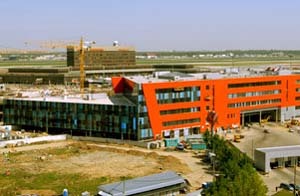 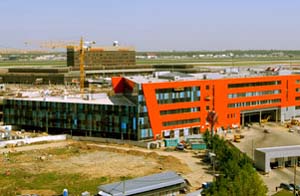 Moscow’s Sheremetyevo Airport where ticket prices were increased as much as 50 percent to cover the cost of fuel scams.

Phantom companies that sold fuel to Moscow’s main airport at inflated prices were connected to a network of companies and proxies, dubbed the “Proxy Platform,” uncovered by the Organized Crime and Corruption Reporting Project (OCCRP) in a project published late last year. Russian authorities are currently investigating one case where these same Latvian banks and proxies were involved in a chain of shell firms that sold fuel destined for Moscow’s airport to each other in a convoluted scheme that increased the price up to 40 percent. The added costs were passed on to travelers who for years paid extra for their airline tickets in Moscow.

Between 2008 and 2010 the Russian tax authority audited the city’s main airport and the oil companies that sold fuel to it. The investigation started after the 2008 “fuel crisis”, when some of Moscow airports did not have enough fuel to meet the needs of airlines.

Prices spiked. The problem became so acute in 2009 that Deputy Prime Minister Sergei Ivanov publicly told Prime Minister Vladimir Putin that the fuel market was full of “black bugs,” referring to the phantom companies. Putin himself demanded authorities get rid of the “bugs.”

The investigation proved Ivanov right. Documents show that Moscow’s Sheremetyevo airport was at the center of the fuel related fraud. The findings are featured in an ongoing criminal court case by the investigative department of Russian police. The airport is owned by the Russian government and from 2003 till 2008 airport authorities chose to purchase fuel through a long chain of intermediary phantom companies rather than directly from refineries.

A case taken from the investigation showed how one of the gas purchase deals worked.

A number of other phantom companies were used in other deals. Similarly, they used proxies and phantom shell companies.

Tax authorities, during the investigation, interrogated representatives of legitimate suppliers who said they would have liked to have sold fuel directly to Sheremetyevo without the unnecessary chain of middlemen. In fact, they made overtures to Sheremetyevo officials but were told the airport insisted on buying from the companies. Airport officials went so far as to guarantee payments for the companies. Tax authorities also proved that the fuel went directly from the oil plants to the airport anyway, and that all of the agreements between the phantom companies were unnecessary.

The real purpose of that complex distribution system, according to tax authorities, was tax evasion and justifying the price increases from the suppliers to the airport. According to documents, in just 2006 and 2007 phantom companies earned at least US$200 million dollars in unnecessary markups. And the state lost more than 1 billion rubles (US$40 million) in taxes. General Director of the airport Mikhail Vasilenko told the Russian website Slon.ru that 50 percent of the cost of an airline ticket comes from the cost of fuel.

The corruption would have cost travelers by inflating ticket prices. That money was laundered through the same Proxy Platform that OCCRP described in its investigation.

The money paid to the phantom companies by the airport was sent to two insurance companies in Moscow. The director of both companies was Maxim Vedenin. In 2011 Vedenin was sentenced to 19 years in jail for robbery and murdering two prostitutes.

According to a press release, in June of 2010, a Moscow landlord called police and told them that she had found the body of 32-year-old Maria Andreeva, her tenant, in a closet of the rented flat. Andreeva had been shot in the head and stomach. A police investigation showed that Andreeva was a prostitute and used the flat to service clients. Police identified Vedenin as possibly one of her last clients. Vedenin was arrested near his home, where police found a gun, bullets and a silencer. During an interrogation Vedenin acknowledged that prior to 2008 he headed an “investment company” that went bankrupt. He was unemployed after that until he decided in the spring of 2010 to earn money by robbing prostitutes. Vedenin would call them as a client, go to their flats, and threaten them with the gun and rob them. Police also found out he was also involved in the murder of a Ukrainian prostitute.

Bank transactions show that prior to 2008 Vedenin helped launder the money for the phantom companies. From the insurance company where Vedenin was director, money was routed to different offshore companies including:

Besides using Vedenin’s company, suppliers had two other ways to launder money. Hundreds of millions of rubles from the phantom fuel companies went to pawnshops and from there cash payments were made to individuals who acted as proxies for the real recipients. Tax authorities checked those individuals and believe they did not receive any money although their passports were used. The pawnshops in question were liquidated in 2009 after the investigations started.

According to the investigation, money from bogus fuel suppliers also went to two other phantom companies, Unikom and Almatrade, both of which were registered in the names of individuals who sold their passport details to registration agents. From these companies money went offshore to the following companies.

The banking transactions of these offshore companies indicate that they received money or sent money to dozens of other phantom companies all over the world including companies in Kazakhstan, Uzbekistan and other former Soviet countries. Just like other fraud cases perpetrated through the Proxy Platform, Latvian banks were used to divert money and hide the real beneficiaries of these transactions.

One of the companies that received money from Vedenin’s insurance company was London Alliance Corp, whose director is listed as the companies Ireland & Overseas Acquisitions LTD, Milltown Corporate Services LTD, and Inhold LTD which all belong to Stan Gorin and Erik Vanagels. Gorin and Vanagels are notorious Latvian proxies whose names were used in hundreds and maybe thousands of companies. Many of the companies they have been proxies for have been involved in fraud ranging from tender fraud to overcharging for flu vaccines.

Meister Developers Ltd, which received money from Unikom, had transactions with both the Russian phantom companies that participated in the fuel fraud, as well as Scanex Limited, a company directed by Vanagels. Scanex was also transferring money to Nomirex, a fraudulent money laundering company featured in OCCRP’s Proxy Platform series.

Pool Service Ltd, which received money from Almatrade, sent money to dozens of other offshore companies including Greenlake Systems Inc and Oceania Transit Corp from Panama, where again Vanagels and Gorin served as directors.

By Novaya Gazeta and The Organized Crime and Corruption Reporting Project

Lev Leviev’s Empire: Diamonds and Real Estate Across the World
Following the Magnitsky Money
The Latvian Proxies
Behind the Proxies