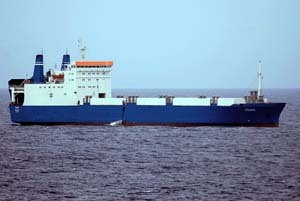 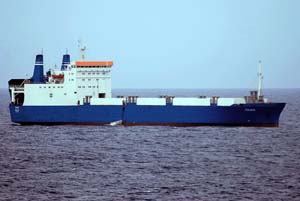 Ukrainian merchant ship the MV Faina was carrying weapons to South Sudan when it was hijacked.

Latvia, a country on the coast of the Baltic Sea and a former part of the Soviet Union, has been at the heart of a number of informal networks of companies fronted by proxies that laundered money for criminal groups. Last year, the Organized Crime and Corruption Reporting Project looked at some of these companies in its series called the Proxy Platform. The tiny country supplied both the proxies and the banks through which hundreds of millions of dollars travelled through.

And at the heart of many of these deals were two Latvian proxies: Erik Vanagels and Stan Gorin. Some of the hundreds of companies they represent, stretching from Panama to Eastern Europe, were involved in a series questionable or fraudulent businesses ranging from weapon shipments to Africa to Ponzi schemes. It is not clear whether Gorin or Vanagels play any role beyond their proxy status but the likelihood is they do not.

However, their names are the calling cards of a deeper network.

When the merchant vessel MV Faina, owned by a Panamanian company, managed by a Ukrainian company and sailing under a Belizean flag, was intercepted on its way from Odessa to the Kenyan port of Mombasa by Somali pirates in September, 2008, the world watched. The international concern focused not only on the plight of the crew of 21, but on the cargo as well. Much to the surprise of both the pirates and observers, the MV Faina carried 33 Soviet-made T-72 tanks, grenade launchers and small arms ammunition. The international community was not just worried about the armaments falling into the hands of pirates. With Ukraine having a track record of unofficial weapons transfers to embargoed countries, suspicions grew – backed later by documentation and witnesses - that the arms consignment was destined for the rebel government of South Sudan. Sudan at that time was under an EU arms embargo.

Cascado AG’s president was the Latvian proxy Vanagels and the treasurer was fellow Latvian proxy Gorin. Systemo AG had the same two proxies only with their titles reversed.

The MV Faina is only part of the story of these proxies. According to an investigation published in 2009 by the Small Arms Survey (SAS) in Switzerland, the MV Faina’s cargo was only one of at least three major Ukrainian maritime arms shipments since September 2007, carrying anti-aircraft guns, ‘Grad’ rocket systems, T-72 tanks and ammunition, and at least five containers of AKM assault rifles. According to Mike Lewis, the author of the SAS investigation, the company chartering the first shipment was a UK-registered company. Marine Energy Trading Company LLP (METCO), with the charter contract signed by Vanagels, Gorin and another Latvian, Voldemar Spatz, representing two British Virgin Islands-registered companies: Milltown Corporate Services and Ireland & Overseas Acquisitions Ltd.

These two companies play a role in many different cases and are always associated with Vanagels and Gorin. Besides guns, they are also connected to frauds involving pharmaceuticals and other businesses.

In June 2011, a court in the state of Oregon in the United States, ordered a “local” company, Olden Group LLC, to pay back the Ukrainian state-owned company Ukrvaktsina nearly US$60 million. The complaint lodged by the Ukrainian company says that Olden Group had conspired with Interfarm, another Ukrainian company, to overcharge the state company by millions of dollars for vaccine purchases through fraud, money laundering and other criminal acts. As part of the scheme, Interfarm and Olden Group used a set of shell companies to sell the same products over and over to inflate prices and conceal their activities. Olden Group had bank accounts at Latvia’s Parex Bank.

Olden was not the only company. An investigation commissioned by the Ukrainian government and done by US law firm Trout Cacheris established that a majority of the US$44 million in vaccine, pharmaceutical and medical supply purchases in 2008 and 2009 had been transacted through shell companies acting as intermediaries to mark up purchase prices by as much as 50 percent. According to the investigation, among the companies involved in the corrupt scheme were a number linked to Vanagels and Gorin, and to another Latvian name, Juri Vitman.

Vitman was named in the investigation as the director of the British company Eurostate. Eurostate acted as an intermediary, selling vaccines to one of the five approved pharmaceutical importers: Tri-Tsentralny Aptechny Sklad. Eurostate’s secretary was a US registered firm named Bonita LLC which in turn was set up by the two companies, Milltown Corporate Services and Ireland & Overseas Acquisitions Ltd., with directors Vanagels and Gorin, according to Trout Cacheris. Vitman was also named in the same investigation as the director of a British company named Emansis Ltd. in connection with the fraudulent procurement of medical equipment from China. Emansis Ltd. also has as its corporate director a Cyprus company named Fynel Limited which is owned by Gorin, with Vanagels as one of its directors.

An Even Wider Net

Gorin, Vanagels, and Vitman are linked as directors and shareholders for hundreds of companies in the UK, New Zealand, US, Ireland, Cyprus as well as companies in classic offshore jurisdictions such as the British Virgin Islands and Panama. The companies they control in turn serve as the directors or shareholders of hundreds or perhaps even thousands of more companies. Their primary companies are Milltown Corporate Services and Ireland & Overseas Acquisitions, (incorporated in Ireland, British Virgin Islands and Belize), Fynel Ltd, incorporated in Cyprus, Jargon Management, also in Cyprus, and the three Panamanian companies: Systemo AG, Cascado AG and Integri SA.

And their activity is not restricted to corrupt Ukrainian state procurement or export deals. The omnipresent companies are involved in dozens of lower level import-export invoice fraud and sub-invoicing cases in Russia and other CIS countries. Typically these are tax evasion cases that sap state budgets of revenues and leaves public employees – teachers and doctors – impoverished, and infrastructure crumbling.

Loginex Projects, a company established by Gorin and Vanagel’s Ireland and Overseas Acquisitions and Milltown Corporate Services, was named in a British High Court decision October 2011 as one of a number of companies used by Mukhtar Ablyazov, former head of Kazakhstan Bank BTA, to illegally move slightly more than $1 billion to an account in the Latvian based Trasta Kommercbanka.

They are also present in cyberspace – in particular in pyramid investment scams such as High Yield Investment Plans (HYIP). In December 2009, the US Securities and Exchange Commission (SEC) cracked down on a Latvian Ponzi scheme called Rockford Funding, run by Latvian-born 32 year old Genadi Yagodayev, The SEC alleged it had defrauded investors of over US$11 million in nine months.

The companies listed by the SEC as processing the funds included British companies set up by Vanagels’ Milltown Corporate Services and Gorin’s Ireland & Overseas Acquisitions, and a Panamanian company set up by Cascado, Integri and Systemo. Another HYIP pyramid scheme that collapsed in December 2010 – “Cherry Shares” – was traced back to New Zealand companies listing Lativan Inta Bilder and Vanagels as directors. Money from the Ponzi scam was wired to accounts at Latvian banks Rietumu Bank, Regional Investment Bank, Trasta Komercbanka and JSC Multibanka, according to the investigation.

Lev Leviev’s Empire: Diamonds and Real Estate Across the World
Following the Magnitsky Money
Moscow Airport Used in Fuel Fraud
Behind the Proxies