At a recent performance on Kyrgyzstan’s independence day, an improvisational poet known as an akyn memorably called out the country’s endemic corruption in front of its president, top officials, and foreign guests.

To the strains of a traditional Kyrgyz lute, the akyn denounced “big ones who stealthily fill their pockets,” “electors who have grabbed the ballot boxes and steal votes,” and the country’s customs service, where “money is taken out in buckets.”

The last allusion would not have been lost on his audience. For years, as revealed in a previous series of investigations, deputy customs chief Raimbek Matraimov enabled — and profited from — a smuggling empire run by a secretive Uighur family.

Matraimov is no longer in the customs service. But over the years, he and his brothers, who still hold important public functions, have amassed vast riches — and converted them into influence.

From living an extravagant lifestyle on modest declared salaries, to secretly taking control of private customs facilities and trade routes, to pouring wealth into a crucial election campaign, the Matraimovs embody many of the brave poet’s warnings about the dangers of corruption in the heart of Central Asia.

How to Build a Customs Empire

The Matraimov family has long used its questionable wealth to gain social and political influence in its native Kyrgyzstan. For this year’s parliamentary elections, they’ve pulled out all the stops.

The ‘Beautiful’ Life of a Kyrgyz Customs Official

Raimbek Matraimov is a powerful Kyrgyz political operator known for his massive wealth. This investigation into his wife’s social media accounts reveals the opulent lifestyle his family enjoyed even as he declared only a modest salary in the country’s customs service.

A private resort village on the shores of Kyrgyzstan’s Lake Issyk Kul is among the clues that connect former Kyrgyz customs boss Raimbek Matraimov and notorious criminal leader Kamchy Kolbayev.

Not much has changed in Kyrgyzstan’s customs service since Matraimov’s firing and conviction. His successor, Zamirbek Karashev, appears to be part of his network — and his family also enjoys the finer things.

An open-source investigation suggests that the families of Raimbek Matraimov, Kyrgyzstan’s disgraced former deputy customs chief, and Zamirbek Karashev, his former underling and eventual replacement, vacationed together in Thailand. 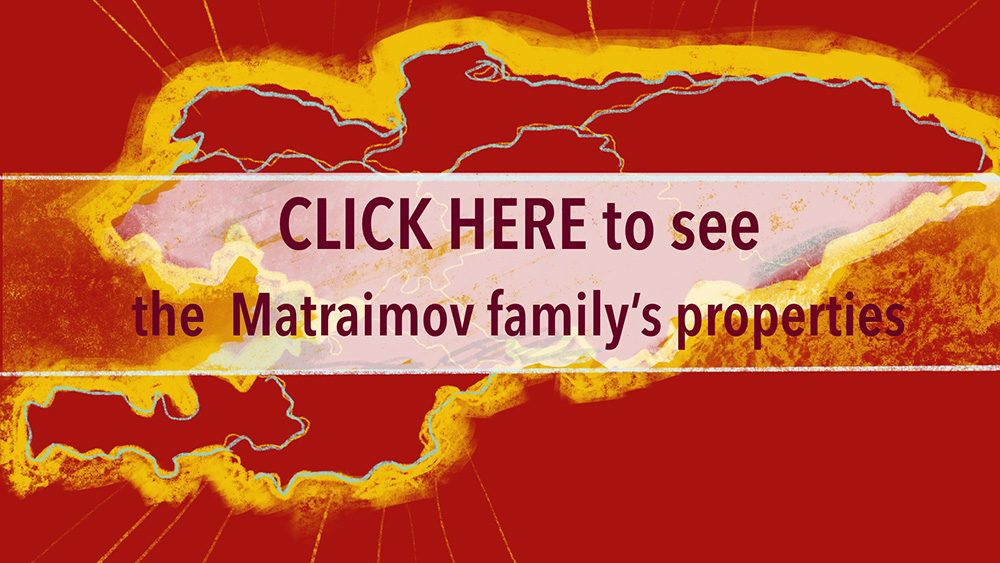 According to an associate, Kyrgyzstan’s former deputy customs chief had to raise money from friends and relatives to pay the fine. This didn’t appear to prevent him from buying a new penthouse right next door to his old one.

After agreeing to compensate the Kyrgyz government for years of corruption, the powerful former official went on a last-minute shopping spree, buying up apartments across Bishkek to give to the authorities.

When the State Went Missing

Here’s how Kyrgyz citizens banded together during a week of political chaos to take care of each other when their state couldn’t.

Enraged over an election they saw as undermined by rampant vote-buying, thousands stormed Kyrgyzstan’s parliament and presidential offices and took over government buildings throughout the country in an overnight revolution that on Tuesday forced election officials to declare the election void, OCCRP member center Kloop reported.

Over the span of five years, one man funnelled hundreds of millions of dollars out of Central Asia. What he knew may have cost him his life. But before his murder, he shared with reporters a trove of documents that reveal the source of this colossal wealth: A secretive family that ran an underground cargo empire with the help of a powerful political patron.

'His Murder Is Necessary': Man Who Exposed Kyrgyz Smuggling Scheme Was Hunted by Contract Killers

A money launderer told journalists what he knew about a secretive smuggling empire and a senior Kyrgyz official who enabled it. Now, leaked documents shed light on his shocking murder.

Despite receiving a death threat, the operator of a massive Kyrgyz money-laundering scheme shared hundreds of documents to corroborate what he knew. He promised even more — but then he was murdered.

The wife of Raimbek Matraimov, a powerful former Kyrgyz customs chief, has a joint investment in Dubai with a shadowy Uighur family, the Abdukadyrs. Back in Central Asia, that family built a thriving cargo empire thanks to corruption in the customs service.

Nearly half of donations received by a well-known Kyrgyz charity run by the powerful Matraimov family have been linked to an illicit underground network.

The Mystery of the Missing £5.6 Million

One of the last claims made by Aierken Saimaiti, a self-confessed money launderer who was murdered in Istanbul last November, was that he sent millions of pounds to London for a powerful former Kyrygz official. What happened to the money? Here’s where the evidence leads.

This project is a collaboration between OCCRP, Kloop, RFE/RL’s Radio Azattyk, and Bellingcat.

Reporting: Many local reporters contributed to these stories. They cannot be named to protect their safety.