In a small, well-appointed boardroom just steps from the Romanian Government Building, Laszlo Gyorgy Kiss sketches on a sheet of paper to help an undercover reporter with him understand. The reporter from the Organized Crime and Corruption Reporting Project (OCCRP) has told Kiss he wants to hide his ownership in a large oil deal, he says. 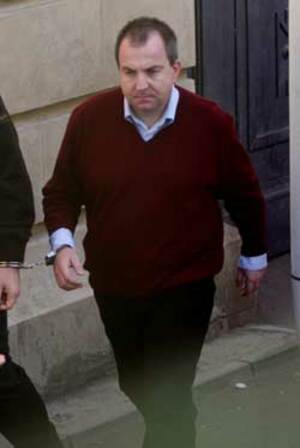 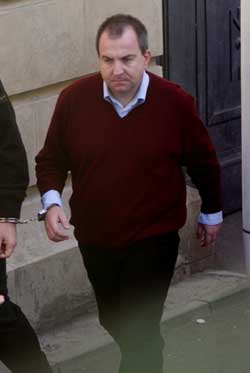 Romanian Offshore consultant Laszlo Kiss being taken by police to court in November. Kiss is currently being held pending charges.

Kiss looks exactly like you’d expect an accountant to look – medium height, going a little bald, in a neat grey suit, speaking in a low, even, tone, without any inflections. But what he is outlining isn’t dull accounting at all. He is explaining how the reporter can use offshore companies to avoid millions of dollars in Romanian taxes and customs fees.

He draws a line from a dot on the sheet representing the Seychelles Islands off the coast of Africa to other forms representing Cyprus and Nigeria. Then a line to a Kiss company in Bulgaria and finally to the key location – the US state of Delaware.

“What you need is a triangulation,” Kiss says in his patient, teaching tone. He turns the sheet to the reporter and added: “This is the mechanism I propose to you.” He calls it tax optimization.

When reporters showed the sheet to authorities later they called it something else: fraud.

The Business of Making Businesses

Like Kiss, who operates Lamark Tax Planning Consult SRL, dozens of other accountants, lawyers and businessmen in Eastern Europe, and thousands more around the world, are in the business of helping people set up offshore companies.

Within weeks of Kiss’s lesson to OCCRP, Romanian police arrested him for masterminding a plan to embezzle money from a Romanian company through offshore businesses probably to help the company evade taxes. He is in jail awaiting a hearing. Kiss is one of the few registry agents OCCRP could find ever arrested for helping evade taxes. OCCRP found there should be a lot more.

Four OCCRP reporters talked with more than a two dozen companies that advertised the registration of offshore companies and many were told the same thing. Each promised to help the reporters avoid taxes or hide assets. Nobody asked where the reporters got the money or why they were trying to hide assets or ownership.

Tools of the Trade

Back in the boardroom, Kiss advises the reporter to that the key to avoiding taxes is lowering the price of the product. He suggests selling the product, in this case 1,500 tons of industrial oil that is to be imported from Nigeria into the European Union (EU), at a very low price – to himself.

“Here, in Nigeria, you purchase the merchandise through an offshore company from Seychelles or from Delaware,” he explains. “The offshore company then sub-invoices the imports to a Romanian company. From this point, we make the triangulation. We immediately deliver the merchandise to a Cypriot company. It, in turn, re-sells it to a company in Bulgaria, and from there it returns back to Romania.”

Kiss calls his slick plan “sub-invoicing,” another of the dull euphemisms common in the industry. At each sale, the price changes but the changes are fake – for tax purposes only – because the reporter will own all of the companies himself. For example, an offshore company in Delaware buys the oil in Nigeria for €100. It sells it to a Romanian company for €1. The Romanian company then sells it to a Cyprus company for €1.1. The reporter then pays taxes in Cyprus on the reduced price.

But that is illegal said Sorin Blejnar, president of the Romanian National Agency for Fiscal Administration (ANAF).

“Any operation of this kind, which involves sub-invoicing or changing figures, is called either (tax) evasion or money laundering,” Blejnar. Another expert agreed.

“When you resell the same goods well below market prices, under-evaluating it, you are guilty of several crimes. It is clear that the network you are describing to me is a typical money-laundering network,” said Ionel Blănculescu, former minister-delegate of Romanian National Control Authority.

Kiss explains that the Republic of Cyprus is the key strategic location for import-export businesses in Europe. The island country has the lowest tax rate in the EU since it joined in May of 2004 and it is the most commonly used offshore haven The maximum VAT rate on imports is 15 percent and there is no tax for goods heading to other EU countries. There are no custom fees for several types of African mineral oils. Corporate tax rates for companies are just 10 percent and excise taxes are low.

“It is clear that those involved do not want to pay the VAT and their customs duties. Then, the goods can circulate unhindered in the EU. Without question, the undervaluation is not right at all. People actually change the amounts in the transaction documents,” Blejnar said.

But Cyprus is just the first stop in the “triangulation”. The second is Bulgaria.

Once the goods are imported into Cyprus, they are immediately resold to a Bulgarian company, but at a price near the market price of €200. The profit remains in an offshore account of the company in Nicosia, Cyprus. Kiss says the Bulgarian step helps hide the path of the goods.

“You do not need to find a company in Bulgaria: we have one,” Kiss says. ”But here the goods have to physically circulate. We do not necessarily need to store it - we can pass it through Bulgaria in a single day.”

While there are no taxes between EU countries, companies must have the paperwork to prove the goods were actually shipped.

Once in Romania, everything can come out in the open and the African industrial oil can enter the normal market. The Bulgarian company sells to a Romanian company for a price that also includes a fee for Kiss.

“It will cost you at most 1 percent of the business. Maximum 1 percent. That would be our fee,” Kiss tells the reporter. 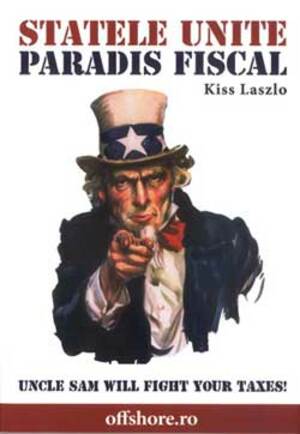 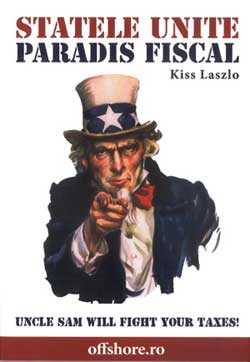 Another key element of the process is hiding the real owners. Despite the US government’s outspoken criticism of offshore companies, Delaware is the location many offshore services companies including Kiss’s prefer. He even published a book on how to cheat on Romanian taxes called “United States, Tax Heaven - Uncle Sam Will Fight Your Taxes!”

“We have already booked companies in Delaware” says Kiss recommending a company called Ecovolt Inc LLC among a list of pre–registered companies with generic sounding names. Kiss said he almost has a factory in Delaware producing companies. Actually, it is a Delaware based company registry firm called Delaware Intercorp, Inc.

Kiss says that as long at it does not do business in the United States, the offshore company will not report to the US tax collection authorities. It does not have to pay taxes and it needs little accounting.

Kiss explains that ownership is easily hid. Proxies, or people willing to allow their name to be used as an owner in exchange for money, sign the company registration documents. Lawyers, registration agents, or someone off the street all do this. The real beneficiaries are camouflaged behind a declaration of trust, a legal document that states the proxy is holding the property for another party. Or the real owner holds undated resignations of the proxies that he can use at any time. These documents are usually kept secret.

The reporter tells Kiss he has recently come into a large amount of money and needs to hide it. Kiss asks no questions but immediately sketches out another offshore scheme.

Kiss recommends the tiny Seychelles Islands in the Indian Ocean this time. Again, a generic name of a preregistered company is chosen – M Intelligence Ltd (Seychelles). The company will be capitalized with the reporter’s mystery money. The company will sell shares of itself to investors who will own that company.

Using another tool in the offshore kit, Kiss recommends the company use bearer shares. Bearer shares are stock shares owned by whoever has possession of them. There is no registry of owners kept. A series of proxies will buy the initial shares in groups and then transfer them to the reporter. Once the shares are transferred, they are untraceable.

Kiss’s bill for the four offshore companies is €12,000 plus 1 percent of the take. The invoice is issued by Lamark Tax Planning Consult SRL from Bucharest, where the reporter met Kiss. Behind this Romanian SRL lies, naturally, a web of offshore companies that spread like a spider’s web to all continents. (See Sidebar on the Taylor Kiss network)