What is China Tobacco?

Founded in 1982, it’s by far the world’s biggest tobacco company, supplying 43.6% of the global market for cigarettes. It has a monopoly over all aspects of China’s tobacco industry, including growing, purchasing, and allocating tobacco leaf, and manufacturing and distributing cigarettes and other tobacco products. 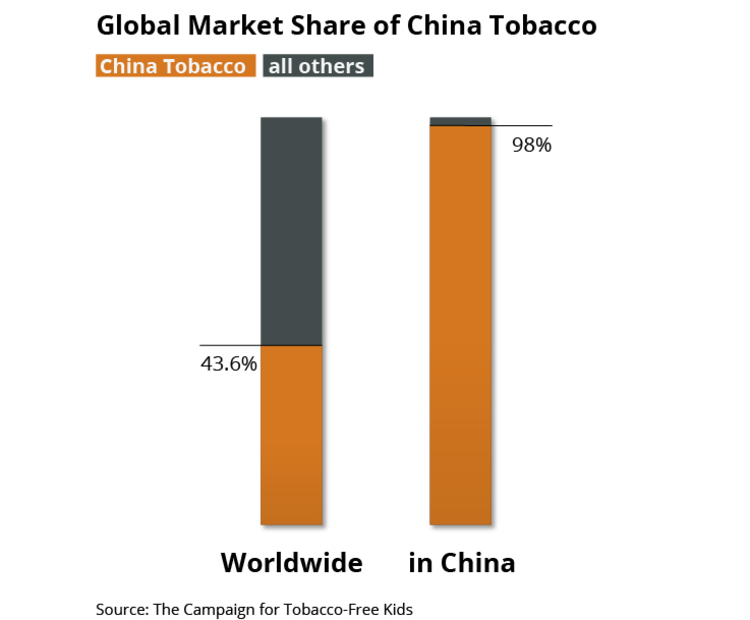 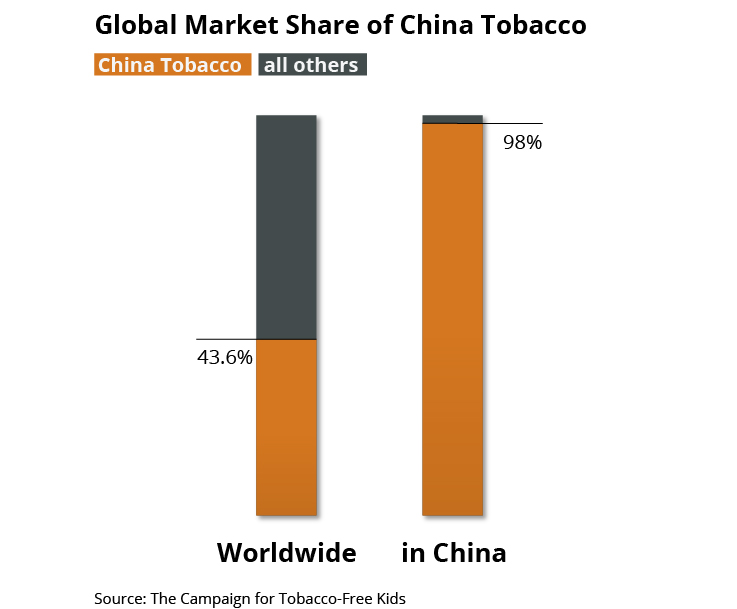 For most of its existence, CNTC focused on selling cigarettes within China. As the world’s most populous country, it’s also one of the world’s biggest markets for tobacco products.

But in 2003, with domestic revenues waning due to greater competition from abroad and a gradual reduction in the number of Chinese smokers, it launched what it dubbed the “Go Global” strategy to start exporting significant amounts of cigarettes around the world.

It has expanded its global reach to 20 countries, operating through 34 offshore facilities that include sales offices, manufacturing plants, and specialized procurement companies, according to the most recent available data, from 2019. 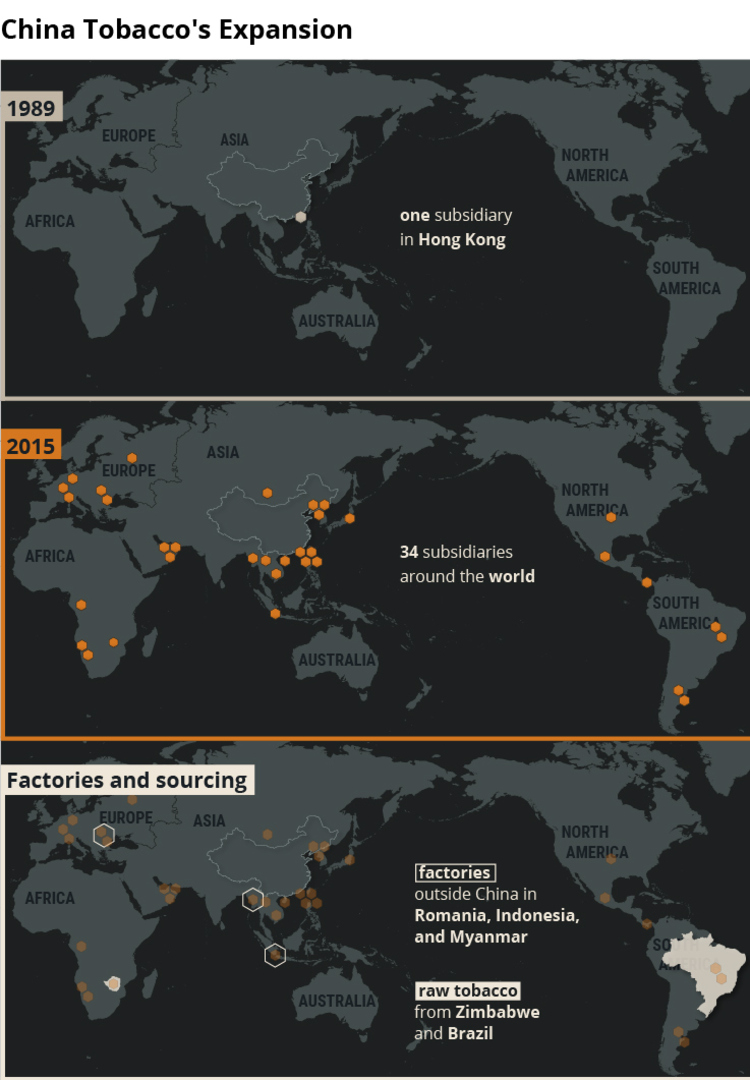 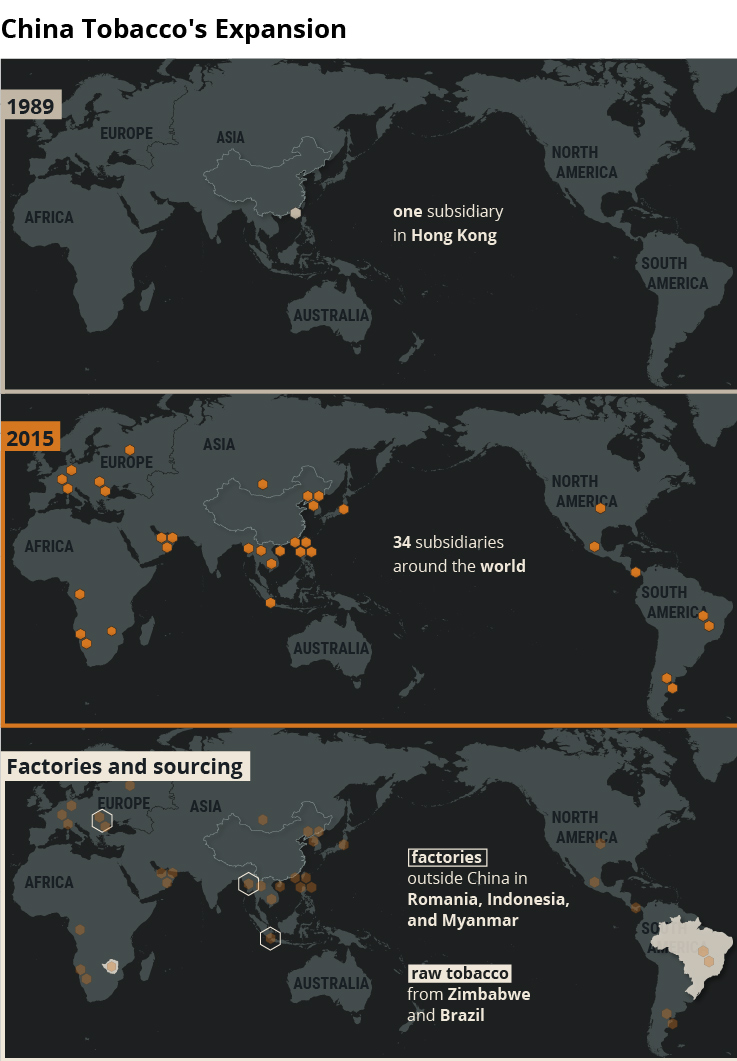 In a 2017 paper, researchers Jennifer Fang, Kelley Lee, and Nidhi Sejpal noted the quiet overseas expansion of CNTC and said if it continued on the same trajectory, there could be “profound impacts for public health.”

“The Chinese industry is advantaged by sheer size, weak domestic regulation, and government support for overseas expansion,” they wrote. “If successful, this will lead to increased global competition on price, new products, and intensified marketing, all resulting in increased tobacco consumption.”

How is China Tobacco linked to the Chinese government?

CNTC is regulated by the State Tobacco Monopoly Administration (STMA), the main governmental body that administers the country’s tobacco industry. It has been controlled by China’s Ministry of Industry and Information Technology since 2008.

Confusingly, although STMA technically oversees CNTC, they are effectively a single organization with the same leadership and structure. They even have the same website.

STMA, in conjunction with CNTC, determines the Chinese government’s overall policy on tobacco, including setting quotas on cigarette production and prices for cigarettes. CNTC then implements this policy.

In 2013, China embarked on an ambitious policy it dubbed the Belt and Road Initiative (BRI) to build infrastructure — and influence — around the world. As a state-owned enterprise, CNTC publicly announced that it would join the effort two years later.

The company’s director at the time, Ling Chengxing, said the BRI would accelerate CNTC’s global ambitions so it could “catch up with the top three tobacco multinational companies.”

“It is necessary to seize the opportunity of the country’s implementation of the ‘Belt and Road’ strategy, strengthen confidence, seize opportunities, select good projects, make every effort to accelerate the pace of the industry’s ‘going global’ development,” he said, according to industry publication TobaccoMarket.

In 2017, STMA issued a plan for how the Chinese tobacco industry would participate in the BRI to expand and diversify its market through the construction of new overseas facilities for China Tobacco’s supply chain.

How is China Tobacco structured?

CNTC is large and complex, with about 30 smaller Chinese tobacco companies under its umbrella. Some of them operate semi-autonomously, producing their own branded cigarettes and even participating in joint ventures abroad. So when you look at a pack of Chinese cigarettes, the name of the producer might be one of CNTC’s subsidiaries or even a joint venture.

For example, CNTC’s only European branch — a company in Romania playing a major part in its global expansion efforts — is actually controlled by one of its subsidiaries: China Tobacco Anhui Industrial Co, based in the eastern Chinese province of Anhui. The rest of its shares are split between two other CNTC subsidiaries, China Tobacco Shaanxi Industrial Co. and Hongta Tobacco Group Co Ltd.

In the late 1990s, a major reform consolidated what had been an even more sprawling Chinese tobacco industry, which had as many as 185 regional companies all under CNTC. “Being a state-owned bureaucracy directly impacts its structure,” Fang said of CNTC, “with operating offices at every level of government (municipal, provincial, national).”

How does China Tobacco differ from other multinational tobacco companies?

The main difference between China Tobacco and the other big players in the tobacco sector is that CNTC is fully state-owned. This isn’t an uncommon model in Asia — Thailand, South Korea, and Vietnam all had or have state tobacco monopolies — but CNTC dwarfs these ventures.

CNTC’s ties to the state create a significant conflict of interest, since the Chinese government both owns and regulates the company. As a signatory to the World Health Organization’s Framework Convention on Tobacco Control, China is supposed to set rules on limiting tobacco use, even as it reaps major financial benefits from its own cigarette monopoly.

Responsibility for implementing the Convention even lies with the same state body that runs CNTC, the State Tobacco Monopoly Administration.

“These dual responsibilities raise serious questions about the organization of tobacco control authorities and whether structural attributes impede their ability to protect consumers,” wrote a group of researchers in the journal Tobacco Control in 2012.

Because CNTC is not beholden to shareholders, it is not required to publicly disclose any corporate information — and it doesn’t, other than an occasional announcement of its immense annual profits. But in a major step two years ago, CNTC launched its first publicly traded subsidiary, China Tobacco International (CTI), on the Hong Kong stock exchange.

CTI Hong Kong describes itself as the “designated offshore platform” for China Tobacco’s international business expansion. It now handles CNTC’s tobacco leaf sales around the world as well as cigarette sales in certain Southeast Asian markets. It will also lead China Tobacco’s push to sell its own “heated tobacco products.”

How profitable is CNTC?

Nobody is sure quite how much CNTC makes. While it occasionally reports its annual profits, the data is government controlled and, unlike other Big Tobacco companies, not subject to independent auditing.

The most recent available financial information OCCRP could find was from 2019, when the China Tobacco Control Supervision announced that the total industrial and commercial profits of the tobacco industry in China amounted to 1.20 trillion yuan that year (over US$170 billion).

Where in the world are China Tobacco’s cigarettes sold?

According to the U.N.’s Comtrade database, China now exports tobacco products to 125 countries on five continents. 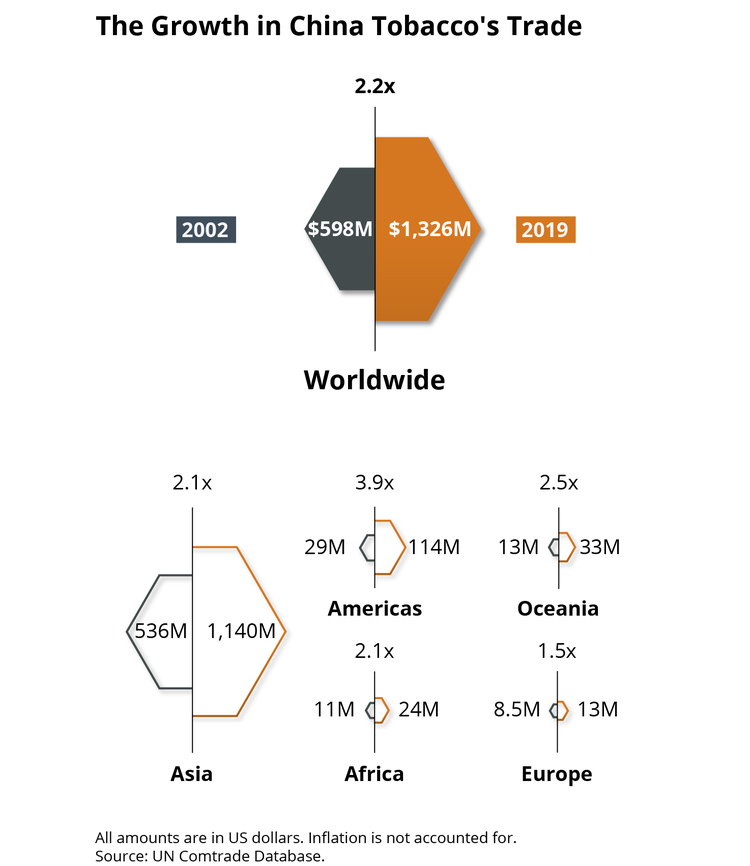 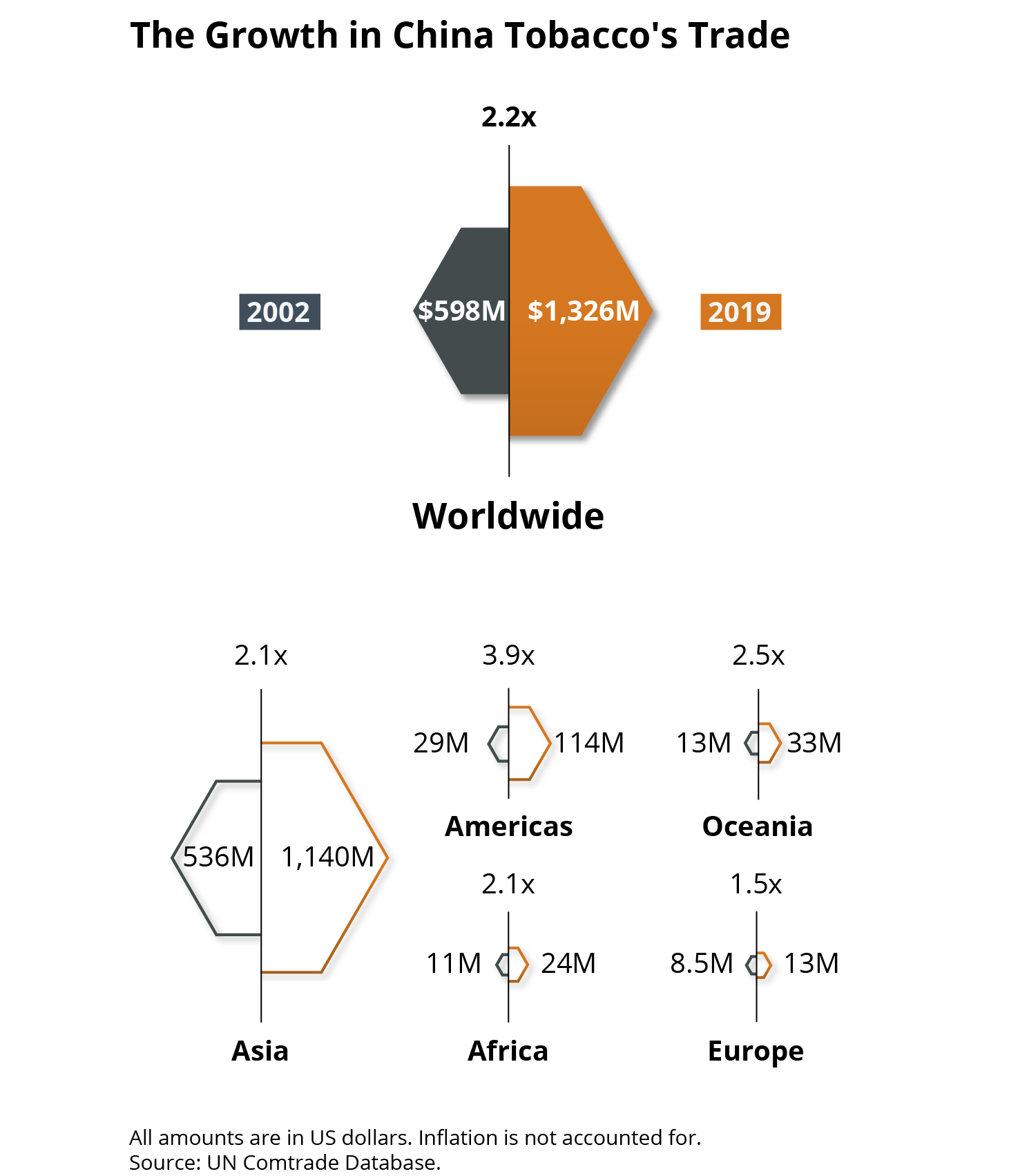 However, it’s unclear exactly where all these cigarettes end up. In Latin America, Europe, and Ukraine, OCCRP journalists found multiple instances of CNTC or its subsidiaries sending cigarettes to countries where there was no legal market for them.

Journalists also spoke to tobacco control experts in several countries who said they had never seen Chinese brands of cigarettes on the legal market, despite Comtrade records of exports. For example, China exported 6,246 tons of cigarettes to Canada worth $161.7 million between 2010 and 2019. But Robert Cunningham, a senior policy analyst with the Canadian Cancer Society, said he was only aware of these cigarettes being sold in one place, at the duty-free shop in Vancouver’s international airport. “Overall there are no Chinese cigarette brands known to be available for general sale in Canada,” he said.

Where China Tobacco brands are sold legally, it’s often in duty free shops, as in Vancouver. They’ve also been popping up for years on the black market in countries around the world, including Ukraine, Romania, Italy, Australia, Colombia, and the Philippines.

In 2005 China ratified the Framework Convention on Tobacco Control (FCTC), a legally binding international treaty negotiated through the World Health Organization and signed in 2003 with the goal of regulating tobacco consumption. Under the terms of FCTC, China must implement public health policies to reduce smoking without tobacco industry interference.

Among other measures, the FCTC calls for a ban on tobacco advertising and promotion, the addition of health warnings to tobacco packaging, and a hike in tobacco taxes. It also requires its tobacco-growing signatories to reduce farmers’ dependence on the crop.

On January 10, 2013, China also signed the Protocol to Eliminate Illicit Trade in Tobacco Products, which aims to stop cigarettes from being illegally produced or smuggled. Parties to the protocol are supposed to conduct due diligence on companies buying cigarettes — including checking to make sure they are licensed and will be selling tobacco legally — and to only export to markets where there is legitimate legal consumer demand for their products. OCCRP has found evidence that CNTC did not adhere to the protocol in two of the regions we focused on, Europe and Latin America.

I hear a lot about “Big Tobacco” companies and the tactics they use to sell cigarettes, but almost nothing about China Tobacco. Why is that?

The other big transnational tobacco companies (TTCs) — Philip Morris International, British American Tobacco, Japan Tobacco International, and Imperial Brands, which are collectively known as “Big Tobacco” — work in countries and regions like the U.S. and Europe that have more strongly regulated tobacco markets. But there is sparse available information on China Tobacco since its primary operations have been in China.

“It’s all behind closed doors,” said Judith Mackay, a special adviser to the Global Center for Good Governance in Tobacco Control with years of experience dealing with the tobacco industry in Asia. “There’s no transparency. There’s no sort of stakeholders meetings, there’s no announcement…. We just don’t know.”

Luk Joossens, a tobacco control expert who focuses on the illegal trade, said experts still lack good data on how much tobacco CNTC exports, so the company is seen as making “cigarettes produced by the Chinese for the Chinese.”

“China should have the same attention as is given for the other Big Four,” he said, “but most of China’s market is national and this may be the reason.”

But this may be changing as China Tobacco “goes global.” It has also partnered with other big tobacco companies in recent years, announcing in 2005 that they would be setting up China Tobacco Philip Morris International in Switzerland to sell three of its brands abroad through PMI’s distribution networks. Newer partnerships with British American Tobacco and Japan Tobacco International have seen brands like Double Happiness, Golden Deer, and Red Double Happiness launched outside China.

“As CNTC increasingly mimics the globalization strategies of TTCs,” wrote Fang, Lee, and Sejpal, “there is a need to now include China, along with other emerging TTCs, into global tobacco control efforts.”

Contract Tobacco Farmers in Zimbabwe Say They Are ‘Drowning in Debt’
Illicit Chinese Cigarettes, an Italian Warehouse, and a Mysterious Libyan “Friend”
Huge Quantities of Chinese Cigarettes Smuggled Into Ukraine
China’s State Tobacco Company is Massive at Home. Now it’s Ready to Take Over the World