Montenegro and Ukraine have spent over a year disputing who is responsible for the mountains of contaminated soil and grit dumped in the Black Sea port of Kherson by a French engineering firm.

Ukrainian police are investigating whether thousands of tons of hazardous waste, which have been stranded in a Black Sea port for more than a year, were fraudulently imported by the local partner of a French engineering firm.

The waste was shipped to Ukraine from the site of a World Bank-backed project to rejuvenate the decommissioned shipyard of Bijela, on Montenegro’s Adriatic coast, where contaminated soil and grit left over from sandblasting the hulls of ocean-going ships accumulated over the years.

Journalists have uncovered evidence suggesting that the subsidiary of a French engineering company contracted to dispose of the waste from Bijela, submitted incorrect samples to Montenegrin authorities. This appears to have allowed the French company, Valgo SA, to circumvent Montenegrin and international regulations governing the transport of hazardous materials.

Ukrainian police are also investigating whether Valgo’s Ukrainian partner, Firma Arka, submitted fraudulent paperwork to authorities in that country for the shipment.

The piles of toxic waste now sitting in the port of Kherson have presented a big problem in Ukraine. 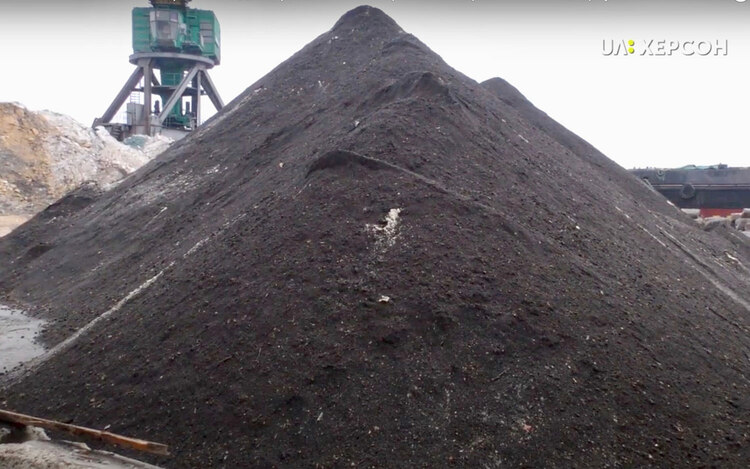 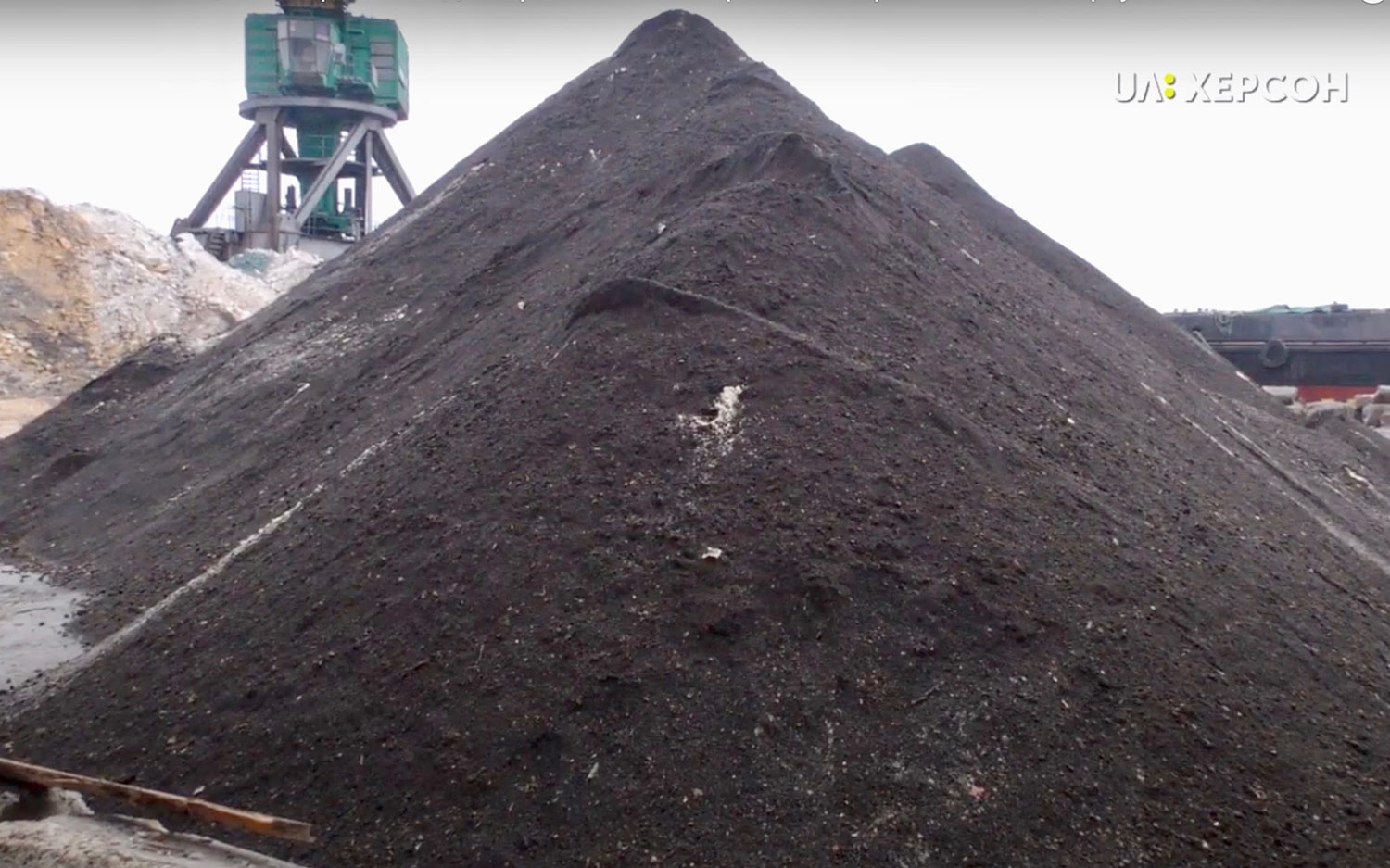 Credit: UA: Kherson TV Piles of waste at the port in Kherson.

“We have absolutely no way to treat this grit here,” said Volodymyr Mykolaenko, who until November was the mayor of Kherson.

I cannot even imagine how you can treat these 3,600 or 3,800 tons. Where do you take it? Where do you treat it? Who will pay for this?
– Volodymyr Mykolaenko, former mayor of Kherson

Today, authorities in Montenegro and Ukraine are still disputing who bears responsibility for the mountains of black grit sitting in Kherson’s port. Lab tests provided to OCCRP by Ukraine’s Ecology Ministry show the waste contains high levels of chemicals that can cause cancer and birth defects.

The World Bank Group said it had commissioned an internal investigation into allegations that hazardous waste from the Bijela site had been moved to Kherson in 2019, but it “could not corroborate allegations” that the waste originated there.

“No waste from the Industrial Waste Management and Clean-up Project (IWMP) was illegally shipped to Ukraine,” a spokesperson said by email.

However, the World Bank Group declined to respond to specific questions about evidence collected by OCCRP and its Montenegrin member center, MANS, that at least some of the waste that ended up in Ukraine appears to have originated from its project site in Bijela. 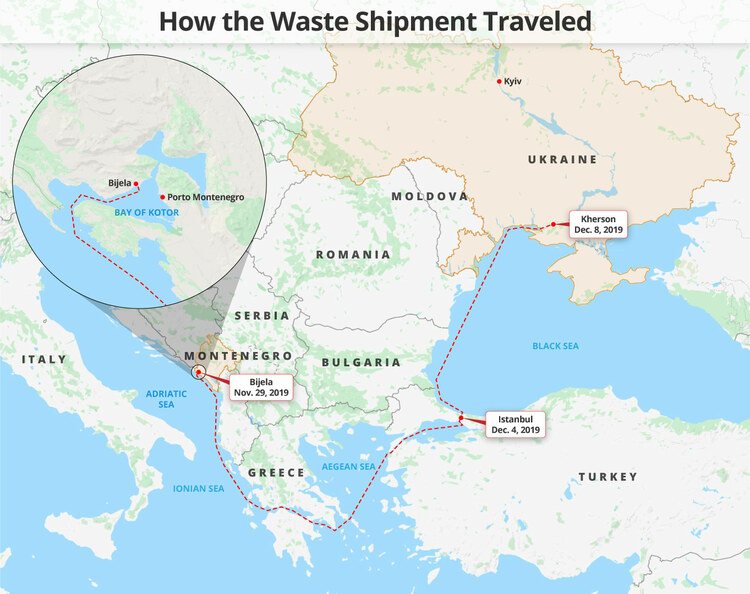 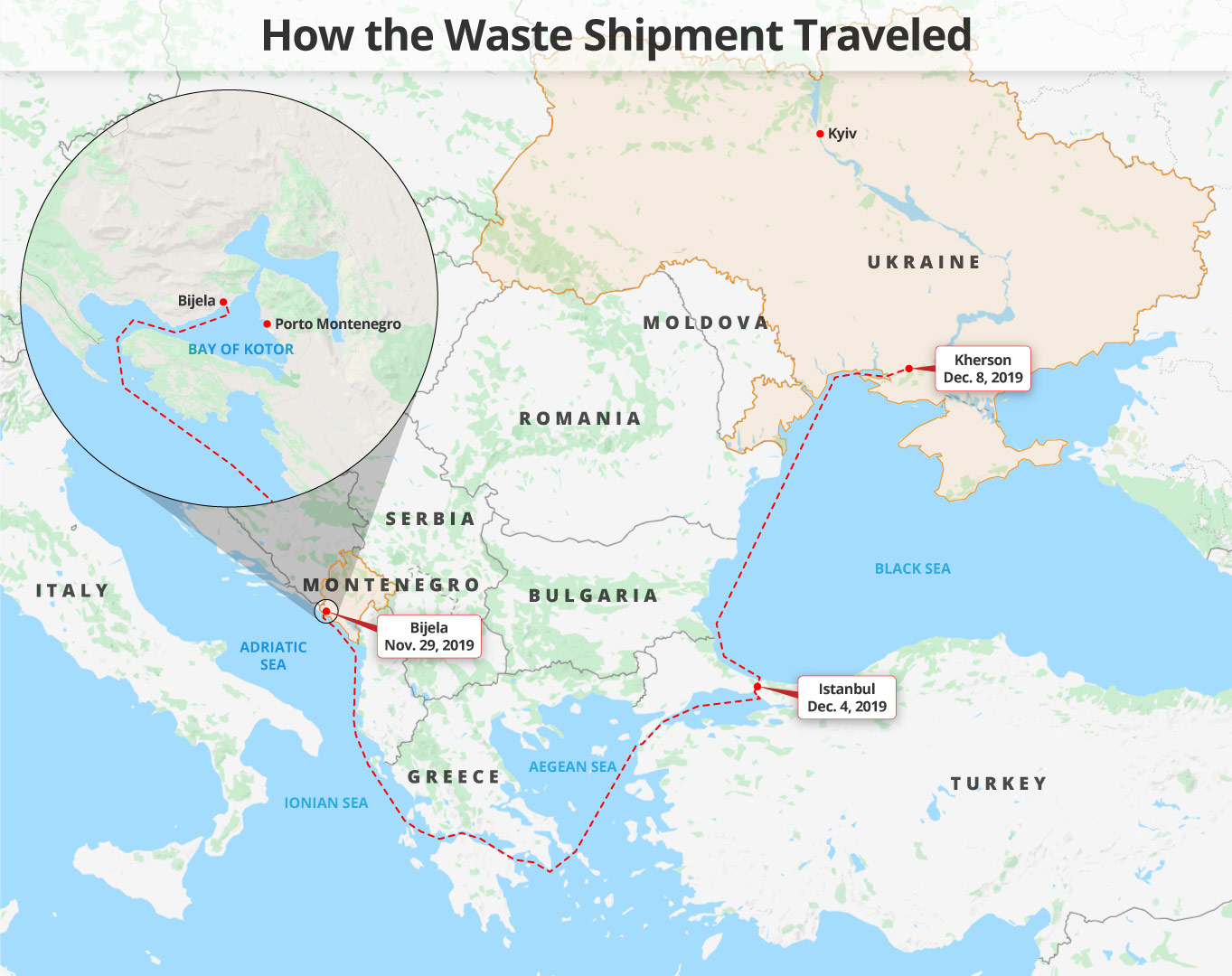 Credit: Edin Pasovic The FL Lidya left Bijela with a load of waste material in November 2019, arriving in Kherson the following month.

Montenegro’s Environmental Protection Agency (EPA) cleared the shipment of thousands of tons of waste for export to Ukraine in 2019 after a sample submitted by Valgo showed it did not contain any dangerous substances, which would require a special license to export.

The Center for Ecotoxicological Research (CETI) in the Montenegrin capital of Podgorica, which tested the sample for toxicity, told MANS it seemed to have come from a luxury marina development in Porto Montenegro. Valgo has a separate agreement to remove waste from that site. 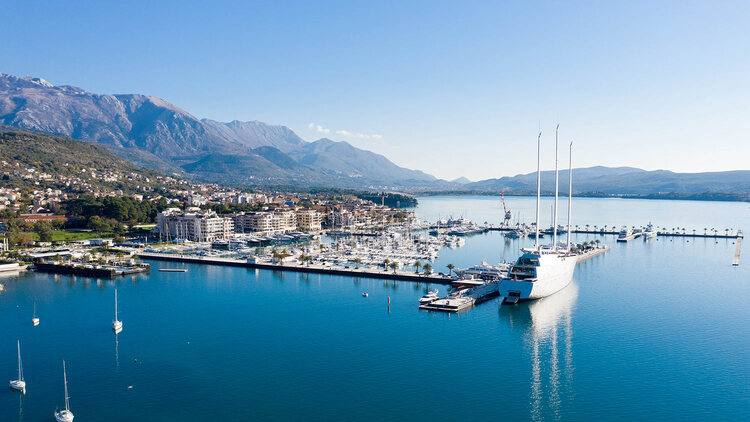 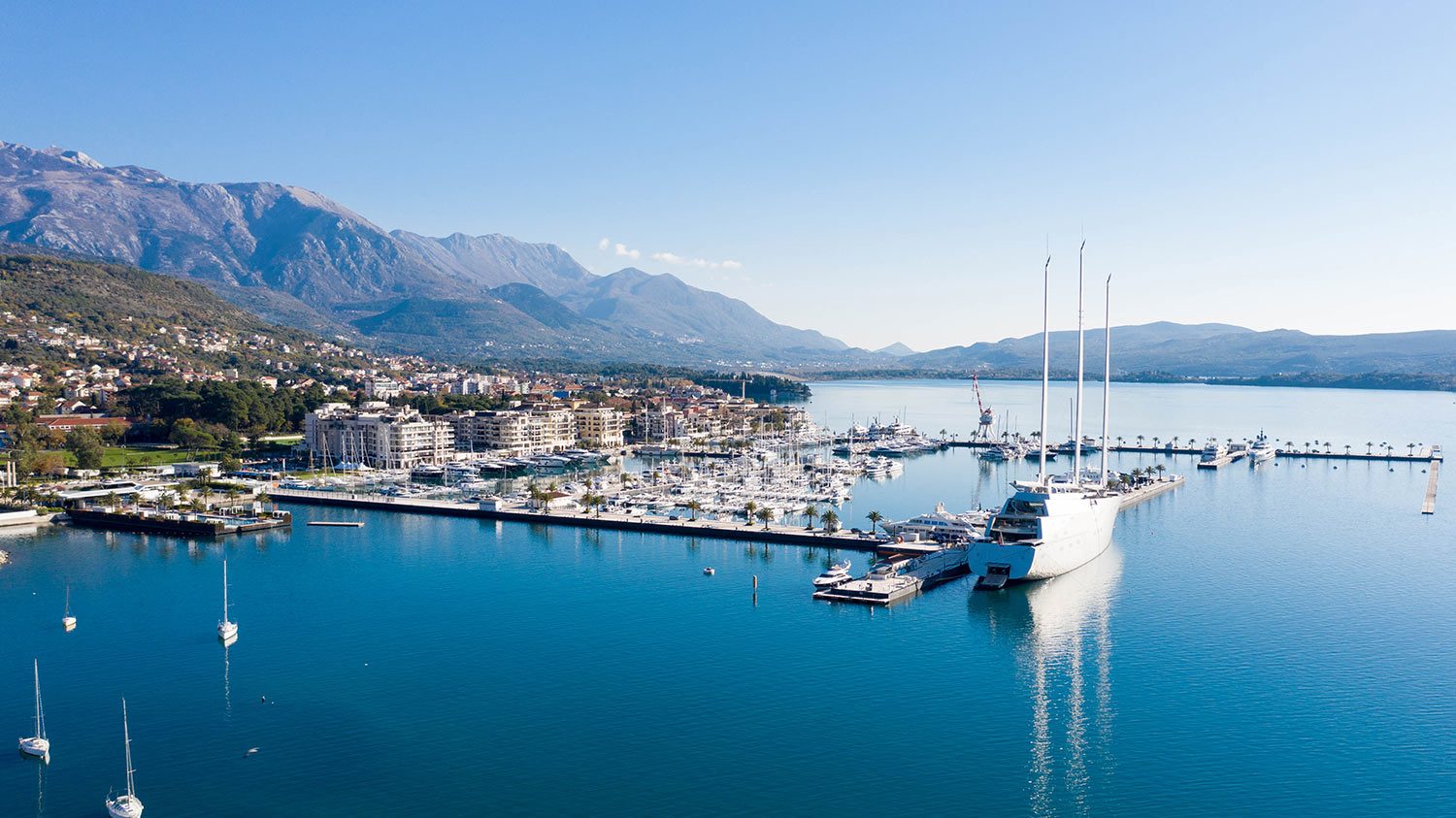 Porto Montenegro confirmed that some of its waste material was included in the shipment to Ukraine.

“The material was temporarily stored there on a completely separate and covered plot, until the moment of transport by Valgo by sea, together with other waste from the Bijela Shipyard, to the appropriate final destination, the licensed landfill,” said Porto Montenegro spokesperson Danilo Kalezić.

Ukrainian scientists also found the material contained hazardous substances present in soil from the World Bank-backed project site, including “excess levels of heavy metals, leading to suppression and death of living organisms and having explicit cancerogenous and mutagenic effects.” 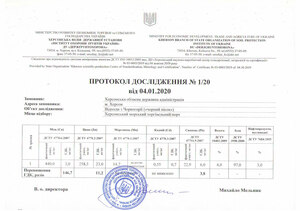 Results of tests by Ukrainian scientists of the material stranded in Kherson.

OCCRP provided those test results to CETI, which found that the Ukrainians had discovered pollutants including petroleum hydrocarbons, known as TPH. CETI noted that soil samples it tested from Bijela in 2015 and 2016 also showed “high TPH content” –– which was not the case in samples from Porto Montenegro.

The World Bank Group said it looked into allegations that hazardous waste was shipped from its Bijela project site to Kherson after learning of them in December 2019, initiating an inquiry by its independent integrity department.

The department “concluded it could not corroborate the allegations that the hazardous waste originated from the site covered by the Bank-funded contract,” a spokesperson said. 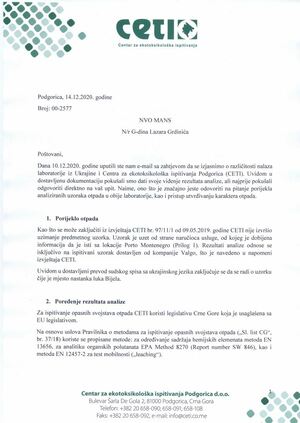 The Center for Ecotoxicological Research in Montenegro analyzed the Ukrainian results and concluded that the waste contained pollutants consistent with samples from Bijela.

Ukrainian police, however, think it may have. They sent a notice to Valgo’s partner, Firma Arka, in May 2020 naming its executive director, Zhovtyak, as a suspect after the Ecology Ministry and Kherson’s mayor both complained they had not issued permits for the waste.

Police allege the Ukrainian company faked documents — including forging then-Mayor Mykolaenko’s signature — and an environmental ministry permit for the waste after the ministry twice refused to greenlight the shipment.

Mykolaenko said he only found out about the shipment of waste when it had already arrived.

“I came to the port when the grit was already unloaded and was at the pier,” he said. “I immediately banned moving it out of the port, as I didn’t sign any guarantee letter as they claimed.”

Zhovtyak, Arka’s executive director, denied allegations that he knowingly used forged documents to illegally import hazardous waste. He also questioned the accuracy of the tests showing the grit is toxic, although he provided no evidence that they were flawed.

Zhovtyak said the controversy was stirred up by local members of parliament who disagreed with the mayor’s decision to allow the shipment — which he described as “garbage” — to be imported. He said they then began filing complaints to different agencies about the situation.

“And the local ‘media for hire’ blew it out of proportion and started writing about radioactive, toxic sand,” he added.

“So, naturally the mayor denied issuing the permit.”

In response to the claims of forgery, he said he had delegated the task of obtaining paperwork from the mayor to a subcontractor, and had not seen his letter of approval personally.

Zhovtyak said that the ecology ministry’s claim of forged documents was likewise caused by the public stir.

“When [the ministry] heard about radioactive sand, they said, ‘We know nothing, we didn’t issue anything,’” he said.

The Basel Convention, which governs the movement of hazardous material across borders, mandates that dangerous waste substances be disposed of in an “environmentally sound” manner. Companies like Valgo are sometimes contracted to move hazardous waste from countries that do not have the capacity to treat it, to countries that do.

In the case of Montenegro, Valgo agreed to export the waste from the Bijela project to countries with facilities to process the grit, noting on its website that “blasting sand cannot be treated in the Balkans.”

If the waste really was non-hazardous, as Firma Arka claims, it is unclear why it would need to be exported for processing, since it could be disposed of in Montenegro.

It’s also unclear why Valgo would want to ship waste to Kherson, a regional capital with a population of around 287,000. Like Montenegro, Kherson does not have specialized facilities to dispose of hazardous material.

Valgo was exporting the waste from Bijela to Spain until 2019, when the country stopped accepting shipments.

Valgo did not respond to questions from reporters. 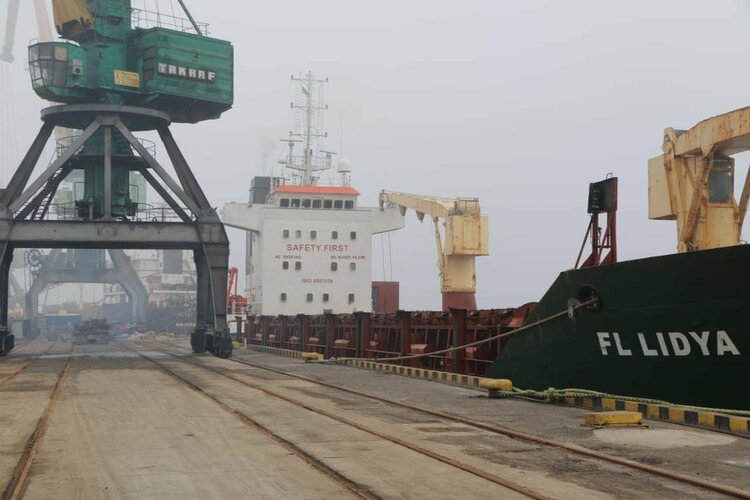 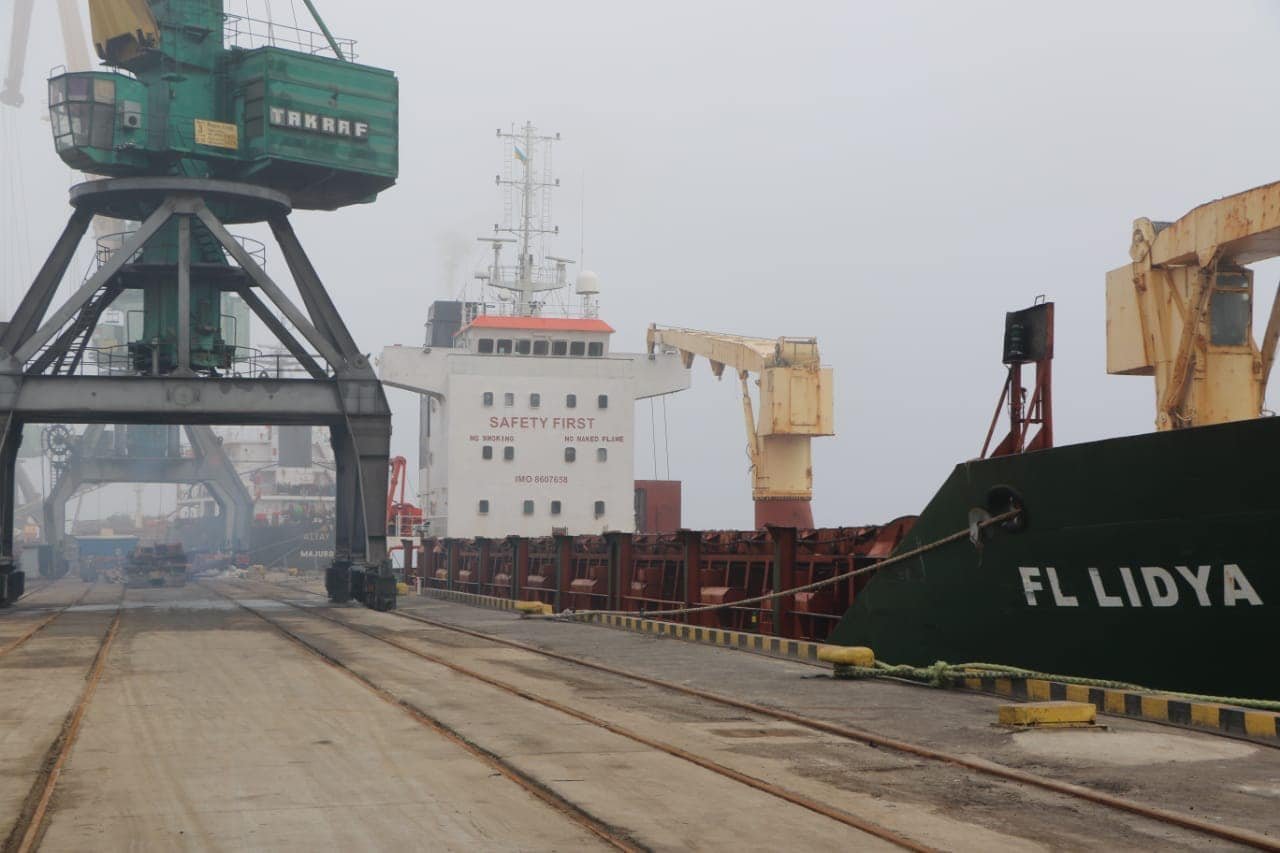 Credit: Max Nefyodov/Facebook The FL Lidya at the port in Kherson, after transporting waste from Bijela.

As Ukrainian police probe Arka, the most pressing question for Kherson’s residents is what to do with the massive piles of waste that still sit in the port.

Discussions between the two sides on who is responsible for dealing with it have been ongoing for more than a year. Ukraine says the Basel Convention requires Montenegro to repatriate the hazardous material, but Montenegrin officials say they are not sure.

“At the moment, we continue consultation with the Basel Convention contact agencies in Montenegro about the return of the waste cargo to the Republic of Montenegro,” Ruslan Strilets, a deputy minister of ecology, told OCCRP.

A spokesperson for Montenegro’s sustainable development ministry said its liaison for the convention was briefed on the issue at the beginning of 2020. The ministry will follow Basel rules, he said, but it is not yet clear which country is responsible for the waste.

Montenegro’s EPA, which is overseeing the Bijela clean-up project, said it was awaiting the outcome of the Ukraine investigation before deciding whether or not Montenegro should repatriate the shipment.

But the agency noted that the police investigation — and any ensuing court case in Ukraine — could stall or halt the Bijela clean-up project, which was initially meant to be completed by July 2020.

“If Valgo SA’s liability is determined in the dispute, it may not only carry a certain reputation risk for the company, but also have a negative impact on the implementation of the Industrial Waste Management and Cleaning Project in Montenegro,” the EPA said.