Despite Ukraine’s deserved reputation for long and bitter winters, there are few places more lucrative to build a solar power plant.

The country is now undergoing a boom in green energy investment, pushed by big government incentives that will become less lucrative for plants that start service after Jan. 1, 2020.

Investors have scrambled to beat the deadline: Already this year, 62 new solar and wind plants, with a capacity of nearly 800 megawatts, have opened — more than in all of 2018. At least 700 more megawatts of renewable energy, most from solar and wind, are scheduled to come online before the end of the year, when the reduction in incentives kicks in.

That sounds good for the environment, but an analysis by OCCRP partner Bihus.info has found that Ukraine’s green energy boom disproportionately benefits powerful, politically connected businessmen. Among these are the country’s richest man, Rinat Akhmetov, Interior Minister Arsen Avakov, and a parliamentary ally of President Petro Poroshenko. Moreover, growing government support for green energy production may put pressure on the state energy provider to pass costs on to consumers who can ill afford them.

(Click here for a video version of this report in Ukrainian)

Good intentions may have been at the heart of the problem. Ukraine has set an aggressive goal of growing renewables from the current eight percent of the electrical market to 11 percent next year, and up to 25 percent by 2035.

To help meet that timetable, the government pays private producers generously for solar and wind power through “feed-in tariffs” that are as much as double the rates paid in nearby European Union countries.

The Ministry of Fuel and Energy estimates the surge in new plants will cause the total cost of these payments to balloon from the more than US$600 million paid in 2018 to roughly $1.5 billion by 2021.

Critics warn that this may hurt Ukraine’s green energy industry in the long run.

Viktoriya Voitsytska, a member of the Ukrainian parliament’s energy committee who has proposed major rate cuts, argues that keeping the high rates locked in for another decade for plants opening this year could cause Ukraine’s energy market to collapse.

“Then we would have to forget about renewable energy for a long time here,” she told Bihus.info in early April.

Ukraine has promoted green energy use for more than a decade — and from the beginning, the industry has been a boon for producers with political connections.

Private producers sell electricity to Energorynok, a state monopoly market, which sells it on to utilities that supply consumers. To encourage the sector to grow, the parliament set the high rates paid by Energorynok and locked them in until 2030.

Among those early lucky adopters were Serhiy and Andriy Klyuyev, businessmen linked to former President Viktor Yanukovych. Active Solar Company, which journalists have linked to the brothers, set up the country’s largest network of solar plants, generating a total of nearly 550 megawatts. However, they handed most of their plants to a creditor, China National Building Material, after fleeing the country in the wake of the 2014 revolution.

Another big beneficiary was Rinat Akhmetov, Ukraine’s richest man and a Yanukovych backer before the former president was overthrown in 2014. In the early years of the special tariff, Akhmetov built the country’s largest wind farm, the 200-megawatt Botiyevska station.

Stations built by the Klyuyev brothers and Akhmetov’s businesses received 35 percent of all Energorynok payments to alternative energy producers in 2018.

Legislation passed in 2015 included a schedule of annual or biennial rate reductions, but the tariffs are still generous in light of technological advances that have rapidly driven down the cost of production and storage, especially for solar power.

“The swift development of solar technology has cut the price of production equipment in half,” Ihor Tynnyi, a Ukrainian businessman with interests in hydroelectric, bioelectric, and solar energy, told Bihus.info in February.

Yet the solar tariff still exceeds the market price by at least 30 percent, while wind energy is roughly 10 to 15 percent above market, Andriy Herus, the head of the Ukrainian Association of Energy Consumers, said in February.

In Germany, the rate paid to new solar energy plants is less than half of the current Ukrainian rate. In Portugal and Hungary, solar rates are less than two-thirds of their Ukrainian equivalent.

Concerned by the imbalance, some Ukrainian legislators have tried without success to cut tariffs for certain types of renewable energy, such as solar and wind.

Voitsytska proposed a 30 percent cut in solar power tariffs, and a 10 percent cut for wind power plants coming online in 2019. Under current law, those plants will qualify for the higher rates through 2029, while plants built after January 1, 2020, will see lower rates.

In late February, a parliamentary committee soundly rejected the proposal, with only Voitsytska voting in favor.

“Green energy is not only a tariff; it is also an investment climate; the rules of the game,” said Oleksandr Dombrovsky, the head of the committee, in an interview with Bihus.info after the vote. “The rules of the game cannot be changed from today to tomorrow.”

Credit: Rustam Rashydov, Bihus.info A 25 megawatt solar plant in Pidstepne Sontse, southern Ukraine, being built by the Kherson Company. Inna Avakov, the wife of Minister of Internal Affairs Arsen Avakov, and MP Ihor Kotvitskyi are partners in the project.

At the end of 2018, Ukrainian producers generated 2,100 megawatts of renewable energy. By the end of this year, that figure is expected to jump to 3,600 megawatts.

Bihus.info has analyzed the companies that have built, or plan to build, plants in 2019. It found that among the rush of companies — many of them new players — are firms owned by politicians and businessmen aligned with outgoing President Petro Poroshenko and Interior Minister Arsen Avakov.

Among the Poroshenko allies moving into the sector is Makar Paseniuk, a personal financial adviser to the president, who made his fortune in confectionary. Investment Capital Ukraine (ICU), which is run and partly owned by Paseniuk, officially opened one solar plant earlier this year, and is scheduled to open another soon. The plants, which produce a combined 99 megawatts, will be complemented by a future 127 megawatt plant.

In response to questions from Bihus.info, ICU’s press office forwarded a written response from Pasenyuk which noted that the company undertakes all its solar investments in a 50/50 partnership with VR Capital Group, an American investment fund. Pasenyuk also denied any connection with Poroshenko, saying that the owners of ICU and VR Capital are the ultimate beneficiaries of the projects.

Even more involved in the sector is the family of Avakov, the interior minister, and his fellow the People’s Front Party. The party is formally allied with Poroshenko’s parliamentary bloc, though the men are often at odds politically. 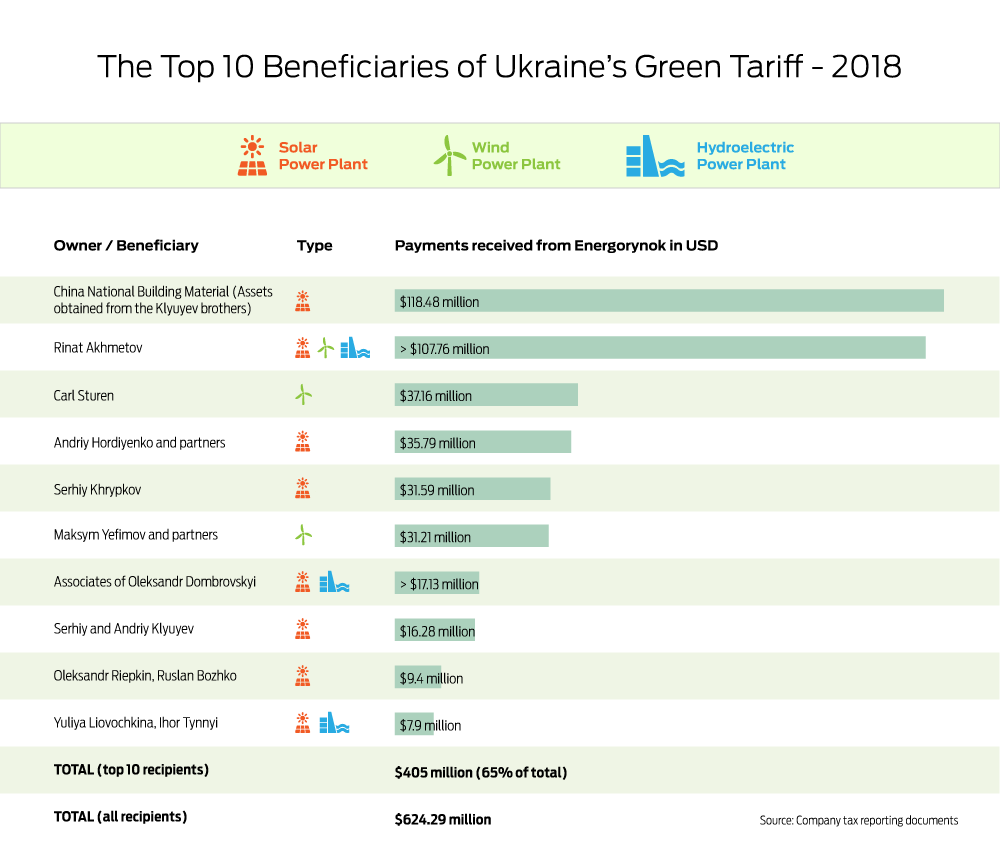 In an interview with Bihus.info at the end of February, Kotvitskyi declined to answer questions about renewable energy tariff legislation.

“I don’t run the business, I have just allocated the money as an investment,” he said. “Experts have said that investments made in this market in the near future will pay off.”

In written responses sent to Bihus.info, Avakov acknowledged that his wife is “the founder and shareholder” of the company that operates Pidstepne Sontse, but said he is “neither an owner nor an employee nor a beneficiary of this company.”

“I think that the Ukrainian green tariff should be lowered to the average European level,” Avakov said, although he didn’t specify when he thought this reduction of fees should occur. 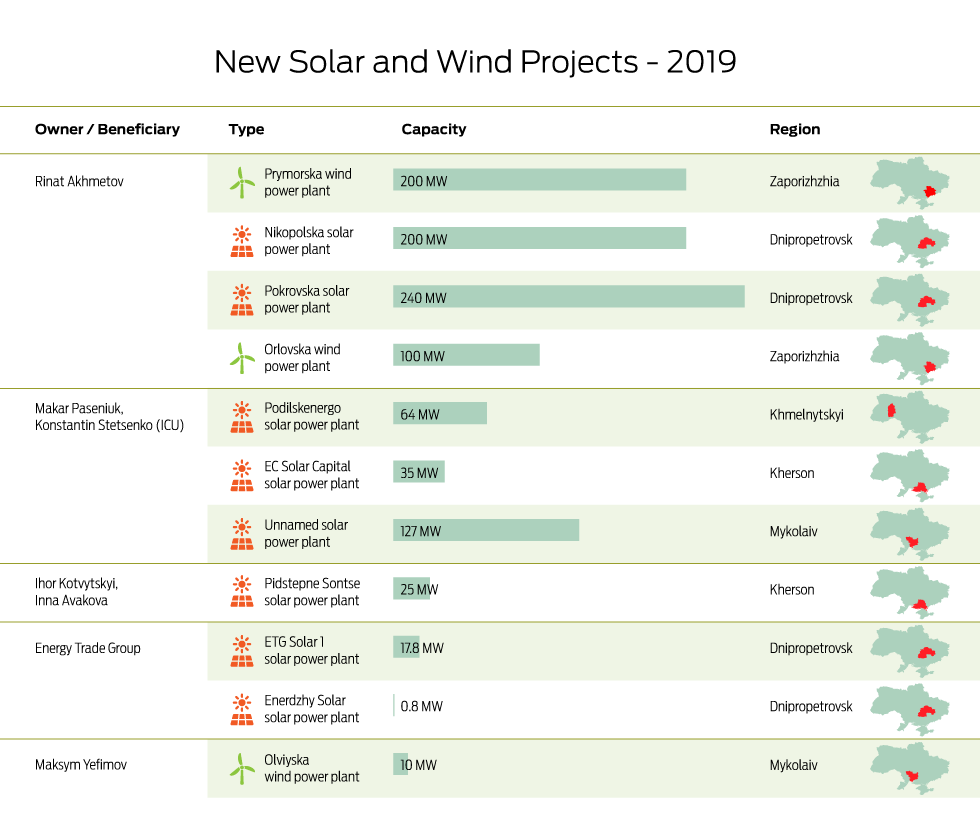 But by far the biggest beneficiary of Ukraine’s green tariffs is still Rinat Akhmetov. His DTEK holding company plans to increase renewable energy generation from 210 megawatts at the beginning of this year to as many as 1,000 megawatts by year’s end. In March, the company launched its 200 megawatt Nikopolska solar plant, the country’s largest, and dedicated its Prymorska wind plant (which generates 100 megawatts in its first phase) in a ceremony attended by Poroshenko.

“The unconditional leader of this process is the oligarch Rinat Akhmetov,’’ Herus told Bihus.info in February. “His DTEK companies are the chief lobbyists trying to make the tariffs for green energy remain in place for as long as possible.”

The lawmakers working against tariff reduction include Artur Martovitsky, an opposition MP and former head of several DTEK mining concerns, who has proposed easing the cuts that are set to start in 2020.

“I have worked at DTEK holding. However, this does not have anything to do with my current parliamentary activities,’’ Martovitsky told Bihus.info in early April.

In a written response to questions from journalists, DTEK’s press office said that the company supports the need to reduce the potential financial burden on consumers, but is opposed to any retroactive tariff reductions, which would lead to “a deterioration of the country’s investment climate.” The statement also notes that the company represents “less than 15 percent” of Ukraine’s green energy market.

Hidden assets, money laundering, tax dodging, and the firms that help make it all possible. Here’s how formation agents can facilitate abuse of the global financial system.