Sometimes Fatima wakes at night to a deep roaring that shakes her home to its foundations. The air is so thick with the smell of sulfur and gas that it’s hard to breathe, and outside the sky glows like a nightmarish dawn breaking over her village near Azerbaijan’s Caspian coast.

“Many times everyone ran out into the street because of the roar,” Fatima told Crude Accountability, an environmental and human rights nonprofit that worked with OCCRP on this story.

“The sound was like an explosion. The house trembled like there was a powerful earthquake,” she said. “It’s a nightmare if you wake up at night — you will not be able to go back to sleep. Everyone’s nerves are damaged.”

The flares that invade Fatima’s dreams come from gas being burnt off at the nearby Sangachal terminal, operated by U.K. oil giant BP. For more than 15 years, the terminal has received gas from the vast undersea Shah Deniz field to supply Azerbaijan, Georgia, and Turkey.

But satellite data shows that flaring increased significantly after 2018, when production from Shah Deniz began to ramp up. Late in 2020 the Sangachal terminal started commercial deliveries through the Southern Gas Corridor, a massive set of interconnected pipelines that is now pumping billions of cubic meters of gas a year to the European Union.

Credit: Umid Gasabasi A video posted on Facebook in March 2020 shows the flaring from the Sangachal terminal. 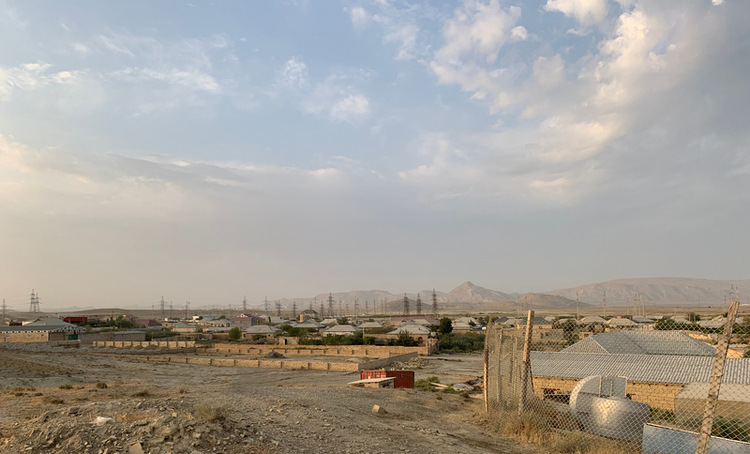 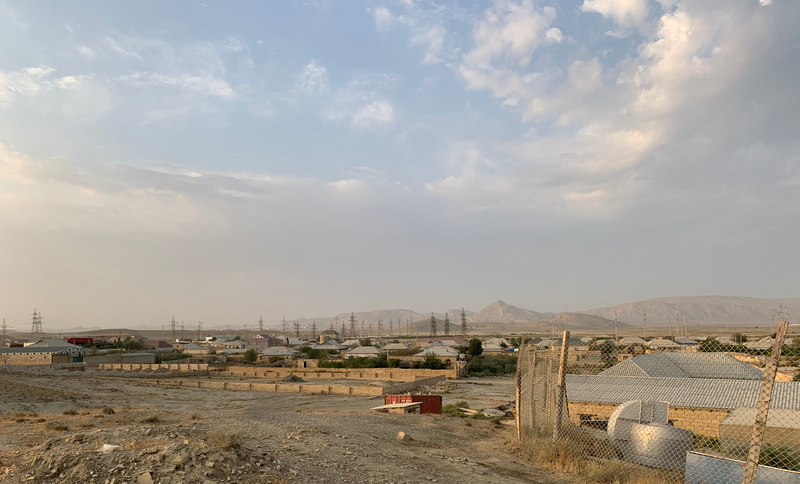 Credit: Crude Accountability The village of Sangachal (foreground) sits just a few kilometers from BP’s terminal (visible in the background) 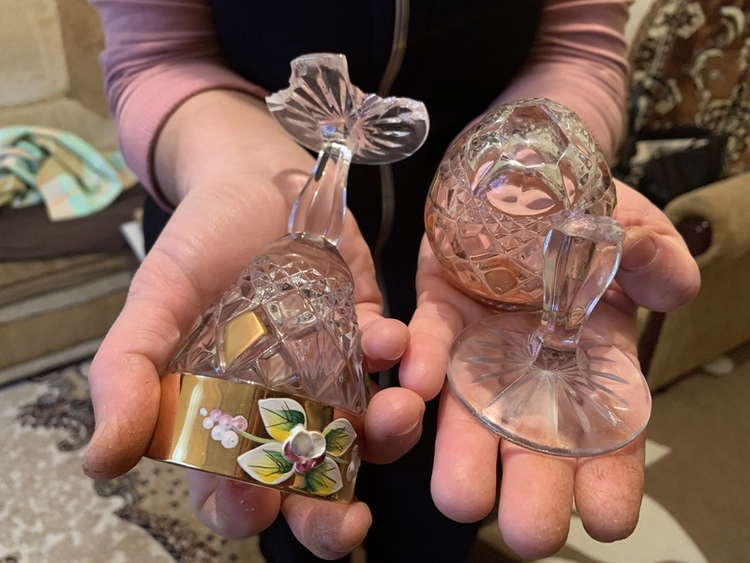 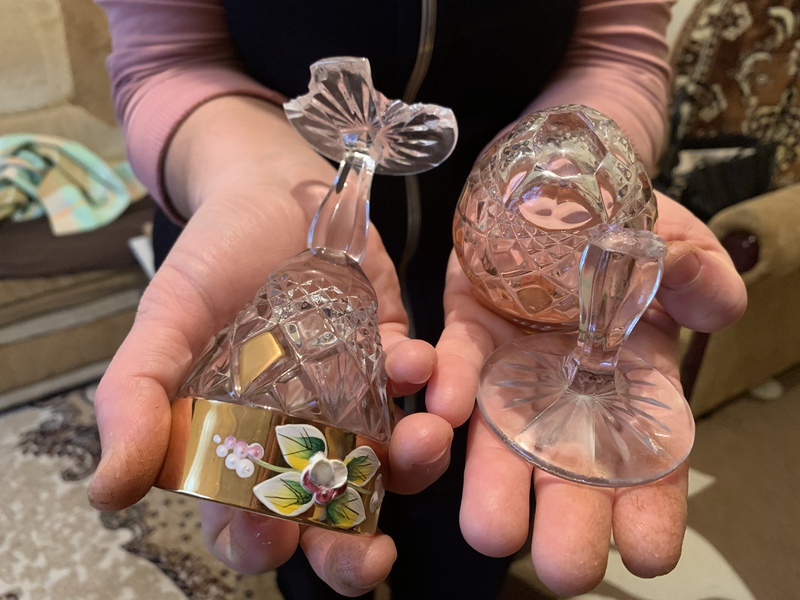 Oil and gas are Azerbaijan’s main source of income, making up around 60 percent of the state budget, according to the latest report by the International Energy Agency. Little of this money has trickled down to ordinary citizens, however, much of it frittered away on state-backed vanity projects or gone to line the pockets of corrupt officials.

People who live near Sangachal say they have paid the price, complaining of health issues they blame on air pollution from the terminal. Several of the nine villagers who spoke to Crude Accountability in 2021 — all of whose names have been changed for their protection — said they or members of their family have developed heart and breathing problems, conditions associated with living near flaring.

Fatima said her once-robust husband had to have two heart surgeries in 12 months. Her five-year-old son is underweight and the doctors say he is not growing. “How can children grow surrounded by such poison?” she said.

Zahra said she was diagnosed with cancer, thyroid problems and diabetes in 2020, while her children suffer from anemia, epilepsy, and breathing problems.

“Early in the morning when we breathe, it feels like we breathe in poison,” she said. “Yesterday, my child said to me, ‘Mom I’m choking.’” 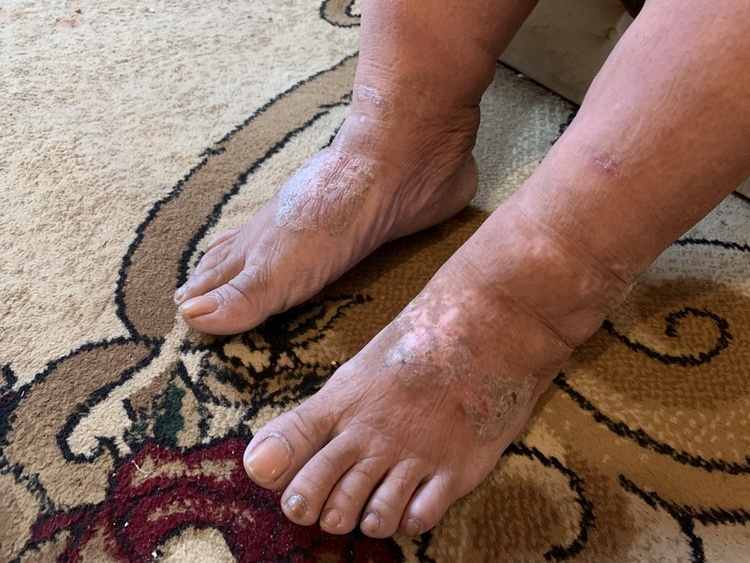 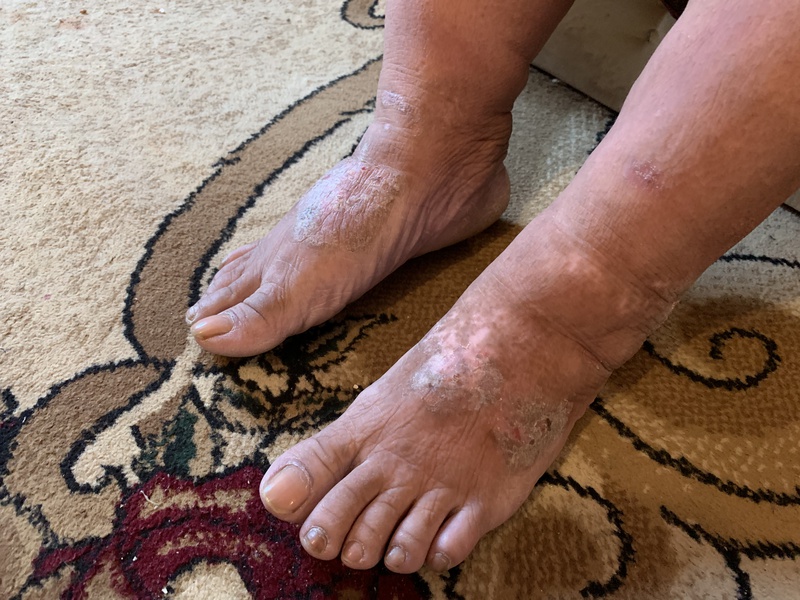 Credit: Crude Accountability Villagers who live near the Sangachal terminal say they have developed a raft of health conditions, from breathing and heart problems to rashes on their skin. 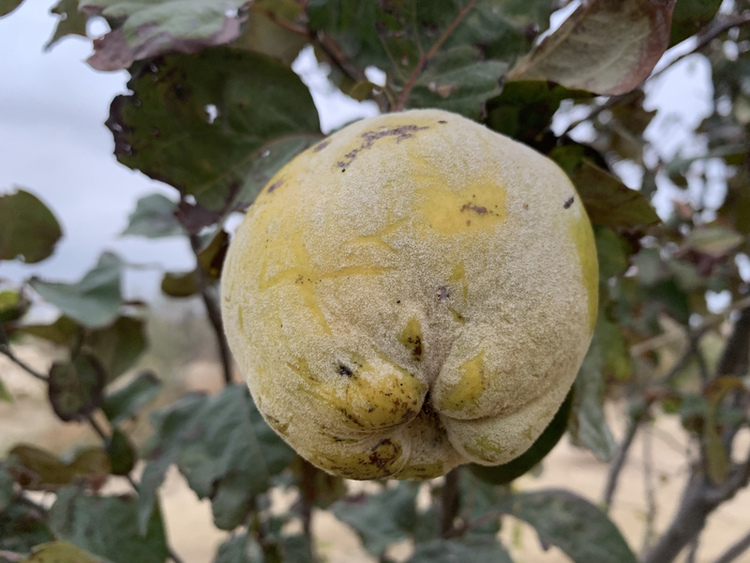 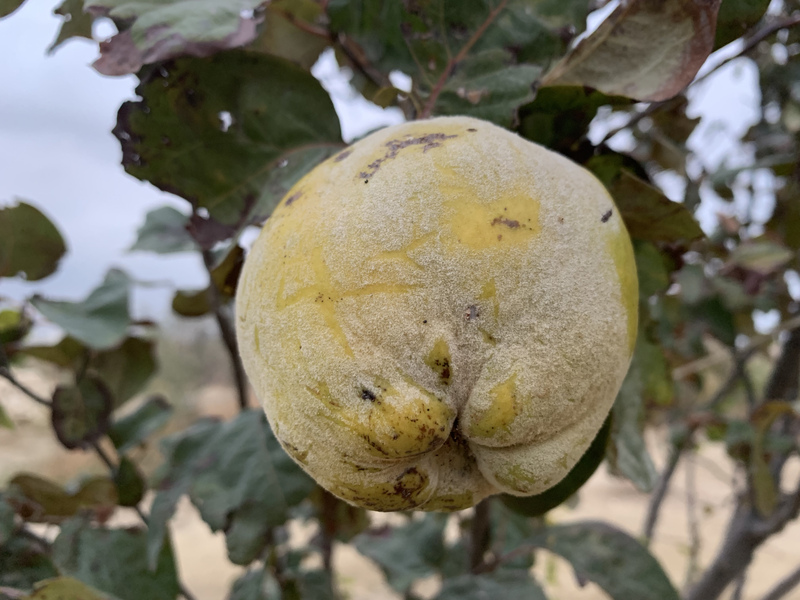 Credit: Crude Accountability Some blame the terminal, which has been operating for more than 15 years, for poisoning their plants and animals.

Lara Cushing, an assistant professor in environmental health sciences at the University of California, Los Angeles, has studied the impacts of flaring from oil and gas developments on communities in Texas. She found evidence that living near flaring is associated with significantly higher rates of preterm births. Air pollutants released from flares have been linked to immediate health issues, such as asthma attacks, as well as longer-term effects such as heart conditions.

“The amount of air pollution that you breathe in over your lifetime influences things like inflammation, oxidative stress in your body,” Cushing said. “It can lead to cardiovascular disease [and a] shortened lifespan.”

It’s difficult to pinpoint why flaring at the Sangachal terminal has increased, though it happened around the time when deliveries of gas from Shah Deniz ramped up. It’s also unclear exactly what pollution the flaring has caused.

Air samples taken by Crude Accountability in a nearby village in 2019 showed elevated levels of sulphur dioxide — a gas associated with flaring that can damage people’s health in high concentrations — but OCCRP was unable to establish for certain if it was produced by the terminal, a nearby electrical plant, or another source.

A report by BP Azerbaijan said it monitors the air for nitrogen oxides, sulphur dioxide, and particle pollution, and that between 1995 and 2017 it found “no evidence to indicate that operations at the terminal were having a negative effect on the surrounding air quality.”

A BP spokesman said the company had carried out regular air monitoring around the Sangachal terminal between 2018 and 2021, and had identified no emissions that exceeded air quality limits. “Our policy is to comply with applicable environmental laws and respect the rights of people in communities who are potentially affected by our activities,” he said in a statement.

“bp has a long-standing and extensive community engagement program and an established grievance procedure which enables community concerns to be raised. No environmental-related grievances were recorded from the identified communities over 2018-2021.”

SOCAR said it “strives for the highest ecological standards” and is close to its goal for zero emissions from its oil and gas production fields. However, it said it does not operate the Sangachal terminal, so any associated environmental issues are the responsibility of state authorities. 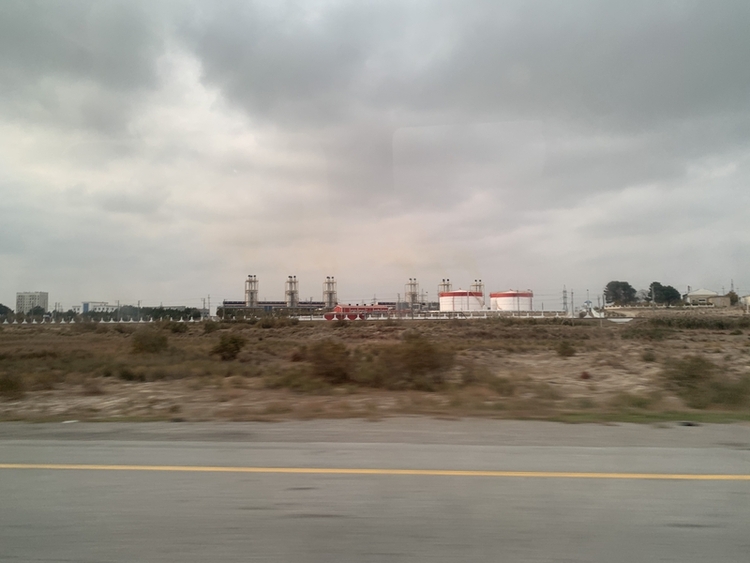 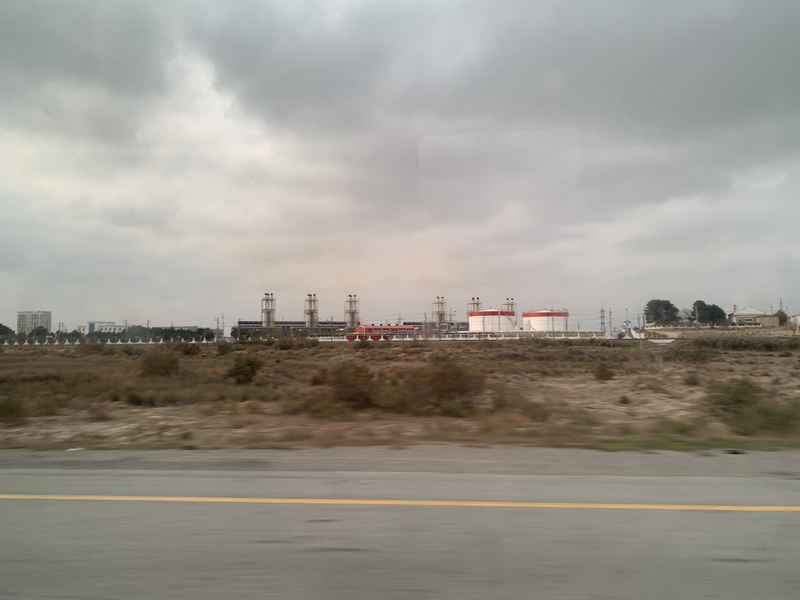 Credit: Crude Accountability Villagers also have to contend with the nearby Sangachal electricity plant, which started operating in 2008. 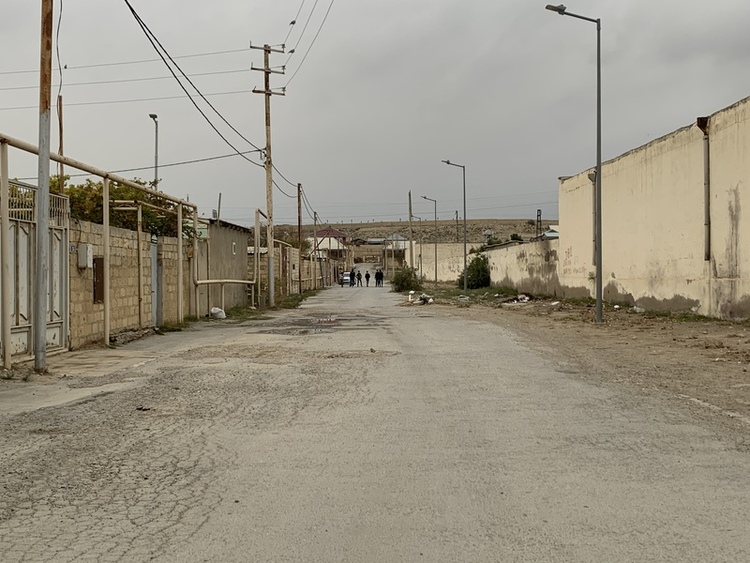 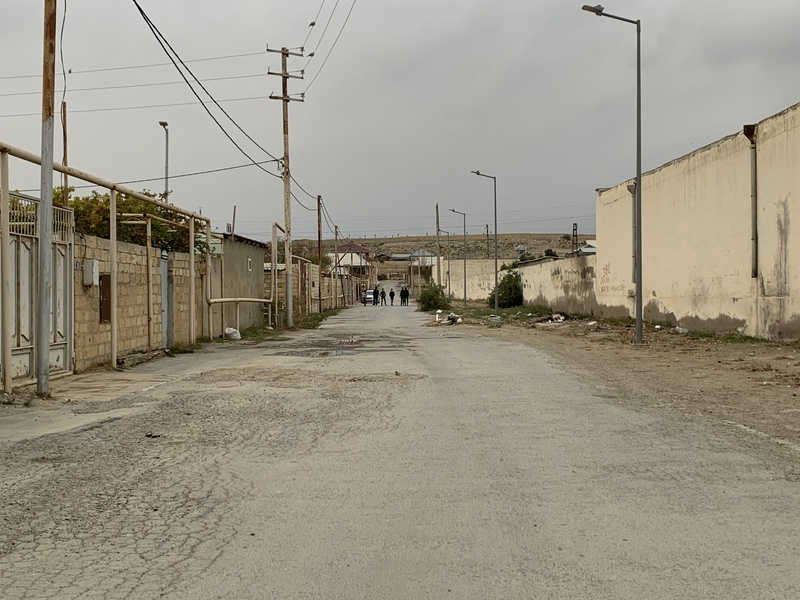 Mehriban said the pollution is at its worst when the cold north wind, known in Azerbaijan as the khazri, blows while the towers are flaring. She and other villagers complained about a yellow dust that sometimes falls from the sky and stains their washing.

“Yellow spots can be seen on our clothes. It happens especially when it rains and when the khazri wind blows,” Mehriban said.

“When the flaring starts and khazri hits, it becomes poison.”

Concerns have also been raised about insufficient environmental due diligence carried out by the European Bank for Reconstruction and Development (EBRD), which provided a $500 million loan to one of the investors in Shah Deniz 2, the Russian company Lukoil.

In 2017, Crude Accountability lodged a complaint highlighting significant gaps in the EBRD’s environmental and social impact assessment of the project and the lack of consultation with affected communities. It also pointed out the bank’s board had approved the investment three months before an independent environmental audit was finalized.

The EBRD’s complaint mechanism backed much of Crude Accountability’s account and said more monitoring and “guidance for its clients” should be put in place. In the latest update, released in July 2021, the EBRD said it expected to address the issues by the end of 2021.

A spokesperson for the EBRD said the bank no longer had an interest in Shah Deniz 2, as Lukoil repaid its loan in October 2021. They said there remain two outstanding “actions” associated with the project, but declined to comment on the villagers’ accounts of health problems and pollution caused by the flaring.

“The issue of flaring was raised in community meetings with BP in the past, and BP provided explanations about flaring levels. We are not aware of these issues being raised during the last reporting period,” the EBRD said.