At around 5:15 pm, on August 4, Ibtisam Mousa received a call from her husband Ghassan Hasrouti warning that he would be working late that evening at Lebanon’s only large grain silo in Beirut’s port.

His shift had ended about two hours earlier, but he had decided to stay to help unload a ship that was about to dock. Hasrouti often took on extra shifts at the silo where he had worked for nearly four decades, helping to feed Lebanon during years of civil war and economic crisis. 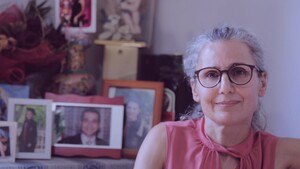 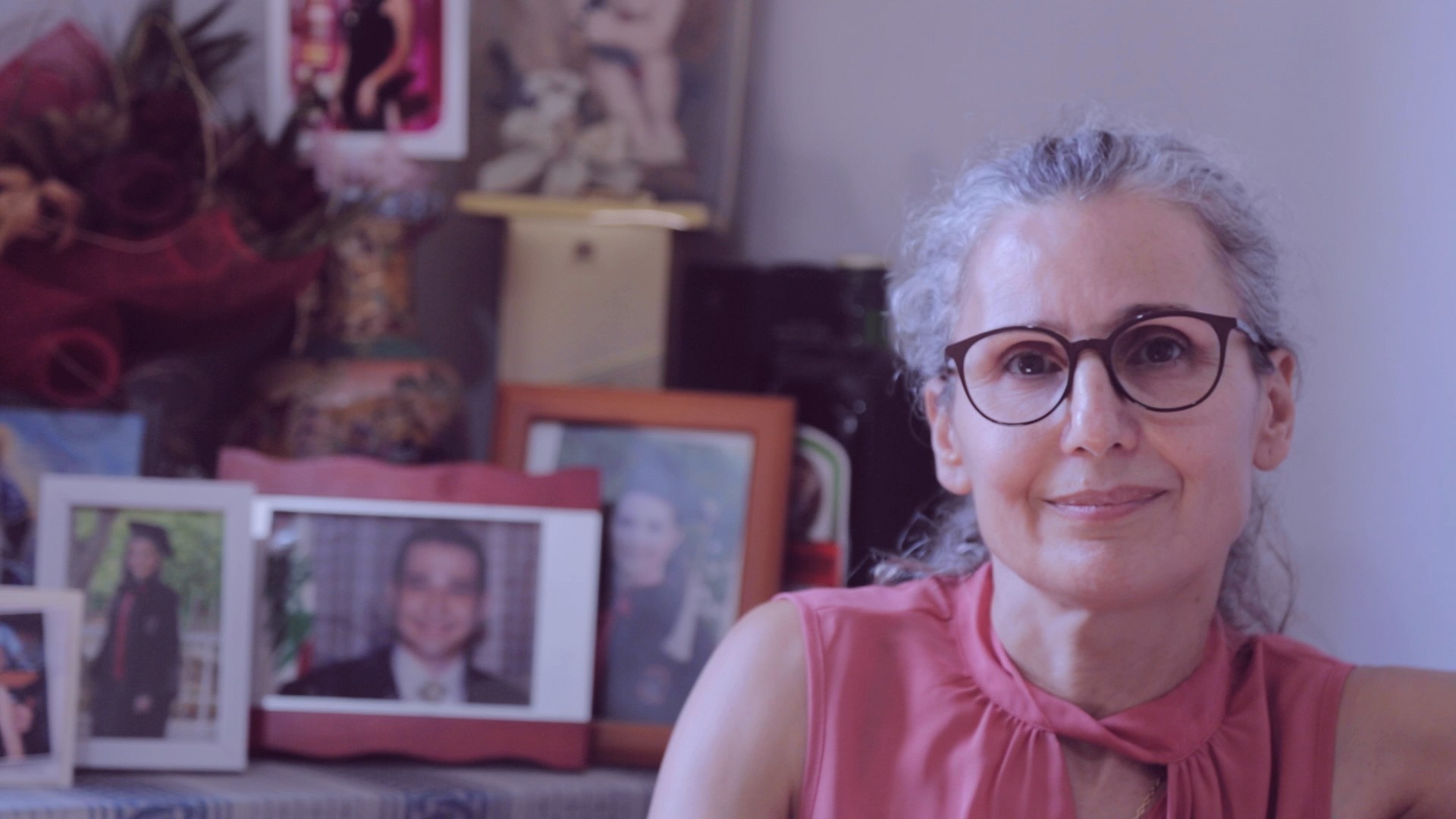 Credit: Daraj.com. Ibtisam Mousa surrounded by family photos in her home in the Beirut suburb of Sin El Fil.

“He told me, the other guys working [at the silo] want to go home… God help me tonight, as I can’t leave,” Mousa remembered Hasrouti saying.

She worried that her 59-year-old husband had not taken a pillow and sheet, as he usually did during night shifts, so he could take a nap in his office between managing the workers and sorting through paperwork. But she comforted herself with the thought that he could sleep properly once he returned home.

Less than an hour after Hasrouti called, a huge explosion at the port ripped through Beirut. The blast was so powerful that it shattered the windows of his family’s house 2 kilometers away, scattering shards of glass across the floor and furniture.

At least 182 people were killed when more than 2,700 tons of highly volatile ammonium nitrate that had been stored in a warehouse at the port since 2014 ignited. Some 6,000 were injured in the blast and 300,000 have been left homeless in the vast wasteland of destruction.

Hasrouti’s body has still not been found, but his family believes he was buried in the rubble of the grain silo where he had been working. His son, Elie, went to the port’s gate every day after the explosion hoping to be allowed to search for his father, until the army announced they had given up looking for survivors on August 9. 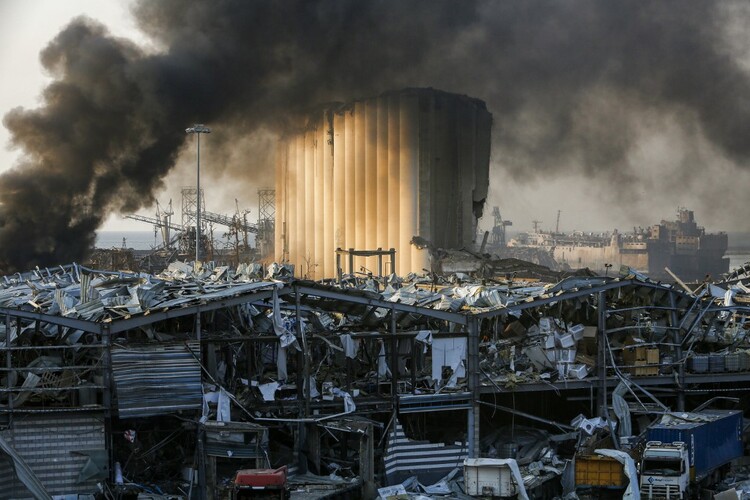 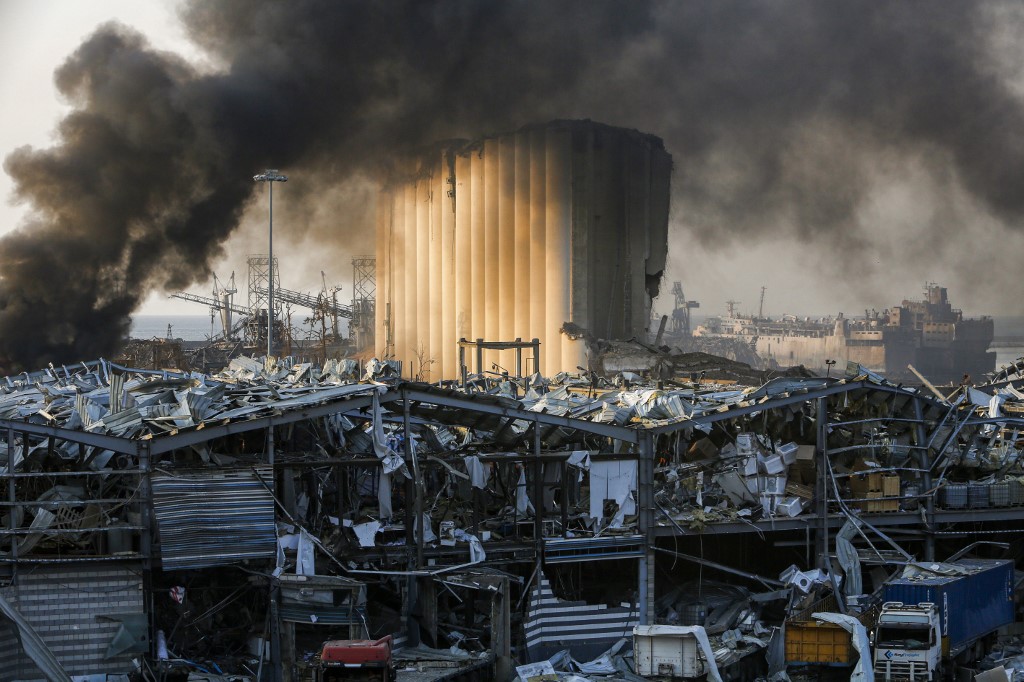 Credit: Marwan Tahtah/AFP The grain silo at Beirut’s port was devastated by the huge explosion on August 4.

Elie, 35, said his father saw the 122,000-ton-capacity silo that stood in the port during Lebanon’s 1975 to 1990 civil war as a refuge when warring factions traded bombs and missiles around the capital. The facilities were refurbished after the fighting ended.

“During the war, when bombing occurred and missiles often targeted the port, they’d quickly run down towards the storage wards on the ground floors and corridors,” he told Daraj. “Imagine how solid that building was.”

“All [of Hasrouti’s] colleagues were so proud of the fact that if they hadn’t gone to work and unloaded the wheat from the ships during the war, Lebanon would not have been able to receive these shipments nor get them distributed all over the country.” 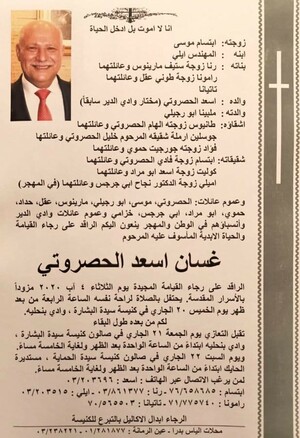 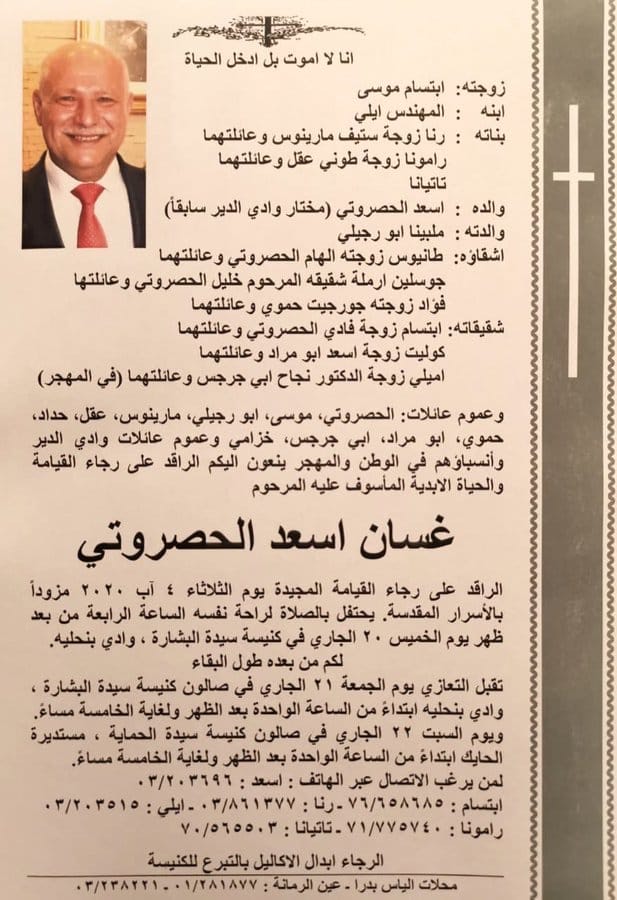 Mousa said sometimes her husband would stay in the port for four or five days at a time. “I kept telling him: You’re going to the port and leaving me here with the kids, what if something happens? He used to tell me: I worry about you at home, I don’t worry about me at the port,” she said.

Inside the family’s modest home, in a 1960s-era block in the middle-class suburb of Sin El Fil, photos show Hasrouti smiling, kissing his wife, and hugging his kids. Since he went missing his family has often left the door ajar during the day to allow in mourners, who are then seated on hastily assembled plastic chairs in the cramped living room.

The family say they feel let down by the state’s slow response to the disaster that killed their husband and father. On Tuesday they put out an announcement saying Hasrouti was presumed dead and on Thursday they held a funeral without his body.

“This explosion has revealed to all Lebanese that we have nothing in Lebanon. No state,” said Mousa. “Our state is corrupt and there is no one to care for us. If your state doesn’t care for you, then who should?”

Others agree. Former MP Elias Hankach, from the Kataeb political party, said the explosion was the culmination of three decades of misrule by a political “mafia.”

“The explosion was the climax,” he said. “There is no failure beyond this failure.”

Lebanese lawyer Diala Shehade also questioned whether the current investigation into what caused the explosion is truly independent, arguing that the whole thing “started on a wrong foot and therefore should be annulled.”

Hasrouti’s youngest daughter, Tatiana, is studying law and insists she will use her university degree to hold accountable the people responsible for the death of her father and other victims of state negligence and irresponsibility.

She had always told her dad she didn’t feel safe and wanted the family to leave the country, she said, but “he always urged me to stay optimistic and remain in Lebanon.” She and the rest of the family took part in anti-government demonstrations that erupted in Beirut on October 17 last year to demand accountability and an end to political corruption.

Fresh protests swept the capital after this month’s explosion, forcing Prime Minister Hassan Diab and his cabinet to resign.

“How can they sleep at night after all what they’ve done?” Tatiana said. “They killed us during the war, and they’ve killed us now. How do they still have the guts to stand up, address us, claim that they love us, and that they work for us?”