On the morning of July 31, 2018, Ukrainian activist Kateryna Gandziuk, a strident critic of corrupt local elites in the southern Ukrainian city of Kherson, had just left her apartment building to go to work when a man approached and poured a liter of sulfuric acid over her, burning and disfiguring much of her body.

Three months and 14 operations later, Gandziuk succumbed to her injuries.

Even in a country long inured to corruption, Gandziuk’s murder sparked outrage. She was one of nine activists to be attacked — and the third to be killed — in the country in 2018.

Law enforcement officials responded to the assault by arresting six people; a senior local official is suspected of organizing the murder. One further suspect has fled and is wanted by the authorities.

But those arrests have not satisfied Gandziuk’s friends and activist colleagues, who formed a movement called “Who ordered the killing of Katya Gandziuk?” after the attack. The group believes that she had a far longer list of enemies, and that those who attacked her had the protection of the country’s law enforcement. 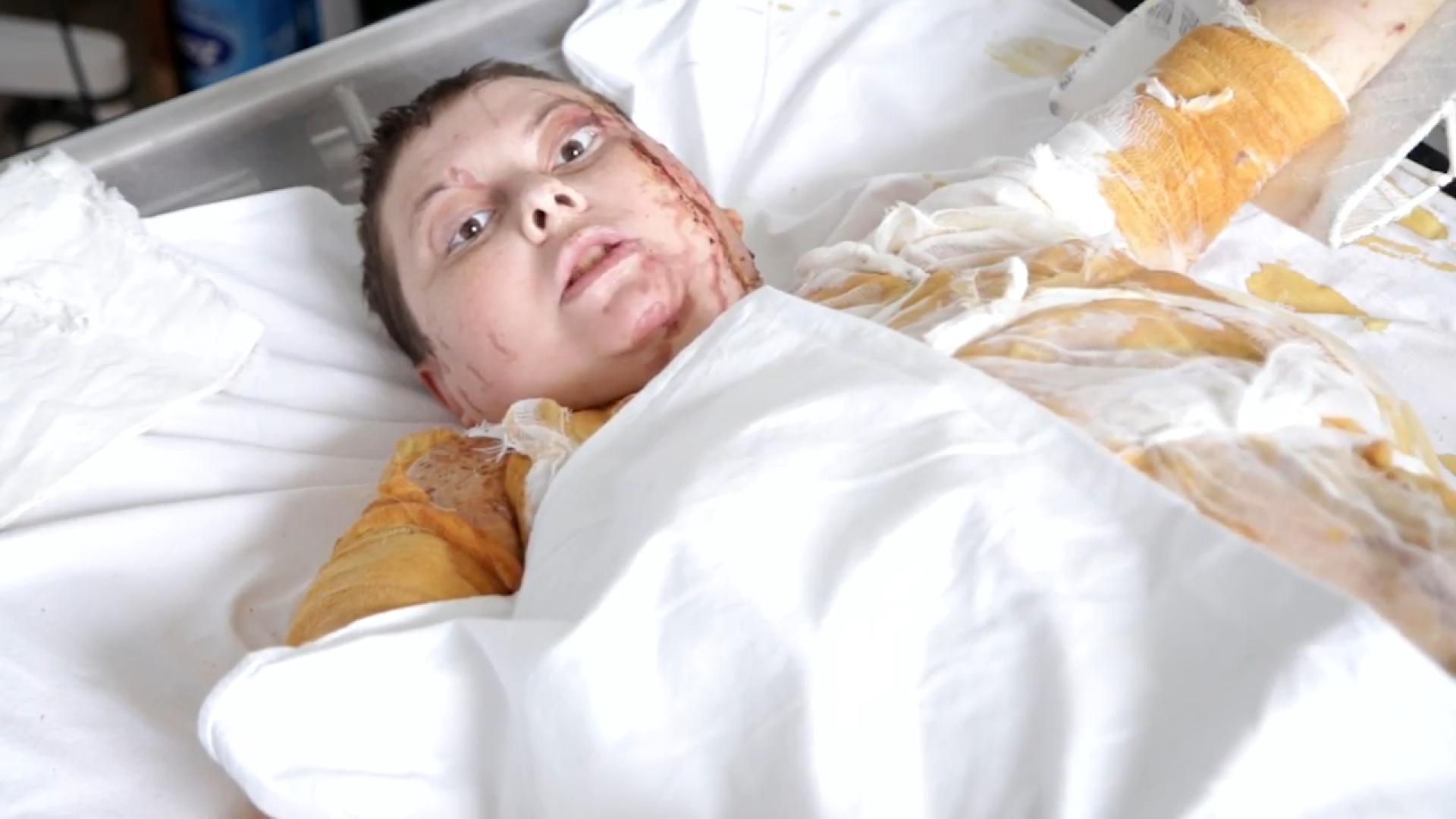 Kateryna Gandziuk in the hospital shortly before her death. Credit: Hromadske

An investigative documentary released on March 25 by Slidstvo.info, OCCRP’s Ukrainian member center, also raises troubling questions about the investigation into the attack.

(Watch the documentary with English subtitles.)

Phone records obtained by reporters show that one of the key suspects, who allegedly handled payments for the assault on Gandziuk, was in frequent contact with more than a dozen police officers, prosecutors, and employees of the SBU, the country’s security service, both before and after the attack.

This raises the question of whether officials knew of the attack on Gandziuk before it happened and whether the investigation has been compromised.

At 33, Gandziuk had made plenty of enemies in Kherson, her hometown, where she had served since 2016 as an advisor to its mayor, Volodymyr Mykolayenko. Unusually for a public servant, she was also a prominent activist, taking on diverse causes such as promoting youth sport and countering Russian propaganda.

What she was most known for, however, were her biting critiques of corruption and abuse by local officials, which she frequently published on her Facebook page.

Shortly before the attack, for example, Gandziuk trained her sights on what she alleged was corruption in the local forestry sector. On her Facebook page, she critiqued the use of illegal tree cuttings following intentionally set forest fires.

She also helped produce а short film published online that accused Vladyslav Manger, the head of Kherson’s regional council, of political corruption and conducting semi-criminal businesses. Manger attempted to sue those involved in the film’s production in response, but was defeated in the Supreme Court in June 2018.

In an interview with OCCRP in her hospital bed less than three weeks before her death, Gandziuk said she believed Manger harbored a grudge against her.

“I think the most sensitive thing was that Vladyslav Manger lost at the Supreme Court, where the facts we presented in the program we filmed a year ago were recognized as true. It really touched him in the raw,” Gandziuk said. She said Manger could possibly be behind the attack, and also that someone in his “criminal environment” could have carried it out as a “gift” for him. She expressed pessimism that police would get to the bottom of the case.

“I don’t trust the official investigation, [or] that they will be officially brought to justice,” Gandziuk told OCCRP. 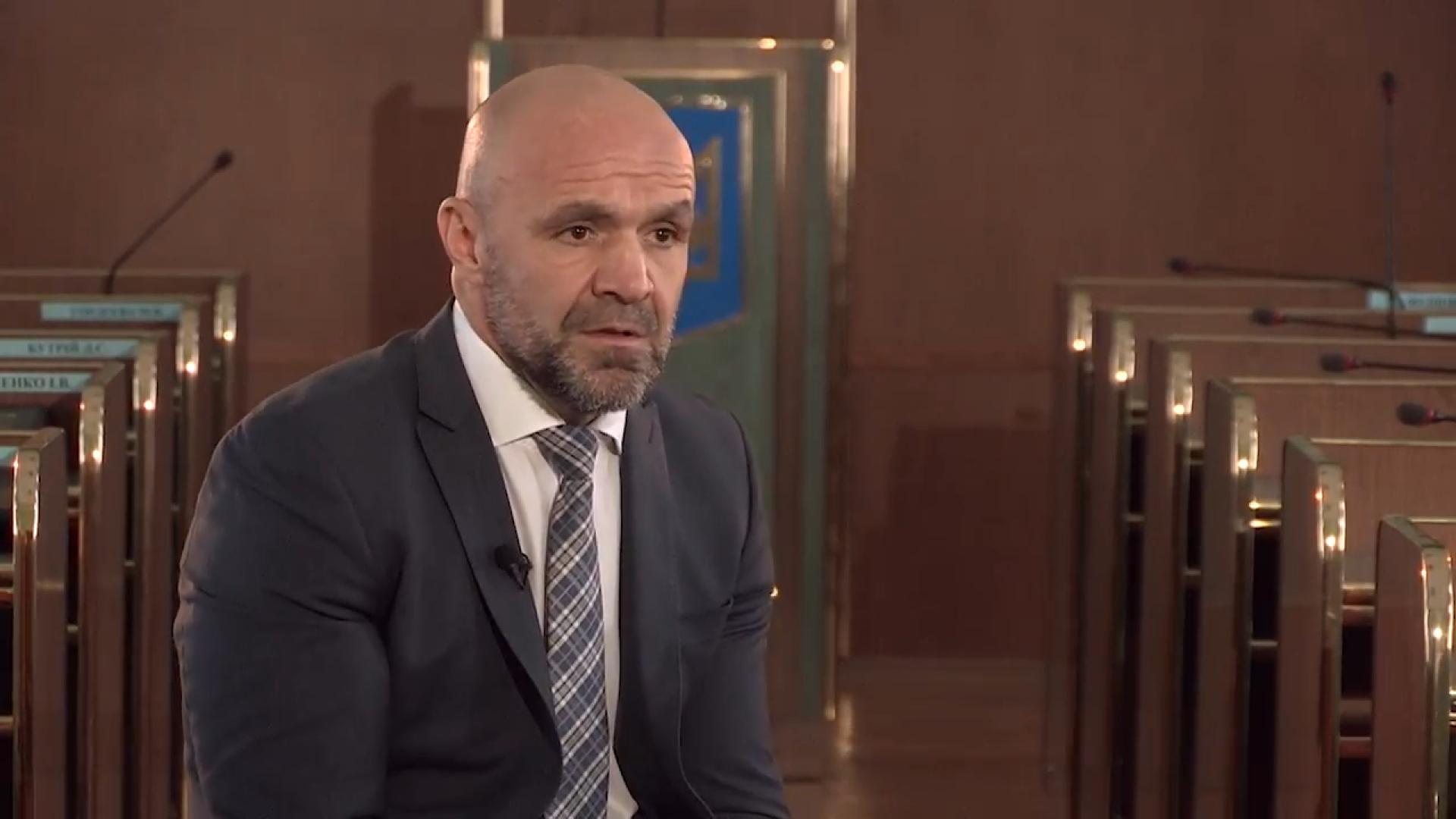 Speaking to reporters in November, shortly after Gandziuk’s death, Manger rejected the allegations made in her video story. “Ninety-nine percent of the movie is false,” he said.

Reporters shared a recording of part of their interview with Gandziuk and asked Manger why she would have accused him. His first reply was to say that he would have liked to ask her the same thing. Pressed on the issue again, Manger said only that he “didn’t have a personal conflict with her.”

He also rejected her accusations that someone may have attacked her as a “gift” for him. “What ‘gift’?,” he said, repeating that he didn’t have a conflict with her.

Manger was detained in February as a key suspect in Gandziuk’s murder, and is now awaiting trial on a 2.5 million hryvnia (US$92,000) bail. Prosecutors have alleged that he organized the attack in retribution for the activist’s forestry allegations. He said he is being targeted for political reasons.

However, activists say his detention has left important questions unanswered.

From the very beginning, Gandziuk’s friends and associates had little faith in local authorities’ willingness to properly investigate the attack. They banded together in a local movement dedicated to getting to the bottom of the case.

“We realized that if we wanted the guilty to be punished … and the investigation to move, we had to press [the authorities],” said Roman Sinitsyn, a Kherson activist close to Gandziuk.

“On the [day of the attack], we went to the prosecutor’s office — noisily, banging down the door, with smoke bombs — and pulled the prosecutor out to talk. They were all scared. They promised us that everything would be OK.”

On August 3, 2018, police detained a local man they alleged was involved, but were forced to release him after Gandziuk’s supporters’ own investigation showed that he was out of town on the day of the crime.

Later that month, police arrested five new suspects, all of them former soldiers who fought a war against Russia-backed separatists in eastern Ukraine. The alleged leader of the group, Serhiy Torbin, was accused of recruiting his subordinates from the war to carry out the acid attack on Gandziuk and paying them $500 each.

Following public pressure, the case was transferred to the SBU in Kyiv in November. The agency soon arrested Igor Pavlovskyy, a former assistant to a member of the national parliament, for allegedly organizing payment to Torbin and his attackers.

According to a court document, Pavlovskyy met in his home on August 17 with Torbin and Oleksiy Levin, who Gandziuk said was a criminal associate of Manger’s. In the meeting, the document says, the men discussed how to evade arrest, and Pavlovskyy gave Torbin part of the payment for the attack.

Levin, who has fled an arrest warrant, told OCCRP in a phone interview from an undisclosed location abroad that he had nothing to do with the assault on Gandziuk. 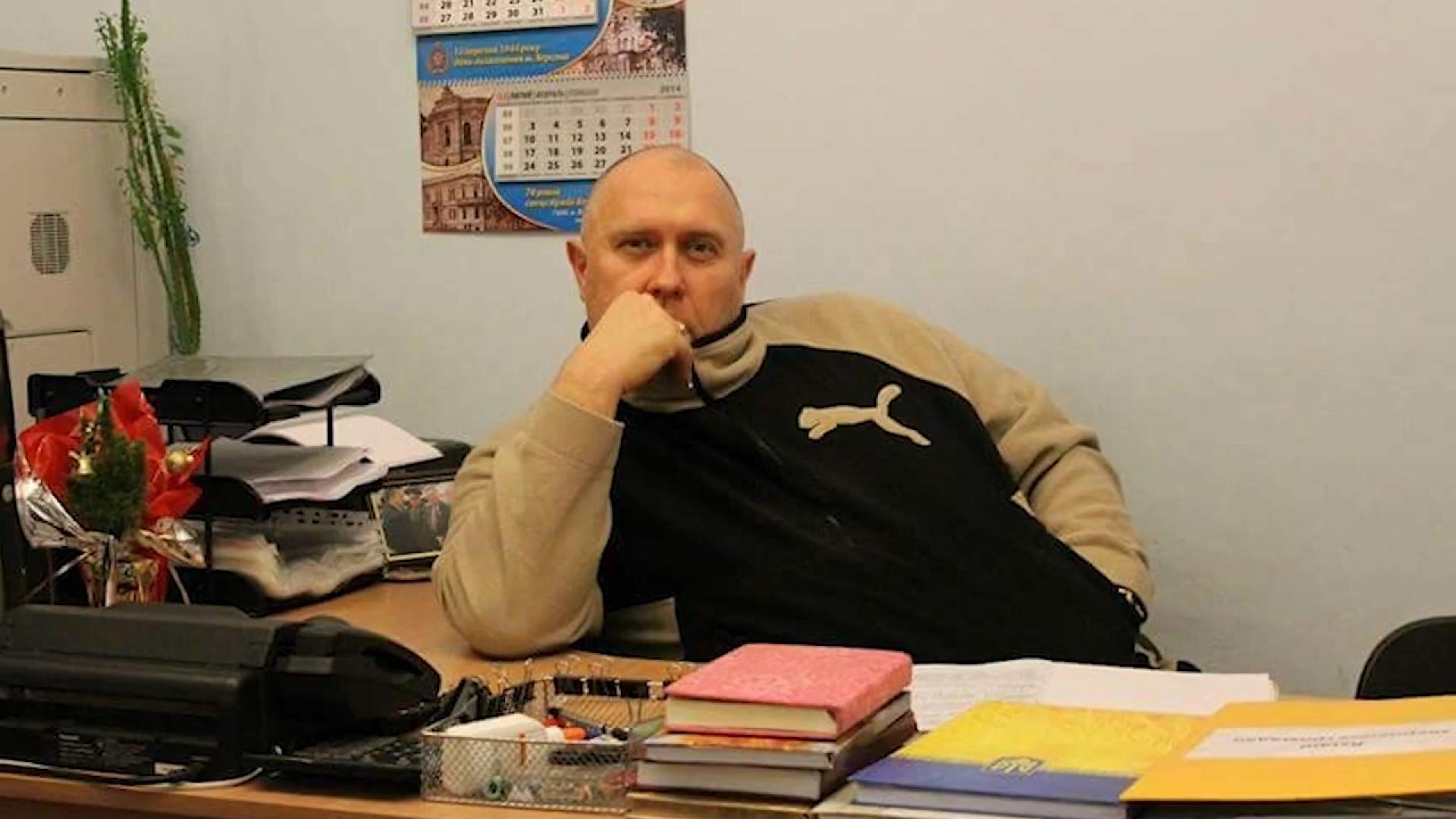 A Web of Contacts

In doubt of the quality of the official investigation, journalists managed to obtain Pavlovskyy’s mobile phone records. The data covered the two months prior and more than four months following the attack on Gandziuk, and show roughly 32,000 messages, phone calls, and internet log-ins.

The records show that, until his arrest on November 12, Pavlovskyy was in frequent contact with law enforcement and SBU officials. These contacts included the days immediately surrounding the acid attack on Gandziuk, as well as at key moments in the early investigation.

On July 31, the day of the attack, Pavlovskyy was in contact with Anton Zaporozhets, an SBU officer who lived in Gandziuk’s apartment building; and Borys Plakhuta, a senior SBU official in the Oleshkovsky District, where the forest burning had occurred. Plakhuta was a frequent contact: He and Pavlovskyy were in touch on nearly 30 occasions in the summer and autumn of 2018.

Both Plakhuta and Zaporozhets declined to comment when contacted by OCCRP.

On August 1, the day after the attack, Pavlovskyy made three separate, brief phone calls to Serhiy Sydorenko, then police chief of Nova Kakhovka in the Kherson region, whose precinct covers the burned forest.

“I have nothing to do with all these events at all,” Sydorenko said in an interview. “Who I contact is my own business.”

Pavlovskyy’s phone records show that he also spoke with other officials in the police and interior ministry in the few days after the attack in early August.

By August 8, though an innocent man had been detained, there was a break in the case. The national police published closed circuit camera images of one of the five war veterans buying acid in a Kherson store. The evidence would lead to the arrest Torbin and his fellow veterans.

As the net tightened on Torbin’s group in the second half of August, Pavlovskyy began speaking to two prosecutors with increasing frequency.

One of them was Oleksandr Korol, the head of the Nova Kakhovka prosecutor’s office. The men spoke and messaged each other 160 times in the six months for which OCCRP examined records.

As with several other figures contacted for this article, Korol explained his communication with Pavlovskyy as stemming from the latter’s duties as an assistant to a member of parliament.

“Maybe we talked. [Pavlovskyy] was an assistant to the member of parliament, there were always requests,” Korol said. “I didn’t talk with him about Katia Gandziuk at all.”

The deputy prosecutor for the Kherson Region, Kostiantyn Shabunyaev, had 79 contacts with Pavlovskyy, including on key dates close to the attack. Shabunyaev told reporters that he didn’t have “any connection” to the case.

“I talked with Pavlovskyy about work issues,” he said. “He came on the visiting days or on days off” to make requests, Shabunyaev said.

Pavlovskyy’s former boss in the national parliament, Mykola Palamarchuk, said he had no valid professional reason for doing so. “He can’t write a request by himself and can’t pass it by himself, it’s simply not his function,” he said.

OCCRP obtained documents that show the investigation may not have followed every lead.

On the day before her death, Gandziuk sent a Facebook message to friends saying that she suspected the deputy head of the Kherson regional state administration, Yevhen Ryshchuk, could have been behind the attack.

According to a court ruling based on information compiled by SBU investigators, Ryshchuk is also under suspicion, alongside Manger, of orchestrating the forest fires that Gandziuk criticized.

But despite the SBU stating they believe the forestry scandal was the motive behind the attack — and the fact that the court ruling named Ryshchuk as a potential suspect — he was, in the end, questioned only as a witness.

Ryshchuk himself denies any involvement in Gandziuk’s murder. In an interview, he denied ever knowing her.

Pavlovksyy was also in frequent contact with Oleksandr Gusarev, the head of the local prison, beginning on August 21, the date of a court hearing for Torbin and some of the other veterans. These contacts — numbering 16 in total — continued through September and October.

When contacted by OCCRP, Gusarev said he hasn’t spoken with Pavlovskyy.

Serhiy Kniazev, the head of the National Police, said that potential conflicts of interest were one of the reasons the case was transferred to the national level.

“We can confirm that he has friendly relations with law enforcement in the Kherson region, because he is a resident of the Kherson region. And this was one of the reasons why the criminal proceedings were handed over to the main investigative department … We very quickly removed the local police from carrying out basic investigative and operational measures,” Kniazev said.

In response to requests from Slidstvo.info, the interior ministry (representing the police) and the SBU office in Kherson said they had had no formal contacts with Pavlovskyy in 2018. The Kherson prosecutors’ office said they could not comment.

In a press briefing on February 11, 2019, Lutsenko showed reporters a chart of persons of interest in the investigation, complete with portraits. Among the names was one entry covered with a white square.

“Here’s one more glued up square. These are probable links in the authorities and law enforcement agencies that contributed to the commission of this crime. For now, there is not enough evidence for suspicion, but work is underway,” Lutsenko said.