Though supposedly an importer of construction materials, the company was registered in an apartment in a residential building and had no warehouse. It appeared in no internet searches and had no visible business presence. In fact, it didn’t even exist until days before opening its account.

Then it started moving money.

The Sokhtmon affair was used to justify efforts to force Imon's founders out of the company — a hostile takeover that was aggressively pushed by Tajikistan’s National Bank.
Read more

In just five months, Sokhtmon N (‘Construction ‘N’) deposited so much cash that Imon employees had to buy extra counting machines and work past closing hours to handle the load. Sokhtmon then had Imon convert its deposits into U.S. dollars and send the money, $48 million in total, to a group of companies in China and Hong Kong.

In less than half a year, Sokhtmon’s transfers represented nearly 20 percent of all of the money Imon’s clients sent abroad over five years.

When these transactions came to light, they revealed serious lapses in Imon’s anti-money-laundering standards and became a key episode in a battle over the microlender’s future.

The affair is far from unique in Tajikistan. In fact, such suspicious transactions are a fundamental part of the country’s so-called “gray economy,” in which local entrepreneurs use dodgy intermediaries to buy goods for import. Such practices undermine the rule of law and risk providing cover for serious criminal activity.

”It’s not good, definitely, for a financial institution,” said Zakir Abdrashitov, Imon’s former general director. “This is the way the system works in Central Asia.”

But Imon wasn’t just any financial institution. It had grown from a small nonprofit founded by two local women into one of the country’s most respected commercial lenders. The company had attracted prestigious international investors who are drawn to its socially responsible mission of lending to women entrepreneurs.

In fact, by the time the Sokhtmon transactions took place, Imon’s board was dominated by its foreign shareholders, including influential development organizations like the European Bank for Reconstruction and Development (EBRD).

“The point of these external investors is … about ensuring that governance of the organization is fit for purpose, because it’s now an international one,” said Graham Barrow, an independent financial crime specialist. “And it looks, from an external point of view, that that governance wasn’t as robust.”

“It just looks rather poor for an international banking organization to have not applied international standards, or been seen to try to remedy that situation,” he added.

An EBRD spokesman, Anton Usov, did not respond to specific questions about the Sokhtmon transactions, but said that “Imon’s internal control framework and processes were enhanced … with the oversight of IMON’s Board of Directors and shareholders” after the problem was identified.

Imon’s other foreign shareholders did not respond to questions about these transactions. According to an internal document, Imon has since improved its anti-money-laundering standards, but its current management did not reply to requests for comment. 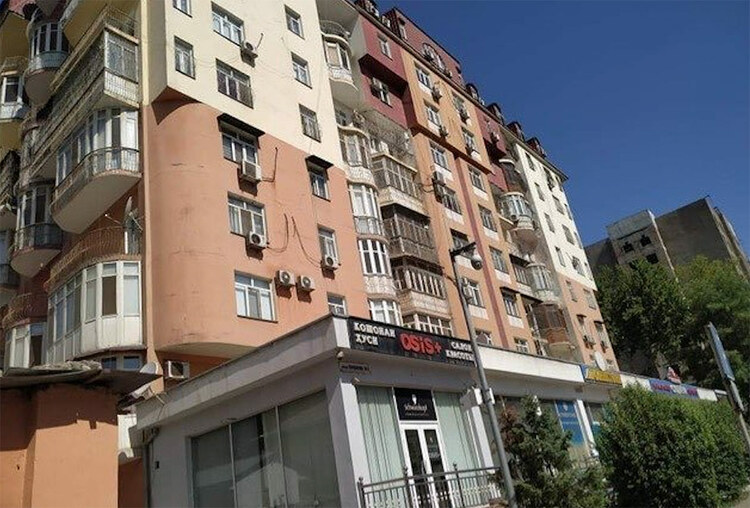 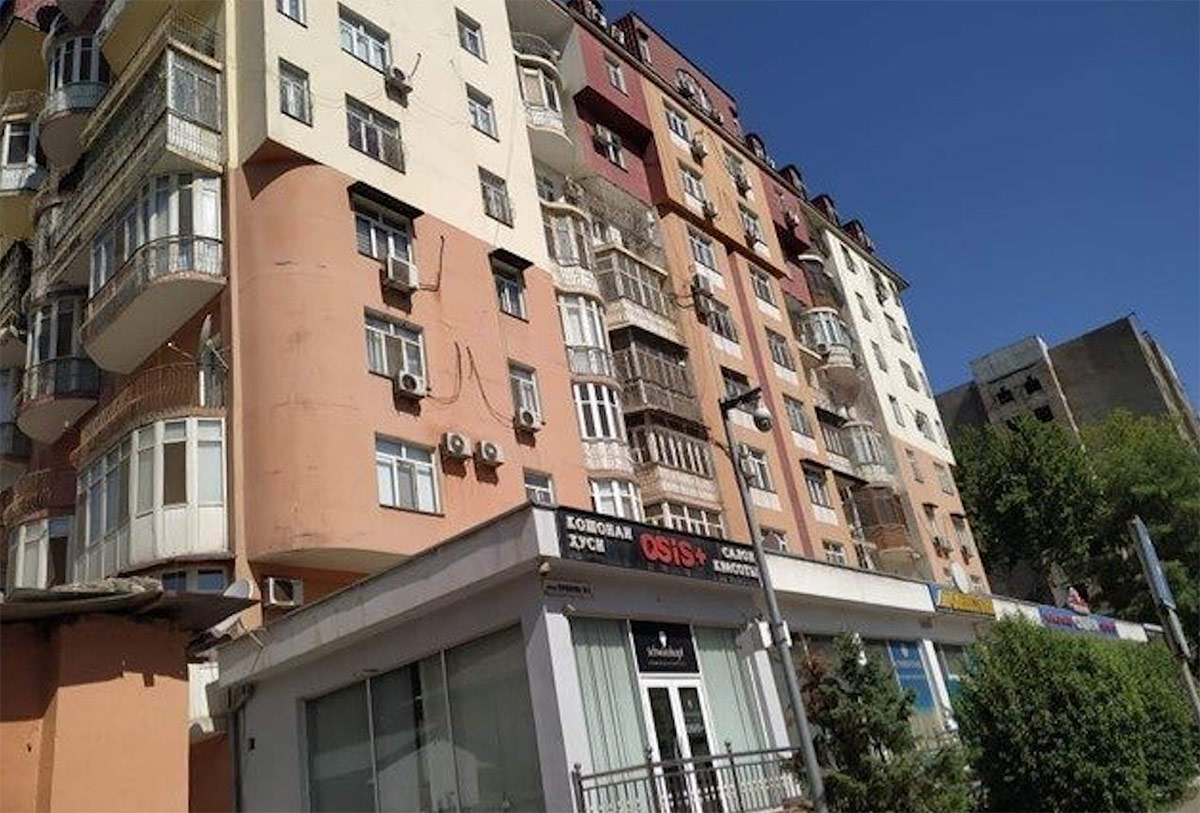 Credit: OCCRP Tajikistan Imon’s new client, supposedly an importer of construction materials, was registered in this building on Pushkin Street in Dushanbe.

The Sokhtmon affair was investigated twice, one by Imon itself and the other by Deloitte, an international accounting firm.

Reporters obtained both reports, providing a rare glimpse into the internal operations of a Tajik financial institution as it dealt with a problematic client and the subsequent fallout.

Though neither report revealed the name of the client, OCCRP was able to identify Sokhtmon by matching partially redacted data with the Tajik company registry. The registry revealed the name of a woman registered as its owner, but she had no other businesses and appeared in no internet searches, raising the question of how she would have access to this kind of money. Despite extensive searches, reporters were unable to identify who was really behind Sokhtmon and its millions. 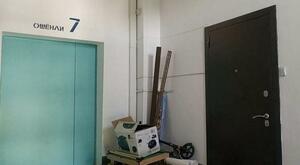 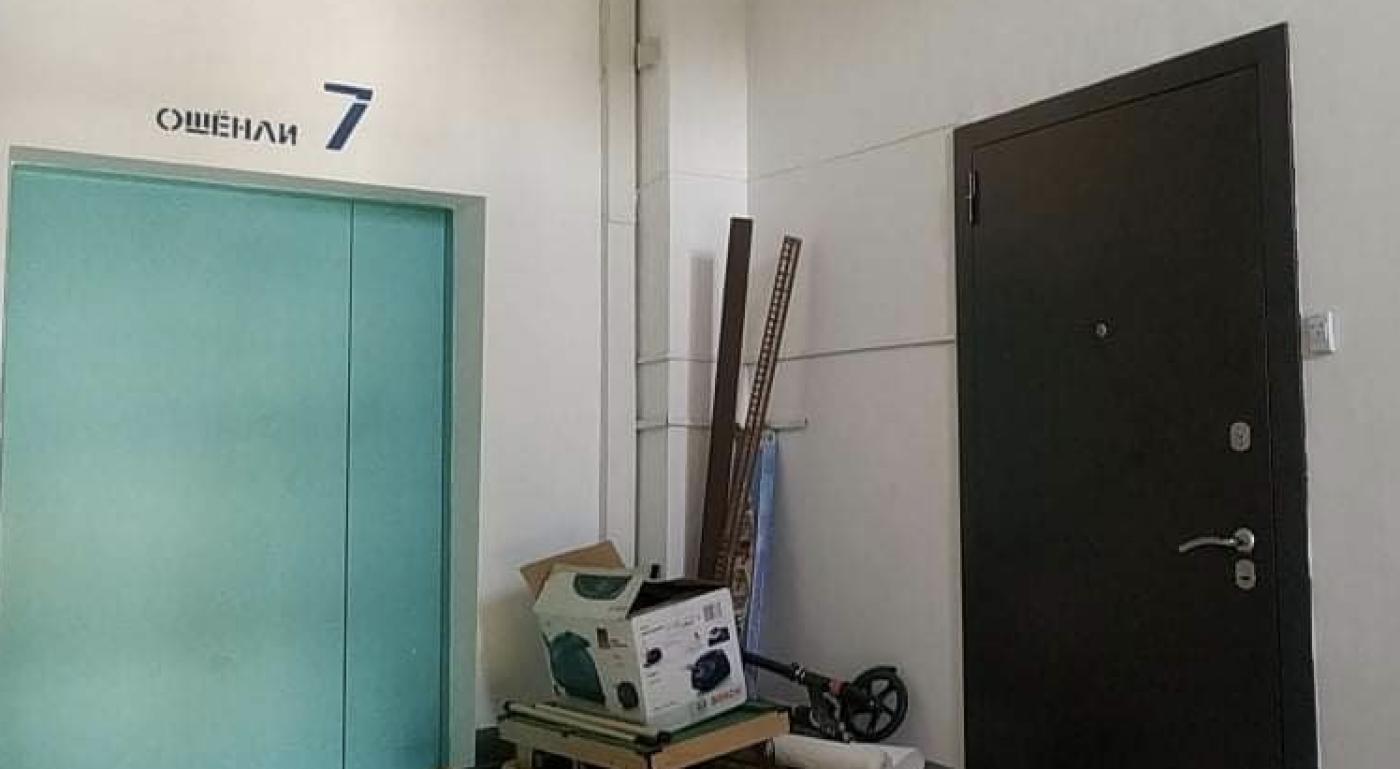 Credit: OCCRP Tajikistan Sokhtmon N was registered in this apartment.

Imon employees seemed to know little more themselves — even as they allowed Sokhtmon to keep moving its money through their institution. Though the company had all the hallmarks of a high-risk client, they did not obtain basic information about its operations or try to verify its business activity. Imon employees even accepted deposits on Sokhtmon’s behalf from people who did not appear on its documents.

Sokhtmon carried a continual zero balance, a telltale sign that it was using its bank accounts for no reason other than moving money abroad. It provided documentation for only a portion of the imports it said it was making.

Its counterparties in China and Hong Kong also raised questions. Most did not appear in any public sources as legitimate businesses, and many were registered by the same corporate services provider at the same mass registration address. Sokhtmon submitted contracts to justify its business with them, but some appeared to have been copied from a Russian template and contained other errors.

According to Deloitte, Imon’s compliance department “did not conduct any detailed analysis or in-depth vetting of [Sokhtmon]” despite the “uniformly suspicious character” of its transactions. 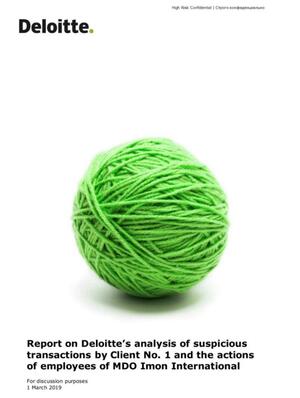 Credit: OCCRP The Deloitte audit report obtained by OCCRP. It is marked “draft” and “for discussion purposes only.” OCCRP did not obtain a copy of the final report, if there is one. Click to enlarge.

As these transactions mounted, a branch manager contacted the department with his concerns, but was told the issue was already being looked at. In an email quoted in the Deloitte report, he wrote that he wanted to “stop all further transactions” with Sokhtmon as early as September — months before its accounts were finally closed — but was told by Imon’s head office that “there are no problems with [Sokhtmon] and we must continue providing services to it.”

Imon managers actually encouraged Sokhtmon to deposit large sums because this helped resolve a shortage of Tajik currency in its branches, the Deloitte report read.

Imon’s compliance department did repeatedly contact Tajikistan’s National Bank for guidance, sending a memo detailing Sokhtmon’s problematic features and asking for “instructions regarding the necessity of taking additional measures.” They also sent other documents, including contracts and information about Sokhtmon’s counterparties.

“The National Bank knew to the penny how much money was transferred to China,” said Abdrashitov, Imon’s former director. “We’re talking about tens of millions of dollars.”

But according to the Deloitte report, the National Bank did not respond “despite repeated calls and emails.” As a result, Imon employees “independently decided to continue working with [Sokhtmon], even though its transactions were of a uniform character and featured suspicious indicators.”

The National Bank did not respond to reporters’ questions about why it did not react to Imon’s requests for guidance in the Sokhtmon case. One reason may be that such companies are a common part of the country’s pervasive gray economy — and that those who organize them have high-level connections.

This was no secret to Imon’s leadership. Deloitte quoted Gulbakhor Makhkamova, Imon’s general director at the time, giving her view on the situation in an internal email.

“The structure of the country’s economy is such that there are intermediary companies that carry out all transactions for small and medium-sized businesspeople,” she wrote. “Usually, such middlemen companies aren’t in business for very long but enjoy patronage protection while they are actively carrying out transactions.” 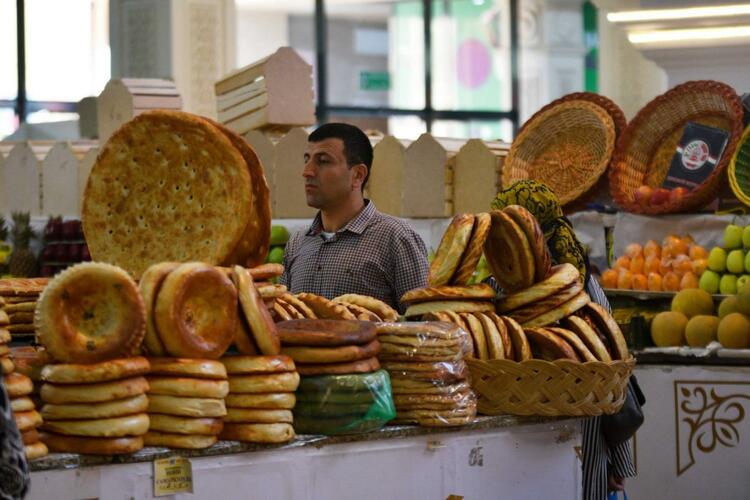 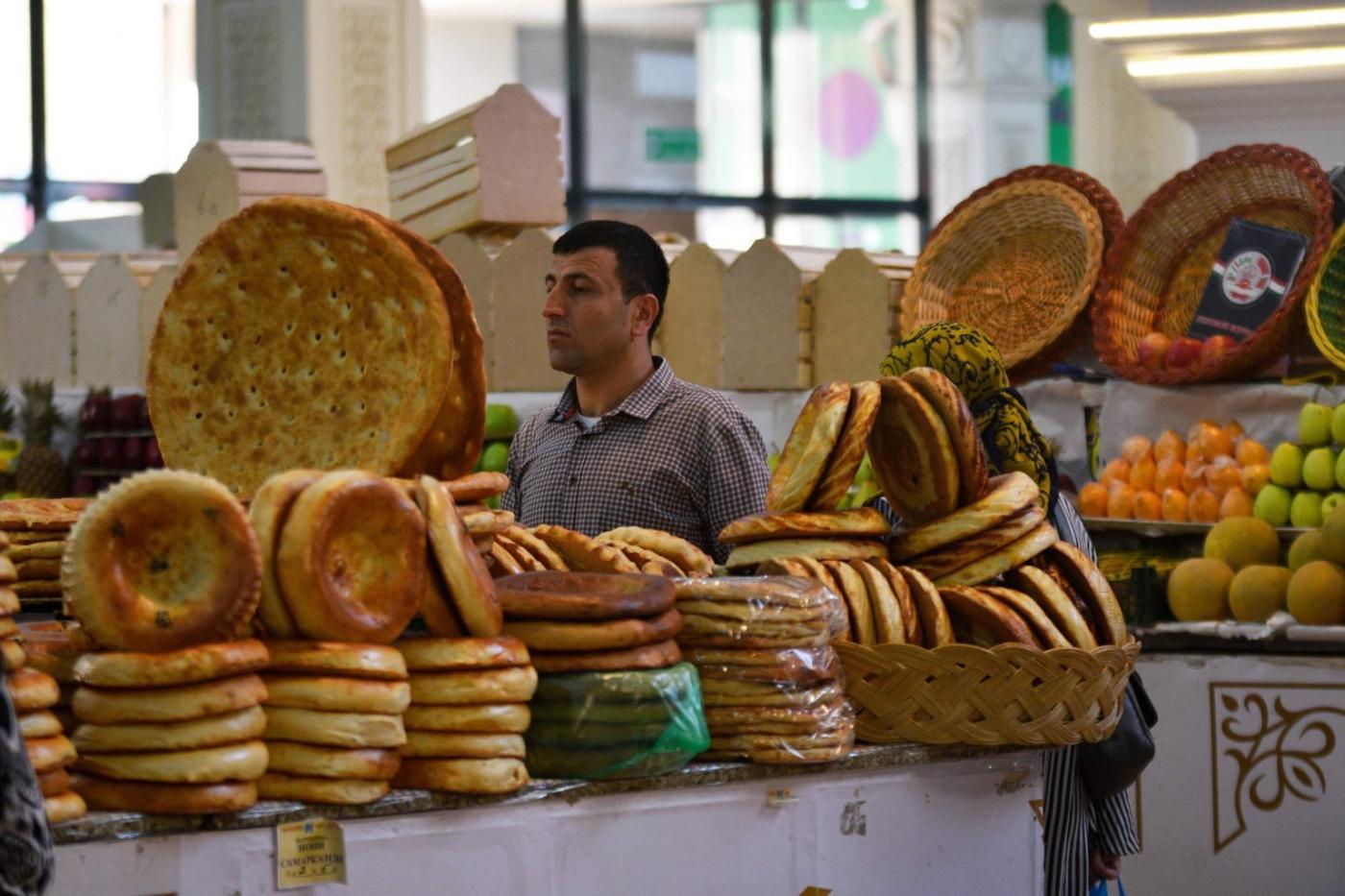 Credit: FAO/N. Kalandarov A bread seller in a Dushanbe bazaar.

Indeed, both investigations concluded that Sokhtmon was likely an intermediary that made foreign purchases on behalf of local merchants. Such arrangements are used to solve logistical headaches, avoid fees and taxes, and take care of currency conversions and transfers.

They are openly advertised on Tajik websites:

🔗“Why You Should Entrust Us With Buying Your Goods”

In its analysis of Tajikistan’s gray market, Deloitte translated an advertisement, posted on a Tajik website, of a company offering to buy and import goods from abroad:

“We’ve been working with China for 10 years already and, so, we know all the nuances involved in optimizing transport costs,” it read. “Plus, we understand Chinese business culture and have our own warehouses and staff.”

It then explained the pitfalls of failing to commission its services:

“Let’s say, for example, that you want to go to China yourself,” it warned. “You could end up wasting a lot of time searching for what you need.”

“You could end up buying goods from unscrupulous, dishonest suppliers,” it warned. “If you don’t speak Chinese, you’ll have to hire an interpreter.”

It then touted the financial advantages of its services: “You may not know the proper procedure for shipping goods to Tajikistan ... But, by bundling various shipments into large lots, we can achieve a relative reduction in the weight of your freight, which in turn will help us to realize significant savings in transport costs.”

“Many factories will sell their goods at non-inflated prices only if you send the money directly from a Tajik entity,” it read. “We have our own company that has the ability to transfer funds to the accounts of Chinese companies and, this way, we could save you at least 10-17% on account of VAT alone.”

But that doesn’t make them innocent. The use of intermediary companies makes it difficult to ensure transparency in Tajikistan’s international trade and implies possible evasion of taxes and import duties.

They can also provide cover for more nefarious activities. “Based on our practical experience,” Deloitte wrote, “such legitimate import-export transactions [can be] alternated with transactions designed to siphon money out of the country.”

Though neither report found evidence of money laundering in this case, Imon’s lapses make it impossible to know for certain. Tajik officials investigated Sokhtmon after it closed its accounts, but didn’t make public the results of the probe.

In addition to Sokhtmon, the Deloitte audit identified another nine Imon clients that exhibited similarly suspicious features, including the use of identical counterparties, depositors, registration addresses, and corporate officers.

Between January 2014 and December 2018, these clients sent $61 million abroad through their Imon accounts. Their identities were not revealed and the reasons for their transfers were not established. According to Deloitte, Imon staff had identified at least some of these clients as suspicious, but “did not perform a detailed analysis of [their] activities,” and Makhkamova, the general director, “took no action to prevent further business dealings with them.”

In total, their transfers, along with Sokhtmon’s, represented 44 percent of all of the money Imon’s clients sent abroad over that period. Deloitte’s conclusion was that Makhkamova “was not particularly focused on [anti-money-laundering] issues.” (She declined to comment for this story.)

But the problem was more systemic than that.

Having discovered multiple other suspicious clients, Deloitte concluded that Imon was “incapable of instituting sufficient barriers and checks that would enable the timely identification of and response to suspicious transactions.”

By this point, Imon’s foreign shareholders had long held a majority on its board, and the company prided itself on adopting the best principles of corporate governance from its international partners.

Barrow, the independent financial crime specialist, said they should have shared responsibility for the episode. “The whole point about getting external investment is to have the level of expertise necessary to run a business of that scale,” he said. “They should have known far better … and taken proper accountability for it.”