Costly works of art, including a painting by Ilya Repin and a sculpture by Salvador Dali, were among the assets acquired by offshore firms controlled by Petro Poroshenko. Austria’s Raiffeisen Bank enabled his deception, listing one of Poroshenko’s associates as the companies’ owner.

In the early 2010s, Petro Poroshenko — a billionaire who had just served a stint as Ukraine’s foreign minister, and would later be elected president — built a palatial estate for himself outside Kyiv. He just needed furnishings to match his new home’s grandeur.

Using an offshore company based in the British Virgin Islands called Vernon Holdings, Poroshenko and his wife, Maryna, proceeded to purchase over $100,000 worth of plush fittings from luxury Italian furniture-makers between 2009 and 2012, according to invoices and other documents viewed by OCCRP.

According to documents leaked in 2019 by anti-corruption “hacktivists,” Poroshenko’s family controlled the company. He was also the beneficiary of an insurance policy issued to Vernon. But you would never know it to look at the records of Austria’s Raiffeisen Bank International, where the offshore kept its accounts. Instead of Poroshenko, the bank listed his employee and longtime business associate, Sergiy Zaitsev, as the beneficiary.

That was just the beginning. Drawing on banking records, correspondence, invoices, and other documents, an OCCRP investigation has found that Raiffeisen — Austria’s second largest bank by assets — allowed Poroshenko to use Zaitsev to mask his control of at least six offshore companies used to fund business activities and personal dealings, including multimillion-dollar art purchases.

Raiffeisen identified Zaitsev as the beneficial owner of most of these companies, and he signed company documents for others — even as they handled tens of millions of dollars for Poroshenko before and during his presidency, according to emails and documents obtained by OCCRP.

In 2018, Austria’s Financial Market Authority (FMA) fined Raiffeisen 2.75 million euros for “inadequate checking of the identity of the beneficial owner and failure to regularly update the necessary documents, data and information required to be able to understand ownership and control structures with regard to high-risk customers in specific individual cases.” But the FMA did not specify which of Raiffeisen’s high-risk customers had been wrongly identified. In December 2019, Austria’s Supreme Administrative Court overturned the fine.

Poroshenko has held a variety of political positions since 1998 — including member of parliament, chairman of the Council of the National Bank of Ukraine, and foreign minister — all while building a business empire and fortune estimated to be worth over $1 billion.

After becoming president following the Euromaidan revolution in late 2013 and early 2014, Poroshenko sought to portray himself as a reformer transforming one of Europe’s most corrupt countries. But he has been criticized for failing to tackle Ukraine’s entrenched oligarchy and — even prior to these revelations — for personal corruption as well.

In response to an emailed request for comment from OCCRP, legal advisers to Poroshenko said he had nothing to do with any of the companies.

“Petro Poroshenko is not and was not a shareholder, UBO or officer of any of the companies,” they said in a response signed, “Group of legal advisers of Petro Poroshenko for the protection of reputation from spreading fake news and biased investigations.”

Zaitsev did not respond to requests for comment, but in a 2016 interview with Interfax Ukraine, he denied owning Intraco Ltd on behalf of Poroshenko. “Put simply, I had, have, and God willing, will have my own business interests and projects, for which I created a number of companies,” he said.

Raiffeisen Bank said in a statement that due diligence performed by banks could only go so far. “Further investigations and searches are reserved exclusively [for] the competent state organs,” the bank said.

“After a thorough internal assessment and after an external inspection/validation by the Financial Market Authority in Austria of business relationships made public in connection with the Panama Papers leaks, we are able to discard the possibility that Raiffeisen Bank International has illegally made false statements about beneficial owners of companies based on the documents made available to us,” the statement continued. 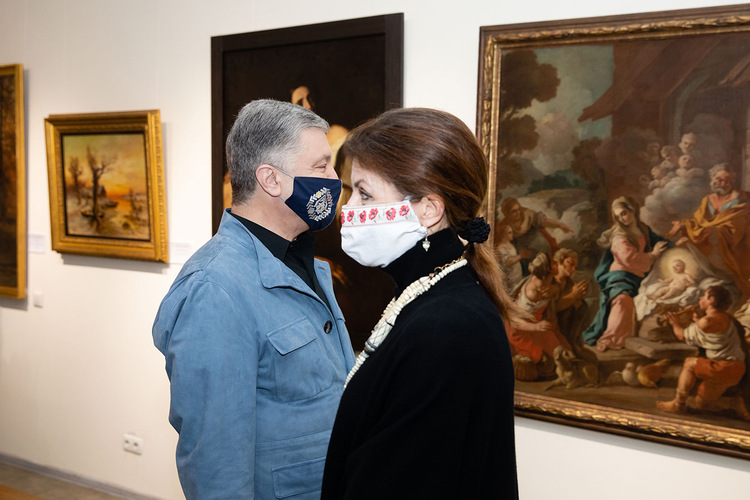 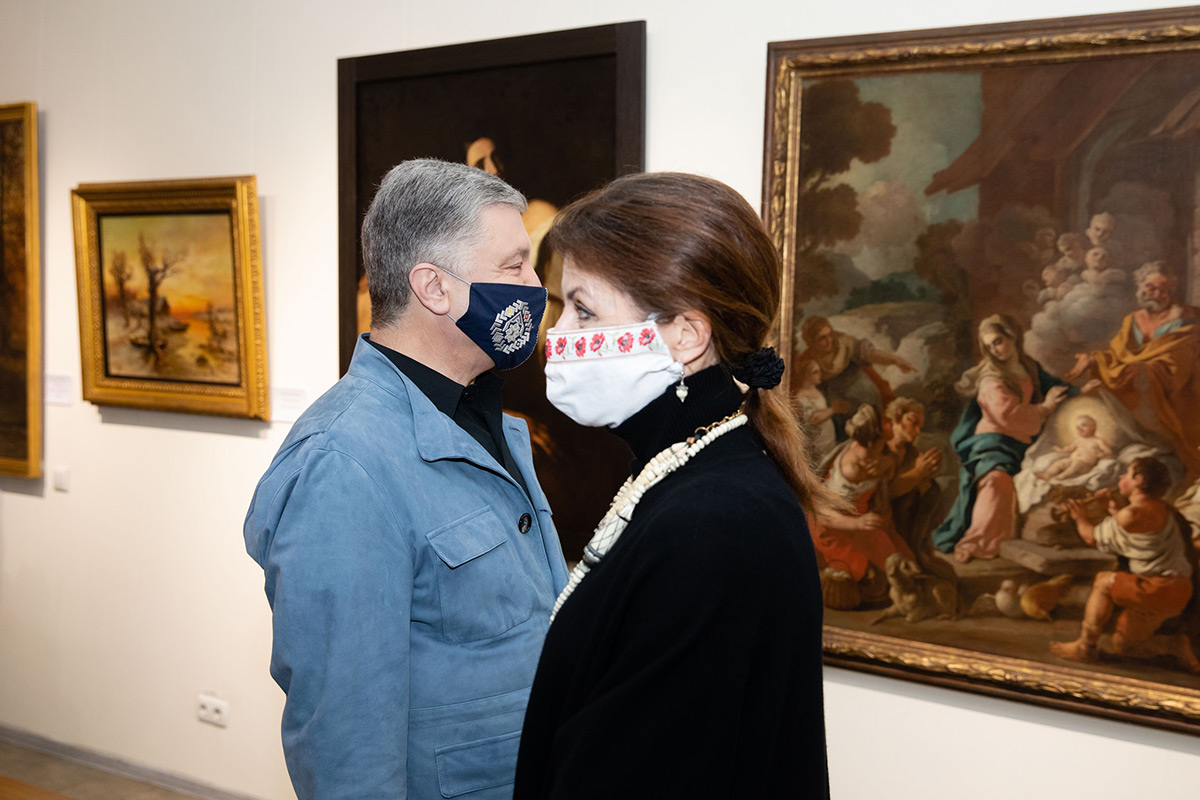 Credit: Facebook/Petro Poroshenko A photo from Poroshenko’s Facebook page of an exhibition of his paintings in May 2020.

Elephant in the Room

In 2017, as part of the Panama Papers investigation, OCCRP linked Poroshenko to Intraco Management Limited, another British Virgin Islands-registered shell firm with an account at Raiffeisen, despite Zaitsev being the declared beneficial owner.

Intraco, Vernon, and 15 other companies that handled tens of millions of dollars in transactions per year tied to Poroshenko and his business empire held accounts at Raiffeisen. Most were registered in the British Virgin Islands and in Cyprus.

In the case of six of these companies, OCCRP was able to establish through email correspondence and other documentation that they were being controlled by Poroshenko personally. The others made transactions related to Poroshenko’s businesses, but OCCRP has not uncovered clear proof that he controlled them.

These dealings were often extravagant. In May 2012 — barely two months after he was named trade and economy minister under Ukraine’s controversial pro-Russian former President Viktor Yanukovych — Poroshenko bought a surrealist sculpture of a long-legged elephant by Salvador Dali for $338,500 at an auction at Sotheby’s in New York using an offshore company called Linquist Ltd.

Raiffeisen listed Zaitsev as Linquist’s beneficial owner. According to documents obtained by OCCRP, Poroshenko held a power of attorney for Linquist, which later sold the statue to one of Poroshenko’s Ukrainian media companies for $342,500.

By April 2013, having quit as Ukraine’s minister of economy, Poroshenko went even further, using Vernon to buy 4.8 million pounds’ worth of art. These pieces, mostly by Russian masters, included the classic Ilya Repin painting Cossacks on the Black Sea. 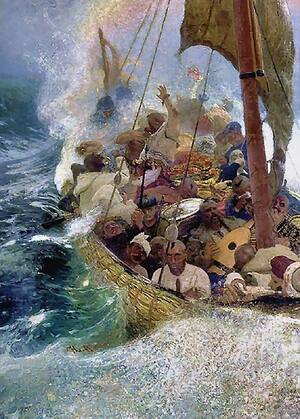 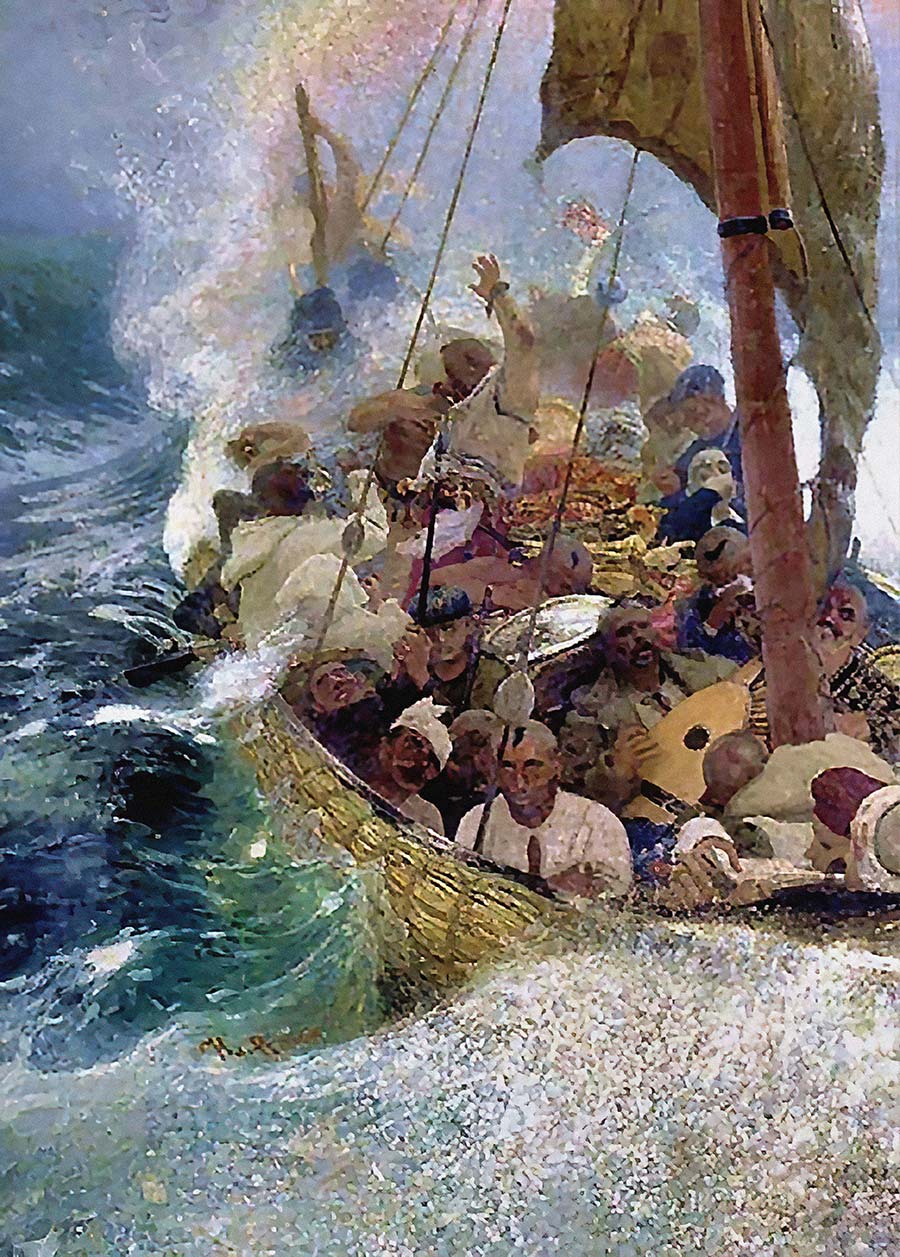 Credit: Artepics / Alamy Stock Photo Ilya Repin’s Cossacks on the Black Sea, one of the works purchased by Poroshenko through an offshore shell company.

The company later transferred legal ownership of this artwork to Poroshenko on the premises of the Honorary Consulate of the Seychelles in Kyiv — which also happened to be inside the headquarters of one of Poroshenko’s businesses. The Seychelles consul at the time, Oleh Gladkovsky, was Poroshenko’s friend and business partner. The Ukrainian State Bureau of Investigations placed an injunction on the art collection last year, forbidding it from being sold or removed from Ukraine, after saying it had been brought into the country illegally, without paying customs duties.

Email correspondence and other documents obtained by OCCRP also show that Poroshenko made executive decisions on behalf of Vernon, Linquist, and the Cyprus firm Chartomena Ltd.

Emails written by Volodymyr Demchyshyn, an investment banker who in 2014 became energy minister in Poroshenko’s administration, make it clear that Demchysyn consulted with Poroshenko about deals using Chartomena and Proktoremo connected to Poroshenko’s shipyards in Kyiv and Crimea. In June 2013, Poroshenko ordered Demchyshyn to draw up a contract for Chartomena to buy up a debt owned by his Crimea-based Sevastopol Shipyard. In December 2013, on Poroshenko’s instructions, Demchyshyn arranged for Proktoremo to transfer a plot of land from Poroshenko’s Kyiv shipyard to a new structure to be developed into a leisure complex.

Demchyshyn also organized another Poroshenko deal in 2013: The sale of his minority stake in an influential Ukrainian media group, UMH, to Boris Lozhkin, the majority shareholder who later became Poroshenko’s chief of staff. Lozhkin then sold the entire company to Sergiy Kurchenko, a notorious frontman for Viktor Yanukovych. Again, the lawyers consulted directly with Poroshenko on the deal, which was structured using Linquist — owned on paper by Zaitsev.

In 2013, Ukrainian investment banker Igor Mazepa wrote directly to Poroshenko to offer his personal guarantee for a Linquist loan, once again indicating that the offshore company was controlled by Poroshenko. 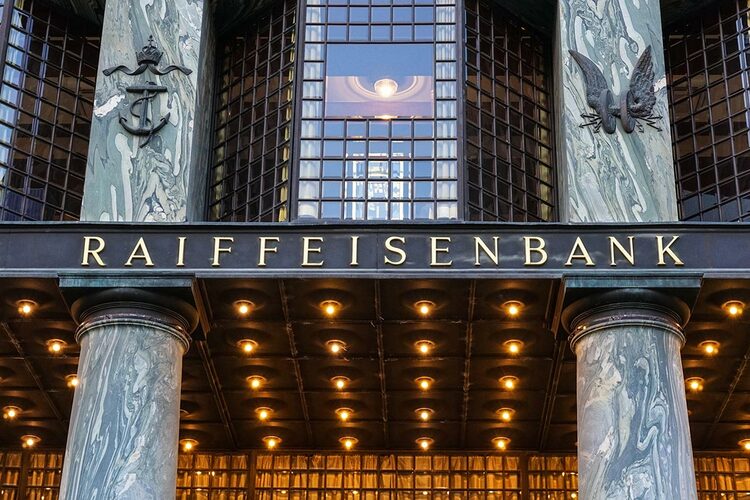 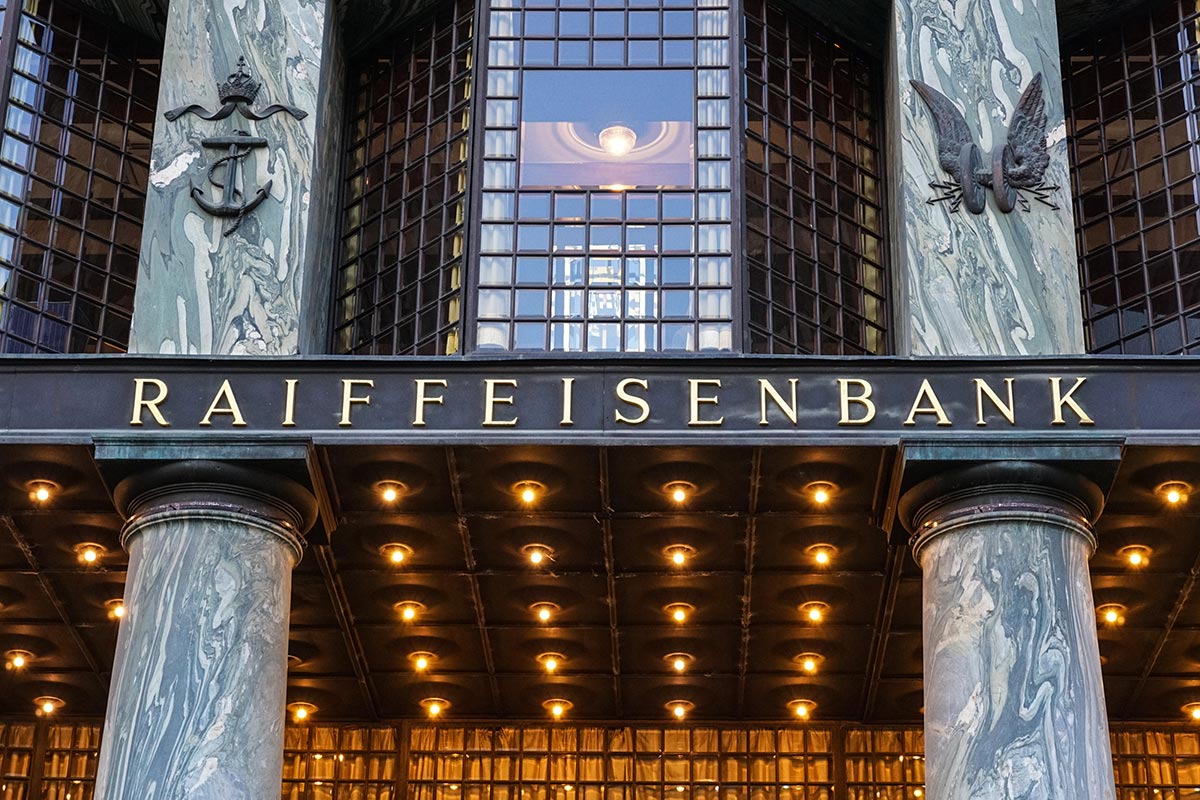 Finally, spreadsheets from the offshores’ financial records show that the firms were interlinked by debt agreements used to shuffle funds around. In May 2014, around the time Poroshenko became president, for instance, Chartomena loaned $21,650,200 to another one of the firms, Manoushag. Shortly after, Manoushag loaned $10 million to yet another of these firms, Proktoremo.

Martin Woods, managing director of the consulting firm AML Woods and an expert on financial crime, said that while a bank “should defend client privacy robustly, it should never accommodate client secrecy.”

In cases involving so-called “politically exposed persons,” a term which generally includes officials with prominent public functions, “secrecy can literally cost lives when governments, as a result, lack the resources to fund health and public services,” he said.