Russia’s invasion of Ukraine has attracted condemnation, sanctions, and unprecedented media attention on some of the most powerful figures inside Vladimir Putin’s regime. Among them is the man known as “Putin’s chef,” Yevgeny Prigozhin, a businessman and caterer who in September finally admitted to founding the notorious Wagner Group of mercenaries, which deploys to war zones around the world, often fighting for factions allied with the Russian government. Company employees have been accused of murder and war crimes in operations in Africa, Syria, and Ukraine. 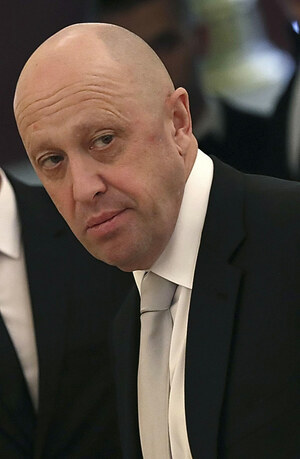 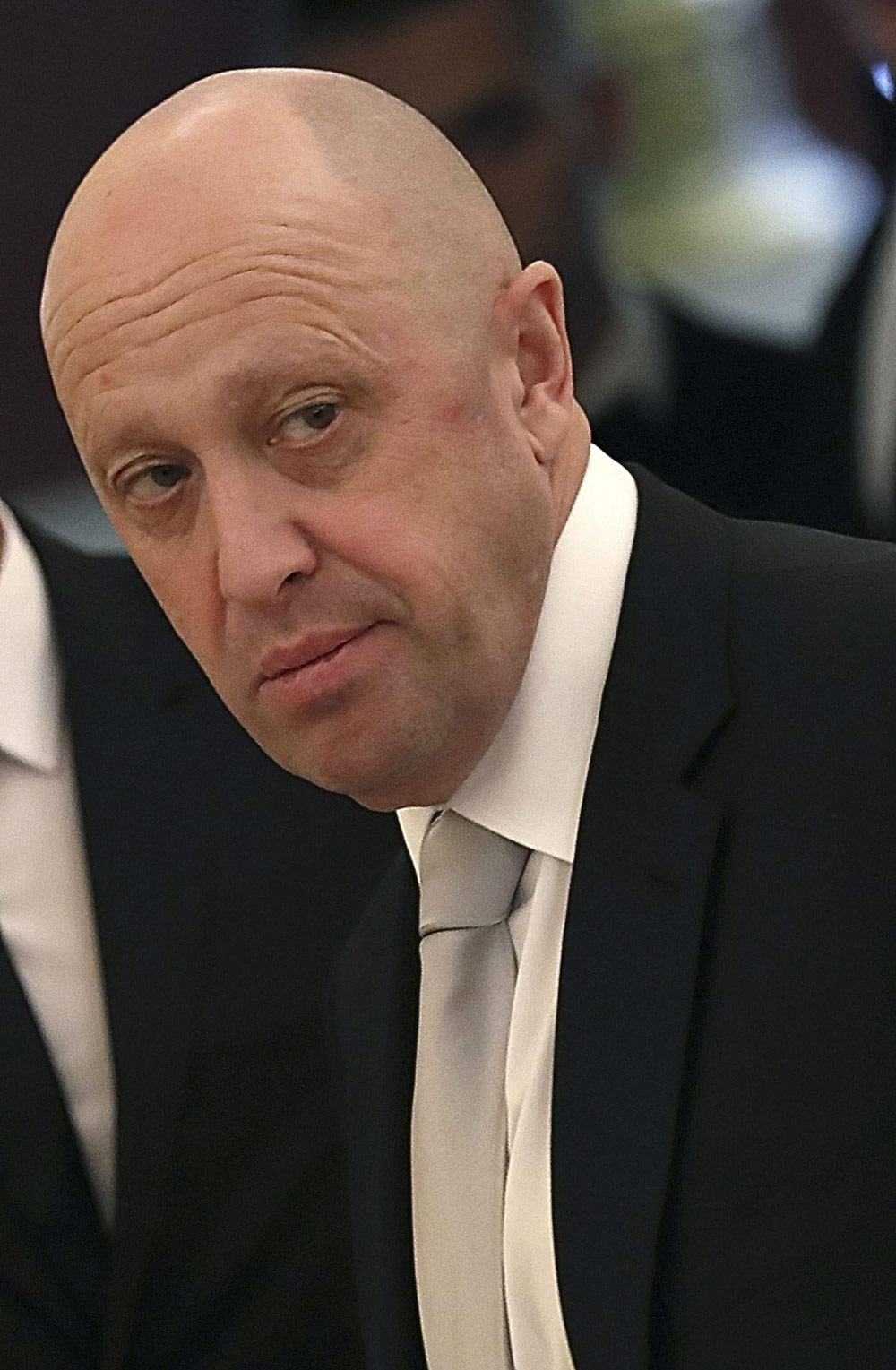 Multiple media reports over the past few years have exposed the role of Meroe Gold Limited, a Sudanese company within the Wagner network, and examined how Wagner appears to be giving support and advice to Sudan’s brutal dictatorship in order to access gold. Now, OCCRP, working in partnership with Le Monde, has obtained leaked documents, including contracts, letters, and internal memos, that provide new details of how Meroe’s parent company M Invest — which is owned by Prigozhin — paid millions of dollars to a company operated by Sudanese military intelligence. In exchange, it obtained access to residence permits and weapons for its Russian personnel. Meroe also appears to have received special treatment from the Sudanese presidency, according to leaked correspondence.

M Invest’s deal with Sudan’s military is especially problematic because the army is known for being “deeply and systemically corrupt,” as well as a major conduit for illegal weapons, said Andrew Feinstein, an anti-corruption expert and author of “The Shadow World: Inside the Global Arms Trade.”

“M Invest is effectively utilizing a criminal military to conduct its criminal activities,” he said.

Richard Messick, a former senior operations specialist at the World Bank who now consults for international organizations on legal development and anticorruption, said Wagner and the Sudanese military were “two of the blackest of the black figures in the world economy.”

“The question is how these transactions [between Wagner and Sudanese military companies] are being conducted,” said Messick. “These are two really bad actors that shouldn’t be allowed to purchase arms, anywhere. If the payment is in gold, it needs to be shut down. If it’s through the international financial system, sanctioning authorities must make sure the companies and individuals associated with them cannot hold any [bank] account.”

Prigozhin repeatedly denied having any connection to Meroe, or indeed Wagner. Over several years, he even sued media outlets that claimed Wagner belonged to him. Not until September did Prigozhin admit he had founded the company — not long after videos of him recruiting Russian prisoners to fight with Wagner in Ukraine appeared online.

Although he has not publicly acknowledged that he owns Meroe, the company was sanctioned by the U.S. in July 2020 for its ties to him. The Treasury Department said Meroe was owned by a company called M Invest that was owned or controlled by Prigozhin. M Invest provided a cover for Wagner operations inside Sudan while obtaining gold mining licenses, the U.S. said.

Mikhail Potepkin, who leads Meroe in Sudan, declined to respond to questions from OCCRP. Emails to Meroe bounced back.

Emails to Sudan’s Ministry of Defense and Ministry of Energy seeking comment bounced back because their inboxes were full, and none of the listed phone numbers for either ministry would connect. Aswar could not be reached for comment.

Meroe Gold was set up in Sudan in summer 2017, at a time when Russia and Sudan were strengthening ties and signing cooperation agreements in several sectors, including mining. Sudan’s then-president, Omar Hassan Ahmad al-Bashir, visited Russia in November 2017, and since then signs of Russia’s presence in Sudan have proliferated. Photos and videos of Russians in military uniforms training Sudanese soldiers appeared online, followed by media reports that Wagner was operating in Sudan.

Not long after it was set up, Meroe’s parent company struck a five-year deal with a military-linked security firm based in Khartoum, agreeing to pay huge sums of money in exchange for its help bringing M Invest personnel into the country, and for “security and safety” services. 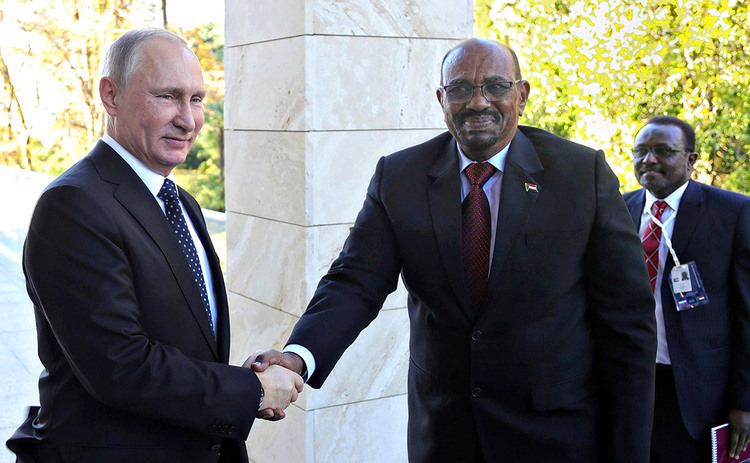 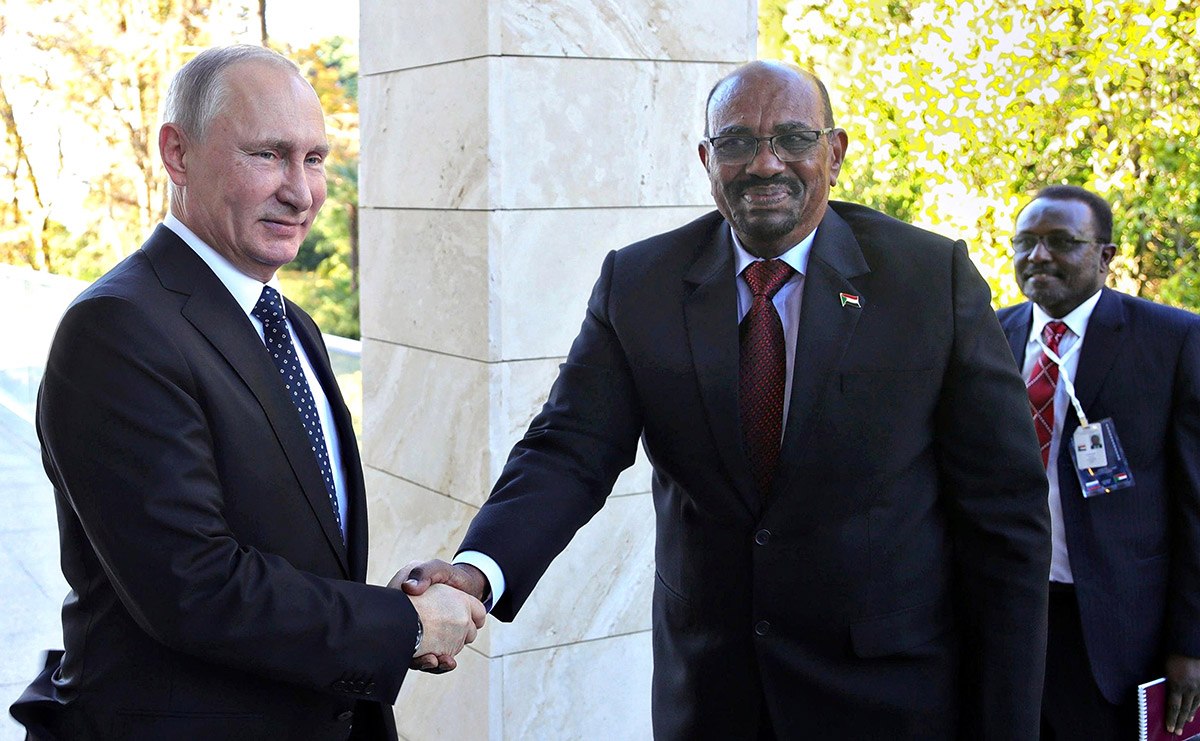 In exchange for providing protection, immigration assistance, and import services to M Invest and Meroe staff operating in Sudan, Aswar was to receive $100,000 each month, as well as $200,000 up front in “goodwill fees,” according to a copy of their contract that was shared with OCCRP by the U.K.-based Dossier Center — an organization backed by exiled Putin critic Mikhail Khodorkovsky — as well as local sources. M Invest also agreed to pay all related taxes and fees Aswar owed to the government, as well as the salaries of Aswar’s staff. On top of all this, M Invest would also pay Aswar $500 for every one of its personnel that the company helped bring into Sudan.

It also obliged Aswar to “provide the necessary weapons and equipment needed by both parties through the Sudanese Ministry of Defense.” An annex to the contract indicated Aswar would provide armored vehicles, large-caliber weapons, drones, and communications equipment, but it did not specify how many weapons would be needed, or where they would come from. Aswar would store, transfer, and clear the weapons through ports and airports.

Documents show that Aswar worked with Al-Riyadah, a local aviation company subcontracted by Meroe, to provide transport between Khartoum and Central African Republic, where Wagner also has a significant presence. In at least some cases, the flights were made on a Russian-made Antonov AN-26 airplane registered to the Sudanese military.

"Prigozhin is paying a private military company controlled by the government in exchange for the right to outsource sovereign privileges, including weapons, passage for his men and use of the ports and air bases."
– Andrew Feinstein, expert on arms trafficking

A 2018 letter from Potepkin to the head of Sudan’s intelligence authority suggests that, thanks to Aswar, planes hired by Meroe were also able to fly under a military signal code, meaning their air transport would not have been recorded on commercial flight tracking systems. Potepkin refers to a previous agreement between Aswar and the Air Force that he said should grant Meroe permission to land on a military base in Khartoum and to use “the signal code of the air force for the purpose of operating internally and externally.”

Feinstein said the contract with Aswar showed that Prigozhin’s companies were deeply enmeshed with the Sudanese military.

“It tells us that Prigozhin is paying a private military company controlled by the government in exchange for the right to outsource sovereign privileges, including weapons, passage for his men and use of the ports and air bases.”

The Aswar agreement persisted even after Bashir was forced from office in a 2019 military coup. An official Aswar memo from May 2019 — a month after Bashir was ousted — says a “sergeant” accompanied a Russian delegation from Meroe as it traveled from Khartoum to the Nile region, the site of a Meroe factory.

In Sudan, foreign companies with mining exploration licenses are required to set up a production company to exploit any resources after discovery. The Ministry of Minerals is granted 30 percent of the shares of these companies under Sudanese law.

But in August 2018, Bashir’s office granted a striking favor to Meroe: It ordered the ministry to waive its take in a future gold operation to the Russian-owned company.

Less than two months after the presidency’s instructions, the undersecretary of the Ministry of Minerals granted Meroe additional lucrative mining and gold waste processing licenses in three gold-producing regions, again waiving its 30 percent. The company was also granted exploration rights for another potential gold reserve.

“Any time you deviate from established foreign investment law, you have to ask if it’s because the foreign investor is so attractive the government is desperate to bring them in, or whether there is a cloud over such a special deal which may be a side payment or some other quid pro quo, like the ability to procure arms for the people in power,” he said. 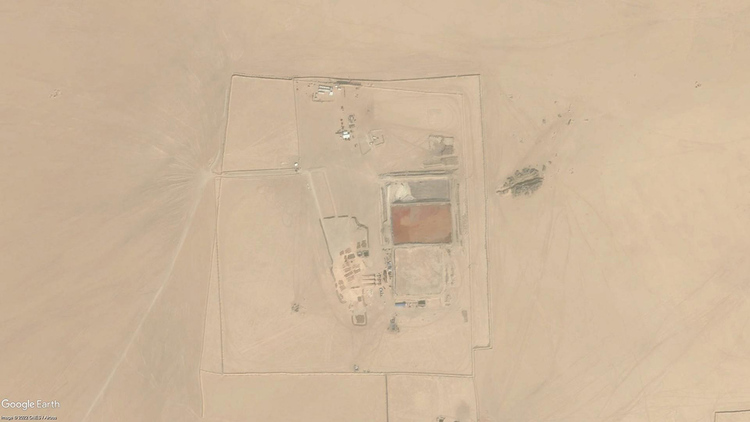 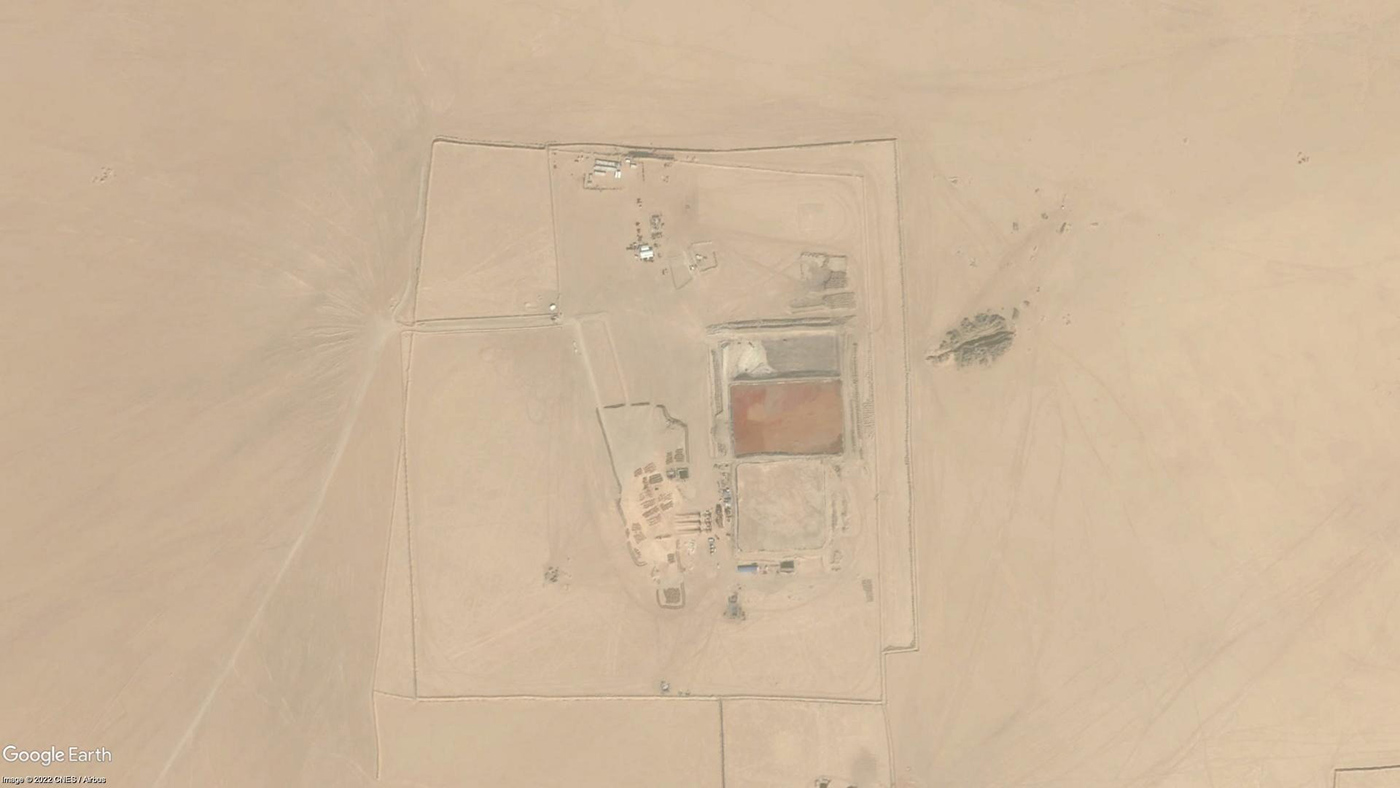 The legal department within Sudan’s Ministry of Minerals took issue with the waiver in at least one case, according to internal documents obtained by OCCRP,, pointing out that the waiver could not be made since the licenses had not yet been granted and no production company had been set up. Just over a month later, however, the ministry was ordered to issue the waiver, which it did in late December 2018.

Official documents setting out an exchange between Meroe and Sudan’s Ministry of Minerals reveal that the state’s stake in the first of these gold processing licenses would first pass into the hands of Sudan Mineral Trading (SMT), a company owned by the Sudanese military, before eventually being given to Meroe.

It appears as though SMT and Meroe operated as partners in the new processing license. But progress was not quick: In an official letter to the Ministry of Minerals in early 2020, well after Bashir was arrested by the army and forced out of power, Potepkin indicated the arrangement had not yet been finalized. SMT, he said, was still obliged to eventually pass the waiver of the government’s 30 percent stake on to Meroe’s owners. It is unclear if that has happened.

Partnering with SMT on gold licenses was likely a tactic to win over support for Meroe’s operations among Sudan’s powerful military, said arms trade author Feinstein.

“Meroe is repeating a long-standing practice of using military ‘incentives’ to be able to exploit mineral rights,” he told OCCRP.

By the end of 2020 scrutiny on Meroe had become intense, especially after it was sanctioned by the U.S. Bashir, in power when Meroe was set up, was by now facing trial for his role in the coup that had propelled him to power in Sudan.

In this more challenging context, the company handed its mining waste treatment facility over to a brand-new company called Al Sawlaj for Mining Ltd, which has no assets and lists just one employee — a former Meroe Gold manager — and one substantial shareholder. Well-placed sources close to the Sudanese government told OCCRP that Al Sawlaj is merely a new front for Meroe’s owners.