When COVID-19 struck Kyrgyzstan, the government announced a moratorium on loan payments to help struggling citizens survive despite their lost income.

A few days later, another delay was announced — this one not to the public’s benefit.

Along with a five-month extension of tax return deadlines for all citizens, public officials and state employees were allowed the same delay on their requirement to file asset declarations. These statements, normally filed each year, list the incomes and assets of the country’s officials and their immediate families, as a way to ensure transparency and fight corruption.

About a week later, a legislative change extended this deadline again.

As a result, asset declarations covering both 2019 and 2020 will only be published in November 2021.

The information gap comes at a particularly dramatic time in the country’s political life. Amid allegations of vote buying and other violations, citizens rejected the results of the last elections, held in October 2020, and took to the streets. The results were annulled, the government was toppled, and a populist politician freed from prison during the uprising was installed as acting prime minister. This man, Sadyr Japarov, became president in January.

The next set of elections — a local vote on April 11 and parliamentary election sometime later this year — will be the public’s first opportunity to have their say since that tumultuous time. But without asset declarations, it will be impossible to scrutinize any former or current officials who run for office over possible illicit enrichment, questionable assets or businesses, or other irregularities.

“There is not even minimal information that could somehow help us, the public and journalists,” says Elizaveta Umurzakova, a reporter who covered the issue in her former role as deputy editor of Economist.kg. “We were deprived even of this crumb.”

Kyrgyzstan is the only Central Asian country that makes some of the information filed on officials’ asset declaration forms public. But the current delays are only the latest problem in a system that has been crumbling for years.

OCCRP and Kloop have reviewed more than 1,000 declarations filed between 2010 and 2018 by high-ranking officials and members of parliament, and noticed a pattern: The already-minimal information made publicly available has shrunk in both quantity and quality. Moreover, weak oversight and selective enforcement have allowed the anti-corruption tool to become little more than a formality.

“Our officials are naked as falcons,” says Aigul Akmatzhanova, the head of the local chapter of Transparency International. “Sometimes you look at the declarations and you laugh — some of them don’t even have apartments.”

🔗Where the System Works

In Ukraine, a country with its own severe corruption problem, asset and income declarations have been a key tool for holding officials accountable. The system, introduced in the wake of demands by civil society and international institutions after 2014’s Euromaidan revolution, makes extensive information about Ukrainian officials available to the public — in sharp contrast to Kyrgyzstan.

“What is the declaration system for? First of all, so citizens can monitor how politicians who represent them are carrying out their duties and whether they’re abusing this power,” said Anton Marchuk, a specialist at Ukraine’s Anti-Corruption Action Centre.

The presidential administration, the prime minister’s office, and the tax service were all contacted for comment but did not respond.

The declarations system, which has been in place since 2005, has one glaring limitation: Though the forms include 16 pages of information, only the general summary page is made public.

Over the past decade, the format of this summary has changed several times. Some data has been lost, while other information has become more difficult to interpret.

Between 2012 and 2014, the summaries distinguished between real estate and other assets, but stopped listing their value and dates of acquisition. It also no longer listed loans and debts.

Some additional information about significant spending appeared in 2015 and 2016, but the most recent version of the summary page, introduced in 2017, no longer distinguishes between various sources of income. Also, because the measurement for declared properties now lists either “square meters” or “hectare” as possible units, the size is left unclear if the declarant does not specify it. 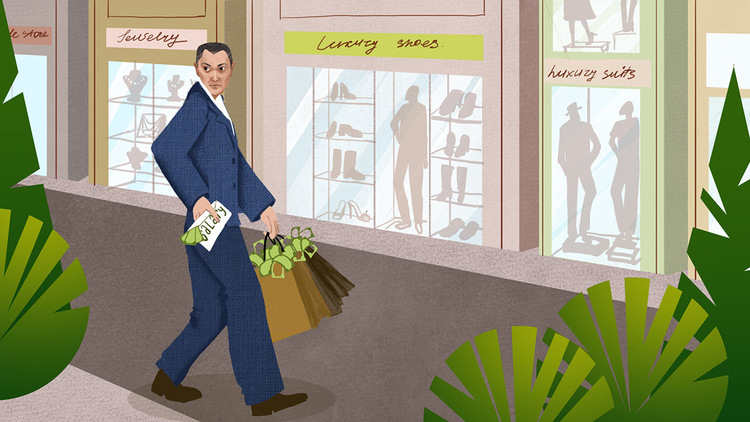 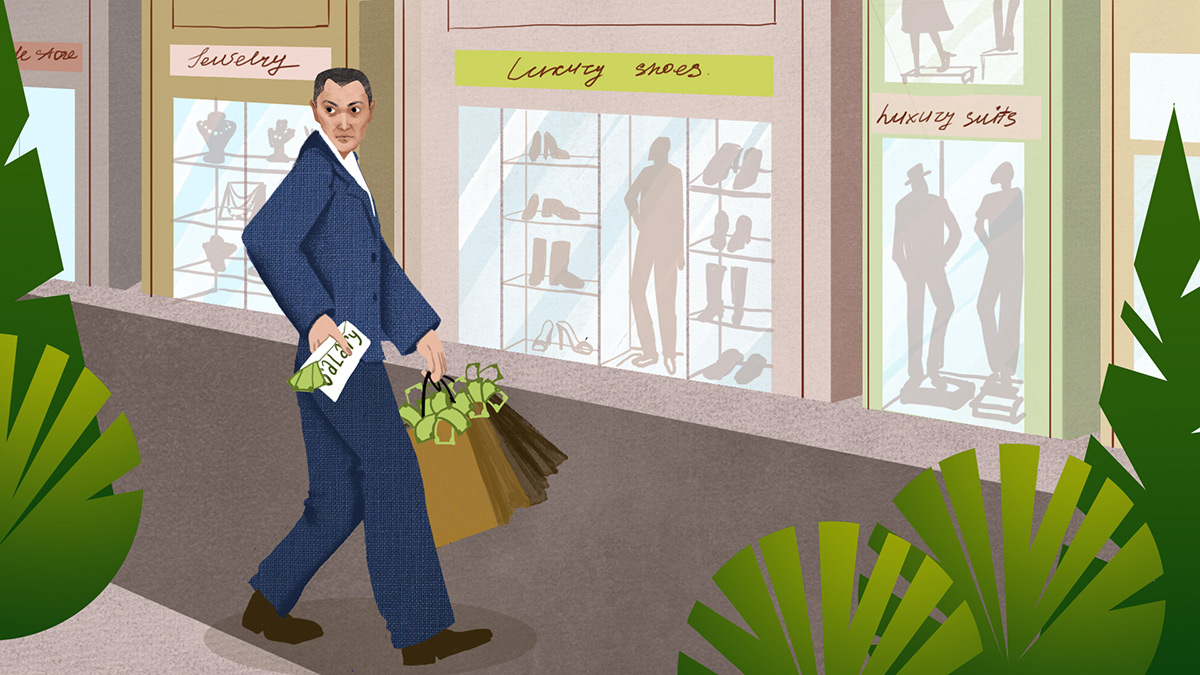 Credit: Alina Pechenkina Ishak Pirmatov, a member of parliament, declared a massive $390,000 of spending on unknown items in 2017. The origin of the money is impossible to identify, as his declared income of about $20,000 per year remained almost unchanged between 2016 and 2018.

One might expect employees of the State Tax Service, the institution charged with reviewing officials’ declarations, to delve into the details. In fact, according to two tax service employees interviewed by OCCRP, only the summary pages of the 16-page declarations are reviewed on the initial pass.

“In order for tax service employees not to [have to] look at every page, there is a summary,” said Erkin Sazykov, the press secretary of the tax service. “All the data is taken from there.”

Moreover, though the value of properties is indicated on the form, it is provided by the registrants themselves and is not verified independently. Nor do tax service employees verify whether the officials have property or bank accounts abroad. Tax service employees also said that they have no authority to investigate assets belonging to a filer’s immediate family, even though they appear in the declarations. Assets being held by family are a typical way for Kyrgyz officials to park their money. 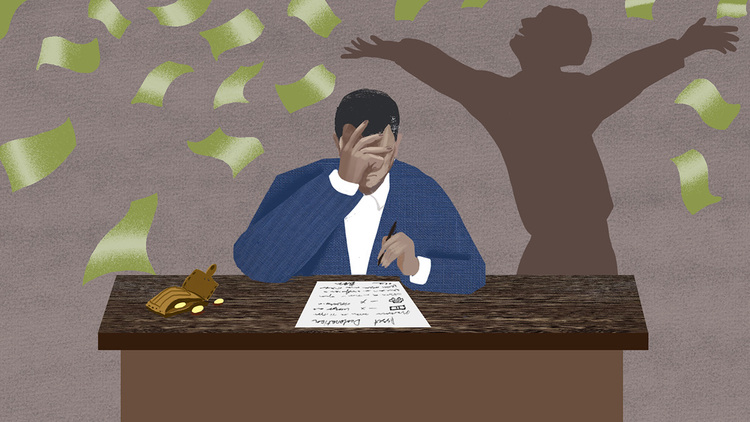 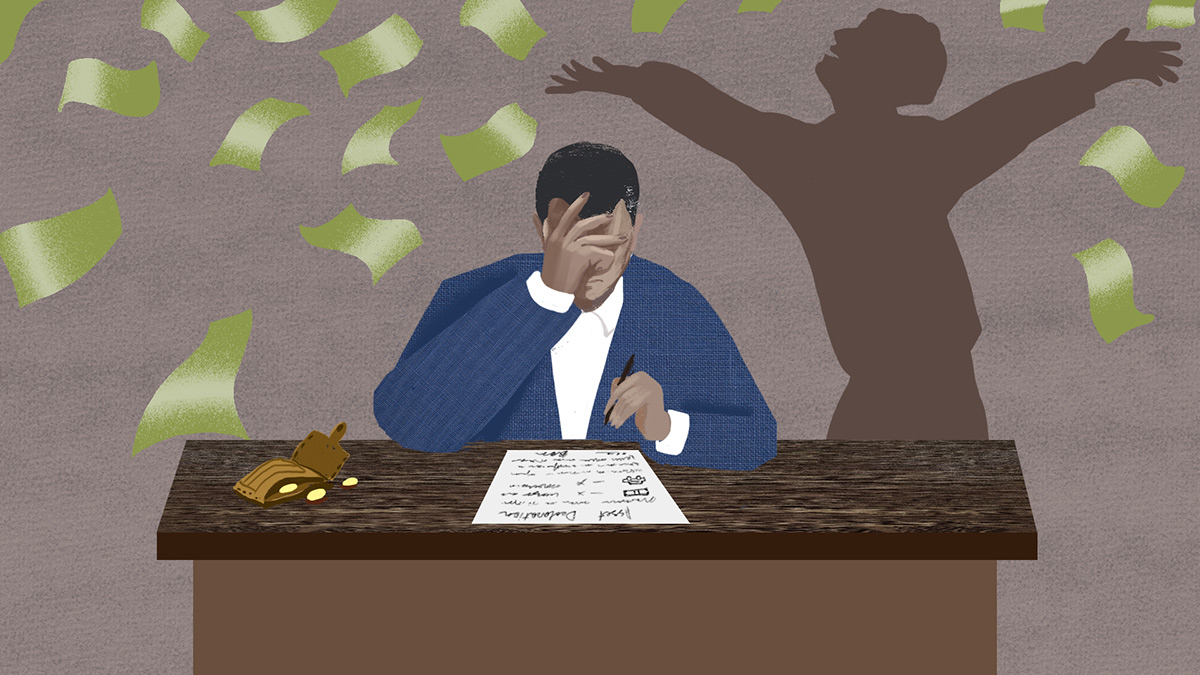 Credit: Alina Pechenkina Registering income or assets with close family members is a typical way for Kyrgyz officials to deflect attention. Such cases are not usually investigated.

Finally, tax service employees don’t compare the most recent declarations with those filed in previous years.

“And what for?” said Akylbek Mamyrov, the head of the authority’s Department of Declaration of Taxes and Payments, when questioned about such weak oversight.

After reporters pressed for further answers and filed several freedom of information requests, the tax service changed its position. Nazbek Satynbekov, Mamyrov’s subordinate who is responsible for declarations, said in a subsequent interview that all 16 pages of each declaration are checked.

Another, separate problem is selective enforcement.

This is illustrated by the case of Kubanychbek Jumaliyev, a member of parliament whose declarations had glaring omissions. Though he listed his income, some properties, and a car, he neglected to mention 45 companies in which he or his wife were registered as owners or co-owners.

These lapses were reported in 2019 by Umurzakova, who was then at Economist.kg. She discovered the companies in Kyrgyzstan’s business registry and compared them with Jumaliyev’s declarations, to identify the gap. 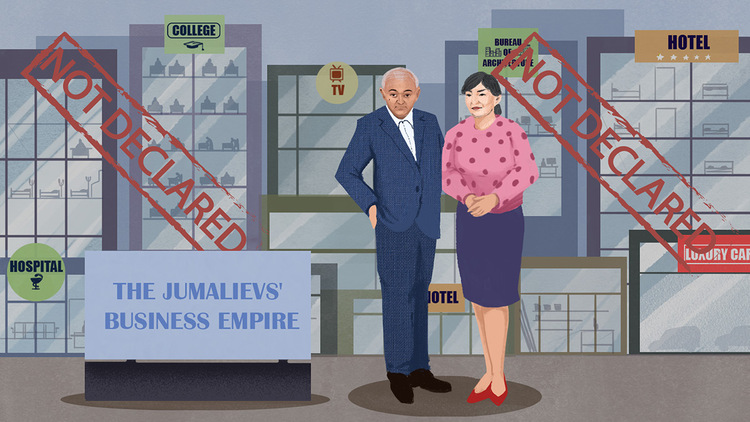 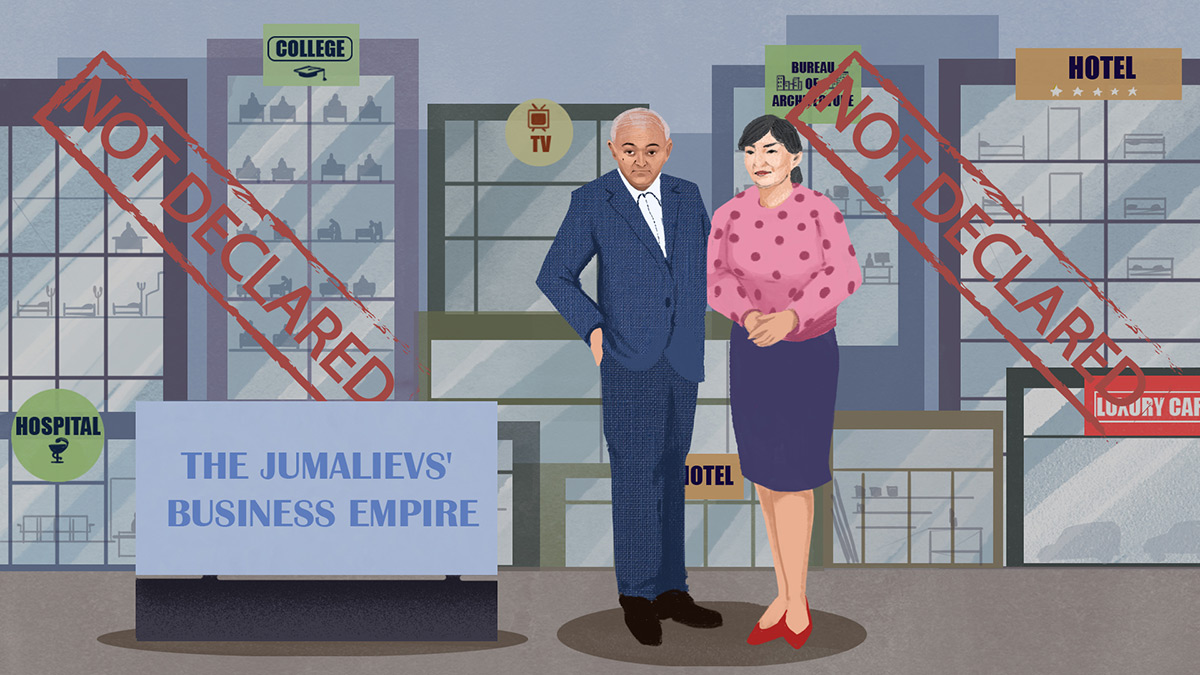 Credit: Alina Pechenkina Kubanychbek Jumaliyev left 45 companies he and his wife owned or co-owned off of his asset declarations.

The tax service insisted to OCCRP that it had also caught this breach and referred the issue to the prosecutor general’s office. However, it wasn’t until after Economist.kg published its findings that officials looked into the matter. The financial police investigated Jumaliyev for “illegal enrichment” and “illegal participation as an official in business,” but the authority has since been dismantled and the current status of the case is unclear. (In early February, Jumaliyev was arrested on unrelated abuse-of-power charges. He did not respond to requests for comment.)

Jumaliyev is not the only member of parliament who provided incomplete information. In 2019, the tax service said it referred 79 cases to the prosecutor general — representing nearly two thirds of all legislators — after reviewing declarations filed the previous year. However, no individuals have been sanctioned for these breaches, and the tax service has not released their names despite a law requiring their publication.

Enforcement looks very different for regular state employees. Of about 58,000 such employees who filed declarations in 2019, more than 3,000 were sanctioned, according to the prosecutor general. 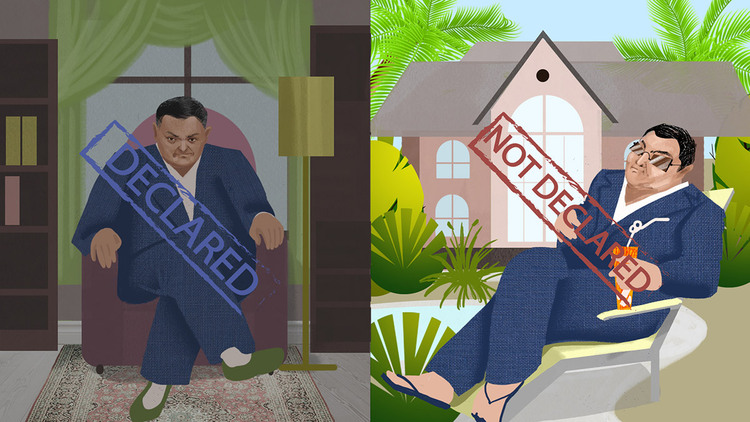 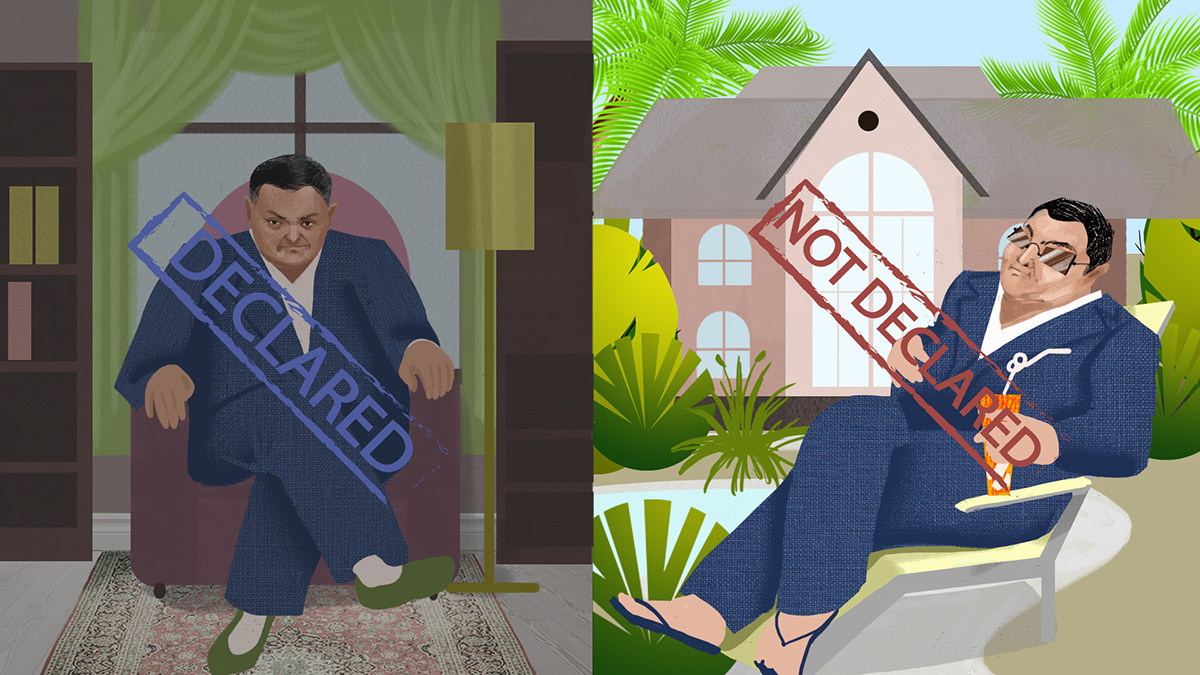 Credit: Alina Pechenkina In 2018, member of parliament Kamchybek Zholdoshbayev declared owning a modest apartment. He must have forgotten to list a vast mansion, with palm trees and a swimming pool, which he owned through a company. He did not respond to requests for comment.

In 2018, 41 former and current members of parliament, as well as Kyrgyzstan’s former president, declared a total of almost US$3.2 million worth of livestock. One problem with this type of asset is that the existence of animals is difficult to track or verify, and it is puzzling that many of these officials own no countryside homes or land, and none own farms. Moreover, the precise number of animals is not declared, only their value — and these figures are submitted by the officials themselves.

These ambiguities make it possible for this difficult-to-trace asset to be used to launder assets that, in fact, could have originated elsewhere.

In one case, member of parliament Akylbek Zhamangulov’s declarations showed steadily declining income between 2015 and 2018, but in 2017 — his last full year in public office — he unexpectedly declared livestock valued at 17 times more than his entire income that year. 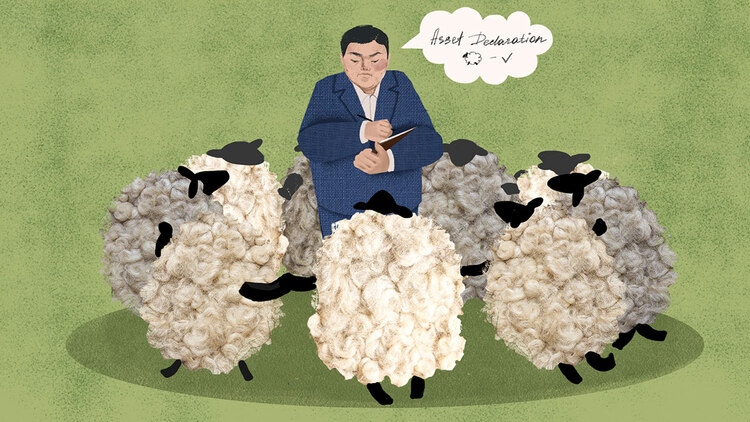 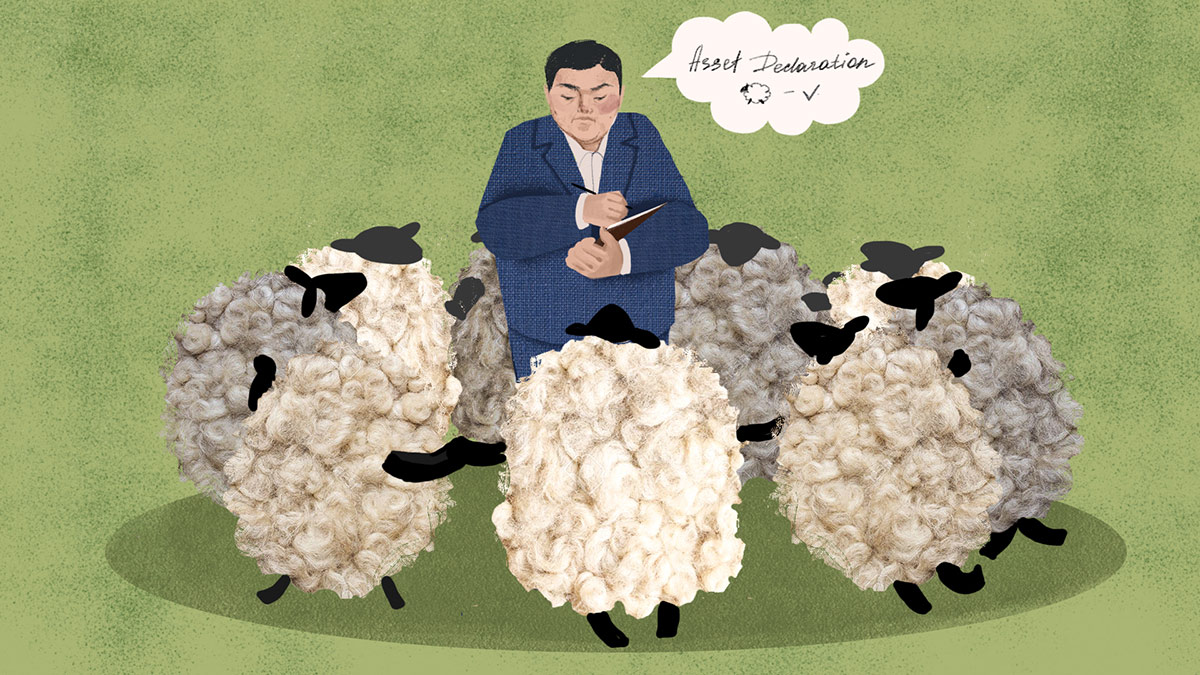 Credit: Alina Pechenkina Livestock are a challenging asset to track, and many members of parliament declare valuable herds that are difficult to square with their living situations.

In Brazil, another country where agriculture is an economic staple in some regions, there were so many cases of corruption, money laundering, and fraud through livestock that the government imposed anti-money-laundering rules on the industry in 2012. There are no such provisions in Kyrgyzstan.

Dário Cardoso, a consultant at Transparency International Brazil’s Social and Environmental Integrity Program, explained that the tactic of hiding money in livestock has been used by influential politicians. It has also been detected in multiple drug trafficking and illegal farming cases, he said.

The government knows the system is broken.

In June 2020, new legislation proposing changes was introduced in parliament, citing concerns of “political and systemic corruption” and “disproportionate expenditures of state and municipal employees to their income.”

With striking honesty, the proposal essentially confirmed that government employees often attempt to conceal illegal enrichment, and avoid taxes, by putting their assets in the names of relatives or other proxies. It also credited journalists with exposing the real property assets owned, used, and sold by public servants.

However, it is unclear whether the proposal will move forward following the uprising and government upheaval. Some transparency advocates are pessimistic about the prospect of meaningful change, even if the new parliament takes up the now-defunct legislative proposal. 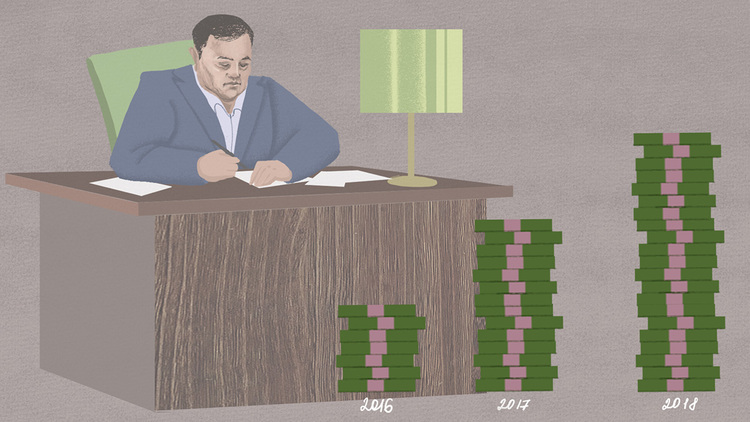 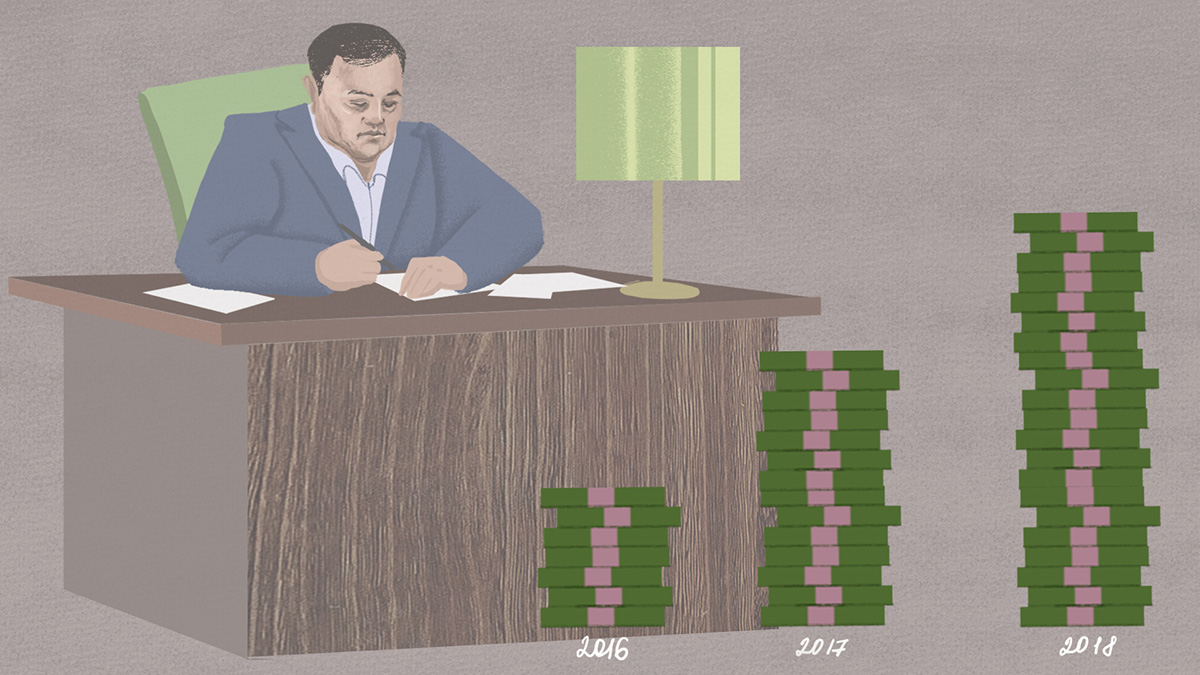 Credit: Alina Pechenkina According to his asset declarations, Tilek Matraimov, the former head of the southern district of Kara-Suu, inexplicably quadrupled his income between 2016 and 2017. The following year, his income grew by another 50 percent. His brother, Raimbek Matraimov, a former customs official investigated by OCCRP, Kloop and RFERL, pleaded guilty to corruption in February. (Tilek Matraimov did not respond to a request for comment.)
Tweet this Share this on Facebook