In April 2018, a group of officers from Russia’s Presidential Security Service landed at Munich International Airport.

They remained in Munich for a month, staying at four different hotels, including the four-star Hotel an Der Oper near the Munich National Theater. The group was reinforced by additional arrivals from Moscow until they numbered 12. In mid-May, having completed their mission, the last of the officers flew back to Russia.

Russian President Vladimir Putin was nowhere near Germany at the time. So what could explain this mass influx of Russian security officials?

As it turns out, the presidential security service was in Munich to protect someone else: One of Putin’s daughters.

Just as the men arrived, a luxury Gulfstream G650 business jet also landed in the city. On the same day they departed, a month later, the same jet flew back to Moscow. On board was the infant child of Katerina Tikhonova, the name used by Putin’s daughter — and presumably Tikhonova herself. 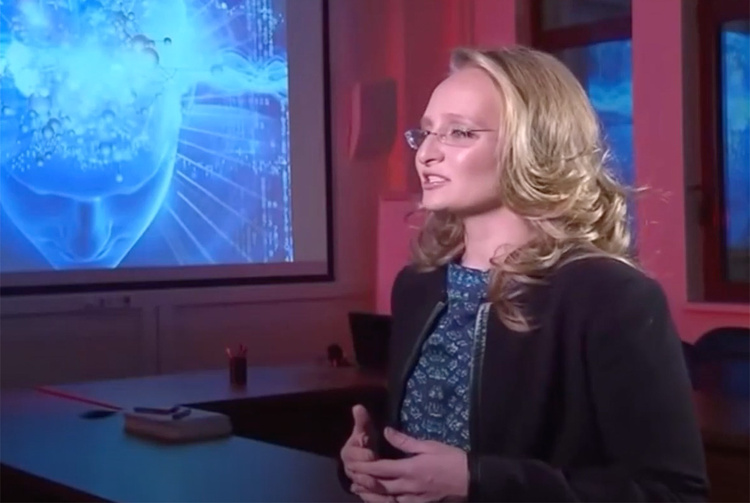 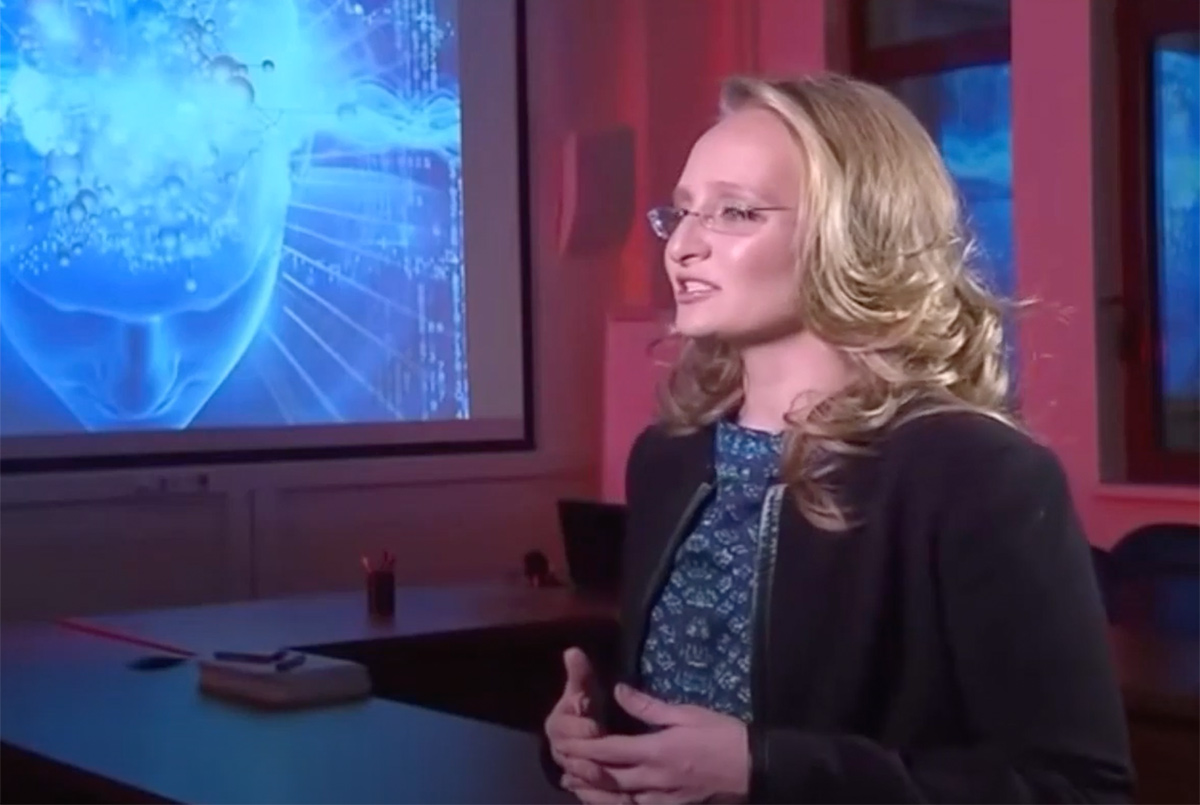 Credit: Russia 24 A screenshot from an interview Tikhonova gave to the Russian state channel Russia 24. She is identified as the head of Innopraktika, a research foundation connected to Moscow State University.

Details of her travels, and the travels of the officers who accompanied her, are known thanks to emails leaked from the inbox of Alexei Skripchak, one of the bodyguards assigned to Tikhonova.

The emails were provided by the same anonymous source who sent reporters emails from Putin’s former son-in-law Kirill Shamalov two years ago. The identity and motivations of the source are unknown.

This email archive contains hotel reservations for Tikhonova and her guards, passport copies, and other documents. Along with flight passenger data obtained by reporters, this information shows that more than 90 bookings for hundreds of hotel rooms for trips to Germany and other foreign destinations were made between 2016 and 2020. Aside from Munich, she traveled to Sweden, Milan, London, and even Dubai.

This joint investigation by OCCRP’s Russian partner, IStories, in collaboration with the German magazine Der Spiegel, shows how Vladimir Putin’s daughter — whose identity he does not even publicly acknowledge — has appeared to use state resources as her own.

Among these was the plane she used, which belonged to a state company from 2018. And though the documents don’t indicate how the trips were paid for, at least the salaries of the security officers — usually between seven and ten men at a time — were paid out of the state budget. This is despite the fact that, according to Russian law, members of the president’s family should be protected by his bodyguards only when they are living or traveling with him.

“It would be completely unethical, in terms of the funds that are used, for the payment of the official’s daughter … [and] for the bodyguards to be staying with her,” he said. “That would obviously require a disbursement of public funds.”

These travels took place before Russia’s recent invasion of Ukraine and subsequent sanctions. But they show that the president’s daughter spent considerable time in Europe even as top Russian officials thundered against the decadence of the West. In 2020, one of the country’s most influential security officials, Security Council Secretary Nikolai Patrushev, decried the “individualism, selfishness, cult of pleasure, [and] unbridled consumption” in the West. More recently, Putin himself denounced Russian who “are located [in the West] mentally” as national traitors.

At the time Putin made those remarks in March 2022, a Russian man named Igor Zelensky was still working as head of the Bavarian State Ballet — which performs in the National Theater, just steps from the hotel used by Tikhonova’s guards. He was the reason for Tikhonova’s travels to Munich: As IStories and Der Spiegel revealed earlier this year, Zelensky, who is not related to the Ukrainian president, is in a relationship with the Russian president’s daughter. (It is unknown whether they are officially married, but the couple’s daughter has the patronymic “Igorevna,” derived from Zelensky’s first name.) 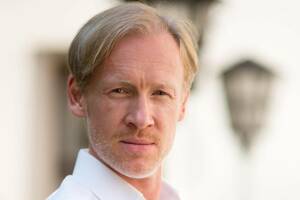 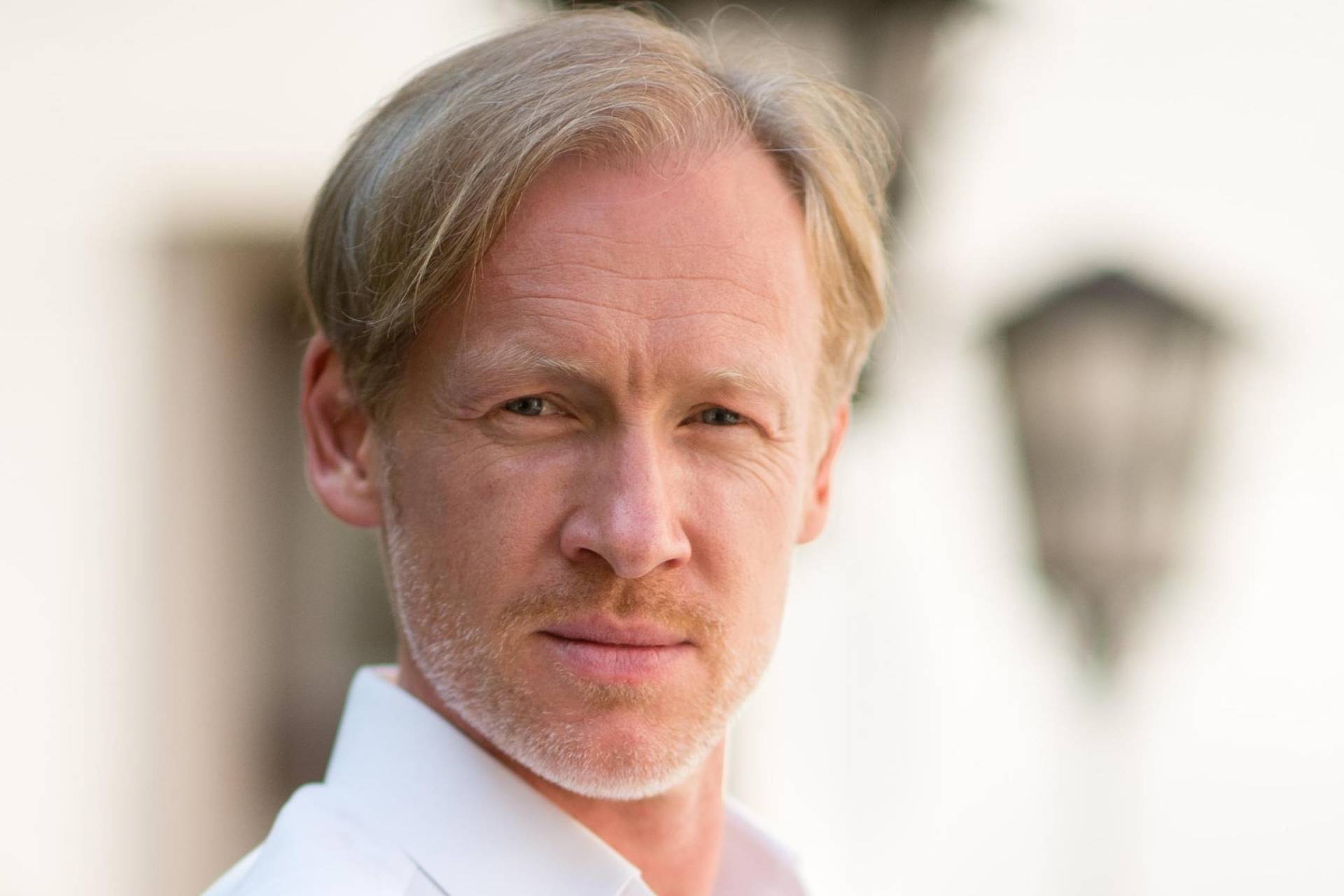 Credit: dpa picture alliance/Alamy Stock Photo Igor Zelensky has danced leading roles at the Mariinsky Theater in St. Petersburg, was a principal dancer with the New York City Ballet, and performed as a guest soloist on many other world stages. He took up the prestigious position with the Bavarian Ballet in 2016 and appears to have lived in Germany ever since.

Zelensky left his post only in April of this year, citing “private family reasons” for his departure.

To visit him, Tikhonova and her entourage flew to Munich almost every month, sometimes with only a few days between trips, over a period of several years. She made little apparent effort to disguise her trips, flying under her publicly known name and using a Schengen visa issued by Italy.

According to Der Spiegel’s sources, it wasn’t until 2019 that German security services learned of her visits.

“We would actually have liked to have known about this [sooner],” a high-ranking official from Berlin told Der Spiegel.

Once an upcoming Tikhonova visit was finally flagged, several of the passports used by her guards aroused suspicion: One had applied for a tourist visa despite traveling on official business; another had two passports with different dates of birth. But little more was learned by the security services, beyond the fact that Tikhonova was chauffeured around Bavaria in heavy limousines. 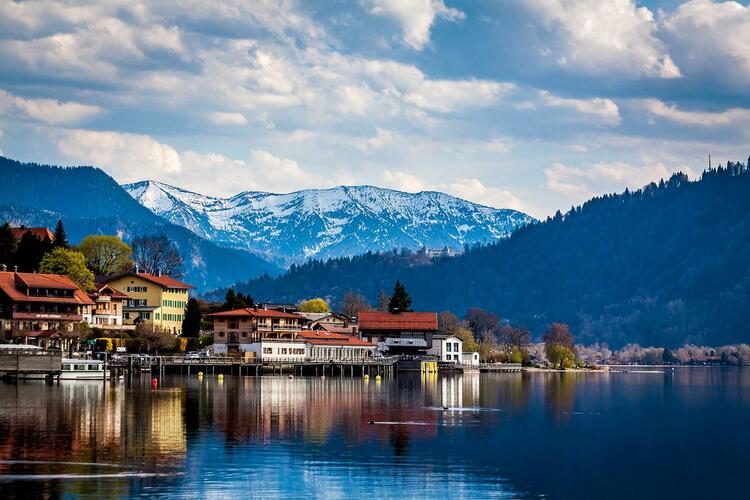 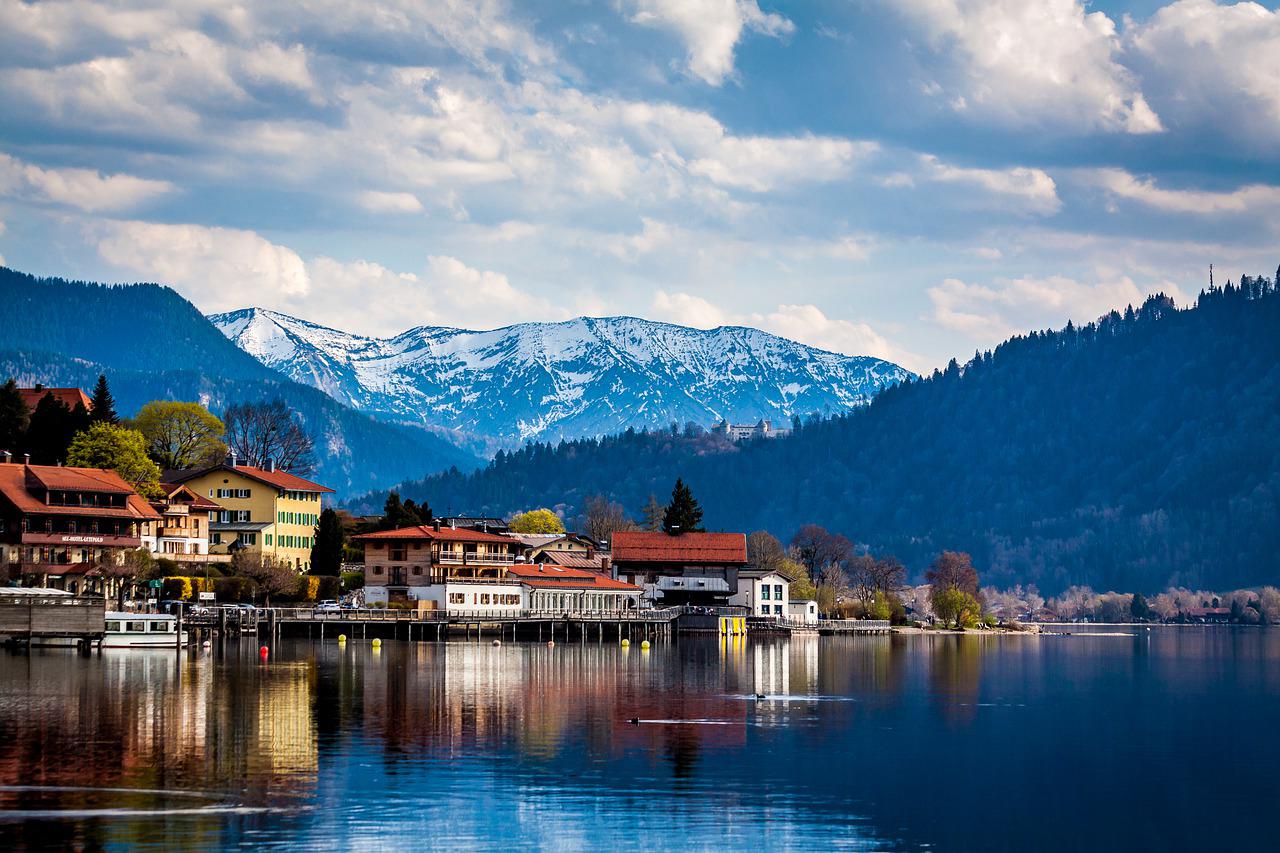 Credit: pixabay According to documents in the email archive, Tikhonova’s German trips were not limited to Munich. In the winter of 2019, her guards’ hotel bookings show, she appears to have stayed at a resort in the Bavarian Alps on Lake Tegernsee.

Tikhonova also traveled to other European countries. At the end of May 2016, Skripchak, the presidential security officer whose emails were leaked, booked a two-night stay for her at the Hotel Continental Relax & Spa in the Swedish port city of Halmstad. The day before she arrived in Sweden, seven Russian security officers checked into a hotel about 5 kilometers away. The next day, three more bodyguards arrived along with her.

In March 2017, Tikhonova spent two nights in London. Skripchak booked six hotel rooms, three for six security guards and three in his own name, presumably for Tikhonova and whoever was traveling with her.

Meanwhile, the trips to Munich continued. But by early 2020, Tikohnova apparently decided to move in with her partner on a more permanent basis. In October 2019, Skripchak received an email with the subject line “Moving to Germany.” In it, a logistics company representative explained how to properly fill out an inventory of transported property.

In support of this thesis is the fact that Skripchak stopped booking hotels in Munich and other foreign cities. Between October 2020 and January 2022, Tikhonova’s security guard only booked hotel rooms seven times — all in Russia and Russian-occupied Crimea. The Skripchak emails have no data on who paid for Tikhonova’s trips, though it’s likely that her bodyguards were paid out of the Russian state budget.

But some of the other costs may have been borne by others. The Gulfstream G650 jet she used originally belonged to Gennady Timchenko, Putin’s longtime friend and one of Russia’s main oil exporters.

As reported by the Russian newspaper Vedomosti, Timchenko’s company had bought this aircraft “specifically for the pleasure of the Russian president.” According to the report, the company’s jets even carried Putin’s pet labrador. 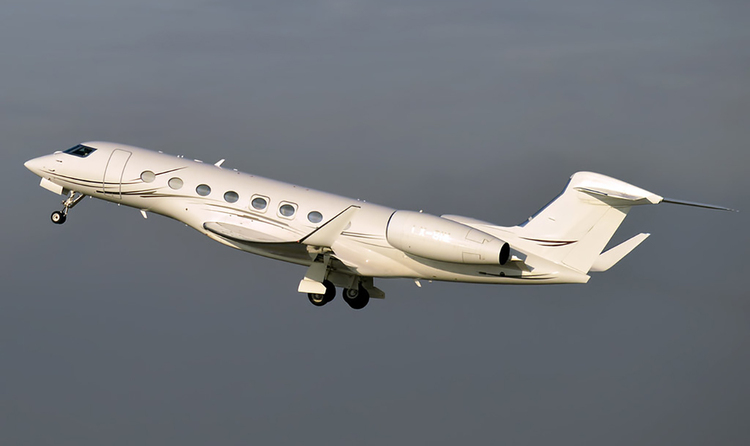 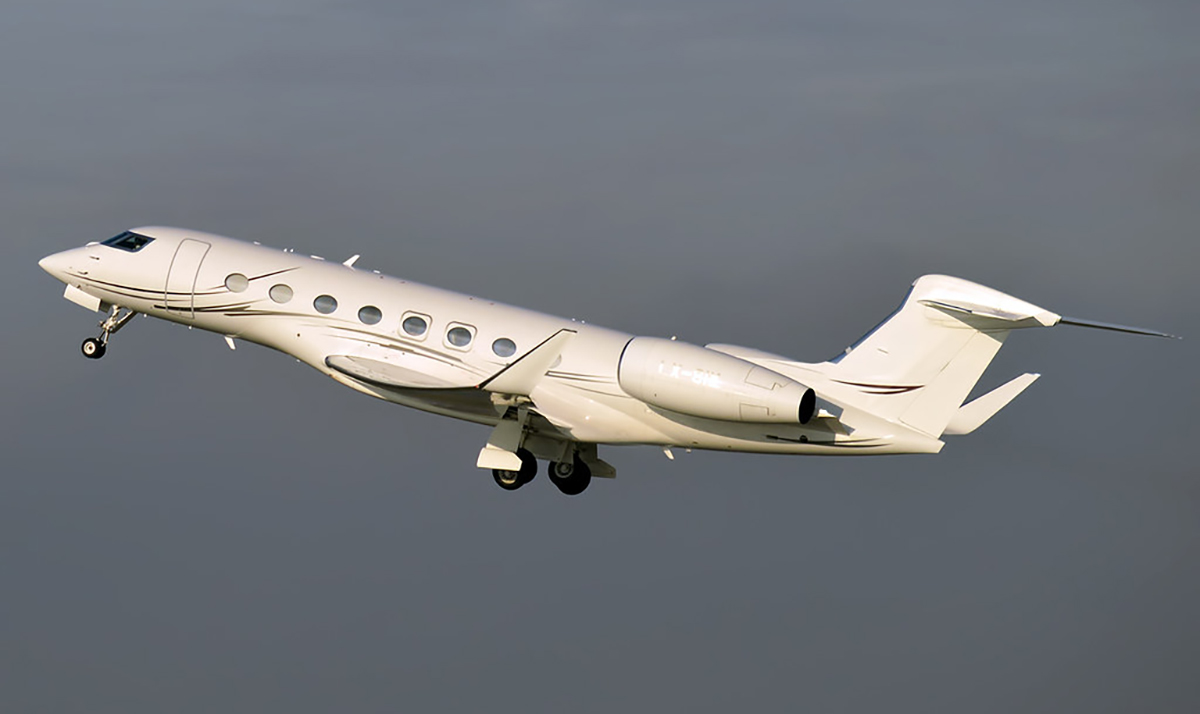 In 2018, the plane was acquired by the Russian Direct Investment Fund (RDIF), a state-owned company headed by Kirill Dmitriev, a man with longstanding connections to the Putin family.

But though he was a guest at the wedding of Tikhonova and her former husband, Kirill Shamalov, his relationship with the Putins was not just personal.

For instance, iStories reported earlier that he shared confidential documents with Shamalov about his investment fund’s future deals with public companies — insider information that is illegal to disclose, but can be worth a fortune.

The RDIF plane was not the only business jet flown by Tikhonova. She also appears to have used a Bombardier aircraft with the tail number M-FINE. This business jet is owned by an offshore company that belongs to Aleksey Repik, a well-known Russian businessman and the founder of the R-Pharm pharmaceutical company.

In 2021, this company was reportedly one of the largest recipients of state drug contracts in Russia and also produced the Russian Sputnik V coronavirus vaccine. Though it was previously investigated by the country’s anti-monopoly agency for anti-competitive practices, including collusion with the Ministry of Health, neither the company nor Repik have faced any serious consequences.

The leaked Skripchak emails have no information about whether anyone paid for the use of this jet. A representative of R-Pharm wrote that the jet had been sold long ago and denied that it had been used by Tikhonova or any members of her family. When notified that reporters had a passenger list for the plane that included Tikhonova’s young child, the company sent no further reply.

Neither Tikhonova nor anyone else mentioned in this story responded to requests for comment.