Stanko Subotic, a businessman twice indicted for cigarette smuggling and known for his links to an alleged drug lord, is set to make millions from the expansion of Belgrade's airport. 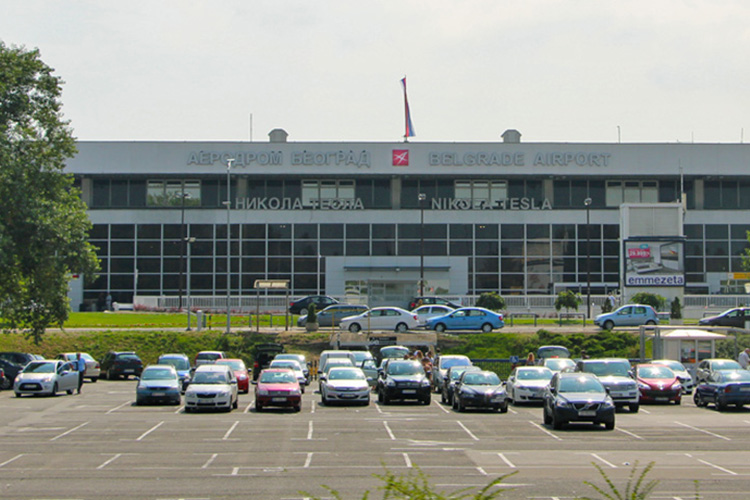 Serbia’s deal to expand Belgrade’s Nikola Tesla airport may soon become a windfall for a twice-indicted businessman with ties to organized crime.

Stanko Subotic, who before the 2008 financial crisis was among the 100 richest people in Central and Eastern Europe, is the single biggest private owner of the land that surrounds the airport, with a total of 111 hectares, according to property records. The airport plans to acquire 28 of these, and Subotic stands to make €28 million or more (US$ 32 million) from the deal.

Details of the Serbian government’s new 25-year-contract with the French company Vinci to run the Belgrade airport aren’t yet public. However, journalists from KRIK, a partner of the Organized Crime and Corruption Reporting Project (OCCRP), obtained partial copies.

An attachment to the contract called “Minimal Technical Requirements” reveals that a substantial portion of the funds to be invested in the airport will be spent acquiring land for its expansion. The estimated cost will be €100 per square meter, according to the document. 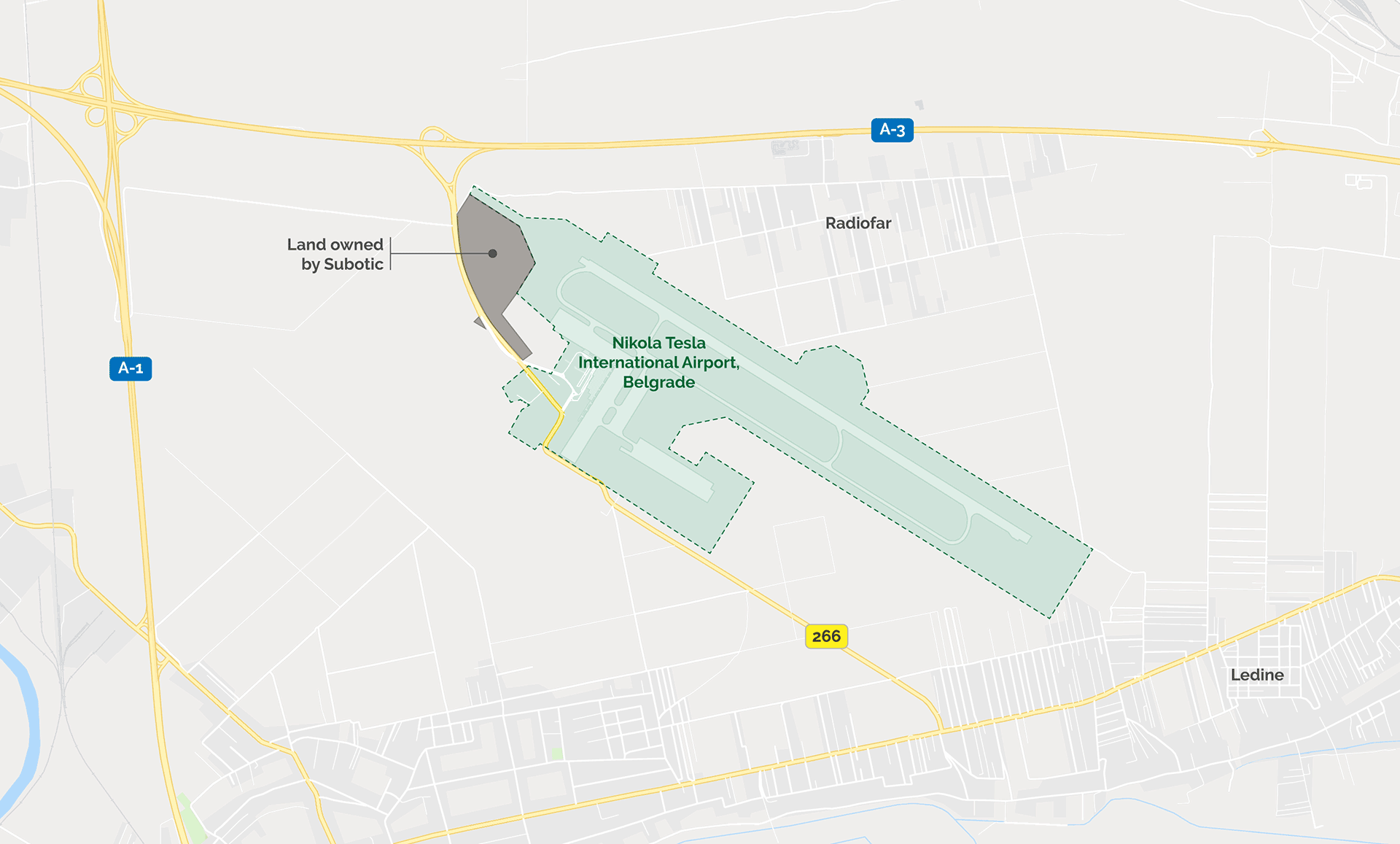 The planned buying spree will likely mean money in the bank for Subotic, whose friends and business associates include accused Balkan drug trafficker Darko Saric and Montenegrin President Milo Djukanovic, who was indicted in Italy for large-scale cigarette smuggling in 2008 but never prosecuted because he had diplomatic immunity.

Past allegations against Subotic himself include two indictments for cigarette smuggling. He was acquitted on some charges and released on others after the statute of limitations lapsed.

Planning documents from the airport clearly show the 28 hectares slated for the expansion, and Vinci has asked the European Bank for Reconstruction and Development (EBRD) for a 100 million euro loan to invest in the project. The EBRD board of directors is scheduled to decide on the application on Oct. 31.

Under Vinci’s contract with the Serbian government, the company is to pay 501 million euros for the airport concession and spend another 732 million euros developing the facility. The contract also calls for Vinci to pay annual fees to the government.

“We have achieved tremendous success and have shown great international reputation with this,” Serbian President Aleksandar Vucic told the newspaper Kurir in announcing the deal on Jan. 5. “I congratulate the government and all citizens of Serbia on this great transaction.”

It appears that Subotic may already be making preparations for the sale. On Sept. 12 he sent a request to the land registry seeking to merge several of his parcels.

OCCRP/KRIK reporters tried to contact Subotic, but he did not respond to requests sent to his lawyer. Vinci’s representatives in Serbia also refused to talk with reporters.

A Fortune in Property

Subotic also owns additional property around the airport, the land registry shows. In total, the holdings add up to over 111 hectares.

Documents obtained by reporters suggest that Subotic has owned the land since at least 2002, though its ownership has been transferred between various companies under his control.

The first was D-Trade, which Subotic founded under the name Mia in 1991 in his hometown of Ub, Serbia. Serbian prosecutors have alleged that the same company was used in cigarette smuggling operations.

In May 2008, D-Trade formed a subsidiary called Posh Properties and transferred the land to it, business records show.

Part of that land is foreseen as suitable for a business park near the airport. Two months before Posh Properties was formed, in March 2008, Subotic hired a court expert to estimate the value of that property.

“Parcels along the access road are foreseen for airport expansion,” the court expert noted.

The spectre of cigarette smuggling has hung over Subotic and his associates for over a decade. In 2007, he was indicted in Serbia and a year later in Italy in the case involving Djukanovic.

Prosecutors accused the Montenegrin president (then prime minister) of cigarette smuggling in league with the Italian Sacra Corona Unita and Camorra crime families, but charges against Djukanovic were dropped because he was immune from prosecution by virtue of his office. 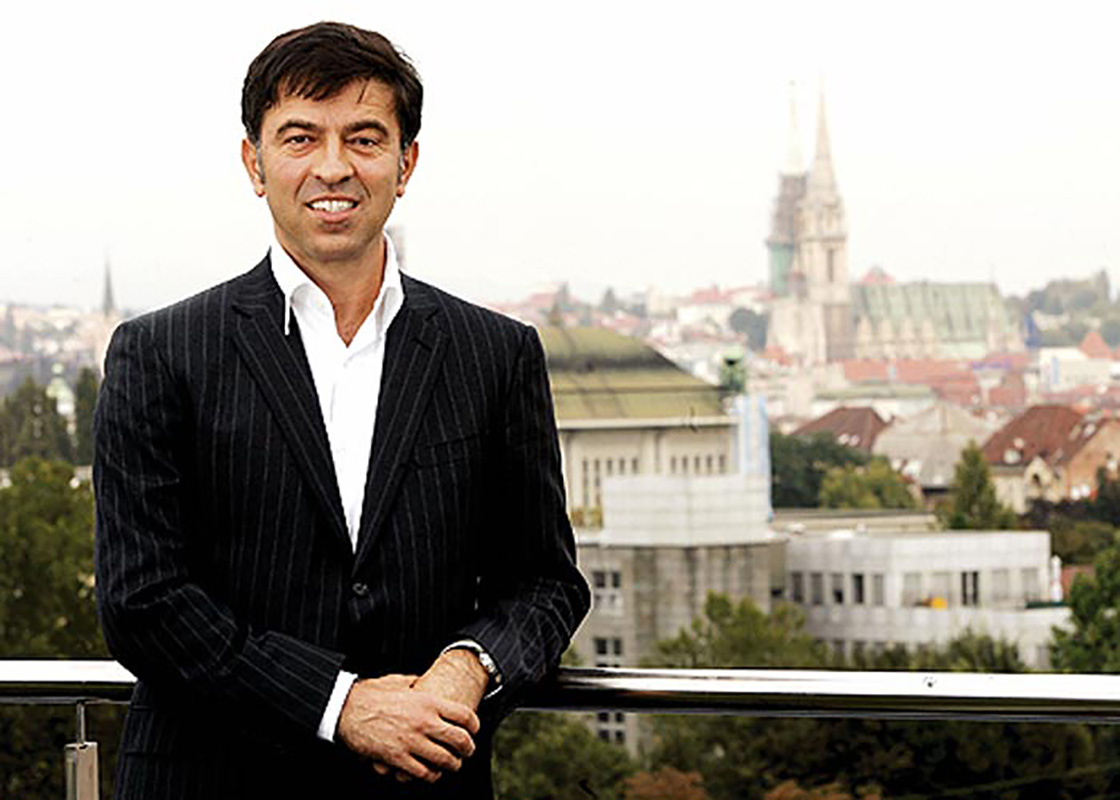 Stanko Subotic. Subotic was found not guilty of the Italian charges in 2013.

In November 2007, a year before the Italian indictment, Subotic was indicted in Serbia as the chief of a criminal organization that also smuggled cigarettes. A Serbian court filed for an arrest warrant with Interpol, but Subotic was safely ensconced in Switzerland.

According to the indictment, Subotic’s close associate in the cigarette smuggling operation was the head of the Customs Bureau, Mihalj Kertes, who allegedly helped plan and organize the import of unregistered cigarettes and their sale on the black market. The scheme may have dated to as far back as 1995 and 1996, costing the Serbian government as much as 30 million euros in lost tax revenue, prosecutors said.

Subotic remained in Geneva during the trial and maintained that the accusations were a setup by the Democratic Party in Serbia. In 2011, he was sentenced to six years in prison.

The next year, Aleksandar Vucic’s Serbian Progressive Party (SNS) came to power, and in 2013, the verdict against Subotic was overturned in favor of a retrial. Two years later, the court said the statute of limitations had expired on some of the charges. Subotic was finally acquitted of the rest in December 2015.

The Supreme Court of Cassation later determined that the judges who acquitted Subotic did so illegally, though that finding didn’t reverse his acquittal.

Ties to an Accused Drug Lord

Meanwhile, a Serbian investigation called “Balkan Warrior,” which looked into the network of accused drug lord Darko Saric, has turned up numerous business ties between him and Subotic.

Subotic’s name surfaced several times in documents from the case, though he was never charged.

The links between the two men include:

Separately, the U.S. Drug Enforcement Administration has also identified a Stanko Subotic as a member of Saric's criminal organization.

Saric remains on trial in Serbia for smuggling almost six tons of cocaine and laundering more than 22 million euros.

The relationship between Serbian President Vucic and Subotic, if any, is unclear.

While both men are close with the Montenegrin president, Subotic has said his only support for Vucic has been his vote. The two appear to have stayed in the same hotel in Paris in October 2007, but Vucic said they did not meet there, and no business ties have ever been discovered.