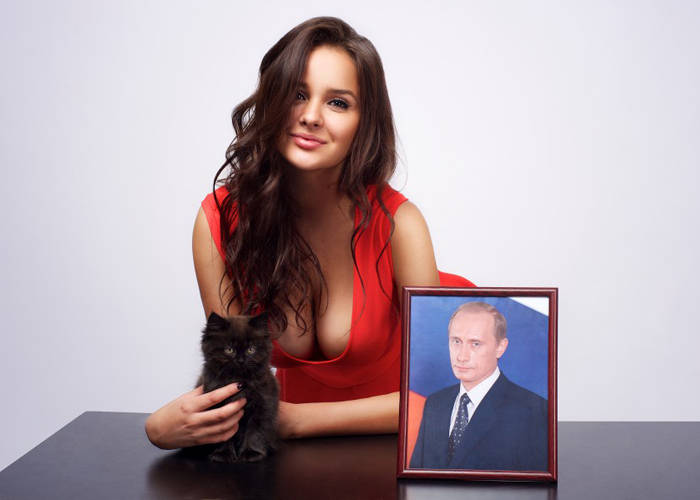 A murky Russian businessman that formerly ran a state property agency has been buying apartments in Moscow for a number of young women that include the daughter of Russian Federation President Vladimir Putin; Putin’s alleged girlfriend; and a woman who, in a flirty web posting titled “Pussy for Putin,” offers the Russian leader a kitten and praises his leadership skills.

Grigory Baevskiy, 47, works for Arkadiy Rotenberg, a Kremlin insider and long-time Putin friend and his judo sparring partner. Records show Baevskiy not only helped Putin handle some of his most delicate personal situations but also made a fortune from questionable deals with the Russian state.

Putin has always tried to build an impenetrable wall around his family to protect them from the scrutiny he endures and the risks inherent in his job. The Kremlin has never even confirmed the identities of Putin’s children, despite worldwide media speculation for years over their background.

But cracks appeared in that wall last year, when Katerina Tikhonova, a young, low-profile woman without significant professional qualifications, was suddenly put in charge of a prestigious and ambitious US$ 1.7 billion project to expand the campus of Moscow State University (MSU). Investigations by the Russian daily RBC, Reuters and OCCRP proved that Tikhonova is actually the youngest daughter of the Russian leader.

Much of Tikhonova’s scientific work for the university was financially supported by the biggest Russian state-owned companies which are headed by Putin’s closest allies.

One of the most closely guarded secrets of the Russian state is where the President’s family lives. The information is seldom even recorded. However, in 2012, while establishing a foundation related to her work, Tikhonova listed her official address which OCCRP was able to verify. Tikhonova’s official residence is a modest one-room apartment in the Moscow region, not far from Novo-Ogarevo, the place where her father usually works and lives. For security reasons OCCRP will not disclose the address.

Since 2007, the apartment where Tikhonova is registered to live has belonged to Baevskiy, a businessman from St. Petersburg who to date has had no public profile.

In the mid-2000s, Baevskiy worked as director of the Directorate for Investment Activities (DIA), a state enterprise that belongs to the Russian Agency for Management of the State Assets.

The DIA’s main function is to oversee the management of state property. So when Baevskiy quit his public duties in 2009 he didn't have to change his specialization: from state property he moved to manage the private property of Putin’s family.

Public records indicate that even as he was heading the DIA, Baevskiy was already closely connected to Arkadiy Rotenberg, one of Putin’s oldest friends. Rotenberg has been sanctioned by the US and European Union (EU) authorities as retaliation for Russia’s seizure of Crimea.

According to the EU Council, Rotenberg has thrived under Putin’s patronage.

“He has developed his fortune during President Putin's tenure. He has been favored by Russian decision-makers in the award of important contracts by the Russian State or by State-owned enterprises. His companies were notably awarded several highly lucrative contracts for the preparations of the Sochi Olympic Games” the council said.

The Russian edition of Forbes magazine, in its 2016 rating of “Kings of the State Contracts,” rates Rotenberg as number one with more than half a trillion rubles (US $7.4 billion) in state contracts. Many if not most of the contracts awarded to Rotenberg companies were awarded without tender competition.

Baevskiy’s connection to Rotenberg is long-standing. In 2004, Baevskiy transferred a very expensive apartment in the center of Moscow, on Bolshaya Ordynka Street, to Rotenberg’s daughter Lilya.  Since 2006 Baevskiy, together with Rotenberg and his brother Boris, have been the founders of Otechestvo, a dacha community not far from St. Petersburg.

After leaving his post in the DIA, Baevskiy joined Rotenberg’s business, showing up on a list of people officially affiliated with the SMP Bank, which is owned by the Rotenberg brothers. From 2011 until 2014, Baevskiy also worked as the general director of the Russian Holding Company (RHC) whose ultimate beneficiary is Rotenberg.

The RHC holds many of the jewels of the Russian economy. It is the only shareholder of the National Chemical Group, one of the biggest companies in the Russian fertilizer market. The RHC is also involved in a management role in a US$ 6 billion highway project as part of the “Silk Way,” a highway from the border of Belarus to Kazakhstan which will be a fast overland route from Western Europe to China.

Baevskiy is not just an employee.  He has been developing his own businesses and, as in the case of Arkadiy Rotenberg, Baevskiy’s companies earn most of their money from Russian taxpayers. According to OCCRP calculations, in the past two years Baevskiy’s businesses won more than 6 billion rubles (US $88 million in current value) in state contracts.

Baevskiy’s biggest contract was a 2.7 billion rubles (US$ 82 million) award in 2013 to grade the land in preparation for the construction of a beltway road around St. Petersburg. (on 21.6.2013)

Baevskiy likes to spend the money he gets from the Russian taxpayers on luxurious things. He owns a long list of properties worth millions of dollars across the country, from St. Petersburg to Moscow and Gelendzhik in the south of Russia near Sochi where Putin also has a palace. His private apartment in one of the most expensive districts of Moscow, on Prechistenka street, is likely to be worth at least 50 million rubles (US $740,000). Baevskiy is also the owner of a sleek 65-meter superyacht, the Rahil, which was built in 2011 by the Italian manufacturer Benetti. Rahil, previously named Nataly, won a prestigious Nautical Design Award in 2011 as the best motor yacht in the larger-than-40 meter category. 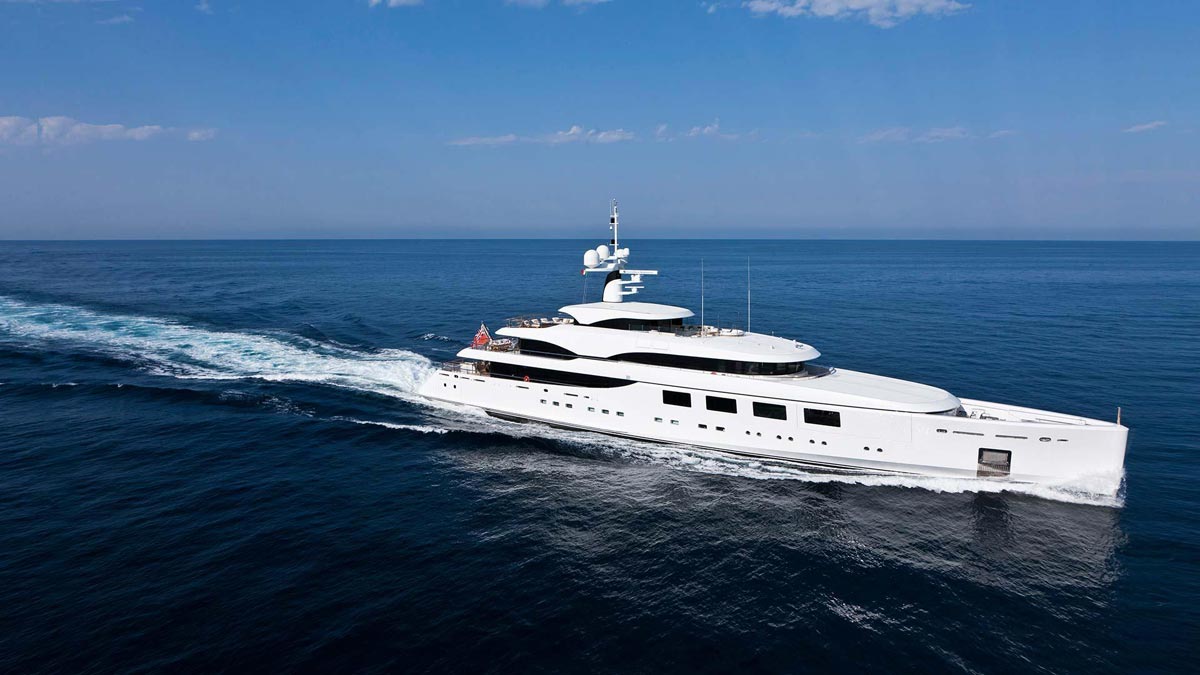 Baevskiy's boat the Rahil, formerly the Nataly, has won an award for best design. (Photo by: Benetti Yachts)

Ladies from the Circle

Tikhonova is not the only woman from Putin’s circle who obtained housing through Baevskiy. According to the Russian land register, in 2009 Baevskiy transferred a 228-square-meter apartment on Vereseaeva Street in Moscow to Leyasan Kabaeva, sister of Alina Kabaeva.

Alina Kabaeva is an Olympic rhythmic gymnastics champion and the head of the board of the National Media Group, one of the biggest media holdings in Russia. It is controlled by Putin’s long-time friend, Yuriy Kovalchuk. Kabaeva has been rumored for years to be Putin’s girlfriend, but Putin has aggressively denied these speculations along with other attempts to pry into his private life. The rumors have never been proven.

In 2013, Baevskiy also transferred a plot of land and a house in the upscale town of Uspenskoe in the Odintsovo district of the Moscow region, to Anna Zatsepilina, an 81-year-old pensioner. This is one of the most expensive neighborhoods in Russia, where 100 square meters of land can cost upwards of US$ 100,000. It is the favorite place for Russia’s richest citizens: oligarchs, high-ranking officials and celebrities. Uspenskoe is just a 15 minute drive from the official residency of Vladimir Putin in Novo-Ogarevo.

The Russian land register doesn't provide details of the deals, so OCCRP could not find whether these properties were sold or just presented as gifts.

Afterwards, Kharcheva enrolled at the school of journalism at the Moscow State Institute of Internal Relations. In 2012, she sent another birthday greeting to the Russian President. In a blog titled “Pussy for Putin,” Alisa published suggestive photos of herself posing with a photograph of Putin and a kitten, which she said was a gift for the president.

“I think he [Putin] is a fabulous man, a strong leader and the ideal head of the country … I found a great kitty as a gift for the president. I believe it will bring Putin only luck … And until Vladimir Vladimirovich takes his gift, the kitty will live with me,” wrote Kharcheva.

Reached by a reporter from OCCRP, Kharcheva said she bought the property from Baevski, who she does not know, through a real estate agent.

When asked if she had any connection to Putin and if the apartment was a gift, she laughed and said “Nonsense. … Of course not. Everybody has already forgotten about the calendar."