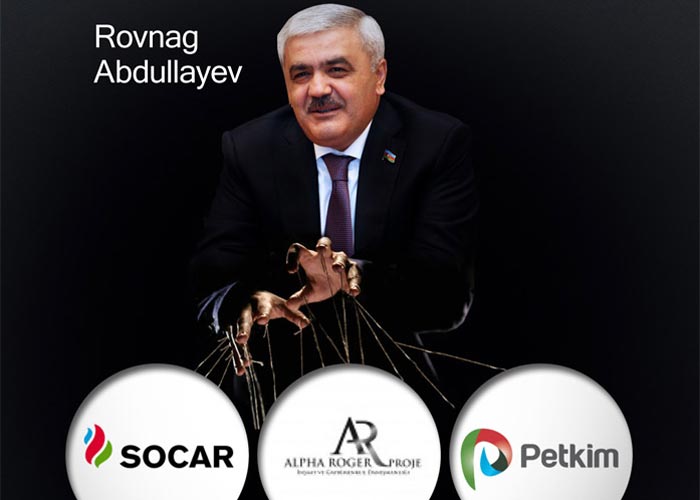 Rashad Abdullayev is one busy 21-year-old.

At an age when many Azerbaijani youths would be happy to land entry-level jobs, he has amassed an impressive resume and an even more impressive portfolio of companies.

He has also set himself up to be perceived as a personal benefactor for Azerbaijani students in Turkey, using not his own money but funds from SOCAR, the state-owned oil company his father heads.

Since arriving in Istanbul in 2010 at the age of 17 to study chemical engineering at Koch University, he started working at SOCAR Trading, which was established by SOCAR to organize sales of Azerbaijani oil in international markets. 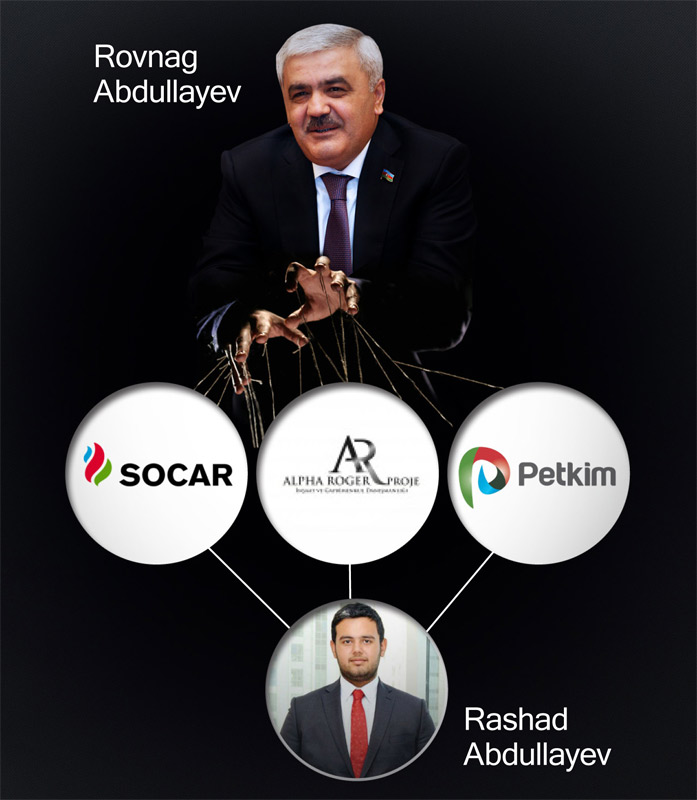 Azerbaijani laws are clear about conflicts of interest, says lawyer Muzaffar Bakhishov. The country’s anti-corruption law states that close relatives of officials can hold no position under their direct supervision, except for elective positions and other cases foreseen by legislation.

When such a situation occurs, one of the relatives must leave his or her job within 30 days or face dismissal. Company officials and Rashad Abdullayev declined repeated requests for clarification of how his employment squares with this law.

The younger Abdullayev has been active in at least one other business with no apparent connection to SOCAR. In the “Quality” interview, Abdullayev said he owns the B-LONG resort restaurant in the Turkish city of Bodrum. OCCRP has not found documents proving his ownership. In the interview, he describes his future plans to open hotels in Istanbul and other cities.

Rashad Abdullayev has been as active on the charitable front as he has in business, and his connection to SOCAR in that arena seems just as strong.

For 200 Azerbaijani university students in Turkey struggling to make ends meet, Rashad Abdullayev seems like a hero because he gives them money. But the money actually comes from SOCAR, a 100 percent state-owned company, which means it’s the Azerbaijani people’s money that is being given to students.

But Abdullayev, barely out of university and already listed as the sole owner of five companies in Turkey, is in position to take full credit – and he does.

The younger Abdullayev operates the Center for Development of Azerbaijani Human Capital (AZEDER), a non-profit organization registered in Turkey.

While the government aid packages are not lavish, Turkish education costs can be low enough that even poor students can survive if they can get help from other sources. The Turkish government offers students from 16 “Turkic republics and countries” (including Azerbaijan) tuition at the Turkish national rate, or about a third of what other foreigners pay.

Here’s how it breaks down:

Most students, however, get only the Turkish aid package. If they prefer to share rental flats rather than live in the free dorms, their costs can rise to US$ 300 per month, according to Gasimzade.

His center spends about US$ 240,000 annually to provide 200 lucky students an extra US$ 100 a month for 12 months. According to the students, there is no exam or any criteria announced. Students are simply directed to links on a website to apply. Nobody from AZEDER has responded to OCCRP questions on how students are chosen. 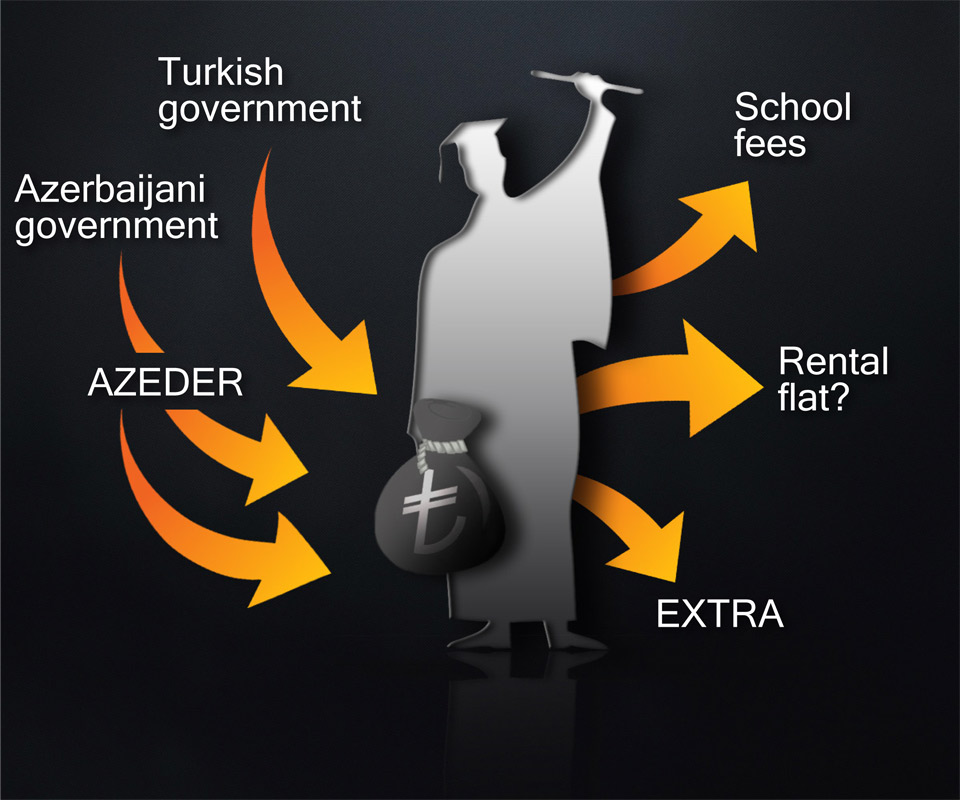 The allowances are paid for 12 months, and a student is eligible for one year only. The money can be used for bachelors, masters or doctorate programs.

AZEDER also did not respond to questions about where it gets its funding. But at numerous parties and functions held by the organization in Turkey, SOCAR banners dominate the room. SOCAR vice president Khalig Mammadov and SOCAR’s representative in Turkey, Kanan Mammadov, have both given interviews stating that SOCAR generously supports AZEDER.

Neither SOCAR nor AZEDER answered questions about how much money is given by SOCAR to AZEDER for administrative or other costs beyond the student assistance.

But it is clear that the support from AZEDER is considered an important career step for students. Istanbul University student Shukran Garayev wants to be selected for an internship program at a major petroleum firm like Statoil (based in Norway), Petkim Petrokimya (based in Turkey), or British Petroleum.

Or he would like to be chosen for the European Youth Parliament, a 27-year-old program that brings together young people from 41 countries for what the Parliament describes as the “development of young people into politically aware and responsible citizens by involving them in European political thinking and promoting intercultural understanding.”

Garayev believes money is not the greatest benefit being chosen by AZEDER confers. “The role of Rashad Abdullayev is huge,” Garayev says. “Those of us who would never dream about being in the European Parliament might be able to do that for free.” He praises Abdullayev as a sincere and modest young man, despite being the son of the president of SOCAR, one of the most powerful men in Azerbaijan.

Rashad Abdullayev has been tireless in organizing social activities for AZEDER, with sponsorship by SOCAR. The official AZEDER webpage includes information on many Istanbul receptions and dinners, which were attended by hundreds of students.

AZEDER’s official opening was a posh reception on September 21, 2013, for 500 people at the Tarabya Hotel. At that event, Rashad Abdullayev promised that the organization would go global, while continuing local projects from which the nearly 7,000 Azerbaijani students in Turkey would someday benefit.

One of the first AZEDER events was a reception at the Kent Hotel for 400 students, sponsored by the Azerbaijani embassy in Turkey, SOCAR and Palmali Group – an oil shipment partner of SOCAR. Fourteen Azerbaijani students who received AZEDER aid were introduced at the event.

On October 17, 2013, SOCAR’s Turkey office sponsored a Eid-Al-Adha dinner for Azerbaijani students in Turkey. (The holiday marks the end of the pilgrimages to Mecca in the Muslim calendar).

On December 29, 2013, AZEDER invited 350 Azerbaijani students in Turkey to attend The New Year and World Azerbaijanis Solidarity Day at an Istanbul Sheraton Hotel. The event was sponsored by SOCAR’s Turkey office.

Emin Milli is one of the founders of the Alumni Network, a group of Azerbaijani alumni who received educations abroad. He says building a reputation for their children – at public expense -- has become a new trend among Azerbaijani oligarchs.

“Most of the students don’t realize that the money and opportunities they receive are paid from the public pocket – the State Oil Company -- thus bypassing the budget,” Milli said. “If that money would be directed to students through the state budget, the students would be grateful to their state, not to Rovnag Abdullayev’s son.”

Two sons of the Minister of Emergency Situations, Kamaladdin Heydarov, run an organization called The European Azerbaijani Society in Europe (TEAS), with headquarters in London. Anar Mammadov, the son of Transportation Minister Ziya Mammadov, is the head of the Azerbaijan America Alliance (AAA). Both TEAS and AAA are involved in lobbying for the Azerbaijani government, and offer free trips to Western legislators and journalists.

“Lobbying requires money, and only oligarchs have it. They also have connections and power to push buttons when some people need it. This is the key to success, if you want to call it success,” Milli said.