A cloud is hanging over the Republic of Georgia, a country that promotes itself as a tourism heaven of spectacular mountains and clean, fresh air.

Independent lab tests have confirmed what many Georgians suspected: much of the fuel burned by the nation’s drivers is far dirtier than would be allowed in any European Union country, and the country’s weak enforcement standards are giving rise to deeper worries about spikes in respiratory disease.

The tests show that the dirtiest fuel is coming from neighboring Azerbaijan, which may have policy implications for Georgia, since the State Oil Company of Azerbaijan Republic (SOCAR), which exports the fuel, is Georgia’s largest taxpayer. A sample of SOCAR diesel fuel tested 60 times higher than the current European standard.

SOCAR is wholly owned by the Government of Azerbaijan. SOCAR Energy Georgia, which is 51 percent owned by SOCAR and 49 percent owned by two United Arab Emirate-based companies (Heritage General Trading FZE and Petro-Trans FZCO), is the largest taxpayer in the country (about US$74.271 million in 2013).  SOCAR Energy Georgia controls the natural gas distribution network in 30 regions of Georgia and operates the Kulevi Oil Terminal at Georgia’s Black Sea port of Poti. 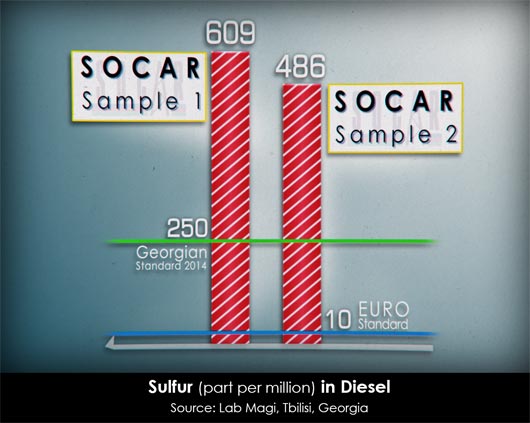 The Azerbaijani company also has an outsized cultural footprint in Georgia, as its public service funding supports the Georgian Olympic Committee and Georgia’s football and chess federations.

Studio Monitori, an Organized Crime and Corruption Reporting Project (OCCRP) partner, investigated where Georgia buys its fuel, what the country’s clean-air standards are, how they are enforced, what is actually in the various brands of fuel sold, how after-market modifications of cars affect air quality, and whether there may be an impact on public health.

How lax are Georgia’s standards for pollutants? In some cases, the rules allow concentrations 20 times higher than European standards. Fuel samples collected by Studio Monitori show that some brands of fuel sold in Georgia exceed even those lax standards by significant amounts.

The samples were tested for a variety of components by LTD Magic Lab, an independent chemical analysis facility in Tbilisi.

Records show that Georgia imports three out of every four liters of diesel fuel from SOCAR  – or more than 250 million kg, according to the Georgia Revenue Service.

There are several reasons why dirty fuel is an important issue in Georgia:

The Ministry of Environment has developed an air pollution control program that includes a provision for monitoring fuel quality. It was supposed to take effect on January 1, 2014. But Parliament has yet to approve the legislation.

Meanwhile, back in SOCAR’s home country of Azerbaijan, clean fuel standards are improving. As of April 1, no automobiles more than 10 years old can be imported, and only Euro-4 grade gasoline which meets the low European standards for pollutants can be sold.