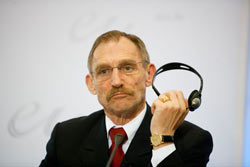 Hungarian Minister of Interior Sandor Pinter takes part in the plenary session of the Hungarian Parliament on 7 July, 2011 in Budapest, Hungary. Photo by: Zoltan Tuba/Origo.hu

Sándor Pintér, Hungary’s Minister of the Interior, says he has no links with the private security firm that he sold in 2010 and that has continued to gain one lucrative government contract after another.

Pintér says he sold the business before his appointment as minister in 2010 explicitly in order to avoid any possible conflict of interest.

But while the minister has no links on paper to the corporation, recent changes have left the firm in the hands of former business partners with close ties to Pintér and his family.

Company records show that the firm, Civil Biztonsági Szolgálat Zrt. (Civil Security Service Inc. or CBSZ) was taken over in July 2013 by two people connected in multiple ways to the minister and his family: his former next-door neighbor, Péter Szabó, and Vilmos Tölgyesi, who has worked with Pintér, his wife, and his daughter in various enterprises.

Pintér, a soft-spoken former National Commissioner of Police, has an extensive record of public service as well as an enviable knack for growing a prosperous business.

This is his second stint as Minister of the Interior. He first held the post during the initial government of the current Prime Minister, Viktor Orbán, until its defeat in 2002. Out of a job, the former minister took over CBSZ in 2003, when it had annual revenues of 1 billion forints (US$4.8 million), records show. When he sold it seven years later, it was making six times as much.

Under Pintér’s leadership, the company became a major player in the security industry. It won contracts with some of the country’s most important private companies in the banking and energy sectors. Its revenue grew by almost a billion a year to reach more than 6 billion forints (US$29.5 million) in 2010.

That was the year Pintér was again invited to lead the Ministry of the Interior in Orbán’s new government. He sold the company in late March, when polls showed Orbán’s party with a firm lead ahead of the April election. 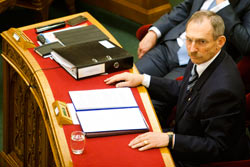 Hungarian Minister of Interior Sandor Pinter takes part in the meeting of interior- and justice ministers of the European Union in Godollo, Hungary on 14 April 2011 during the Hungarian presidency of the EU. Photo by: Zoltan Tuba/Origo.hu

The new owner of CBSZ was Prostasia Zrt., a company that had been founded just three months previously. Its owner, Tibor Kántor, had reportedly served as a senior tax official in the late 1990s. In 2006 he partially owned and managed a small consultancy group and became part-owner of a small security firm, S-System Service.

It is unclear how Kántor managed to move up so quickly to buy a security company that was making billions of forints yearly. Although the sale of CBSZ was widely reported at the time, Kántor did not talk to the press. CBSZ’s management did not give any details of the deal in their press releases.

Records show that last July, Prostasia Zrt. was taken over by Szabó and Tölgyesi.

Although CBSZ has been under close scrutiny by the press and some opposition politicians, this development has not yet been reported. This may be because the new owners took over the parent company, rather than the much more visible CBSZ.

Both Tölgyesi and Szabó are connected to Pintér in a variety of ways. Tölgyesi was on the supervisory board of another security corporation, Preventiv-Security, when Pintér was on its board of directors, in 1997 and 1998. All three were the owners of a real estate company, Immobil 2000, in 2002-2003. Szabo has served on the board of directors at CBSZ since 2004. Szabó and Pintér were neighbors in a wealthy district of Budapest, until Szabó’s address changed in 2006, records show. Szabó and Pintér were on the board of directors of another security company, Pajzs 07, from 2008 to 2010. This company is owned by CBSZ.

Tölgyesi and Szabó have business ties not only to Pintér but to his family. Szabó was on the supervisory board of two real estate companies managed by Pintér’s wife, Ildikó Eötvös Pintérné. She and Tölgyesi have been among the owners of a car dealership company since 2009. Tölgyesi also co-owns a company that is managed by Hajnalka Pintér, one of Pintér’s daughters.

Szabó confirmed that he and Tölgyesi purchased Prostasia, but declined to give details about the deal and his relationship with Pintér. “Everything that can be known is in the public documents”, he said, and hung up the phone. Tölgyesi did not respond to calls made through CBSZ.

CBSZ also declined to comment on the deal. “In general we don’t answer such inquiries,” an official said.

The response from the Ministry of Interior said that: “The minister cannot comment on properties owned by other people." Kántor, the previous owner of Prostasia, did not respond to messages sent through his wife, whose cell phone number is available in the public registry. Kántor himself is unlisted. 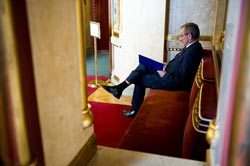 Hungarian Minister of Interior Sandor Pinter studies a dossier while sitting in a side corridor in the Houses of Parliament in Budapest, Hungary on 5 July 2011. Photo by: Zoltan Tuba/Origo.hu

Company documents do not reveal any details. There appear to be no contracts spelling out how Tölgyesi and Szabó took control of Prostasia, the parent company of a business making billions of forints.

Szabó entered the business sector in the early years of this century. According to press reports, he was a high-ranking police officer at the time.

Tölgyesi spent most of his working life at the state-owned public transport company of Budapest. He left the company in 2007 at the age of 69. According to an official response from the company, Tölgyesi earned a reasonable but not excessive salary in his last position (around US$2,000 per month after taxes) but he left with a sizeable exit package of about US$370,000, which the company later tried to get back in an unsuccessful court action.

Now Szabó and Tölgyesi are joint owners of CBSZ through Prostasia Zrt. The latest annual report for CBSZ shows that in 2012 the company had nearly 9.5 billion forints in revenues (US$43.1 million), a jump of more than 50 percent since 2010. This does not include the billions made by at least six subsidiaries of the company that provide, among others, alarm services and logistical services based on GPS tracking of traffic data.

CBSZ does not reveal the sources of its revenue, but procurement records show that the firm has been successful in winning state contracts. Between 2010 and 2011, the company was hired to protect some of the biggest state-owned enterprises in the country:  Hungarian Development Bank, the Hungarian Electricity Inc., and the Hungarian National Asset Management Inc., among others.

Some of these are long-term contracts. The Hungarian National Asset Management Inc. signed a contract with CBSZ in 2011 that will end in December 2014. According to contract details disclosed by the state company, CBSZ can earn between 1.2 billion forints (US$6.5 million) and 4.3 billion forints (US$23.4 million), depending on the amount of work they do.

CBSZ kept winning in subsequent years as well, sometimes in consortiums with other security companies. Last year CBSZ and another corporation were hired to protect the properties of the National Media and Info-communications Agency for more than 108 million forints (US$487,000).

In 2012 when asked in Parliament about his former company’s success in winning state tenders, Pintér said: "My response to this is very simple. Neither the Ministry of Interior nor I have anything to do with how my former company won contracts in public tenders after I had sold it."

Hungary’s next general election will be held this April. The governing party has a significant lead in the polls, and Prime Minister Orbán has made it clear that he is very satisfied with his Minister of the Interior. He even hinted that he would keep him on in this position if the party wins again.