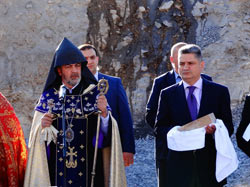 By Edik Baghdasaryan and Kristine Aghalaryan

If you believe the signatures on the documents, Armenia’s Prime Minister Tigran Sargsyan and Armenian Apostolic Church Archbishop Navasard Kjoyan are partners with a businessman charged with money laundering for taking a US$10.7 million bank loan and then depositing most of it in accounts he controlled in Cyprus.

The archbishop says he didn’t sign the documents. The prime minister has called for an investigation.

The man accused in the scheme—the archbishop’s godson, Armenian businessman Ashot Sukiasyan—says he used their names without their knowledge.  After fleeing Armenia and eluding law enforcement for 18 months, Sukiasyan was arrested on February 1 at the airport in Tbilisi, Georgia.

The Armenian government is investigating whether the signatures are genuine or forgeries. The documents list the prime minister and the archbishop (using his baptismal name, Samvel) as one-third owners, along with Sukiasyan, in Wlispera Holdings Ltd. (Cyprus), a company that received the loan money.

But the real loser in the case of the missing money is not the bank, but Armenian businessman Paylak Hayrapetyan, who put up collateral for the loan deal which he thought was sanctioned by the Armenian government.  Now his property is being seized and sold to other Armenian businessmen.

The paper trail uncovered by OCCRP partner HETQ.am shows that between June 25, 2010 and June 15, 2011, Sukiasyan borrowed US$10.7 million in the name of Wlispera Holding Ltd. and its subsidiary, ABS Global Limited.

The company borrowed the money from AmeriaBank, which is based in Yerevan but registered in Cyprus. Its ownership is unclear.

For collateral, Sukiasyan used Hayrapetyan’s assets, with his permission.  Now AmeriaBank is seizing those assets to pay off the loan. Sukiasyan faces a variety of charges, including money laundering.

Sukiasyan fled Armenia for Georgia in July 2012. He was arrested on February 1 at the airport in Tbilisi after he arrived on a flight from Turkey. He is currently being held in Georgia while negotiations are being held on his possible deportation to Armenia.

While he was on the run, he sent a statement to HETQ.am in which he denied that the prime minister and archbishop were his partners. He later e-mailed the Prosecutor General, saying that he added the two names to the Wlispera Holdings documents without their knowledge.

The prime minister says he has asked the prosecutor to investigate. The archbishop denies involvement, and the diocese stated that the public should “not be taken in by the dissemination of such information.” Neither has been questioned by the prosecutor’s office.

Armenian police investigators traveled to Cyprus in September to verify whether the signatures on the company registry document are legitimate. The evidence they found is now being examined by the Ministry of Justice.

Hayrapetyan, who put up real estate and other assets as collateral that his lawyer valued at US$33 million, says the deal was set up to invest in an Armenian operation that would import and process diamonds from mines in Sierra Leone.

“In 2009, when the Armenian government was pushing a plan to develop the diamond and jewelry sector in the country, I invested US$3.5 million and launched a business employing 400. I built a factory and a trade school to prepare craftspeople” to process raw diamonds, Hayrapetyan says. 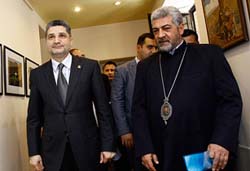 “One day, I received a call from Gagik Kocharyan, then the head of the Trade and Market Regulatory Department at the Ministry of Economics. He invited me to see the minister on an urgent matter regarding (the diamond sector).”

Hayrapetyan says that when he arrived at the Ministry of Economics he met the prime minister on the stairway as he was leaving the meeting. Hayrapetyan says he then entered the meeting room where Economics Minister Nerses Yeritsyan was seated. On one side of him was Archbishop Kjoyan, and on the other, the businessman Sukiasyan.

Also present were the heads of 23 diamond and jewelry manufacturers. The minister told them that US$100 million of a US$500 million loan from Russia would be given in the form of raw diamonds. Russia agreed that Armenia would repay this amount in the form of finished diamonds. According to Hayrapetyan, the minister told the manufacturers they would have to employ 10,000 workers as part of the loan deal.

“Then the minister gave the floor to Ashot Sukiasyan, who said that he owned mines in Sierra Leone, and that he was ready to provide quality raw material 15 percent cheaper than the Russian offer,” Hayrapetyan says. “Everyone was happy about this, (the minister) Yeritsyan and his friends. They agreed.”

Hayrapetyan said that 20 days later, at a second meeting, Sukiasyan produced sample diamonds.  Experts confirmed the diamonds were of high quality, he said.

Sukiasyan claimed he could supply Armenian businessmen with diamonds for many years if a US$12 million investment was made in his African mines to purchase some necessary equipment. Those present at the meeting were then escorted by the ministry department head Kocharyan to ArmSwissBank to seek funding.

“Since it was such a large-scale government project and I was the eldest of those present, I said that I would be able to immediately place my property as collateral so that the others wouldn’t have to do so individually,” Hayrapetyan says.

Hayrapetyan says that Sukiasyan later told him that ArmSwissBank had refused to grant the loan, but that AmeriaBank had agreed to lend US$10.7 million to Sukiasyan.

While the money was loaned in the name of Wlispera and A.B.S Global, the money was actually deposited into the AmeriaBank account of Dzoragyugh Production Cooperative, a private company owned by Sukiasyan, his wife and daughter.

Wlispera Holdings, owned on paper partly by the prime minister and archbishop, is a co-owner with STR Emerald of A.B.S. Global, the company that received most of the transferred money.

Reporters for HETQ.am were able to trace some of the money transfers. Some of the money apparently did make it to Sierra Leone, but a significant amount of it was transferred back into AmeriaBank accounts at Sukiasyan’s family-owned Dzoragyugh Production Cooperative.

A document from the Hellenic Bank in Cyprus lists 15 transfers from one of the accounts, STR Emerald Limited, back to Dzoragyugh Production Cooperative totaling US$3,333,500 between August 8, 2010 and June 7, 2011.

It is unclear why the money was transferred. Requests from HETQ.am reporters for documents from Sierra Leone were not answered.

Police investigators say Sukiasyan failed to abide by the loan agreement conditions and the business plan he had presented. Exactly how and when Sukiasyan violated the loan conditions could not be determined.

Although Sukiasyan told investors he owned shares in the Sierra Leone mining company GMC Global (SL) Limited, his statement is disputed. Sukiasyan is entangled in a court case with Ruben Mkrtchyan, one of two GMC Global directors listed in a Sierra Leone court document.

While the actual ownership documents for GMC were not available, the court is holding Mkrtchyan responsible for the company and he described himself as a company director in an interview with HETQ.am.  STR Emerald, one of the companies that received money from the AmeriaBank, is owned by at least two partners of Mkrtchyan..

Mkrtchyan said he visited Armenia in 2010 to meet Sukiasyan and government officials.

““My impression was that Sukiasyan had arranged the meeting. The prime minister, (Archbishop) Kjoyan and Sukiasyan were present at the meeting… We understood that Ashot had complete support and the finances. All of it inspired confidence in us that the investments would actually take place.” 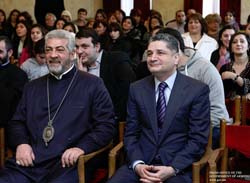 In Sukiasyan’s business plan for the mining operation, most of the $12 million from AmeriaBank was to be invested in equipment. Mkrtchyan, however, says Sukiasyan did not own shares in the company.

“[Sukiasyan] has no company in Sierra Leone. He was supposed to receive shares after making investments in the company. But he never received any shares since he didn’t even make half of the promised investment (of US$12 million),” Mkrtchyan said.

Mkrtchyan also said when he visited Armenia for a second time, he dropped off Sukiasyan and the Archbishop at the airport because they were travelling to Cyprus, where the money had ended up.

One of the charges levied against Sukiasyan is the “legalizing of large sums of illegally obtained income” (i.e., money laundering), using money borrowed from AmeriaBank.

According to company procedure, a representative of AmeriaBank should have traveled to travel to Sierra Leone to conduct an on-site check. At least two bank employees have been questioned in this case, but not Artak Hanesyan, chairman of the management board and general director of AmeriaBank.

The bank’s sole shareholder, Ameria Group CY, was registered offshore in Cyprus on July 23, 2007. (16) In August 2007, 96 percent of bank shares were obtained by TDA Holdings Limited, which was renamed Ameria Group (CY) Limited in November 2011, by which time the company had increased its stake to 99.9988997 percent.

Ameria Group CY Limited has only one shareholder—a company called Montrago Nominees Limited, registered in Cyprus. The only name on those documents is Androulla Papadopoulou, who is listed as an authorized representative.  HETQ.am could not locate this person.

The bank continues to sell off the assets that Hayrapetyan put up for collateral. Three properties have been purchased for US$700,000 by Bon Armenia, a company founded on June 25 and owned by John Sasoun Geledj, who told Hayrapetyan he had bought the properties. He is also a director and 49 percent owner of VKS Armenia Ltd., which operates Armenian textile factories in Yerevan, Vanadzor and Amasia.

According to documents sent to Hayrapetyan’s lawyer, Davit Setrakyan, son of Armenian National Assembly deputy Mher Setrakyan, has also purchased a property.  Hayrapetyan has published an open letter addressed to Armenian business people urging them not to purchase any of his properties either being directly sold off or auctioned by AmeriaBank.

“We’re not talking about US$10 or US$100 here,” Hayrapetyan said. “They pocketed US$11 million. It’s disappeared. Answers have to be given as to whom the money was given and how. Let them subpoena the prime minister and Kjoyan.”

Update: Armenian businessman Ashot Sukiasyan, after fleeing Armenia and eluding law enforcement for 18 months, was arrested on February 1 at the airport in Tbilisi, Georgia.