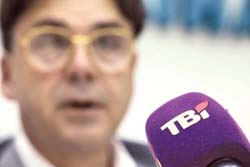 Alexander Altman was riding high when he announced on April 25 that he was the new owner of TVi, a takeover that prompted most journalists to quit the television station that specialized in hard-hitting investigations. But Altman is saying he was the victim of fraud. (Photo by Kostyantyn Chernichkin)

Four months after he walked into Ukraine’s TVi newsroom as a financial savior and “second breath” for the financially struggling channel, Alexandr Altman is crying foul.

“I do not accept that I am the controlling mind or the director (statutory, de facto or otherwise) of Balmore or any of the five Invest companies,” Altman now says of the interlocking maze of companies that last April took over a channel once praised for its independence and hard-hitting investigations.

In documents filed at the High Court of Justice in London on July 28, Altman claims his name was used in a series of filings with regulatory agencies in London “entirely without my knowledge or consent, and therefore fraudulently… I have no knowledge of how these companies were incorporated, who incorporated them, how they are run, or what they have done since they were incorporated.”

This latest upheaval at TVi had shed light on how offshore shell corporations are being used to gain control of a profitable or powerful media entity, while also obscuring the identities of those seeking that control.

Altman was front and center on April 23 when a mysterious group of new owners barred TVi’s former management from entering the building and announced they were taking control from Russian businessman Konstantin Kagalovsky, TVi’s co-founder.  Altman, an American businessman of Ukrainian descent, was presented as bringing with him “a flow of investments” to sustain the money-losing channel. 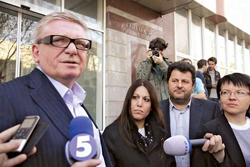 Konstantin Kagalovsky and Orthodoxia Nikia (R) deny issuing a power of attorney to Alexander Altman in front of TVi’s office in Kyiv in late April.

The channel has now been “resold” twice, following the assets’ freeze by High Court in London.

But Altman’s claim to ownership was anything but clear.  It was based on a power of attorney allegedly issued by Wilcox Ventures, a British Virgin Islands-registered company owned by Kagalovsky. Kagalovsky and Wilcox’s director, Orthodoxia Nikia, denied issuing any such letter to Altman.

The majority of those companies seem to be classic “shell” corporations run by proxy directors. Balmore’s Australian nominee director and shareholder, Rachel Amy Erickson, is listed in the UK company registry as running 124 active companies. When contacted by OCCRP, Erickson denied that the signature on Balmore’s incorporation documents was hers.

On May 21, Balmore’s filings with the UK registrar of companies showed that Erickson was replaced as Balmore’s director by Altman. Likewise, ownership of Balmore was transferred to five UK companies, all of which were registered on April 23--the same day Altman showed up to “save” TVi.

Also effective April 23 was the transfer of Balmore’s shares from Erickson to the five UK companies in equal shares: Invest Info One, Invest Rating Two, Invest Media Three, Invest Creative Four and Invest Active Five. In four of the companies the proxy shareholders and directors resigned on the same day – May 21 – and Altman took over.

Erickson is still a nominee director in Invest Active Five.   A nominee director is someone who stands in for the real director when a company is established.  Invest Info One was established by Ian Taylor, a notorious company registration agent from New Zealand who has created companies for organized crime, rogue states and terrorism groups. Invest Creative Four lists Angelique Elizabeth Lilley, who is unknown, as a director and shareholder.

Following the takeover, Kagalovsky filed a lawsuit in and the High Court of Justice in London against Altman, Balmore and the five companies that own Balmore.  In Ukraine, Kagalovsky filed suit against Media Info and Balmore.

On May 8, the London court barred Balmore from any transactions involving its share in Media Info. On May 17, the court likewise froze assets of the five companies, which by that time became owners of Balmore.

Yet on May 24, the channel was resold. Although UK shareholders of Media Info were under the freeze order, Media Info sold Teleradiosvit to Factoring Company Finance Group, a Kyiv company with one employee.

According to accounting data from Media Info, the sales price was US$66,443 which is equal to the statutory capital of Teleradiosvit. The data, captured by a screenshot from a Media Info computer displaying banking software, also records the company receiving almost $250,000 from Finance Group for “obtaining the rights to the debt.”

When an OCCRP journalist visited Finance Group at its registration address, the office – a room in a public library for the blind – was empty.

Finance Group is owned by Credit Investbanque PLC, registered in London at the same address shared by the five companies that own Balmore Invest.  Its directors are unknown German citizens Gunther Jens and Kuster Karsten, and the company is owned by two UK firms Boyle & Domes Invest and Great Fin-Hold Ltd.

Their registration documents show that these companies are owned by German citizens Steffen Foppe and Gunther Jens. On May 31, the London High Court barred Credit Investbanque from conducting any transactions involving TVi. On July 9, this company was dissolved by UK registration authorities.

Balmore and the five UK companies were created with the participation of the New Zealand company registration agent Taylor. After police discovered that some of the companies he created were used to launder money for Mexican drug cartels, Taylor was banned from registering any other companies in New Zealand.

Factoring Company Finance Group seems to be a proxy company itself in Ukraine.  Factoring is a form of debt purchasing where a company buys another company’s accounts receivable at a discount and then collects the money owed to make a profit. 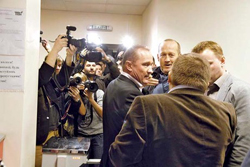 Ukrainian Bohdan Dankevych established it in April 2011. Dankevych, along with his partners Yaroslav Kontush (who was director of Finance Group when it was established) and Dmytro Nikiforov, specialize in creating holding companies which have been used to hide ownership of assets and to move assets offshore.

At the core of the operation lie the Stayling law firm and consulting company, that is owned by Omega, an investment agency established by Nikiforov.

Among Stayling’s clients are businesses close to Ukraine’s President Viktor Yanukovych. Specifically, it established Dominanta, a corporate investment fund. One of the fund’s shareholders in 2010-2012 was the limited liability company Tantalit, the firm that leases the land plot next to Yanukovych’s official residency Mezhyhirya.  In turn, Yanukovych has repeatedly denied knowledge of Tantalit’s beneficial owner prior to an August application to purchase it by Serhiy Kliuyev, his close political ally.

As if this weren’t confusing enough, on June 10, Balmore sued Media Info, the Ukrainian company that it owns, to cancel its own purchase of Media Info.

Despite the seeming absurdity, this method is often used in Ukraine to legalize company takeovers. Lawyers from both sides coordinate to ensure the plaintiff loses the case, so the plaintiff gets a court ruling that the transaction was “legitimate.” As of Sept.  13, the court hasn’t yet convened.

On June 27, the Ukrainian court restored the status quo by freezing Media Info’s assets as of May 23, prior to the sale of TVi to Finance Group.

Yet the freeze did not prevent a whole next wave of changes in the channel’s ownership structure.

At the beginning of July, Teleradiosvit was sold again. The new owner is Keyko Ukraine, a limited liability company registered in Vyshhorod, a Kyiv suburb. A month before this transaction, Keyko’s ownership structure was changed. Sixty percent of Keyko went to an Estonian company, Bellday OY—which had been established on April 22, a day before the prior TVi takeover.

Serhiy Kotenko, 29, is Keyko’s director and co-owner and now controls the remaining forty percent of the company. He has no known connection to the media business.

When asked by OCCRP about Keyko and TVi, Kotenko denied any involvement, saying that he knows nothing about being an owner of this company.

When an OCCRP reporter visited Keyko’s office in Vyshhorod, he found a locked room in an office building. Neighboring tenants said they’ve never seen anyone coming in or out of it. 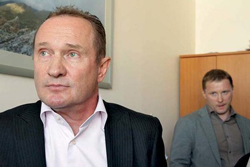 TVI managers Oleh Radchenko and Artem Shevchenko (R) during an April 23 standoff at the channel. (Photo by Mustafa Nayyem)

With all of these intricate transactions, it’s been easy to forget about Altman.

In an affidavit submitted to London’s High Court on July 28, Altman, who just four months ago called himself the channel’s beneficiary owner, promising significant investments into its development, said he was made the channel’s owner “fraudulently.”

“My unequivocal position… is that the documents filed electronically at Companies House between 14 and 28 May 2013, which appear to record my consent to becoming a director of the First Respondent (Balmore) and the Second to Sixth Respondents (the “five Invest companies”), as well as the named shareholder of the five Invest companies, were filed entirely without my knowledge or consent, and therefore fraudulently,” he states.

According to Altman, he was surprised by the scandal that erupted after the change of ownership at TVi, as he was told by TVi’s executive Oleh Radchenko that the changes had been sanctioned by Kagalovsky, the channel’s former owner. He said he did agree to become TVi’s beneficial owner, but thought the transactions would involve some existing offshore entities, and not UK structures, registered in his own name.

“The Claimants (Kagalovsky and Wilcox) say that they have been the victims of fraud. I do not know whether or not this is the case, and my understanding is that this is ultimately the matter for the Ukrainian courts. What I do know, however, is that I have been deceived,” Altman said in an affidavit. “I would be more than happy to be put back in the position I was in before I was approached by Mr. Radchenko in April of this year.”

Reporting for OCCRP, Denys Bigus is a former member of TVi's investigative team and the station’s Tender News and Exclamation Mark programs.