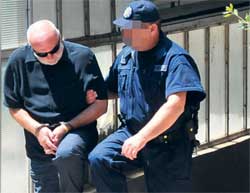 Slobodan Šaranović, brother of Montenegro criminal Branislav Šaranović, who was murdered in 2009, has been arrested in Budva, according to the daily newspaper Vijesti.

Also arrested was Ratko Koljenšić from Nikšić. The two are wanted in Belgrade on suspicion of murder and creating a criminal organization.  An investigative judge of the Supreme Court in Podgorica ordered detention for the purposes of extradition that can last up to six months.

Serbian Police Director Milorad Veljović told the publication Blic that the two are suspected of arranging the murder of Nikola Bojović, the brother of Serbian criminal Luka Bojović, and of preparing a series of other murders in Serbia and Montenegro.

Luka Bojović, who was sentenced in Serbia for ordering several murders himself, was arrested in Spain in early 2012 and is in jail pending extradition. His brother Nikola, according to available court documentation, was not believed to be widely involved in criminal activities.

Bojović was murdered in May 2013 at a downtown Belgrade bakery.  An unidentified attacker approached him from behind and fired several shots from a handgun.

Slobodan is the older brother of Branislav Šaranović, known to Serbian police as a member of the Montenegrin mafia. He also was linked to an international cocaine smuggling ring known as “Group America.“  After his spectacular escape from a German prison in the 1980s, where he was serving an eight and a half year sentence for extortion, Šaranović ran gambling houses and casinos in Serbia. He was murdered in Belgrade in 2009, when unknown attackers gunned him down with automatic weapons in front of the building where he lived.

Soon after, his brother Slobodan put up a poster in the shopping window of his currency exchange shop in Belgrade with his brother’s picture offering a reward for any information leading to his brother’s murderers.

“I swear with my honor and name that I will not only forgive the direct murderers of my brother Branislav, but I hereby publically guarantee with my own life and lives of my close family members that I will not report them to police or prosecute them in any way if they decide to confide in me the correct and confidential information: who contacted them first, in what way they were recruited, who paid them, who ordered this operation and for whose benefit they did it? This guarantee also refers to my strong promise that for this described information they will be awarded money in the amount of 6 (six) digits in euros,“ said the message.

Slobodan Šaranović owns several companies in Serbia, including Lutrijafilnik, a gambling business, and 40 u kamenje p, a currency exchange.  He also owned Filnik, a company headquartered in Vienna, involved in gambling. In Montenegro, he owns Slobšar&Cok in Budva, through which he controlled the company Quercus in Podgorica, that dissolved in 2008.

Link with Ivica Tončev, Advisor to the Serbian Prime Minister

The Center for Investigative Reporting in Serbia (CINS) has written about Branislav Šaranović’s businesses in Serbia and Austria.  In February 2013 during that investigation, CINS found that Branislav owned the company Fil-Šar in Vienna, through which he managed casinos in Belgrade, Aleksandrovac and Kruševac.

CINS collected business documentation which shows that Tončev remained general manager of the company, after he sold it to Šaranović and took a job in the Serbian government.  Tončev left the company in August 2009, two months before the new owner was murdered. After Branislav’s death, the Šaranović’ family inherited ownership of the company, but Tončev still officially manages the representative office of Fil-Šar in Belgrade.

In late June Tončev told CINS said that he met Šaranović in 2006 when he sold him the company. He said he was only formally the general manager, because Šaranović needed somebody who lived in Vienna to receive mail for the company.

To read more about business relations of Branislav Šaranović and Ivica Tončev go to the following links: