The EU has funded surveillance and patrol equipment worth more than 2 million euros for the benefit of Belarusian border authorities implicated in rights abuses, a Danwatch and OCCRP probe into EU-funded tenders and contracts shows.

Human Rights Watch has decried the regime’s crackdown on civil society in 2017, describing it as “the broadest wave of arrests of peaceful protesters since 2010.”

Amnesty International has accused the government of employing violence against peaceful protesters in 2018, and noted that “heavy legislative restrictions on media, NGOs, political parties and public assemblies remained in place.”

According to UN Special Rapporteur on Human Rights in Belarus, Miklós Haraszti, “Belarus continues to be governed by a deeply entrenched repressive legal framework, which is aggravated by cyclically recurring waves of massive violent repression against those who attempt to claim their human rights.”

These are among the reasons for the EU’s embargo of Belarus, which prohibits the supply of equipment that may be used for political repression. The embargo, which the European Council last renewed in February 2018, prohibits the sale, supply, transfer, or export of any such equipment, as well as its financing.

However, in an effort to curb migration, the EU has also provided training and border control equipment to authorities in countries along its eastern borders. This includes Belarus, which between 2015 and 2017 received over 2 million euros’ worth of vehicles and equipment from the EU in order to better detect people crossing in and out of the country.

The State Border Committee of the Republic of Belarus (SBC), which received the EU surveillance equipment, has been accused of playing a role in the repression of the regime’s critics by harassing human rights and labor activists trying to enter and leave the country.

(Read more about the SBC’s repression of dissidents.)

In apparent contravention of international law, SBC guards have also been accused of sending refugees back into the arms of the governments that repressed them. Videos posted on the SBC’s own YouTube account show border officers violently apprehending groups of people the agency describes as illegal migrants.

Human rights advocates say that the EU may be indirectly contributing to these violations.

“We have seen human rights abuses linked to surveillance in Belarus, and we have seen abuses of the rights of asylum seekers and migrants,” said Joshua Franco, a senior research advisor at Amnesty International focusing on issues of technology and human rights.

“The EU is sacrificing human rights in the eagerness to limit migrants and refugees from reaching the EU,” he said. “It is a worrying trend.” 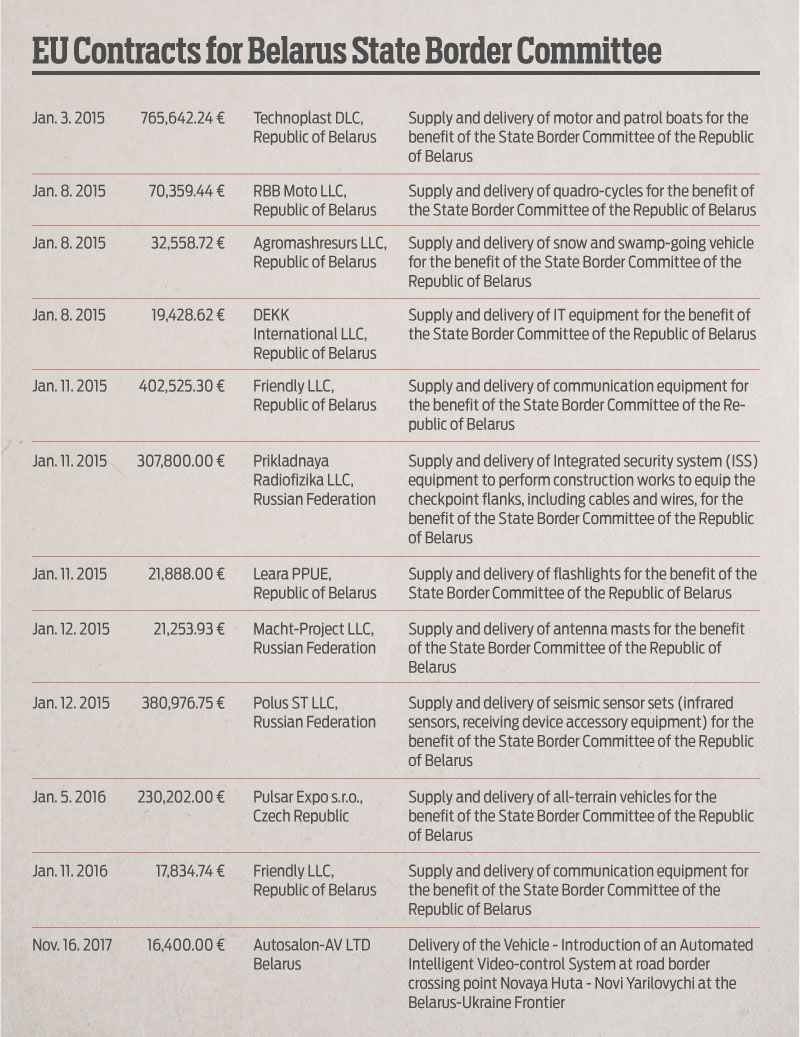 The equipment was supplied as part of an EU program to strengthen local authorities’ surveillance capacity along the border between Belarus and Ukraine, with the goal of preventing migrants from reaching EU territory.

The UN’s International Organization for Migration, which was hired by the EU to carry out the project, procured the surveillance and patrol equipment from Belarusian and Russian security companies.

Martin Lemberg-Pedersen, an assistant professor at Aalborg University in Denmark, has carried out extensive research into the EU’s policy of supplying non-EU countries with border control equipment.

“The type of equipment that is supplied does not distinguish between a citizen, a migrant or a refugee,” he said.

“It is not only used to target refugees and migrants – this is totalitarian infrastructure that gives regimes, like the one in Belarus, the possibility to surveil everyone within its borders, including its own citizens. And Belarus is a regime with a long track record of violating the fundamental rights which the EU claims to uphold.”

Franco of Amnesty International argues that the EU has a responsibility to ensure that its border control efforts don’t facilitate human rights abuses.

This can happen in numerous ways.

“If the equipment is delivered to borders, there is the risk of push-back of asylum seekers,” Franco said. “In terms of internal repression, surveillance in general has a chilling effect on civil society. It is all conducted in secrecy, and the fact that no one can know, when they are subject to surveillance, causes people to self-censor.”

In response to reporters’ inquiries, Anton Bychkovskiy, a spokesman for the SBC, said guards were within their rights to search people crossing into or out of the country.

“The border guard officers operated within the framework of the law, in accordance with established procedures that are within their competence,” he wrote in an email.

“It is also a common European and world border guard practice. Further inspections and decisions regarding each particular case are beyond the competence of the border guard service.”

Bychkovskiy also noted the EU-funded equipment was only being used along the Belarus-Ukraine border.

Treatment of Migrants a “Concern”

Belarus also shares a land border with Poland, an EU nation, and for many years it has served as a transit country for refugees travelling to Europe in search of asylum. Many come from Russia, especially from Chechnya.

In May 2018, the SBC posted a video on its YouTube page showing officers detaining a group of Afghan and Indian migrants who had crossed into Belarus from Russia illegally in an attempt to reach the EU.

The video shows hooded border guards aggressively detaining the migrants in an operation that was carried out in cooperation with the Russian Federal Security Service (FSB), according to the SBC.

In another video, posted in April 2018, a Belarusian border guard runs toward a car on a stretch of road close to Minsk. The car’s passengers are described in the caption as migrants. They appear to be unarmed. With a gun raised, a border guard shouts at the migrants to show their hands before breaking the car window with the gun. Border guards proceed to pull the migrants out of the car, handcuff them, and make them lie on the side of the road.

“The videos are frightening to watch,” said Lemberg-Pedersen, adding that the footage should “cause concern” among EU leaders.

“If this is how Belarusian border police act against migrants, then the EU and its member states are equipping a regime that showcases its ‘shoot first, ask later’ control practice against migrants and refugees.”

Anton Bychkovskiy of the SBC defended the conduct of border officers as legal, and said they had acted under the belief that the car was transporting victims of trafficking.

“As for the video showing the detainment of persons in a car, Belarusian officers acted in strict accordance with the law, because the border guards had information concerning the committing of serious criminal offense related to illegal migration and human trafficking,” he wrote.

“Before starting the investigation (interviewing detainees), it was not possible to identify victims, organizers and facilitators of this heinous crime.”

The migrants in these videos are not alone.

According to Amnesty International, Belarus lacks “a functioning asylum system and repeatedly handed over individuals seeking international protection to authorities of countries where they were at real risk of torture or other ill-treatment.”

Refugees from Chechnya, a Russian republic where human rights organizations and media outlets have documented torture and disappearances, have also suffered rough treatment at the hands of the Belarus border guards.

The Organized Crime and Corruption Reporting Project (OCCRP) and Danwatch have examined two cases in which Belarusian border guards ignored requests for asylum from fleeing Chechens and instead returned them to Russia.

According to Josephine Liebl, head of international advocacy at the European Council on Refugees and Exiles, this practice directly violates international refugee law, which stipulates that states must allow people seeking protection within their borders to register an asylum claim.

The return of Chechens to Russian authorities is also a violation of the principle of “non-refoulement,” a cornerstone of international refugee protection and human rights law, Liebl said.

The principle prohibits sending asylum-seekers back to a country if there is reason to believe they would be at risk of persecution or torture.

“While we do not know the exact facts of the case, the practice of Belarusian border guards handing over Chechens to Russian authorities without giving them the opportunity to claim asylum in Belarus violates the principle of non-refoulement,” she said.

Violating Its Own Embargo?

By supplying surveillance and patrol equipment to the Belarusian regime, the EU may be violating its own embargo, experts say.

🔗The Embargo Against Belarus

The EU’s embargo against Belarus, which dates to 2011, prohibits the export, supply, sale, or financing of arms and equipment that may be used for internal repression.

The embargo was last renewed in February 2018.

Most problematic is the supply of infrared surveillance cameras, as the EU embargo prohibits the supply of “night vision and thermal imaging equipment” to Belarus.

The cameras, which according to tender documents can detect people up to 110 meters away, were delivered as part of a 380,900 euro contract with a Russian security company.

“The IR surveillance cameras risk violating the embargo, dependending on the technical specifics of the delivered equipment, since they enable night vision or low light surveillance,” says Peter Danssaert, an expert in the arms trade and defense logistics at the International Peace Information Service. Danssaert has worked as a consultant to both the EU and the UN.

Another defense analyst, Jon Hawkes from the British defense research agency Jane’s, also said that he would expect infrared surveillance cameras to fall under the embargo.

“I would say that a device listed as ‘video surveillance IP-cameras with infrared illumination’ could be something I would expect to fall within the classification of ‘Night vision, thermal imaging equipment and image intensifier tubes,’” he wrote. “However this is subject to clearer identification of the equipment.”

Reporters asked the European Commission whether the EU’s supply of equipment to Belarusian border authorities risked contributing to internal repression or human rights violations against refugees.

In an email, Alceo Smerilli, press officer at the European Neighborhood Policy & Enlargement Negotiations and for EU Foreign Affairs and Security Policy, said the program, known as SURCAP II (for “surveillance capacity”), focused on stopping trafficking and smuggling as well as migration.

He underscored that human-rights training was built in to the program in an effort to ensure that border guards who received equipment knew how to respect the rights of migrants.

“The focus of the SURCAP II program is on enhancing security levels on the Belarusian-Ukrainian border as regards notably irregular migration, smuggling of goods (alcohol, tobacco, and drugs), human trafficking, and organized crime,” he said.

“It also aims at promoting respect for human rights, such as rights of migrants, asylum-seekers, victims of trafficking and smuggling in persons. Trainings and study visits were organized to a number of EU Member States to learn from the best EU practices in working with irregular migrants (including on how to ensure respect for human rights).”

However, Lemberg-Pedersen argues that there is a contradiction between the EU’s professed support for human rights and its actions in recent years.

“Criticism of the EU’s policy of supplying border control equipment to police states or states with poor human rights records is not new,” he said. “But instead of ending the support, European countries have chosen to escalate their support to a string of problematic regimes, such as Egypt, Libya, Algeria, Morocco, Turkey, or Saudi Arabia, over the past decade.”

“It therefore seems an awful lot like window-dressing when the EU, on one hand, talks about fundamental rights, while simultaneously increasing its involvement with countries and regimes that act in direct violation of these same rights,” he added.

With research by Johanne Rübner Hansen.

This investigation was financially supported by a grant from the IJ4EU fund.