The human rights situation in Belarus has been steadily declining since President Alexander Lukashenko took power in 1994. Political opponents, bloggers, independent journalists and trade unionists, and human rights activists are among those who have been persecuted.

The regime has developed many tactics to pressure its critics, from imposing fines on peaceful protesters to imprisoning opposition leaders on spurious charges. One common form of harassment is stopping flagged individuals at border crossings, most often when they attempt to return to Belarus from abroad.

These stops are carried out by the Belarusian State Border Committee (SBC), which received surveillance equipment worth more than 2 million euros — including infrared cameras, communications equipment, and patrol vehicles — from the EU between 2015 and 2017. (See main story.)

SBC border checks can include complete searches of activists’ private belongings and communication equipment, and in extreme cases even strip-searches.

Andrej Stryzhak says he’s been stopped and searched at border checkpoints four times in the past two years. Stryzhak, the vice-chair of a local division of the Belarusian Radio and Electronics Industry Workers’ Union (REP), an independent trade union that has been targeted by authorities, was told each time that he was being stopped randomly, but he believes this is unlikely.

“I regard this as persecution for my professional activities and as an act of pressure. There is no practical sense in stopping a person at the border four times in a row,” Stryzhak said. 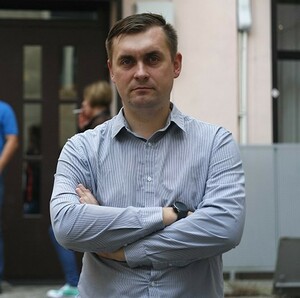 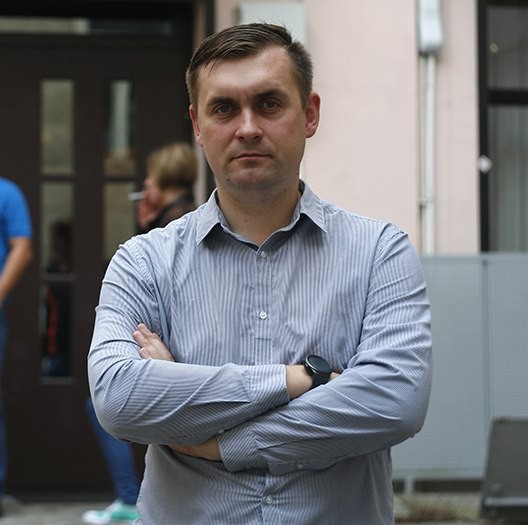 In collaboration with the Organized Crime and Corruption Reporting Project (OCCRP), Danwatch examined 28 instances between 2012 and 2018 when dissidents were subject to border searches.

The border stops usually coincide with waves of persecution against certain groups. For example, Andrej Stryzhak experienced border searches after REP leaders were charged in August 2017 for evading 10,000 euros in taxes after allegedly receiving a financial contribution from the Danish trade union 3F. The charges were a result of Belarusian legislation aiming to limit NGOs from receiving financial aid from abroad.

More than 800 trade union members were interrogated during the investigation, which REP and the International Trade Union Confederation have said was politically motivated, designed to discredit the union and limit its activities.

Although Andrej Stryzhak was told the repeated border searches were random, he says that he now knows for a fact that they were not.

“I found out during the trial against REP’s leadership that there was a request from an investigator to subject certain people to a special inspection at border controls. Among these people were me and my wife,” he says.

The harassment of dissidents at border points in Belarus has been noticed abroad.

In its 2017 human rights report on Belarus, the US Department of State noted that “security forces continued to target prominent opposition and civil society leaders with arbitrary searches and interrogations at border crossings and airports.”

The report identifies a case in which border officers searched the belongings of a prominent opposition politician and confiscated his flash drives.

The search or seizure of technical devices and communication equipment is especially worrisome, according to Joshua Franco, a senior research advisor at Amnesty International, who has carried out research on Belarusian surveillance.

“Device search is a type of surveillance that is very invasive. If the authorities gain access to your computer or your phone, it can reveal a lot, especially in a country like Belarus, where you penalize political opposition,” Franco said.

Dissidents have said that they have seen their names marked with red on the computer screens used by the SBC.

“The border guards have a database where they receive alerts during passport checks,” Andrej Stryzhak said. “Sometimes it’s possible to peek at the screen of the passport scanning devices. A red or an orange light appears with text detailing what to do with the person. Usually, it is an inspection or seizure of certain things — for example, valuables, money, or electronic devices.”

Maria Rabkova, a political activist who has been stopped twice at border crossings over the past two years, has had similar experiences.

“When you give your passport, you can see on the border guard’s face that something is wrong,” she said. “Then they call a superior. When I ask what’s wrong, they say that they can’t disclose this information.”

Rabkova believes that she was placed on a government database of extremists after she was identified as a suspect in a criminal case that was opened after unidentified people threw paint at the building of the state-owned media corporation, Belteleradiocompania. The case against her was eventually dropped.

“All activists who have ever attracted the attention of Belarusian security services are being stopped at the borders,” said Rabkova.

Her story is similar to the one told by Lena, a political activist who asked to be identified only by her first name to avoid professional repercussions.

In March 2017, she was detained in Minsk in advance of opposition rallies that were shut down by the authorities. Since June 2017, she has been stopped and searched by border agents on six separate occasions, according to documents seen by OCCRP.

“I don’t know if they want to exert moral pressure, or demonstrate that we are watched over,” she said, adding that the stops are a “big stress.”

“Usually, when you go through a passport control, border guards separate you and tell you to wait. Then they check the passports of all the other passengers on the bus, and the bus leaves. You remain at the border crossing, and you are not told what is happening.”

The first time was the worst, Lena said, because she had no idea what to expect or how long she would be detained.

“It was not at all clear to me what would happen,” she said. “The last two times, I embraced the stops with a laugh. And I make sure not to buy a direct ticket back to Minsk when I travel, in order not to lose too much money if I get stopped at the border.” 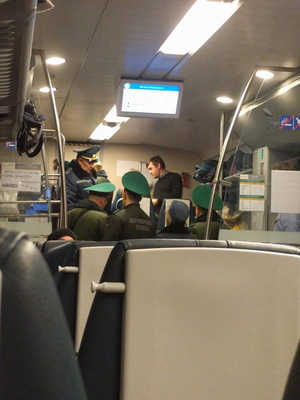 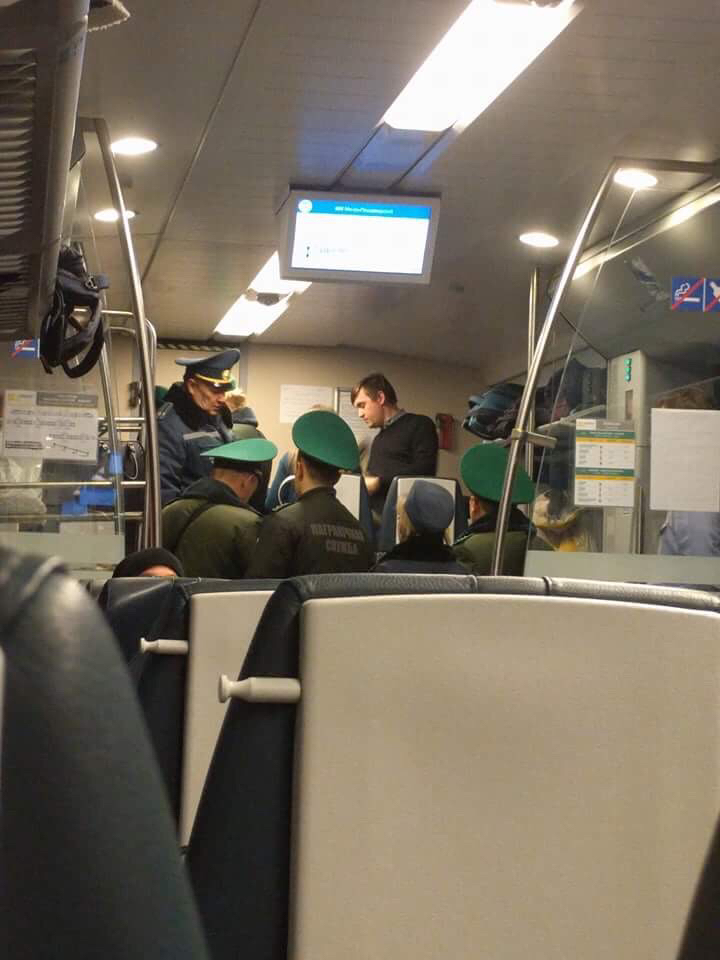 Credit: Nasta Loika Andrej Stryzhak was taken off the train from Vilnius to Minsk on March 23, 2018.

Stripped to Their Underwear

After border guards receive an alert, a detainee is handed over to officers of another agency, the State Customs Committee, who then conducts inspections, searches, and confiscations, Lena explained.

“You are taken to a separate room. There the officers very thoroughly inspect all of your belongings,” she said.

“Then you are ordered to undress until you remain only in your underwear, and they look through your clothes, probe the seams, and knock the soles of the shoes. Twice they confiscated my books, but then, after some time, they returned them to me. Last time, I wasn’t allowed to go to the toilet until the officers had finished with the personal inspection.”

Andrej Stryzhak also describes being forced to strip to his underwear. He regards the border searches primarily as a means to demoralize dissidents.

“I don’t think the main purpose is to get information. When you’ve been stopped once, you understand that you must travel ‘clean.’ That’s why I assume that the aim of the border stops is to apply pressure, to demoralize you and obstruct your work,” he said.

In response to the activists’ claims, Anton Bychkovskiy, spokesman for the State Border Committee of the Republic of Belarus, said that all stops at checkpoints are carried out in compliance with Belarusian law.

“Regarding the inspections at checkpoints and detentions of persons, border guard officers operated within the framework of the law, in accordance with established procedures that are within their competence,” he wrote in an email.

“It is also a common European and world border guard practice. Further inspections and decisions regarding each particular case are beyond the competence of the border guard service. If any person reasonably believes that he was mistreated, then he has the right to file a complaint, which will be necessarily considered.”

With research by Johanne Rübner Hansen.

Disclosure: Mikita Matsiushchankau, a co-author of this story, was previously a lawyer who worked with Human Constanta, a Belarusian human rights organization.

This investigation was financially supported by a grant from the IJ4EU fund.