A brief Parliamentary exchange between Liberal Prime Minister Justin Trudeau and the leader of the New Democratic Party, Jagmeet Singh, on Tuesday provides a glimpse into the politicization of the country’s money laundering crisis, whose depth and scale, while a longtime “open secret”, was only more recently made public. 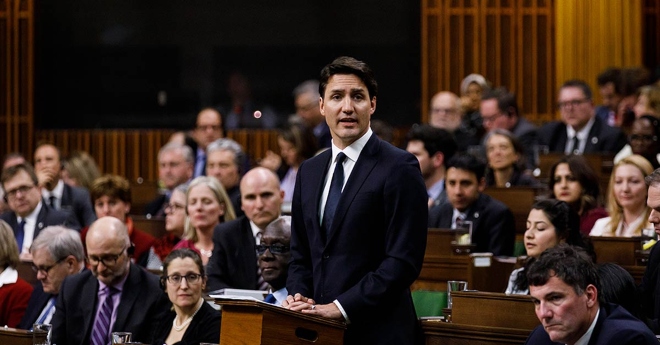 (Canadian Parliament / Liberal Party of Canada)“Money laundering in [British Columbia] and across Canada is one of the reasons housing has become so unaffordable, and it has also fueled organized crime,” Singh began.

The transaction, which Singh referred to as “secretive,” involved a “bare trust” deal; an exchange that enables shady investors to obscure their land ownership. British Columbia is the only Canadian province that continues to allow such deals.

Tam has been called the “poster child” for British Columbia’s money laundering scandal, and is seen as one of the original architects of the “Vancouver model” for trans-national crime - where sales from illegal drugs manufactured in China are “laundered” through British Columbia.

As reported by Global News in May, Tam has been investigated by Canadian law enforcement since 1991 and has been accused of heroin trafficking, running a chemical drug lab, and of being a “‘known loan shark’ with a history of violence”.

Though the deal Singh called out in Parliament would have been technically legal at the time, the concern is that an MP’s law firm knowingly helped an infamous alleged criminal and money launderer because it stood to financially benefit.

British Columbia’s May Combating Money Laundering Report estimated that in just one year over $7 billion were laundered through metro Vancouver’s real estate market, and linked this to the housing affordability crisis that saw prices in Vancouver rise by nearly 30% a year at one point.

The Liberal, New Democratic, and Conservative Parties, led by Trudeau, Singh, and Andrew Scheer respectively, will be going head to head in Canada’s upcoming Oct 21 general elections, the election season for which should begin towards the end of the summer.

As that date inches closer, and as Canada’s money laundering revelations make internationalheadlines, the way the country’s major parties will address the crisis in their 2019 platforms is emerging.

Peschisolido has told reporters that he has never been involved with a “bare trust” exchange, and firmly stated that he does not believe he is responsible for a transaction that was carried out by another lawyer while he was at the firm.

In Parliament on Tuesday, Trudeau did not directly respond to the Peschisolido’s case that Singh raised, but did take the opportunity to emphasize the Liberal Party’s anti-money laundering policies and actions.

He pointed towards the Action Coordination and Enforcement Team and the Money Laundering Center of Expertise that were included in his 2019 budget. He also added that the Liberal government has provided over CAD$160 million (US$120 million) to the Royal Canadian Mounted Police (RCMP) and Fintrac, Canada’s financial intelligence unit.

“Whereas the Conservatives cut over $500 million dollars (US$375 million)from the RCMP, we’reensuring that our law enforcement teams have the resources they need,” Trudeau said.

The Peschisolido case was brought up in Parliament again on Wednesday by Conservative MP Peter Kent, who raised the issue of legal professionals aiding and abetting money laundering. He asked if Peschisolido had ever tried to influence decision-making related to “bare trust” deals, money laundering laws, or Fintrac reporting.

Again, the Liberal Party did not directly answer this question.

Liberal MP Bill Blair, who also serves as the Minister of Border Security and Organized Crime Reduction, reiterated that the previous Conservative government’s budget cuts to the RCMP left law enforcement without the resources they needed to investigate and address its money laundering.

“Working closely with the province of British Columbia, we are going to make a difference,” Blair said.