Albania’s governing Socialist Party called for the impeachment of President Ilir Meta, a former party member, on Monday because of his decision to call off the country’s upcoming municipal elections and therefore side with the opposition who have organized months-long anti-government protests. 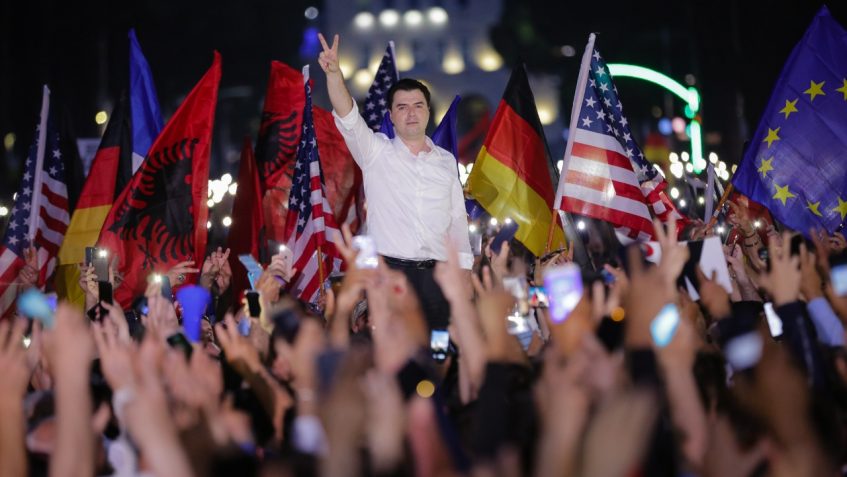 Lulzim Basha at protests (source: Partia Demokratike) Since February, Albania’s opposition parties have accused the governing party of corruption and of doctoring the results of the 2017 parliamentary election.

Leader of the center-right opposition party, Lulzim Basha, accused the Socialists of coming into power “through the votes of the crime and the mafia.” Basha’s Democratic Party relinquished their seats in Parliament in protest, and declared a boycott of the June 30 vote.

Thousands flooded the streets of Tirana on Saturday armed with flares, firecrackers, and smoke bombs, reiterating the opposition’s calls for Socialist Party leader and Albanian Prime Minister Edi Rama’s resignation, the creation of a transitional cabinet, and an earlier general election.

On Saturday, President Meta called off the June 30 vote, explaining that elections without opposition would not be democratic and would harm Albania’s path towards European Union membership.

At Saturday’s protest, Basha called President Meta’s postponement of elections the "first result of our battle against Edi Rama", and urged citizens to continue their protest until Rama steps down.

On Monday, Meta’s office released a second lengthy statement explaining the constitutional basis for his decision and saying that holding elections as planned would create “the risk of a civil conflict, which poses a serious risk to life impairment and the health of the citizens, the democratic stability of the country, the unity of the people and the constitutional order.”

However, on the same day, Elisa Spiropali, the Socialist Party’s spokesperson, called Meta’s decision to call off elections unconstitutional and a “brutal attack” on the Republic.

She explained to the press that the proceedings to dismiss Meta from his position as President will begin at the Parliament’s plenary session on Thursday.

In their statement to the press, the governing party reiterated that elections will continue as planned on Jun. 30.