Twitter and Frustration Drive A Push to Stop Lawmakers from Lobbying

The “revolving door” of US legislators leaving their offices to become lobbyists might soon come to a halt, thanks to increased public awareness and an odd Twitter exchange this week. 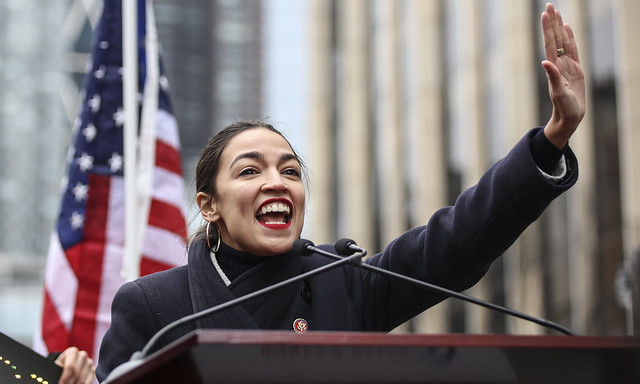 Alexandria Ocasio-Cortez (By Dimitri Rodriguez CC By 2.0) A report from Public Citizen found that nearly two out of three members of the last session of congress who retired or were not reelected are now working as lobbyists or otherwise influence federal policy. They utilize their years in office and close connections with representatives to push for changes in financial, defense, energy, healthcare, and other policies on the behalf of various industries.

“By going through Washington’s ‘revolving door,’ lawmakers are effectively trading in on their relationships and knowledge to help companies profit and to enrich themselves – a pattern that has been in place for many years,” the report reads.

A famous example of the impact of lobbying comes from former Representative Billy Tauzin, who made more than $11 million in a single year working for a pharmaceutical lobbying group. While in congress he pioneered a bill that prevented Medicare from negotiating lower drug prices, a major win for pharmaceutical industries, and then cashed out with the same interests he assisted in congress.

Though former members of the Senate and the House are barred from lobbying congress for two years and one year respectively, they often start their private sector careers by lobbying the Presidential administration instead, later moving back to their old stomping grounds.

Democratic Congressional Representative Alexandria Ocasio-Cortez cited this report in a tweet, pushing for laws to be enacted to stop the congress-to-lobbyist pipeline.

In a highly unusual move Republican Senator Ted Cruz positively responded to her tweet, agreeing with her idea and citing his history of pushing for the change.

“The Swamp would hate it, but perhaps a chance for some bipartisan cooperation?” Cruz pondered, referencing Donald Trump’s campaign rhetoric.

The exchange continued, with Cortez and Cruz eventually reaching an agreement to pass a “clean” bill without added amendments. They even gained the support of Senator Brian Schatz and Representative Chip Roy, creating two pairs of bipartisan supporters in both parts of the legislature.

Presidential hopeful Senator Elizabeth Warren proposed legislation in February that would create a lifetime ban on lobbying for federal officials. Representative Trey Hollingsworth put forward a similar bill around the same time that would additionally punish those who attempted to influence legislation without registering as a lobbyist, a somewhat common practice.

The Council of Europe’s Group of States Against Corruption (GRECO) also published a report earlier this spring condemning the practices of American lawmakers, recommending that congress take action to prevent the “revolving door” from continuing to spin.